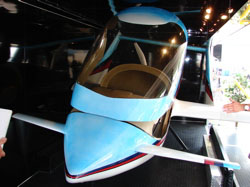 Mostly obscure since its debut at the 1991 EAA Convention in Oshkosh, the Discovery kit aircraft now has new life due to new company ownership. Aero Concepts of Rock Hill, South Carolina, has resurrected this unusually efficient, three-winged canard two-seat pusher, and is back on the convention circuit with the original prototype (now exhibited as a full scale mock-up). Aero Concepts has even retained the original test pilot, Earl Hibler, to assist in aircraft development and testing before offering kits for sale. The company is taking deposits. www.itsdiscovery.com 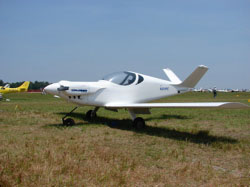 Out on the flight line during Sun N Fun was the prototype Personal Cruiser, a kit entering production from Pro Composites, Inc. This inexpensive ($8995 for the basic kit) airplane uses simple Fold-A-Plane composite technology to form curved skins in wooden forms to achieve its compound curves and svelte looks. The prototype is now flying with a converted Corvair automotive engine, and is cruising at 110 mph while using only 3 gph. With a 1250-pound maximum gross weight, the Personal Cruiser has a high cruise speed of 140 mph and a maximum rate of climb of 1700 fpm. Build time is said to be 600-800 hours with an estimated completed price of $17,250 to $28,275. www.pro-composites.com

To Launch A Light Sport

Bob Fritz - July 19, 2008
0
Author Bob Fritz got the bad news that he would likely not pass his FAA medical and was faced with a choice: Finish the RV he was working on and resign himself to flying with a partner, or try to find a suitable Light Sport Aircraft that he could build and fly solo. In this first installment in the series, he details his search for the right design and reveals the decision he ultimately made.

Mel Asberry - April 21, 2013
0
Is an aircraft’s empty weight required on the data plate? Does the gross weight change when an LSA is converted from conventional landing gear to floats? Should engine maintenance be entered in the builder’s logbook? Does the Minimax still qualify as an ultralight?