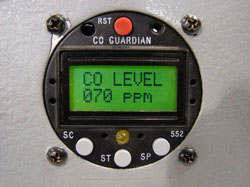 Have a dead clock in your panel?  Heres a great replacement that features many other functions and enhances flight safety as well with sensitive carbon monoxide (CO) detection. The Aero-553 from CO Guardian not only tells local and Zulu time (including stopwatch and flight timer), but also monitors buss voltage, internal and external temperatures, density altitude, and cabin pressure.  However, its most dedicated feature is as a CO monitor that will detect as low as one part per million, and accurately display exactly how much CO is sneaking into your cabin.  Show priced at $695.00.  www.guardianavionics.com 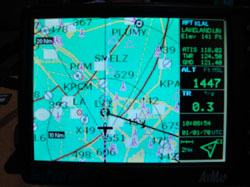 The new GeoPilot from AvMap Navigation looks a lot like its bigger brother (the EKP IV), but in a slightly smaller package with a diagonal LCD screen dimension of 5.6 inches.  The Geo Pilot has most of the features of the EKP IV, including a preloaded Jeppesen database, virtual HSI, stored flight plans, and terrain and obstacle depictions, but adds automobile navigation capability with terrestrial mapping.  Although the TFT LCD display isn’t quite as crisp as the EKP IV, the GeoPilot is priced significantly less at $995.00  www.avmap.us