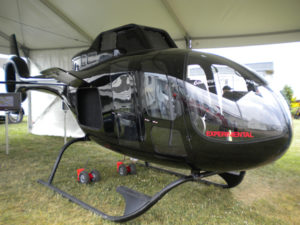 After seven years of development, Peter and Leanne Maloney of Composite Helicopters made their first appearance at AirVenture to promote their five to six place kit helicopter, the KC518 Adventourer. Carbon fiber and Kevlar composite construction with power from a single turbine engine (either the RR250 C20B/J or the RR250 C18/T63) make for a potentially impressive package, though the helicopter will not fly for the first time until August or September.

The Mahoneys are working toward certification with both New Zealand’s Civil Aviation Authority (CAA) and the FAA, and they intend to continue manufacturing and supporting kits, which will only benefit from the certification process, Peter Mahoney said. 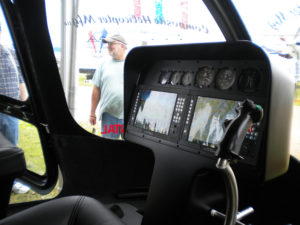 The company plans to have U.S. distributorship with staff who will be able to provide initial flight testing and transition training, though it’s recommended that customers who may not already be currently licensed to fly a helicopter get training in a Robinson before piloting the Adventourer.

One of the strengths of this kit, the company says, is its unique “frameless airframe,” which is designed and engineered to be assembled from the outside in in a specific predetermined order.

Based on preliminary design data with the C20B/J engine, performance specifications are estimated to include a 135-knot cruise speed, 3.6 hour endurance (on standard tanks) and 5.26-hour endurance with auxiliary tanks, though as Mahoney points out, that’s more than most pilots and passengers would want at one stretch. The hover ceiling (IGE) is expected to be more than 10,000 feet, rate of climb more than 1000 feet per minute, and maximum operating altitude 14,000 feet. 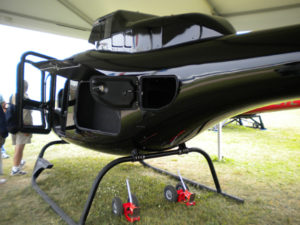 With the C20 engine, the max gross weight of the helicopter will be 3200 pounds, and the empty weight 1750 pounds, leaving a useful load of 1450 pounds. The left and right storage lockers have 9 cubic feet of space each, and an aft storage locker has 9.6 cubic feet. There is literally enough room to stow a surfboard and a lot more.

The cockpit will have dual controls, and the panel will have dual EFIS displays, though which type was not specified. A cargo swing, spray system, tinted windows, and doors with upper and/or lower windows are options.

The basic kit price is $335,000, and the quickbuild option adds $44,500. The estimated completed price of the Adventourer is $395,000. Customer visits to the New Zealand factory are encouraged.

For more information, visit www.compositehelicopter.com. The Composite Helicopter display at AirVenture is in front of Hangar D.