On Sunday, Tom Glaeser, Dick Lemons and the author got a chance to do their three-plane, loose-route smoke pass.

Editors Note: Master storyteller-we wont call him the consummate BSer, even if his friends do-Dick Starks submitted this story in the second half of 2009 and, well, events overtook us. To say nothing of AirVenture. But this is too good a story to let die on the vine, so take a baby step back in time with us, Dick, Sharon and the rest of the Dawn Patrol.

Eastbound and down, 38 wheels a turnin. We gonna do what they say cant be done. We’ve got a long way to go and a short time to get there. Were eastbound, just watch them airplanes run.

Sharon was warbling cheerfully into the mic on the little walkie-talkies that we use between cars when were going down the road. The Dawn Patrol was on the prowl. Yep, the trailer weenies of Liberty Landing International Airport were booking east in a convoy of six WW-I planes on trailers. We were on a heading of zero-nine-zero on I-70 en route to an airshow. I was lead with Sharon’s new DH-2 replica on the big trailer, followed by the rest of the Dawn Patrol. Sharon was towing my Nieuport 11. Mark Pierce, Tom Glaeser and Dick Lemons were behind her with their Nieuports. Harvey Cleveland was bringing up the rear, towing the Morane Parasol. Thats one of the big perks about building and flying a WW-I replica. You get asked, no, begged, to bring them to airshows. In some cases, like the show we were heading to, they pay all of your expenses, too.

The Columbia, Missouri, Regional Airport Salute to Veterans Air Show is an annual event that the stalwart members of the Dawn Patrol have been going to for more than 12 years. It is the largest free airshow in the country, and we got to open the show with a salute to WW-I aviation. The announcer plays original WW-I music, while we fly in front of the crowd. Its a heck of a way to start the airshow season. 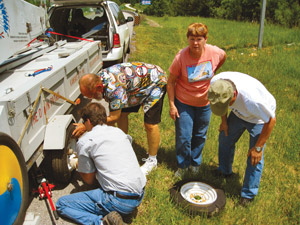 The pit crew in action. Harvey Cleveland and Dick Lemons finish installing the second spare. Sharon Starks wonders what will go wrong next. Tom Glaeser looks at the exploded tire.

Dick, I blew a trailer tire! The sudden scream over the walkie-talkie really ruined the mood. Sharon, who was in the middle of the convoy, had blown the left tire on the trailer she was towing. By the time I got the DH to the side of the road, she was already too far back for me to do anything but watch the action. The world famous Liberty Landing International Airport Pit Stop Team sprang into action. We had the tire changed in only 12 minutes.

Onward we drove. One hundred miles later, with Sharon in the lead, we all heard the BANG! as her right trailer tire blew. Once again we sprang into action. It took only 6 minutes this time, because all the tools, jack and lug wrenches were still where they had been thrown from the previous event. (The tires were over 10 years old and should have been replaced long ago.) The rest of the drive was uneventful, which was good because we were down to just two spare tires.

Arriving at Columbia Regional Airport, we started assembling planes with a vengeance. Over the years, we’ve gotten this procedure honed to a pretty good act. Most of us can get our Nieuports from road-ready to air-ready in about an hour and a half. The Morane takes only 30 minutes. This was the shakedown cruise for the DH-2, and we didn’t even think to time it.

While we were busy doing all this, we had a constant stream of visitors coming through the hangar just to watch or wanting to help. (This always slows things down.) While we were working away, two sharp looking sailors came in and started nosing around. Finally, the female of the pair asked if we had any electrical stuff. I had a small case of connectors and electrical cutting/crimping pliers in my tool kit. They asked to borrow some to fix a small wiring problem in the F-18 Hornet that was busted out on the ramp. That was a first. The Navy wanted to use our tools to fix a multi-million dollar plane. Kinda made us feel special. They brought the tools back, too.

Anyway, the planes were finally assembled, and we were ready to aviate. The weather looked great for both days of the show, and we were slated to fly twice each day, once for the salute to WW-I aviation. The second time we were scheduled to fly was while the Canadian Sky Hawks Parachute team was climbing to altitude in a C-47 to start their act.

Saturday morning started at Oh-Eight-Hundred hours with the pilots briefing. This is always an exciting time for me. Here we were, the Dawn Patrol, the plankton in the airshow food chain, sitting in the same room with pilots flying supersonic fighters, WW-II warbirds and other examples of Big Iron.

Then…there we were, flying our little 60-mph, 400-pound, cheap warbird replicas. But, by golly, we were there. Even more amazing, we were supposed to be. The Air Boss finished the usual bit about time hack, show lines, show times, weather and such and then looked up. Dawn Patrol. Are you guys ready to go? You’re first on the list to go up at 0930. (Dont you just love military time?) 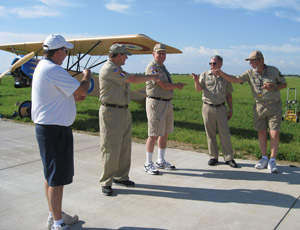 Robert (Bullwhip) Baslee of Airdrome Aeroplanes looks on as the flight lead is chosen. (Its always like this. No one wants to lead.)

Too excited to speak, we all swallowed and nodded our heads. He smiled and turned us loose to go to our airplanes and get them staged for start-up. As we walked out the door, he told us that if there was any extended dead air time, he was going to ask us to fill it. Wed done this the year before when the ceilings were too low for everything but WW-I planes. Wed flown a lot that day. From then on the Air Boss called us the Airshow Fix-a-Flat and Stop-Leak guys.

One last thing had to be done. The FAA supervisor of the airshow came by for the usual paperwork check. Everything was swell until Tom Glaeser couldn’t find his pilots license. After giving up on finding it, he was sitting on the ground about ready to cry when Sharon said, Give me your billfold! After one minute of throwing credit cards, photos, receipts, his A&P license and long-forgotten shopping lists on the ground, she found his pilots license. Now we were ready to go!

As it got closer and closer to 0930, our pucker factors flared up. We’ve been doing this for more than 20 years at shows with our little airplanes, but the tension is always there. Whos going to thrill the crowd this time? We’ve all done it. Wild, out-of-control swings on takeoff were common before we went to the new landing gear arrangement. Ten-foot-high bounces on landing are always a possibility when landing on a 200-foot-wide runway when you’re used to one thats 15 feet wide. Ground loops on landing are a surefire crowd pleaser. Landing a short-coupled WW-I taildragger on grass is a joy. Landing on pavement is a whole new thrill ride. Grass will let you slide a bit, but on pavement tires dig in and you have to be really attentive to the slightest swerve on landing or, as the song goes, Don’t look, Ethel!

At about 0930 the Air Boss came by, gave us a final ramp check and said, Light em up!

Four of the Tom Glaeser Missouri Madness Chainsaw starter engines began to scream, and then the aircraft engines snorted, belched and blew smoke-your basic angry reaction to being goaded into motion. After about 4 minutes of running to let all the engine gauges find a green arc, we called the tower and told them, Dawn Patrol flight of five, ready to go. The tower turned us loose to go to runway two-zero and hold. Then we got those thrilling words from the tower, Dawn Patrol…the air is yours!

Yee haw! I got off the ground first and quickly turned left to start a close-in pattern to pick up the next person taking off and join up. It was Tom Glaeser. He started his takeoff roll too soon, got caught in my Nieuports incredibly dirty air and had a Don’t look, Ethel takeoff. By the time he got it all together, the tower was telling him that next time, theyd have white lines laid out for him in the grass beside the runway.

Finally, we all got in the air: three Nieuports, a Morane L and a SPAD 13 replica. It was a great 30 minutes of smoke passes, low passes and just plain fun. The announcer was playing authentic WW-I music and talking about the planes in the air. It was swell!

The only fly in the pudding was Pierces smoke system. When we formed up for our three-plane smoke pass, all of our plans flushed down the tubes. Glaeser was flight lead. I was on his left wing. Pierce was on his right. As we passed airshow center, Glaeser nodded his head down to signal, Smoke on!

His Nieuport and mine both started laying down a nice trail of smoke. Pierces plane just flew on. Then we heard some muttering and yelling on the radio from Pierces plane. His smoke tank had busted a hose and instead of the smoke going into the exhaust manifold, two quarts of slimy, slick, Corvis oil had squirted all over his feet, rudder bar and cockpit floor. You can almost predict what happened next, cant you?

We were told to land by the Air Boss, and all went well until it was Pierces turn. His feet were sliding all over the rudder bar and when he hit the ground, on the pavement, his plane swerved to the left. He gave the Nieuport Stomp to the right rudder bar, his feet slid off the bar, and he did one heck of a crowd-pleasing ground loop to the left. The damage was slight: some fabric off the tip of the lower right wing and a bent axle. All fixed in less than an hour (duct tape rules!). We flew again while the Canadian Sky Hawks were clawing to jump altitude in the C-47 and didn’t make any more Ethel maneuvers. Sunday went the same way. We flew twice and had a ball.

Thats what building and flying your own WW-I replica is all about. You get invited to go to neat places and do neat things. We got invited back to Columbia next year. The FAA guy was not waiting for us when we landed with a clipboard and a scowl. All repairs are already done. Life is sweet.