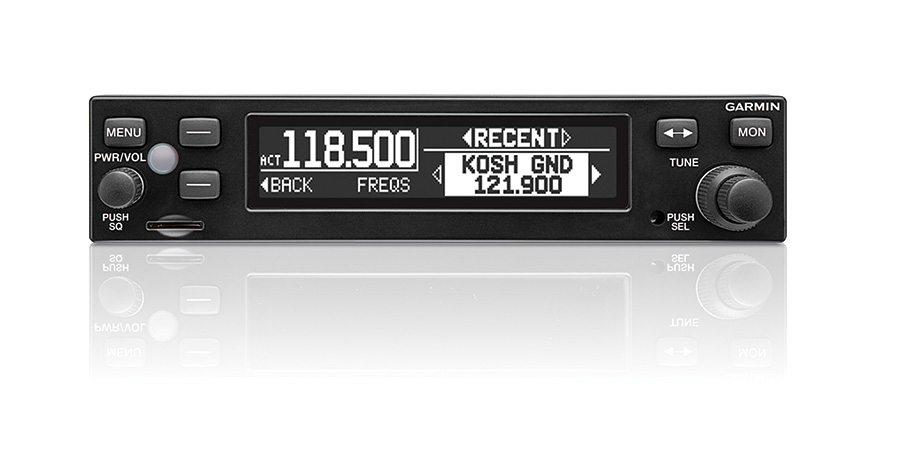 We would wager to bet that there are very few pilots in the Experimental world that have not, at one time or another, used a Garmin SL-40 as their primary means of communications. The dependable SL-40 was originally designed and marketed by Apollo before they were bought out and absorbed into the Garmin family of products. The radio has soldiered on as a reliable and dependable source of clear communications for decades—compact, easy to install, and rarely needing any service.

But times change, and the life-cycle of electronic devices gets shorter every year. Highly dependent on custom chip sets, consumer-grade electronics change model numbers several times a year. Try getting that DVD player you bought last year repaired—it is probably already a dinosaur with no chance of a facility having spare parts in stock—or even available. But because of the nature of aviation certification, the products we use in aircraft are generally supported for a decade or two. Yet all good things come to an end, and the SL-40 is another victim of the relentless drive forward in technology. It has, at last, succumbed to a lack of spare parts, and will die off as a species as the existing spares are used up.

The good news in this world of obsolescence is that it naturally breeds new products—which hopefully build on the lessons of their predecessors—to give pilots and builders more of what they want and need. Garmin’s new GTR 200 communication transceiver is just such a device.

Introduced at AirVenture 2013, the new GTR is a compact and inclusive electronics package that can provide a builder with both a communications radio and a high-end intercom in one box. The communications radio has the ability to monitor both the active and standby frequencies, features an extensive memory capability, and interfaces with popular EFISs that can “push” frequencies to the standby slot or many different memory locations. The intercom, designed with lessons learned from building the Garmin line of audio panels, is built into the box so that a typical VFR pilot needs to have only one rectangular hole in a sparse panel to have both good audio and good communications.

We had a preview look at the new radio before it was released at the show, and are impressed with its sound and audio quality—as well as the many digital features that should please any true techie. Although we weren’t able to fly the unit in an actual cockpit, we were able to test it as coupled with a G3X display screen to sample the way in which it can interact with an EFIS.

The radio itself installs in essentially the same panel hole that would house an SL-40, approximately 1.3 inches high and standard width for a radio stack. The new unit is a couple of inches shorter and doesn’t share the same tray or back plate, so for those doing a retrofit, new wiring will be required. It does, however, share standard sized D-sub pins and sockets; so for a replacement, it is a matter of de-pinning the old connector and repopulating the new connector with the same pins. For those changing from a radio and separate intercom, it might be a little more complicated, so some study of the installation manual is advised.

For a new installation, the GTR 200 should simplify things because of the integrated intercom. A builder will need to connect power, ground, PTT, and headset jacks. If an interface to a GPS or EFIS is required, a serial data line would also be needed, as well as an antenna, of course. Garmin’s new method of retaining the radio in the tray is an elegant screw-activated lever/cam arrangement that should please the heart of any mechanical engineer and operates quite slick and smooth.

When used as a standalone radio, the GTR has its own database that can be updated using a miniature SD card. This will provide the pilot with a vast array of frequencies that are identified by airport and type (Tower, Ground, CTAF, AWOS, etc.). If you connect the unit to an EFIS or GPS, frequencies can be downloaded in real-time by taking action to push a particular frequency into the standby slot, or in the background as the GPS determines your location and downloads a block of geographically appropriate frequencies. If you decide to use all of this memory and database capability, a read through the manual is advised—it can save time, but only once you have mastered the button sequence that will make it all work. Potential shoppers should be aware that this is not a radio that is fully controllable from your EFIS screen, as are some of the offerings from the various EFIS manufacturers.

For those of you who like to tune your radios the old fashioned way, the GTR couldn’t be simpler—just twist the knobs and push the button to transfer the frequency from standby to active (as with most radios). A feature that is becoming standard with many radios is the dual frequency monitor (something that the SL-40 has always done) that allows the pilot to listen to both active and standby frequencies—effectively giving him all of the benefits of a dual radio installation (except redundancy) for half the price.

The sound of both the radio and intercom is very good, and interaction with both is simple. With a suggested retail price of a little over a thousand dollars, it is competitive with just about any offering out there. When one considers that the price includes both a radio and a quality intercom, it is going to be hard to beat. It will be interesting to see where the “street price” settles out, but we expect this radio to give the competition a run for the money.

The SL-40 couldn’t last forever, but fortunately, its replacement seems to be an upgrade for a reasonable price.

Larry Anglisano - April 29, 2022
2
There are plenty of display options at all price points.

Jared Yates - November 16, 2012
0
Simple and light—very light: The Bearhawk LSA is the latest addition to the Bearhawk family, the culmination of decades of design experience.

Bob Fritz - February 15, 2008
0
Builder Walter Treadwell has taken on projects that many of us would find daunting, and he keeps upping the ante. First came a Lancair 235, then a plansbuilt Jenny JN-4, followed by a P-38 and then his current project, a resized Sikorsky S-38. Some 4000 hours into the new project, Treadwell has a ways to go, but fortunately he has a mini AgCat to fly in the meantime; by Bob Fritz.