So here was the problem. The wonderful little airplane we were building, an RV-3B, is well known for its nimble responsiveness and excellent handling qualities. The RV-8 I had been flying for over 1300 hours remained my favorite airplane, partly because we would go out and do aerobatics several times every week. But the -8 was built with a tried-and-true carburetor and a standard oil system, limiting me to positive-G aerobatics—unless I wanted to burp oil all over the belly every time I “pushed.” It was fine for what I did with it and, to be quite honest, negative G hurts when you get older, so I didn’t really miss it. Yet I wanted to be able to fly a truly vertical line or a hammerhead that doesn’t require a little positive-G cheating. 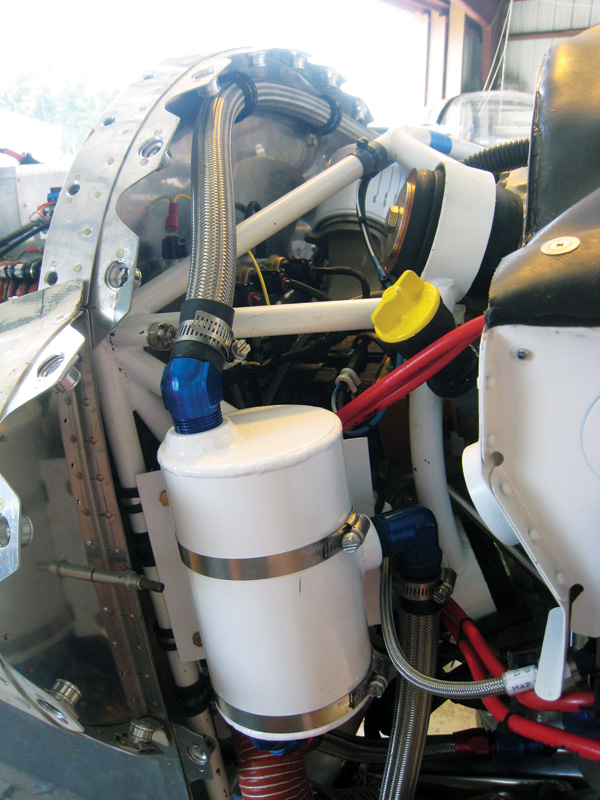 Enter the RV-3B! While we were building the airplane with lightweight advanced avionics to make it a good traveling machine, it was still an RV-3 at heart and would prove quite perky with an IO-320 on the nose. And I wanted to avoid “building the airplane that I already had”—that is, making the same decisions on this one as I did on the last airplane I put together. So while I didn’t go all the way for flop tubes in the tank, I did decide up front to go with fuel injection, to help keep the engine running on those vertical lines, and planned for a Christen inverted oil system to keep it lubed and the prop under control for those “pushy” maneuvers. Both choices involved extra cost and weight, but I felt that they were worth keeping on the list as long as I could. 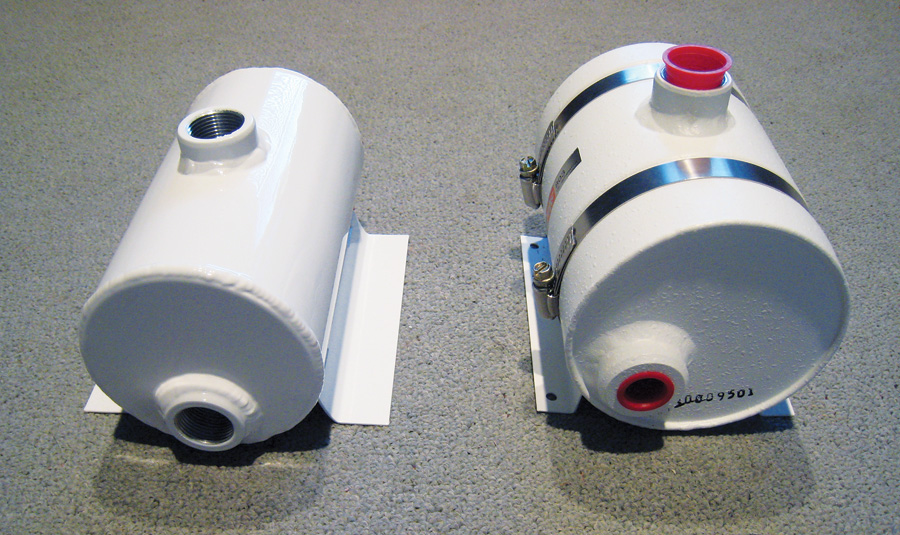 The Raven oil tank is smaller than the Christen (on the right), making it easier to fit in a tight installation.

Well, the fuel injection system had been a piece of cake throughout the build. The engine came well equipped and checked out, the high-pressure fuel pump added cost, but the installation was clean, and I was glad that I didn’t have to find a place for a carb-heat knob on our crowded panel. I was able to get a very good deal on a new, never-installed Christen inverted oil system and purchased the necessary hose and ends to build up the oil lines that would be needed. Everything was in a box waiting…then the challenge of installation arose. 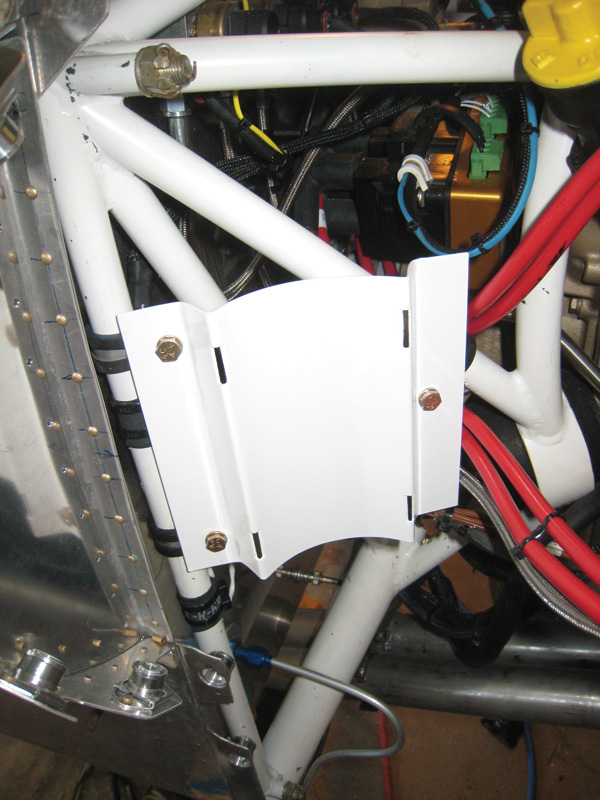 The oil tank mounting bracket was hung from the engine mount tubing using Adel clamps. Looking from the side, it is apparent there is very little room for anything else.

You see, this was an RV-3. The engine nestled up to the firewall nice and friendly-like. In fact, we needed a firewall recess to allow the prop governor to fit. Throughout the firewall-forward integration, I kept room for the needed Christen equipment: the oil tank, oil valve, and T-fitting for the oil vent lines. It was an up-and-down thing—one day, I felt I could get it to fit; the next day, the trades just seemed to overwhelm. While I was quite certain that I could physically mount the components, routing the large-diameter hoses was going to be very, very tough. The engine compartment would be packed, with very little space left over. On top of that, I wasn’t sure that I could fit the cabin heat box and the Christen oil valve on the firewall, which led to the following conversation with my building partner (and wife):

“Honey, I am afraid that we are going to come down to a choice between inverted oil and cabin heat. Yes, we have the heated seat installed, and yes, we are going to have all that solar heat coming in the bubble canopy, but I just don’t know how we can add a heat box and still fit the oil lines.”

“Well then,” she replied, “there really is only one choice, you know.”

“We have to install the inverted oil system! I just want to make sure I can buy some heated socks for when I am flying!”

Have I said how much I love Louise? 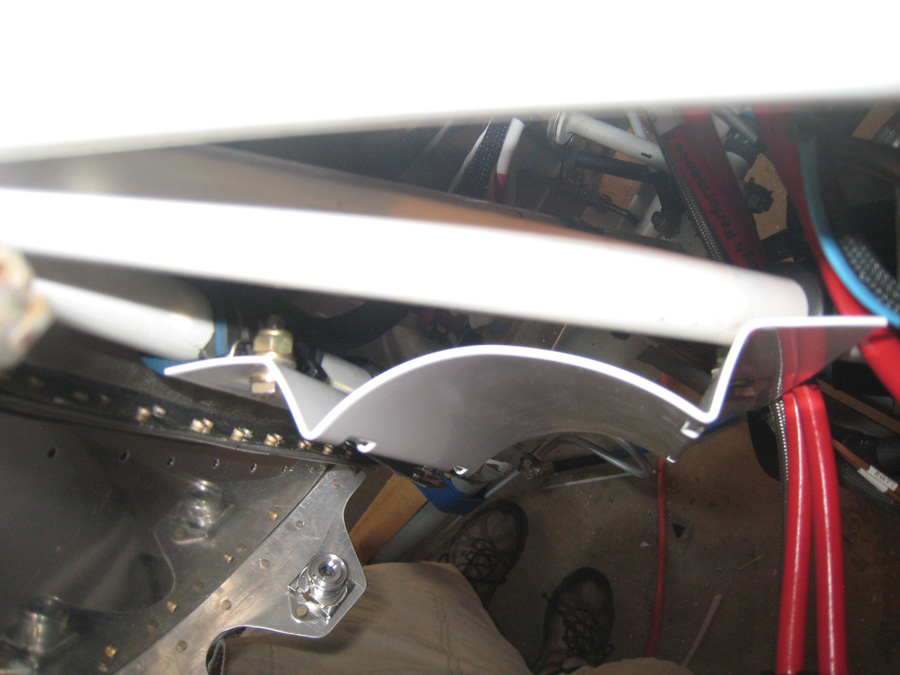 The curve of the bracket fits the oil tank perfectly.

With the cabin heat crisis averted, it should have been easy, right? Well, it still wasn’t a slam dunk getting this stuff to fit. And two other little bits of information had recently bubbled their way to the top. The first was a posting to the internet of a Norwegian mishap report. An RV-4 with a full Christen system had the engine seize after a loss of oil pressure due to freezing slush in the oil ball valve. Now, although we were living on the Texas Gulf coast (where freezing weather is almost non-existent), we had already planned on moving to the mountainous west, where we now experience a “winter” season and routinely fly at much higher altitudes, where the temps are much lower in general. This was not a trivial issue—seizing up due to lack of lubrication. The question became not just one of is inverted oil a good thing to have, but rather a risk trade—is the (admittedly small) risk of a frozen system worth the amount of (admittedly small) actual utility we would get out of this addition to the airplane? 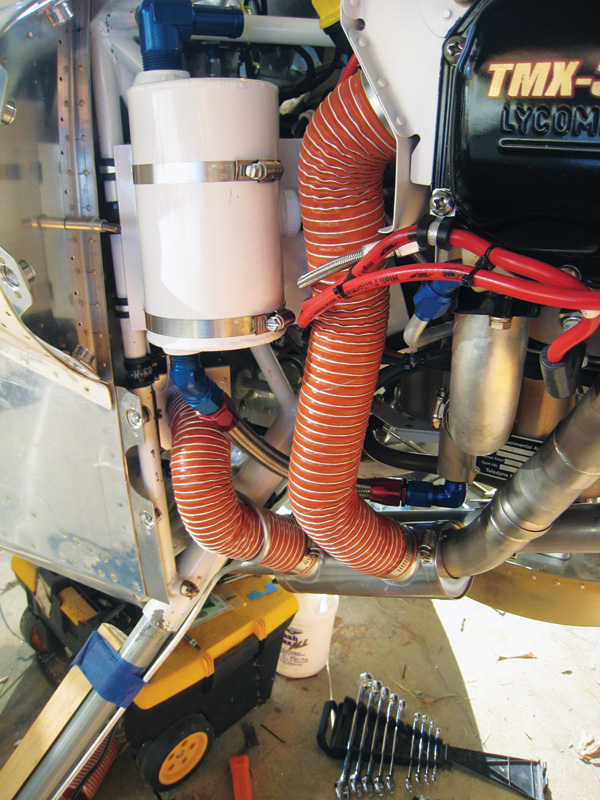 The placement of the tank coincides with the cheek of the cowl, creating more space than you’d have with a cheekless cowl.

The second bit of information gathered itself slowly through numerous fragments of data. It became clear that inverted systems are great for positive or negative Gs; but right there in the middle (the low and zero-G regime), it is not uncommon for the stock Christen system to allow the oil pump to cavitate and the prop to lose pressure. One of the whole points of this exercise was to allow flight in the zero-G regime with no problems, so this information really raised a red flag. The problem was, of course, fixable, using an addition to the system known as an accumulator—a device that is charged with air pressure to keep a “squeeze” on the oil and feed the pump with “accumulated” oil, should it not get it from gravity and various valves. No problem, right? Just buy an accumulator! Well, the problem was, they aren’t small; they’re cylinders several inches in diameter and quite a bit more than that long. I knew of challenges fitting them on two-place RVs. Finding space for one on the -3 was going to mean even more had to be omitted. One -3 builder who had managed to squeeze a modified Christen system on board was advertising his accumulator for sale because his firewall finally cried “Uncle!” It was beginning to sound very much like “game over.”

So what did it all mean? Well, it is always good to go back and evaluate your basic assumptions and goals when faced with a difficult design challenge. In this case, I really wanted to have the inverted capability to keep the prop under control and the belly clean. I desired a different capability than my existing airplanes. But I didn’t want to build an airplane destined to be a nightmare to maintain and requiring significant tinkering to get right. True aerobatic machines require frequent inspection and constant maintenance when operated to their limits. A good inverted oil system is often just a beginning as the valves are tuned, accumulators added, and experience shows the need for even further modifications and/or improvements. As one of my friends put it, “A Formula One car does not make a good daily driver!” No kidding…and who was I kidding? I knew the RV-3 was going to be a blast to fly, and I felt certain that I could do just about anything that I wanted with the slight penalty of adding a quart of oil through the filler tube while cleaning it off the belly with a rag. Talking with an old friend who had previously built and owned a Christen Eagle, and then flew a well-known RV-8 with full inverted oil (plus an accumulator), I learned that if he were to build the -8 again, he’d probably just leave the inverted system off, because even with the accumulator, he gets a bit of a prop surge at “zero.” There is, after all, no magic bullet. There rarely is when it comes to real-world engineering.

As part of re-evaluating the goals in this case, I came to one more realization, and this became the path through the woods. What I really wanted in an inverted system was not so much the capability to operate under any “G” condition, but merely to avoid dumping all that oil on the belly! And lo and behold, there was a solution for that, a modified inverted oil system referred to by many as the “Half Raven” system. This idea uses the inverted oil tank from Raven (which is smaller than the Christen tank), a riser fitting in the sump, and hoses to connect the crankcase breather to the tank and the tank to the sump. Effectively, this provides a catch basin for oil when inverted Gs are applied and lets them return to the sump when you get back to upright conditions. No, it doesn’t ensure lubrication, but then, short periods of lubrication loss are probably OK (as evidenced by millions of hours of Lycoming flight under turbulent conditions)—a few seconds at most. This option eliminates the complexities of the oil valve, lots of hoses, and frees up the firewall for that heater box we keep dreaming about.

So there I was, suddenly free of the burden of having to make it all fit and work to meet my design goals—because I re-evaluated the goals. The Half-Raven system gave me the capability that I really wanted in the first place and allowed us to build the airplane as a reasonable aerobatic machine, while retaining the creature comforts necessary to travel in the northern latitudes in most seasons. Building an airplane that can be easily maintained is a plus in any book. While I have no doubt I could have fit the full Christen system in, we’d have built more of a “point design” airplane that was good for airshows, and not much else. And I’m too old to be an airshow performer anyway; did I mention how much negative Gs hurt these days?

And there’s an extra benefit—I haven’t needed to buy those heated socks for my lovely wife!