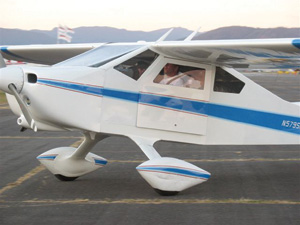 Mahoney’s BD-4. He initiated a small baking project to improve its aerodynamics.

While flying my BD-4 through our rainy Pacific Northwest skies, I often noticed that the raindrops streaking near the top of the side “quarter” windows moved in a circular path. This pattern led me to perform some tuft testing, which revealed that the airflow around the window, just beneath the Bede’s high wing, was turbulent, which caused two bad things: noise and drag.

Bring in da Noise (and Drag)

This airflow separation causes vortices that travel back and forth, beating on the flat plexiglass side-door windows right at ear level. Occupying the cabin during flight is like sitting inside a musical instrument, maybe a drum; one passenger likened it to a bee inside a beer can. Many years ago, in an attempt to damp this noise, I installed a secondary set of plexiglass windows on the inside frame of the front windows with about 1 inch of dead air space between them. This helped some, but it always stuck in my craw as an inelegant and heavy solution. The idea of killing noise at the source was much more appealing than just muffling it. 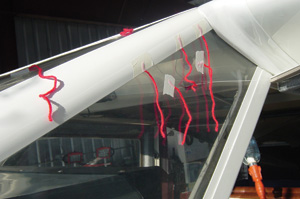 Tuft testing of the side window helped shine a light on local flow separation.

With regard to drag, any situation that transforms energy into noise and makes water droplets move forward must be causing drag. I hate drag.

Battle of the Bulge

To conquer both of these enemies I decided to replace the flat door windows with new ones that bulged slightly. The curved shape should be friendlier to the airflow and, as a bonus, be rigid enough to prevent the vibration that caused all that noise in the cabin. The idea was fine…all I had to do was figure how to make a bulged window!

The first method I tried was a drape form. I carved a male mold for a window that bulged outboard and fit the existing frame in the door. I heated a sheet of plexiglass, draped it over the mold and allowed it to cool. Several attempts proved unsuccessful. It was hard to control the consistency of the material, and the optical properties of the finished window were terrible. 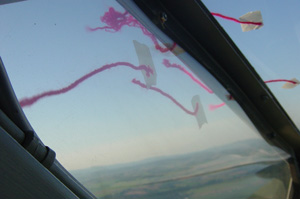 The tufts in flight. Yarn at the leading edge of the wing hangs there, indicating stalled airflow.

That avenue exhausted, I decided to try free-blowing the window. This method required trapping the edges of the plexiglass in a frame that resembled an old tennis racket press, heating the assembly until the material was soft and then introducing compressed air into the frame to force it into the desired shape. The amount of bulge in the window is controlled by carefully regulating the air pressure. I didn’t want to blow too big a bubble, just enough to prevent oil canning and provide a little better aerodynamic surface. All I needed was a place to heat the plex where I could see what was happening, and a way to introduce and control compressed air. Nothing to it. 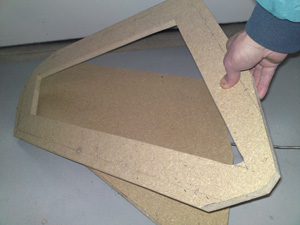 The first step in creating a new, bulging side window was to make a frame to define the mating flanges.

The first thing to consider in performing such a procedure is timing. I waited until my wife had a day’s work away from home, and began to plan the operation, because the obvious tool for providing the heat I needed was the oven in the kitchen—her kitchen. It was perfect: accurately controlled heat and a window in the door. Perfect, except that the designers of the oven had, for some inexplicable reason, thought more about the size of turkeys and pork loins and completely ignored the needs of BD-4 window builders. The oven just wasn’t big enough. 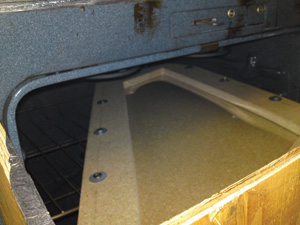 With the sheet of flat plexiglass in the frame comes the test fit into the oven. Oops. It’s bigger than a turkey.

So I constructed a plywood “oven extension” that would provide enough space for the airplane window and mold. It mated to the oven opening and rested on the open oven door, trapping the oven’s heat in a larger space. I then hid the extension in my shop and consulted my wife’s calendar.

Timing the “forming event” was crucial. I needed enough time to get the oven ready, heat the plexiglass, form it, let it cool and then put all of my equipment away without leaving a trace. Monday night: band practice. Great! Band practice always lasts the entire evening, so I laid my plans, made all of the fixtures I needed—an air fitting mounted in the frame, for instance—and waited for Monday. 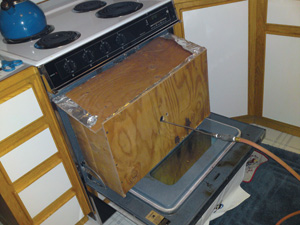 A homemade extension box for the oven allows the frame to fit.

When I saw the taillights leave the driveway, I sprang into action. I rolled the compressor into the kitchen and installed the oven-extension unit. Just in case, I moved my 5-pound shop fire extinguisher into the kitchen. I put the plexiglass with fixture inside the oven and set the dial to 320° F. Once the material was up to temperature, I slowly opened the valve on the compressor. With a tight seal around the edge of the plexiglass, it only took a few psi to inflate the window to the desired 1-inch bulge. The air hissed gently into the oven, the plexiglass bulged exactly as I’d hoped, and I had just turned the oven off and was letting the new, perfectly formed window cool when the kitchen door flew open. 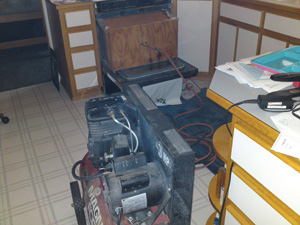 Mahoney quietly brought the air compressor into the kitchen. It’s used to provide a slight pressure bulge on the inside of the window pane to create the desired bubble. A little pressure goes a long way.

This was the exact moment I noticed the band music on the kitchen counter, where my wife had left it, and she had now returned to pick it up. The next few minutes are a bit foggy, but I remember some stammered explanations of the virtues of drag reduction and the benefit of reducing our carbon footprint and why it is important for the planet that our airplane be more efficient and help reduce global warming.

Carol didn’t buy it for a minute, but she hasn’t lived with an airplane-obsessed engineer for years without developing a sense of humor. I can only imagine her description of the scene—I’m sure the band was in stitches.

The windows ended up beautifully curved and optically perfect. I’m sure, absolutely sure, that they do everything I told her they would do. Better yet, they look really cool. 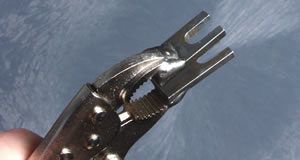