There are times that an aircraft design can benefit from a fresh start, maximizing its potential to meet a new market need. The Zenith STOL CH 701 has always been a fun little kit airplane, with a loyal following and the potential for continued longevity. But the Light Sport Aircraft standards allow much more to be gained by a little modernizing of the CH 701 basic design, so that individuals operating as sport pilots can take full advantage of its capabilities. 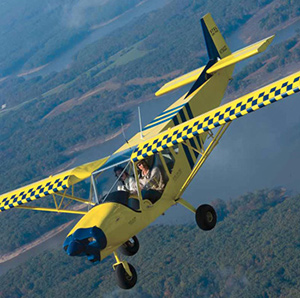 That’s why Zenith Aircraft brought out the STOL CH 750 sport-utility kit airplane, which at first glance could be taken for a customized CH 701, or perhaps a shortened CH 801, its four-place cousin. However, the CH 750 represents designer Chris Heintz’ fresh look at a two-seat backyard flier, this time optimized to take full advantage of the 1320-pound LSA weight limit and even larger engines than those typically used in the LSA-type airplanes.

The little CH 701 started out life in 1986 with 50- to 65-horsepower two-stroke Rotax powerplants, but now routinely flies with Rotax 912 engines of 80 to 100 hp. This boosts performance but also jacks up the empty weight, while recommended gross weight remains at 1110 pounds. Meanwhile, people have gotten bigger, and everyone wants to take more of their stuff along. So Zenith rose to the challenge by adding a more robust landing gear, moving the aft cabin bulkhead to the rear and putting in more windows to add visibility in the aft quarter. Yes, the cabin has been widened by 3 inches or so, but more importantly the larger swing-up doors now incorporate bubble windows that open up considerable elbow room. The illusion of space is heightened by the extra glass area over your shoulder.

Up front, the CH 750’s firewall design is shared with the just-introduced Zodiac CH 650 low-wing sportplane, which means most of the engine packages that have been fitted to the Zodiac can go onto the new 750. In addition to the Rotax four-cylinder powerplants, the six-cylinder Jabiru 3300 can be used, as well as the Continental four-cylinder direct-drive engines. Automotive conversions such as the VW, Subaru and Corvair will no doubt be investigated as well; powerplant weight should not exceed 250 pounds all up.

Not Just Another Pretty Face

Our visit to the factory to fly the CH 750 found the brightly painted demo ship ready and waiting on the flight line, where Roger Dubbert, company demo pilot, and Sebastien Heintz, company president, walked me around the plane. As with Chris Heintz’ other STOL designs, the wing uses fixed leading-edge slats to enhance lift, full-span flaperons that serve as both wing flaps and ailerons, and a unique gull-wing root profile that improves visibility from the cockpit. The CH 750’s V-type wingstruts, however, have a streamlined cross section rather than the round tubes used on the CH 701. Hoerner-type wingtips add stability and reduce the tip vortices. Two 12-gallon fuel tanks are in the wings, plumbed to feed simultaneously.

The CH 750 landing gear uses a beefy one-piece aluminum  spring for the maingear, mounting Matco wheels and hydraulic brakes with 8.00×6 off-road tires. The nosegear fork mounts a similar tire, sprung by a simple bungee-cord system. Unlike most Light Sport Aircraft, which tend to rely on differential braking, direct nosegear steering is available through the rudder pedals.
The high-mounted horizontal tail spans 8 feet 5 inches, about a foot wider than the trailerable CH 701. It features the cambered under-surface of Chris Heintz’ other STOL airplanes, the key to good low-speed control, according to the designer. An electric trimtab is fitted to the left elevator. The trademark Heintz rudder is nearly an all-flying surface, with only a vestige of vertical fin and dorsal left fixed.

One could say that the CH 750 is not just another pretty face. As with its siblings, it’s designed for ease of construction with hand tools, thus there are no shapely compound curves or complex assemblies. The upswept aft fuselage and a center of gravity located over the maingear are simply examples of form following function; the CH 750 is designed to rotate nose-high and lift off early, yet sit level on its tricycle gear during taxi.

Zenith’s kits are mostly constructed of 6061-T6 aluminum, put together with Avex blind rivets—lots of them. Out in the plant, Sebastien Heintz showed off the CNC cutters robotically carving out parts and drilling holes, so the builder has only to finish the part, line up the pre-drilled holes and Cleco the pieces together to start pulling rivets. Unlike many kit suppliers, Zenith will sell plans and builder manuals for home craftsmen wanting to cut out and bend their own parts from raw stock. However, when you see how quickly the cutters and presses can whip out the same item, perfectly formed, a scratch builder would probably opt to buy some parts instead of building every one.

The prototype CH 750 had been fitted with a reliable old Continental O-200-A as a test of the airframe’s ability to handle a heavy powerplant. Even in stripped-down dry weight, it’s a 188-pound engine, and closer to 250 pounds installed. An electric boost pump was added, just to ensure positive fuel pressure in some of the extreme climb attitudes, though it’s probably overkill, with the unfailing pull of gravity backing up an engine-driven pump. The airplane had self-generating P-model electronic ignition modules from E-MAG Electronic Ignition installed, firing automotive spark plugs instead of 1930s technology mechanical magnetos and aircraft plugs. A Sensenich composite ground-adjustable prop was being used for test flying before I arrived, but it had been exchanged for a nice three-blade Warp Drive propeller for photo purposes.

Go Ahead and Fly It

Roger Dubbert trustingly waved me to the left seat to try out the CH 750, as it was the only side with toe brakes installed. Entry is facilitated by the low seat height, gas-spring-supported doors and lack of a control stick or yoke. Zenith’s standard control system is a Y-shaped column that operates out of the center console, providing a stalk for each pilot. My left-hand throttle had an electric flap switch located directly beneath it. The electric elevator trim and indicator were on the panel next to the throttle, and a push-to-talk button was on the yoke.

The panel was a sport pilot’s enhanced-VFR dream package. The Dynon FlightDEK-D180 combined an electronic flight and powerplant display, and a Garmin GPSMAP 496 was nestled in an AirGizmos dock. These two highly capable units were supported by a Garmin SL40 com radio, GTX 327 transponder and GMA 340 audio panel, the latter a bit redundant with the SL40’s built-in intercom. With this gear, the CH 750 was ready to go cross-country as well as around the local STOL strips.

The master was flipped on to activate the Dynon display, which was switched to the engine parameters screen. Starting required only the usual O-200 throttle pump before twisting the magneto/start key. Once idling, the avionics switch came on and we changed the Dynon to a flight data display, with horizon, heading, airspeed, altitude and rate of climb augmenting engine data in one compact screen. The GPSMAP 496 was massaged into its map mode, and the transponder was activated, so we were all set.

Taxiing couldn’t have been simpler, with great visibility over the nose and responsive direct nosegear steering that obviates any need for the toe brakes. Dubbert had to remind me of the CH 750’s almost 3-foot-wider wingspan, compared to the CH 701, as I negotiated a narrow taxiway around the hangars. I noted a generous slice of forward visibility beside the tapered nose and instrument panel, which would come in handy in STOL liftoff and climbout attitudes. In the runup area, the pre-takeoff check required only a brief pause, mostly to set up the avionics. The P-mags checked out perfectly at 1700 rpm, carb heat was confirmed, flaperons were drooped to 10°, and the strobes and boost pump were activated. After verifying neutral trim and free-and-correct controls, it was time to fly.

The STOL CH 750 doesn’t linger once the throttle is opened; we were off and climbing in a scant few hundred feet, airspeed tape showing about 45 mph at liftoff and increasing to 65 in the climb. The normal climb attitude places the top of the panel on the horizon, making it easy to watch for traffic. Meanwhile, I could look straight down under my elbow through the door’s bubble.

Adjusting to the right-hand Y-yoke isn’t difficult; the CH 750’s control forces are not hair-trigger light. Pitch response was the quickest axis, the roll control from the flaperons slightly less so and the rudder stiff but effective. I was assured that the nosegear steering would loosen up with use, which would lighten the feel of the rudder circuit. Leveling off at 2500 feet agl, I played with lazy-eights, steep turns, slow flight and stalls, all comfortably handled.
The CH 750 tracked around the steep banks without losing more than a few mph of airspeed, and it hung on in slow flight at 45 mph with plenty of control. With the flaperons toggled down to max deflection, we could reach 35 mph IAS before the stall broke, and with flaps up we found the stall at 38 mph or so. Punching the yoke forward exited the stalls promptly, and with power applied we were back in business with minimal altitude loss.

Low and Slow’s the Way to Go

Speed is not the CH 750’s forte; Zenith’s sleek low-wing Zodiac CH 650 would be the choice for that role. At 2500 rpm, we were showing 89 mph, not bad considering the bulged windows and draggy gear and struts. A quieter 2400 rpm still gave us 85 mph, and a fuel-sipping 2300 rpm showed 80 mph while burning less than 5 gph. To be fair, these numbers were attained at an inefficient low altitude with the Warp Drive prop, while the factory’s 100-mph cruise figure was reportedly developed with the two-blade Sensenich. In either low-speed loiter or cross-country cruise, the CH 750 offers expansive visibility through a wall of windows. When banking into turns, we could watch the horizon through the skylight over the lowered wing while carving a slice of sky.

When we returned to the Mexico (Missouri) Airport, Dubbert introduced me to his private grass strip beside the north-south runway, an operating area more suited to the CH 750 than smooth pavement. The flaperons were lowered below 75 mph, the top of the white arc, and we set up final approach at a conservative 65 mph. Once the CH 750 is flared with power off, speed drops away quickly; we were down and stopped in the length of a football field. Takeoff rolls in the 6-inch-tall grass took no more than 300 feet, using about half flap. I could probably have tried harder and gotten off in one runway-light length.

The Zenith STOL CH 750 is a logically designed evolution of a well-proven design. Given the improved kit production techniques, it should go together in a predictable fashion, even more quickly than the CH 701. It serves in its low-and-slow role quite well, and it fits nicely between the 180-hp four-seat CH 801 and the lighter CH 701. The STOL CH 750 augments, rather than replaces, the other successful products.

Bob Fritz - July 7, 2010
0
Home Machinist Bob Fritz had been looking for a way to compare the effectiveness of various screw extractors he had accumulated in his toolbox, and he found a willing test subject in a Cessna 170s 60-year-old gas tank.

Dave Martin - April 16, 2010
0
This years Sebring Expo was a harbinger of the future for Light Sport Aircraft, and it appears relatively steady. By Dave Martin.

The Most Reliable Engine