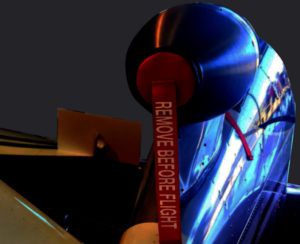 It had all the makings of a great caper movie – two guys opening a hangar in the dark with a surreptitiously obtained key, flashlights held in mouths, the predawn darkness amplifying even the smallest of sounds… my escape from Oshkosh was meticulously planned and perfectly executed so as to leave little trace that it ever happened.

Leaving in the jet was always going to be problematic, unless I had some sort of reserved slot. But since I couldn’t go IFR, that was out. Turbines get special arrivals – but for departures, you’re on your own – something I experienced while demoing a turboprop on Friday, when we spent twenty minutes burning kerosene in the conga line. I couldn’t afford that in the tiny Subsonex – I’d have no gas to depart of I held on the taxiway that long.

The answer is written into the operational code of the event itself. You see, the airport opens for departures at 0600, but is closed to arrivals until 0700. So, for one golden hour right at sunrise, everything is outbound. It turns out that when the local denizens of Wittman tower turn over their domain to the crowds of pink-shirt all stars, they itinerant controllers don’t take the ground operations – that is run by the EAA. So you have two runways which are controlled by the FAA, and a mass of taxiways controlled by volunteers. But those volunteers don’t start work until 0700 each day – so you effectively have an uncontrolled field – except for the runways. That means that everyone is on their own to find a way to the departure runway for that first hour of the day.

So the best way to assure that you have a place at the front of the line is to be at the threshold at 0600. Now you’re not allowed to start an aircraft engine anywhere on the field until the ATIS says the field is open – but nothing says you can’t have ground vehicles moving around. So with the aid of some confederates who will remain nameless, we secured the key to the hangar where the jet had lived for the week, along with a Jeep and some rope. After figuring out how to operate the big door (no two hangar doors have ever ben built identically), and rolling the jet outside, some master rope raft was employed to rig a tow strap, and we moved quietly down Wittman road to P1, then across the field to the threshold of runway 27, getting there about five minutes to six.

It was then simply a matter of listening to the ATIS until it changed, then calling the tower for takeoff clearance. They wisely didn’t ask how we got there, working on the assumption that what they don’t know cant come back to hurt them. It was a beautiful morning to climb away from the big show and, uh… sorry if I woke you up!