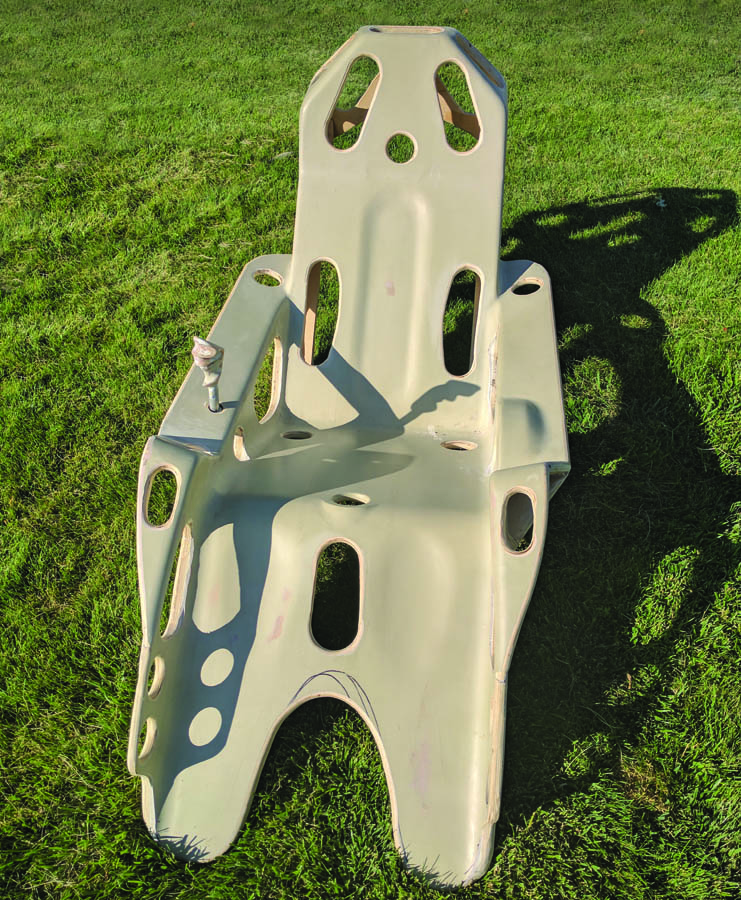 I’ve been drawing airplanes for decades. It’s an enjoyable way to pass time and something of a hobby. At the age of 40, I figured enough time had passed and hoped to convert some of my own ideas into a flyable airplane before reaching 50. The timing seemed pretty good. A seaplane project had just vacated the shop. Armed with an empty shop, a bunch of tools, leftover materials, and a strong desire to begin building, I faced the most daunting challenge yet—I couldn’t decide what to build.

I’ve flown hundreds of airplanes over the last four decades—well north of 20,000 hours in the air. I’ve enjoyed each plane in one way or another. Of course, the wish for more power is frequent, but also the wish to burn less fuel. I’d like to go faster, but not while landing in the weeds someplace. Aerobatics delight me, but the seven seatbelts and uncomfortable parachute can bite like a rabid dog.

In conversation with other pilots, we concluded that the perfect airplane is a myth. Personally, I’d like about seven airplanes, all kept in a huge hangar. Feeling the itch to fly, I could stand at the open hangar door and contemplate the plane best suited to my mood and taste, as though in front of a refrigerator considering a snack. The planes could vary in type, but must fall into one of these broad categories:

From your own perspective, you may prefer different categories. I am not fond of rotary wings, for example, but the point remains: It is difficult to find a plane suitable to more than a few of these categories at a time. Granted, a good bush plane might make an excellent seaplane, an aerobatic plane is capable of cross-country, and every airplane could be a glider by simply running out of gas—but the uncompromising best from each category does not mix well into the others. I like my Pitts for aerobatics, but for getting some place else in a hurry, I’d like a Lear. You get the idea.

I figure the education required for me to design my own plane will take a while, as will the specific details of the plane in question. It will likely run into years before I cut any parts in the shop. This is a difficult conundrum, as the shop is already empty, and I feel the itch to get started.

With the idea to build the world’s best aerobatic airplane, but no real plan in mind, cutting parts becomes quite a challenge. Then it struck me like a falling coconut: I’d build a seat. I’ve already got a plan fleshed out in my backside—just build the seat to suit and consider the possibilities from there.

I wish more airplane designers had my frame in mind when they build airplanes. Of the multitude of airplanes I have flown, very few were truly comfortable. All displayed compromises. None truly fit my larger-than-average frame. This is one category I could own and design into all others—the most comfortable and practical pilot seat ever. 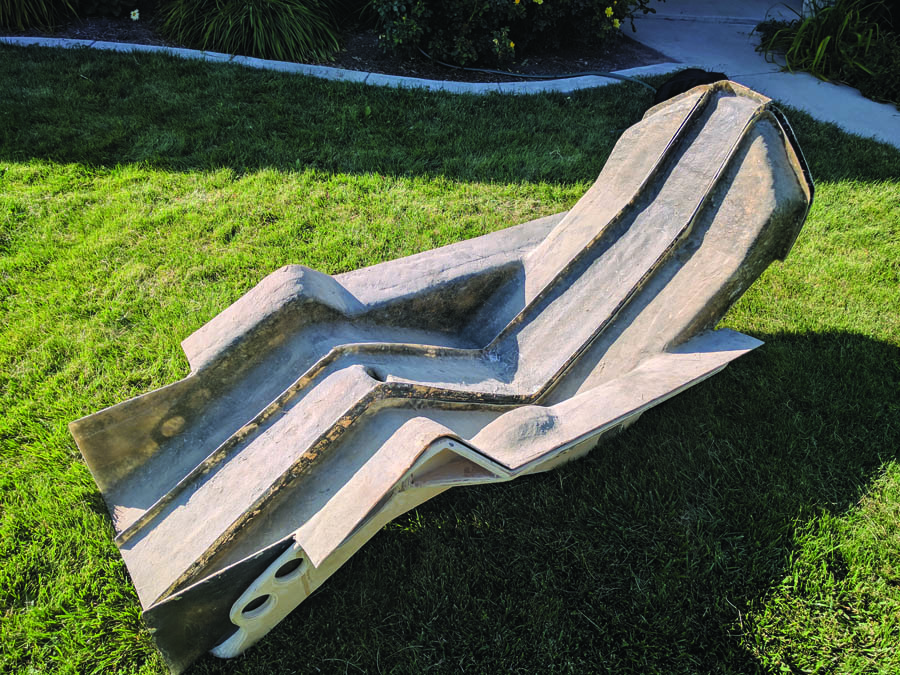 Seat with mold segments placed over it. The seat, as molded, has smooth sides—no holes.

The wheels in my brain began to spin, and I headed out to the shop to cut parts. This proved difficult—even measuring myself required more balance and flexibility than expected, especially without an actual seat to work from.

A short internet search sent me back out to the shop with a protractor and a small picture of a much vaunted “Zero Gravity Chair.” Some careful measuring and scaling of the picture set me to work on the table saw, cutting plywood to dimensions that I hoped would fit my 6-foot-2-inch frame. After fitting the parts together for most of a day, I took the opportunity to sit down into my work and see if the zero-gravity position lived up to the hype. My feet stuck out straight—like a small child—fairly swallowed up in the huge dimensions of my new chair. Apparently, the small errors and scaling guesses of the little picture translated into a chair tailor-made for Wilt Chamberlain. Lacking his skills and dimensions, I began sizing the seat a bit smaller. Block by block, one panel at a time, the seat took on the appearance of a wide Adirondack chair. After several days of cutting and sanding, I must admit, the seat became comfortable. The key dimension is a 120-degree angle between thighs and torso when seated. 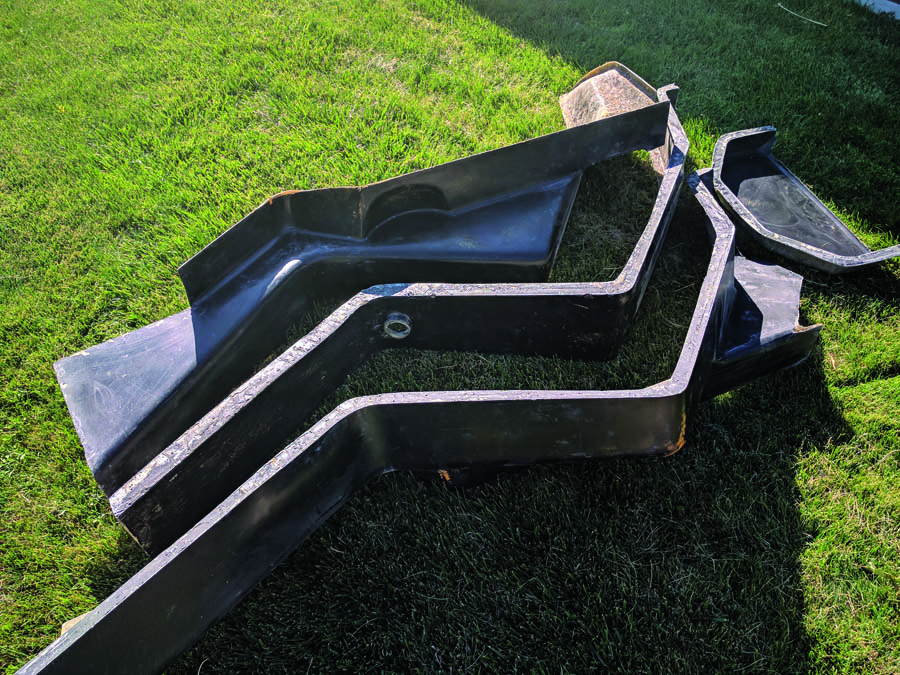 A bit more internet research revealed the dimensions of an F-16 cockpit. What could be better than zero gravity in an F-16? I set to work again, building wide arm consoles, angled slightly inward to fit pilots with different length arms. The fighter’s cockpit is nearly four feet across at the shoulders—most of it comprised of large side consoles. I figured 30 inches left plenty of room for elbows, and I didn’t need all the equipment space.

The whole art of ergonomics became fascinating. I wanted the seat to fit not only myself, but also my wife and children. Where to place a control stick? I sat for an hour making airplane noises and flying an imaginary stick. I settled on a side stick to the right. An interesting idea for a custom stick grip followed. I mixed up a batch of highly catalyzed fiberglass resin and chopped glass fibers. Wearing a latex glove, I placed the blob in my right hand, worked a length of steel tubing (the stick) into the mass and squeezed gently to what felt like a natural hand position. Now just let it cure—easy. Why doesn’t everyone do this? I thought. I forgot about the heat generated by rapidly curing fiberglass resin. It made a little smoke. I rushed to the kitchen sink and ran some cold water over it. This helped, but I began to sweat a bit from the pain. As the grip hardened, I let it fall into the sink to finish curing. The glove melted a little in all the drama. I wasn’t damaged, but my hand showed some redness. A bit of sandpaper shaping brought out the essence of the grip, now a perfect fit to my hand. I would do it again—with less catalyst. 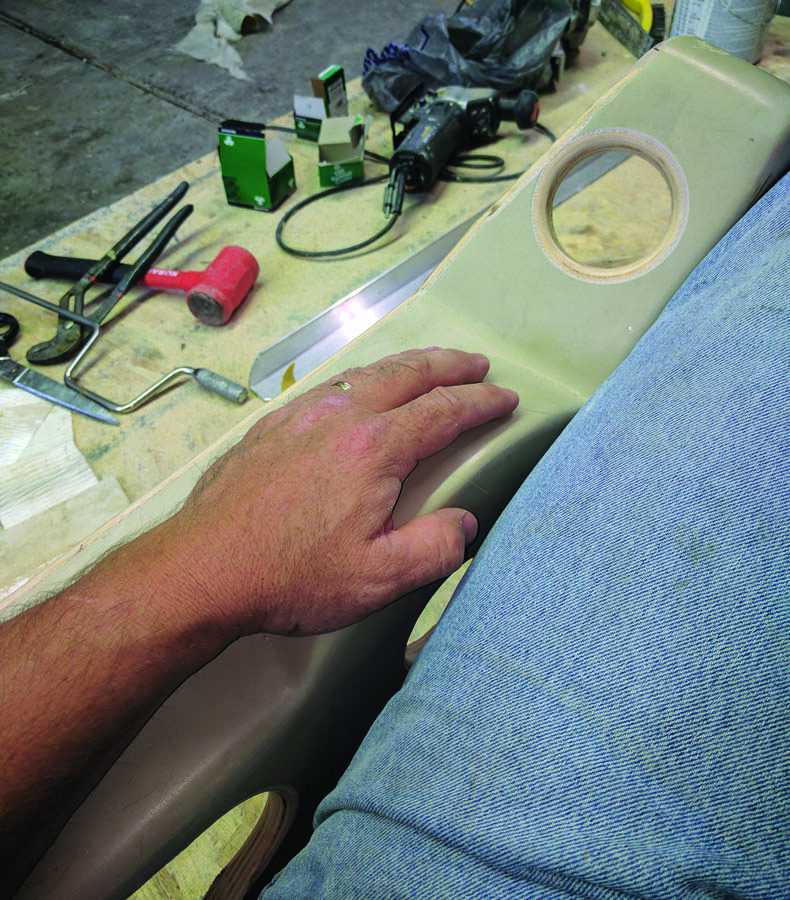 Throttle wheel on the left supports the hand comfortably—and accommodates both tall and short pilots.

Thinking Outside the Box

I wanted a throttle on the left, but what kind? A quadrant? A push/pull knob? Some kind of horizontal slider? How would throttle placement work for an individual with shorter arms, maybe several cushions behind their back? Considering it awkward to work a throttle lever positioned too close, I wanted it placed well forward. My daughter couldn’t reach it. Ultimately, I fit a sort of trim wheel under my left hand. The throttle/wheel could be manipulated from any point on its arc and seemed to work well for different sized pilots.

I planned seat belt attachments and got another idea—something like a blood pressure cuff. Imagine a comfortable seat belt with an inflatable bladder to secure things in place, replacing the mechanical ratchet found in most aerobatic airplanes. Could it be possible to withstand all the G’s in relative comfort? 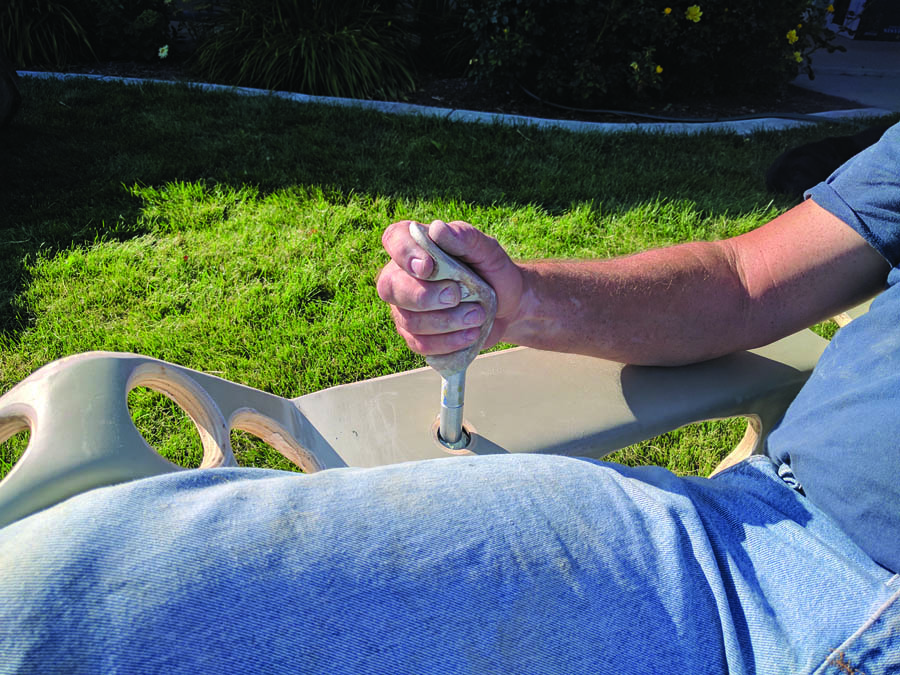 Custom molded grip. A computer track pad will fit under the thumb, with trim and transmit switches under each finger. Note to self: use less catalyst next time.

Flying my imaginary airplanes, I loved not having an instrument panel blocking the view. Every imaginary airplane seemed to have windows wrapped around my feet, like a helicopter. Could I eliminate the instrument panel? The side consoles certainly had space enough for system controls and switching, but flight information should be front and center of the pilot’s view. Yet another idea—augmented reality glasses. These are computerized head-up displays that position an image on small lenses in the wearer’s field of view. Grand Rapids Technologies has already experimented with this concept with some success. Google glass is a similar idea that might drive the price down in the long run. 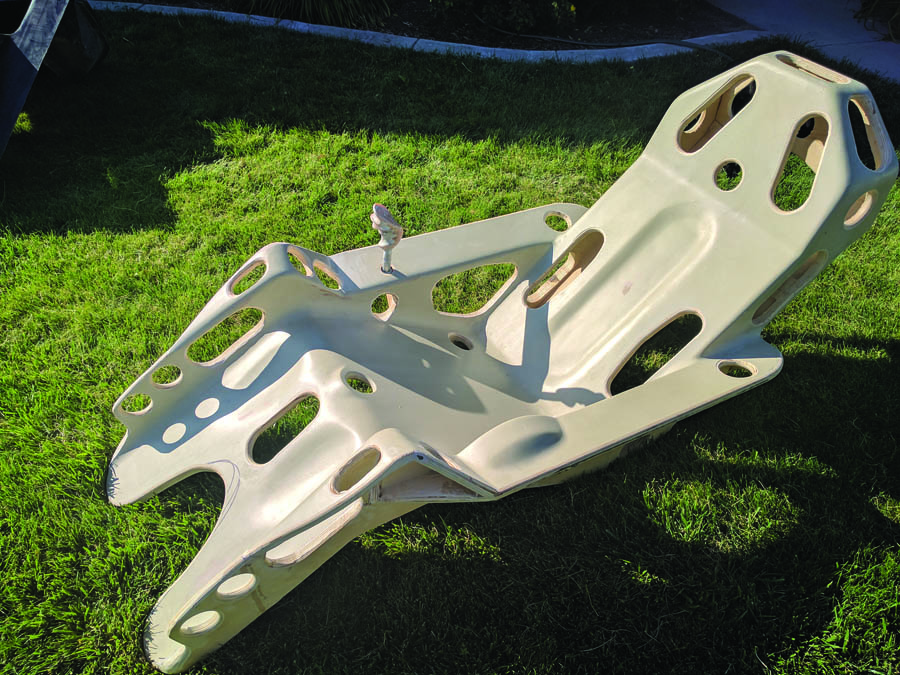 All these holes are an attempt at artistry—hoping to bring it indoors.

I continued gouging and sanding, shaping and sitting until the seat had morphed into a custom-fit, very comfortable chair—one I preferred to all others in the house. My son helped me carry it into the basement for Phase I testing—several hours of seat time in the home theater. We all tried it for at least a few hours, with the smaller folks requiring cushions for best comfort. I liked it bare and found it comfortable all the way through a two-hour movie. After several days, I could think of no further improvements to the basic seat. My wife could, however. She wanted it out of the house. It was big, heavy, and did not go with the other furniture. With the seat loaded in the back of my pickup, we headed to the airport to show it off, feeling like big-shot aircraft manufacturers with a cabin mock-up. Most of the local pilots tried the seat—and spoke favorably.

A big and heavy seat was never the intent for an airplane. Another month of effort produced a nice mold. The mold could be used to make a much lighter shell in carbon composite that would integrate well with an aircraft structure. I hoped the seat might be duplicated and ganged together, either tandem or side-by-side. Now with solid dimensions for my future cockpit, I put the mold on a shelf to wait until I knew what to build around it. 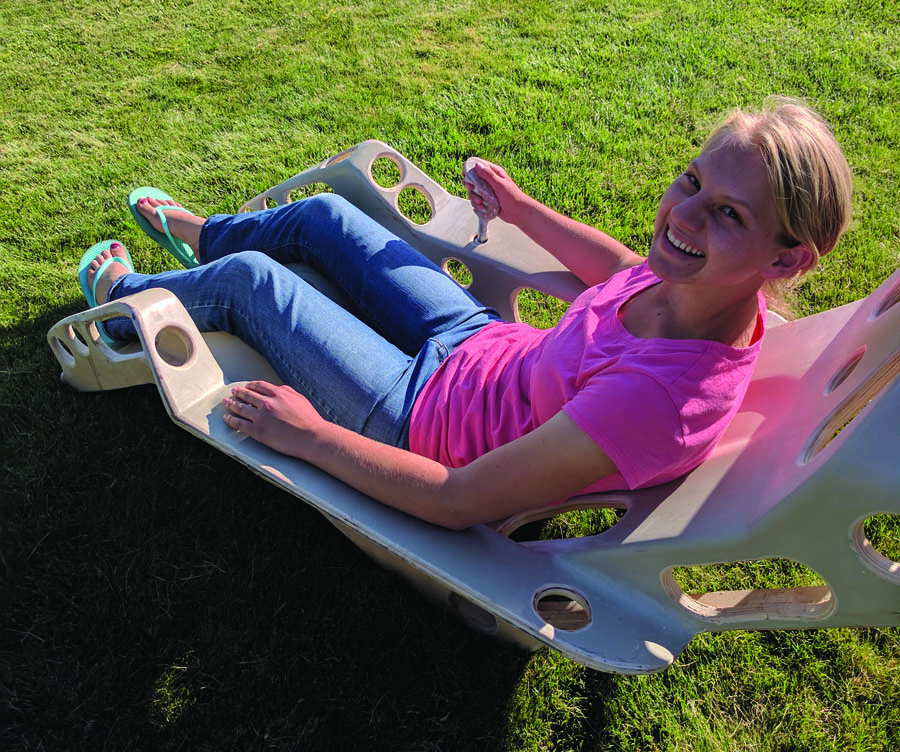 Careful control placement can accommodate a wide variety of pilots. Cushions make up the difference.

Meanwhile, 10 years have passed. I’m over 50. Hard aerobatics are less appealing now, although still enjoyable. The seat remains in my shop, still a great place to sit. The idea of cruising around with a great view just over my toes seems very attractive. In a perfect world, it would be quiet, like a luxury car—with a little music to set the mood. On occasion, I wonder how to alter the seat enough that my wife will allow it in the house. This is actually more difficult than fitting it to an airplane.

Either way, it’s been great fun.

Marking to Make a Planar Cut on a Curved Shape