In the last installment of this series, I related how 10 of us used two trucks, two trailers and five cars to load up N2699T and transport it to Lincoln Field for the first flight. Once there we found that we had a nose-heavy aircraft that required 15 pounds of ballast at the extreme end of the tail. To make it almost comical, we had a maingear shake that was unacceptable, and two new tires were required. All that was fixed and we had an inadvertent high-speed taxi at 6 feet AGL. Now we have reassembled, all of the invited guests have arrived and, you guessed it, AwNuts has crashed the party. 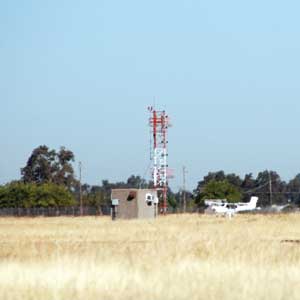 Its rolling! Two short towers and a few trees belie the expanse of grass on all sides.

AwNuts has been a constant, unwelcome and yet inevitable hanger-on throughout the building process, so his attendance was no surprise. And even though the control surface travel had been checked and rechecked, my good friend and neighbor, Mark Kirkpatrick, took a look at the coordination of the steerable nosewheel against the rudder and found that there was a 10 discrepancy. This would not be a big issue on takeoff, but it would mean a lot of tire wear, and a landing could result in a significant sideways jolt when the nosewheel touched down. The consensus among Ron Wright, owner of the hangar and long-time Jabiru pilot; Jim McCormick, distributor of Jabiru in California, Kirkpatrick, and me was that this needed to be fixed before the first flight, and it would take awhile and require tooling back at home. It could be argued that the high-altitude taxi and the elevator test had already proven that a full flight was possible, but we had previously decided that in matters of safety there would be absolutely no debate. 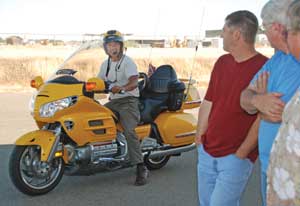 Milo Laguna arrives on his new Honda Gold Wing. It may not only weigh more than the Jabiru, but also cost more.

With disappointment showing, we made an announcement that the flight was being postponed. Not a single guest showed anything but respect for the decision, and home we went with a pocket of dimensions to modify one small component. All we needed was a lathe.

It was a bright and clear Saturday in August when neighbors Buz Sanders and Mark Kirkpatrick arrived at my hangar for the 20-minute flight to Lincoln Airport. Ah, the advantages of a wife, Li, who owns a small airplane. The other option was a 2-hour drive. We all climbed into Lis Cessna 172, she called Clear, and we were off. Kim Purcell, our local CFI, and her husband, Rob Kirkpatrick, lifted off shortly after, and Milo Laguna decided to take his motorcycle. Another 2-hour ride over mountain roads? Great!

Our good friend Angela Hey had driven from the San Francisco Bay Area, two and a half hours, but this time the long-distance award went to KITPLANES Editor-In-Chief Marc Cook for having flown 400 miles from Torrance in Southern California. By about 0900 we had almost a dozen observers looking for a shady chair.

Rob Kirkpatrick and Kim Purcell as a team in red shirts watch the action. But the author, in Cool Hand Luke mode, remains seated while Ron Wright and Mark Kirkpatrick monitor the handheld radio.

What we did not anticipate, even with the non-fliers was the near-party atmosphere at the event. Hey was treated to her first flight in something smaller than a commercial airliner when my next-door neighbor Al Herron, took her up in his recently completed RV-6A. He had just flown off his 30 hours and was delighted to show off his new toy. While Wrights preflight proceeded on 99T, his own Jabiru J230 was being ogled for its beautiful paint, upholstery and dual Grand Rapids Technology EFISes. Lagunas Honda Gold Wing was attracting attention as well. I should have sold tickets. 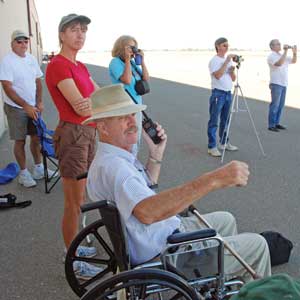 The Jabiru J250 is almost at Runway 15 and ready for its first flight. Ron Wright records it on a handheld video camera, Mark Kirkpatrick does the same from a tripod, while Angela Hey has at it with the camera. As he listens to the handheld radio, the author calls out, Hes rolling. Kim Purcell and Al Herron concentrate on the action.

When McCormick was finished with the preflight, we rolled the Jabiru out, and he fired it up and taxied out. Handheld radios were turned on, and he announced that he was taking Runway 15 for a first flight. Hes rolling! we heard, but almost before that could fade away, 99T was off the ground and climbing out smoothly. McCormick took a couple of laps around the pattern and ascended to 3500 feet AGL where he began to learn the feel of the airplane. Most of the flight was really nothing to watch, just a small white airplane making gentle turns in a big blue sky. We had barely become accustomed to this scene when McCormick announced his entry into the landing pattern; with no other traffic, he was on a short final before we had fully adjusted to the idea of 99T actually flying. A smooth touchdown was followed by taxiing to the hangar and engine off. There was no drama and no surprises, just the transformation of a two-year project into a genuine aircraft. For me, it was surprisingly ho-hum. I was a bit annoyed with my reaction in the face of so much support, so I just waited for McCormick to say something.

He reported that it was an ordinary Jabiru: stable, smooth, and the big wing I had chosen as an option would make it really float when on final. I didn’t try stalls, but that ballast makes it very neutral on the stick, so I suspect a stall will just mush ahead while descending, he added.

99T comes home to roost while Wrights J230 just sits there looking great. Those winglets? Thats a signature of the J230. The wings of the J250 on the left and the J230 are the same length, but the chord is 8 inches greater on the J250. Other than that, they are the same aircraft.

His second observation was that the cylinder head and oil temps were high. Ive heard from other Jabiru builders that theyve had the same problem and tried as many different fixes as there are Jabirus. Everyone eventually fixes it, but no two builders have the same solution. The hot idea of the moment (pun intended) is to modify the cowl to have operable flaps at the lower trailing edge. 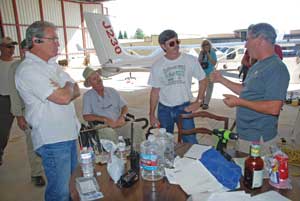 Air flows from the top to the bottom of the engine because there is a pressure differential between the top and the bottom. Adding inlets at the top helps to raise the pressure up there, so cowl flaps should help in lowering the pressure below the engine.

More significantly, both McCormick and Wright reported that the stock Jabiru brakes are, er, distinctly underwhelming; they fade quickly and even when cool have inadequate stopping power. Ill be replacing them.

Since I had a seizure last December, Ive been denied a drivers license, so flying off the remaining hours was left to Wright. He has 300 hours in type, so the insurance company said OK. But hes building a house, so its going slow. There is no rush, though; Kirkpatrick and I are working on the cooling issues. A lovely feature of the Grand Rapids display is that it records CHT. Well look at this closely as we try different fixes.

Speaking of cool, everyone congratulated me after the first flight, and I surprised myself by having the cool of Paul Newman in the movie Cool Hand Luke. It was not until the following week when I started to review it via the photos everyone sent to me and the video that I really begin to appreciate what had happened. The first dozen times I watched the video my thoughts kept going to Colin Clive playing the role of Dr. Frankenstein. As he watched the hand of his creation move he immortalized it with the words, Its alive, its alive! Now I know how he felt! But then that should have come easily to me. Dr. Fs assistant was, would you believe, named Fritz! Igor didn’t show up until Son of Frankenstein.

Finishing a project of this size is a cause for friendly celebration. From the right we have Milo Laguna, Kim Purcell, Rob Kirkpatrick, Jim McCormick, Ron Wright, Mark Kirkpatrick, the author, Buz Sanders and Marc Cook.

In Mary Shelleys book, the creation was not a monster, but a thing of beauty. It was the lack of maintenance and a testing program that went wrong. Im not kidding; read it! Taking that lesson to heart, now I have to really finish the project. Fly off the 5 hours required of LSA, add upholstery, give it a second paint color, do the weight and balance again, and perhaps make and install a flat floor in the back with tiedowns. Thats why its Experimental. I can continue to improve it. I think Mary Shelley would approve.