Longtime aviation enthusiasts understand that the sport evolves slowly. Sometimes agonizingly so. And what’s worse is that at a time when we need to entice new eyes and minds (and wallets) into personal aviation, we have little to offer on the technological front. Sure, today’s homebuilts have more computing capacity than the Space Shuttle and impressive capabilities that match certified airplanes at a fraction of the cost. 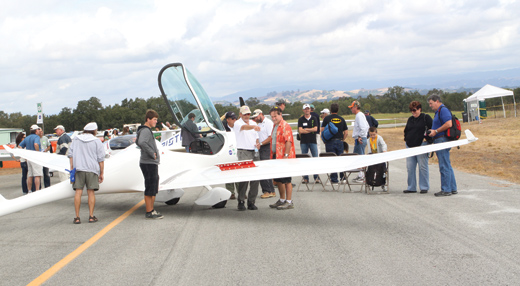 Interest in electric aircraft is growing, no doubt. A sizeable crowd showed up for the public day at last year’s NASA Green Flight Challenge in Sonoma County, California.

But these are subtle achievements when compared to advances in aerodynamics and propulsion to be found in other fields. When an outsider looks at an RV or any of the more popular kits, he sees a slightly different form of a “mature” airplane—visible rivets, perhaps tube and fabric, an air-cooled engine with so-so cosmetic appearances. He doesn’t see these offerings as leading edge.

Some hope rests on the seemingly inevitable advances in electric aircraft. We as a magazine have done what we can to promote this nascent industry. We’ve covered the CAFE Foundation Electric Aircraft Symposia for the last few years and have as one of our regular columnists someone who is intimately familiar with, and an ardent supporter of, electric and alternative-energy aircraft. Take a bow, Dean Sigler.

As Sigler will admit, the technology to make electric aircraft viable beyond experiments and closed-category competitions such as last year’s NASA Green Flight Challenge is progressing rapidly on many fronts. Electric motors are in the phase of development—pardon the pun—that internal-combustion engines saw in the early 1900s, gaining power and losing weight in impressively large increments. So, too, are the batteries coming our way, pushed toward greater energy density by the phone in your pocket and the computer on your lap.

A Look at Our Future?

I recently had the opportunity to ride the latest Zero motorcycle for a road test, spending several days living with it and sharing observations with those who have piloted previous examples of electric bikes. And while I have not ridden any of the preceding examples or its limited competition, the Zero S impressed me with its high level of development and real-world capabilities. If you were to wake up with the Zero S in front of you, it would excite you as something new and unusual yet recognizable, having equal parts leading-edge technology and familiar motorcycle layout. It’s not some sci-fi transpo-pod, nor is it a hacked-up motorcycle with a bunch of Die-Hards and a golf-cart motor welded in place. (This category has inventors and forward thinkers working at both ends of the spectrum, from those that look ready for production to those that might not make it around the block before catching fire. Just like Experimental aircraft not too many years ago, without the catching-fire part, of course.) 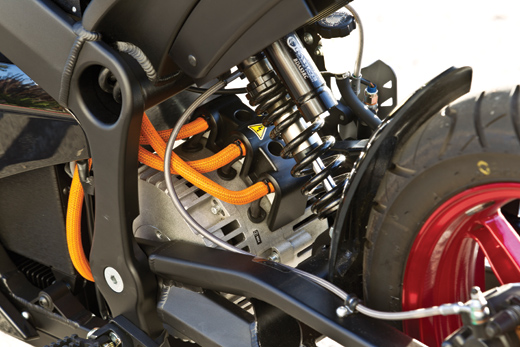 The Zero’s electric motor produces 25 horsepower, enough to move this light motorcycle along with traffic.

Zero has been pushing the development of its five-bike line—actually seven models, because two have battery-pack options—with the Zero S and Zero DS leading the way. The S looks like a fancy small motorcycle, with full suspension, disk brakes front and rear, a plastic nacelle where you’d expect to see a fuel tank, and a nicely built, conspicuously visible aluminum frame. An experienced motorcyclist, seeing the bare frame before the batteries, controller and electric motor were bolted in, would think nothing was unusual.

But it is. The Zero’s bulk between the steering stem and the electric motor, located just ahead of the rear wheel, is almost entirely battery. A base pack, rated at 6-kilowatt-hours capacity, is joined by a 9-kWh set of lithium-ion batteries. A 26-horsepower motor—brushless, permanent-magnet AC, to be more specific—connects to the rear wheel through a toothed rubber belt. These two upgrades are new in the last year and provide a quiet, more responsive ride. No gearbox to be found, either; the electric motor’s impressively wide torque curve gives the Zero adequate acceleration from a standstill to the motor’s redline of 6300 rpm. That’s 84 mph, by the way. 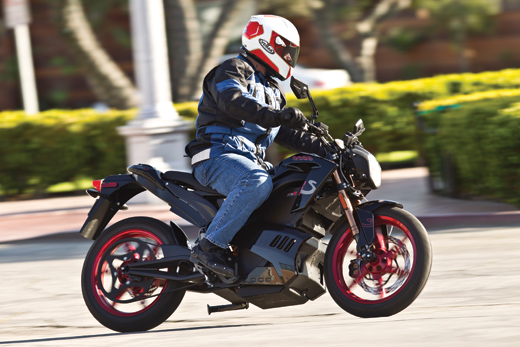 At home in the suburban environment, the Zero S keeps ahead of traffic and never has to visit a gas station—unless you want to inflate the tires.

Your first ride on the Zero S is a bit disconcerting. It stands at the ready, making not a sound. There are a couple of clicks as you turn the key and the system runs through its self-test functions. Then the instruments come alive and you find yourself astride a totally silent vehicle that’s nevertheless ready to go. This sensation is similar to the few electric aircraft I’ve had demonstrated to me. The pilot switches the system on and double- (no, actually, triple-) checks that no one is near the prop. Advance the throttle lever, hear a slight hum, and then the prop is turning. Just like that.

Turn the twist-grip on the right handlebar a little and still nothing happens. Turn it a little more and the bike eases forward at about the pace of someone pushing you forward, if you were trying to push-start the bike. Get to about half throttle and the Zero moves off with the aggressiveness of a small scooter. Soon you find yourself making full-throttle launches to stay ahead of traffic. This is how I imagine electric aircraft will be—an odd sensation of no noise, no vibration, nothing really happening as you taxi out for takeoff. Think of sitting there, waiting for a takeoff clearance at a big-city airport—rather than watching the gauges and worrying about cylinder-head temps, you’ll be there with the prop sitting still and only the chatter on the radio to keep you company. 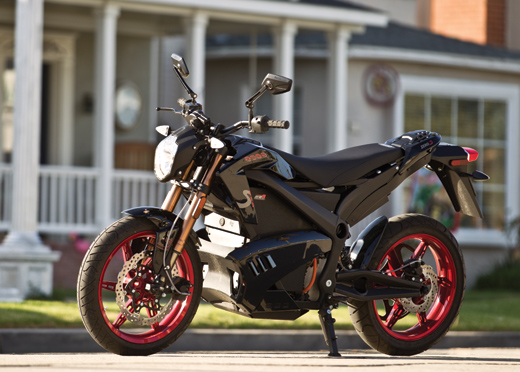 Clever packaging hides the fact that the entire center of the Zero is battery. It’s “all ate up with volts,” as Darrell Waltrip might say.

The way you must ride the Zero to maximize range is what I expect we’ll experience with electric aircraft. Hard acceleration from a standstill requires a tremendous amount of current. Jackrabbit starts eat more of the range, relatively speaking, than is the case with a gasoline motorcycle. So I expect that with electric aircraft, we’ll use maximum power only as long as safety warrants, and pull quite a way back for the climb.

To boost range, the Zero motorcycle has two modes, Eco and Sport. Eco limits power slightly, further softens power response to the throttle and increases the amount of regenerative braking. (Regen, as it’s often called, turns the motor into an alternator as braking begins, putting some of the vehicular energy back into the battery pack.) Opportunities for regen are somewhat more limited for aircraft except during the final descent for landing, though it’s not a big leap to imagine a computerized autopilot that seeks to maintain a set indicated airspeed—probably right at or near the ideal lift-over-drag (L/D) speed for economy—and throttles the motor to recover some energy in downdrafts.

Range will be the big issue for electric aircraft, as it is for electric motorcycles. This year, the Zero has increased range thanks to the larger battery pack—as much as 114 miles on the EPA’s UDDS (urban dynamometer driving schedule) test, according to the company. In the real world, ridden by someone not concerned with range, the range goes from a low of 48 miles on one charge (using the Sport mode) to 64 miles (in Eco mode). These are but a few data points, based on a 70/30 split of urban/highway riding at typically elevated Los Angeles freeway speeds. This range doesn’t seem particularly impressive, but the previous electric bikes were doing well to make 30 miles on a single charge. Topping up the Zero’s batteries should cost $1.35 at the typical rate of 15 cents per kilowatt.

And This Means What?

Good question. Motorcycles and airplanes are very different, it’s true, but the development effort focused on cars and bikes will definitely pay dividends. As batteries shrink with the same potential energy, they make more sense for aircraft. As motors and controllers become more efficient, an aircraft designed for a specific endurance needs less battery capacity. Costs are coming down across the board.

Finally, perhaps just as important as the technological developments, these new aircraft will look new, different, unusual. Will that be enough to get new faces into our world? I don’t know, but it certainly can’t hurt.