While it could be argued that the mainstream aircraft engines used in homebuilts haven’t changed substantially in the 25 years KITPLANES has been in existence-the names have changed, and the look of alternative engines sure has metamorphosed in that time-the tools we use to keep track of them most certainly have. And though its true you cant literally peer into the crankcase or combustion chamber during flight to check on the engines health, you can, by interpolation and experience, understand much of whats happening ahead of the firewall. 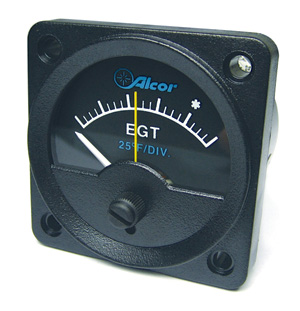 You can thank modern engine monitoring for that little tidbit of internal-combustion insight.

Twenty-five years ago, engine monitoring as we know it was just starting to appear, albeit in pretty rudimentary form. Basically, pilots relied on the usual indicators for oil temperature and pressure, a tach for engine speed, a manifold pressure gauge and perhaps a cylinder-head temperature (CHT) instrument. (In certified aircraft, designs with a cowl flap were required to have a CHT, but few homebuilts at the time did.)

A mechanical engineer by the name of Al Hundere is widely considered responsible for the advancement of monitoring exhaust-gas temperature (EGT) in piston aircraft. His company, Alcor, produced the first economical EGT instruments in the 1960s, which soon found favor with pilots of high-performance aircraft. At the time, the state of the art for piston-engine technology was advancing with surprising speed, as the demands for more power pushed for turbocharging, higher compression ratios and loftier rev ceilings. (Anyone who has listened to a Cessna 185 take off with its Continental IO-520 screaming along at 2850 rpm and the long-blade props tips going transonic, appreciates what agony the engines were put through for just a few extra horsepower.)

The problem with this push for more power was that the engines were becoming fragile. From the days of the Piper Cub and its modestly powered contemporaries, where a low-compression engine had no trouble keeping cool and thereby living a long time, general aviation found itself with engines producing well more than one-half horsepower per cubic inch. (The geared GTSIO-520 produced 375 horsepower, nearly three quarters of a horsepower per cubic inch.) To do so put great strain on the materials used-and, to be fair, the ability of the factories to actually build the things-as well as the thermodynamics. Engines ran much closer to their detonation limits, lived with CHTs and oil temps at the top end of the range, and were far more susceptible to damage from bad fuel or improperly timed ignition. 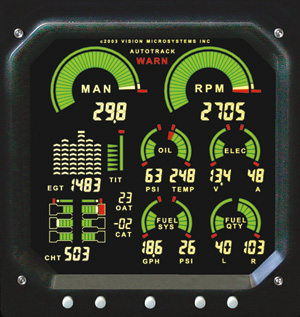 Adding an EGT gauge to the cockpit gave the pilot important comprehension of the engines health and behavior. Once the relationship between EGT, CHT and fuel flow is understood over a range of operating conditions, any time the engine suffered a problem, it was comparatively easy to know that the problem existed. Thats half the battle, and by careful use of EGT data, it was also possible to help lead the expedition for the solution.

Engine monitoring at the time of this magazines birth was likely to be a combination of the old and the new. Traditional analog gauges were still the choice of most builders, but we had started to follow the certified types by switching to the EGT and CHT gauges so that all of the cylinders could be monitored. In the early 1980s, both Electronics International and JP Instruments had digital instruments that could scan the various channels and display the numbers to the pilot sequentially. This feature was an improvement because the pilot didn’t have to actively switch among the inputs, but it still required a steady gaze and good short-term memory.

A genuine breakthrough came with the Insight GEM-for graphic engine monitor-first shown in the summer of 1981. This instrument used a gas-plasma display with all four or six cylinders shown simultaneously; EGT was presented by the total bar, and a missing bar indicator gave the CHT relative to a scale printed on the face of the instrument. Neither set of indicators had great resolution-CHT was only 25 a bar-but the ability to see what each cylinder was doing all the time far outweighed this shortcoming. Soon, all the major manufacturers had a version of this graphic display; JPI quickly discovered the importance of a digital readout to give the bar values to a single digit. 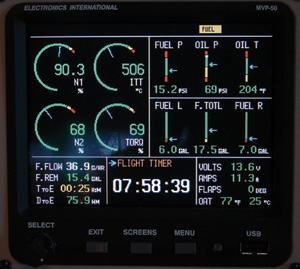 A sea change in engine instrumentation came with the Vision Microsystems VM1000, launched the same year as this magazine. It took the ideas of a graphical engine instrument to the next logical step but combined the technology with the concept of an all-in-one unit. One box now held every engine instrument plus virtually all the airframe instruments-things like volts, amps, fuel level and so on-in one place. It also consolidated a warning and annunciation system that was all but impossible with discrete gauges. And while the VM1000 was more challenging to install and set up, it did much to clean up the instrument panel and push builders into having a comprehensive set of instruments. Around this time, too, flow transducers that could measure the rate of fuel consumption were becoming less expensive, giving rise to the fuel computer-easily the most safety-enhancing instrument you can buy.

From the VM1000s lead, the industry grew to what we have today: incredibly sophisticated, combined engine monitoring systems from all the familiar companies plus a bunch of newcomers who have helped push the next wave. That step has meant the integration of engine monitoring with flight instruments, which provides the pilot with an unprecedented amount of information in one place, with suitable redundancies and all viewable in unimaginably customizable ways. Safety and convenience are the benefits. Given how far we’ve come in 25 years, who knows what might be next?

Aircraft Designer Martin Hollman tries his hand at forecasting what personal airplanes will look like in the oh-so-distant year 2000. Among his predictions: airplanes will be composite-70% graphite with a Nomex honeycomb core and the remainder glass and Kevlar. The graphite will be synthetic Dacron fiber that is charred at very high temperatures after weaving so that it becomes virtually indestructible. Planes will also be pusher configurations, for more pilot/passenger comfort, greater visibility, less vibration and improved aerodynamics. The plane of the future will fly faster on the same power thanks to improved highly laminar flow achievable with the pusher/composite construction. Fowler flaps or other high-lift devices will be necessary to produce acceptable landing speeds. Small canard surfaces will be used for trim control. The airplanes of 2000 wont be pressurized, cockpits will be large enough for large people, and staggered seating wont be required. Fuselage frontal area wont be as critical as once believed. A teardrop as used on the Questair Venture will work fine, he says.

Jim Loyds Kit Tips this month addresses how to build a better gas cap, fabricating a fiberglass battery box and a rivet dimpler/squeezer you can make yourself from a 9- or 10-inch Vise-Grip.

In an article titled A View from Moscow author Yuriy Krassin details plans for his land-sea-air vehicle concept, the Autocraft. As a motor-sailer, the Autocrafts wings will convert to either rigid or conventional soft sails. Without the sails, the Autocraft is a true powerboat, propelled by a water-jet prop. In the aircraft configuration, the Autocraft is projected to have a 4500-mile range. It will have retractable gear, 100-mph cruise and a maximum takeoff weight of 1852 pounds.

Edward Collins writes about Hirth engines for homebuilders, including the 25-horsepower F22, the 50-hp F23, the 28- to 31-hp 263, the 55- to 60-hp 2703 and the 95-hp F30. A side-by-side comparison with Rotax engines is included. At this time, the Hirth engines had accumulated some 1000 hours without major servicing, the article said, and the manufacturer was so confident of the engines reliability that it was offering a one-year warranty on all engines along with a six-month warranty on specified additional repairs.

Among the Completions published this month is Norman Alberts Polliwagon. Albert writes that he was among the lucky ones when Polliwagon went belly up, lacking only the landing gear for his airplane. His was the first of its type to fly to Sun n Fun (1989).

Jim Loyds Kit Tips this month include instruction on how to build your own fabric tension tester and fabricating cooling blast tubes for magnetos. The trick for those cooling blast tubes: Brass sink drainpipe works well to make the tube curved.

Among the new products this month: the Altitude Nag from Airsport Corporation. The Nag is an altitude-variation indicator that plugs into the blind encoder without wires or connections. It monitors the output from the Mode C encoder and flashes a warning on the panel if an altitude variation is detected. It weighs 7 ounces, and occupies a 1×2-inch space on the panel. Two buttons operate the system. Price: $99.

In Around the Patch, Dave Martin announces production of two new aircraft engines: the four-stroke, six-cylinder, direct-drive Sadler radial and the Dyna-Cam 12-cylinder, 200-hp engine. Tuned exhaust and a turbocharger would yield 250- and 450-hp models. The $4400 price on the Sadler included an Ellison throttle body injector and Mallory dual ignition.

In coverage of the 1989 Arlington fly-in, it is mentioned that Dennis Fetters made his first appearance at the show, flying his Air Command Elite gyroplane. Fetters went on to become well-known for his Revolution Helicopter Corporation, which offered the Mini-500 single-seat helicopter kit. The company went out of business some 10 years later after there were a number of fatal crashes in the helicopter.

An article by Cy Tymony touts the future potential of voice-recognition systems for aircraft that would alleviate the need for hands-on flying (!). What makes this possible, the author says, is PC card add-on boards and single integrated circuit chips for less than $10 that can perform the necessary functions. Drawbacks include the need to speak clearly lest the command be misinterpreted.

Dean Sigler - January 18, 2013
0
One plane, one pilot, 5 tons of garbage: How Jeremy Rowsell plans to crisscross the globe in a Cessna 172 powered by fuel made from recycled plastic. By Dean Sigler.