Home Newsline News What a Shock! Electric Airplanes Are Abuzz at OSH 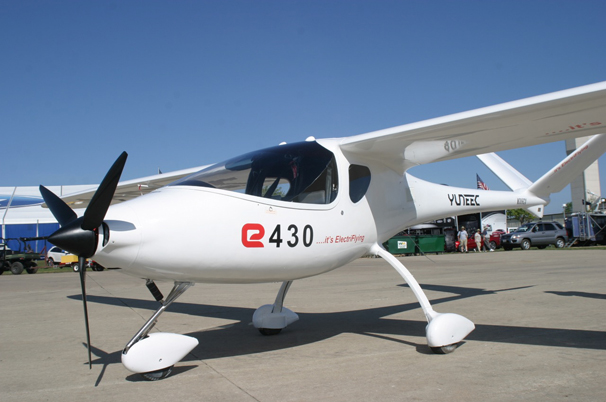 EAAs AirVenture is always hosting innovation in aviation, and Yuneec International took full advantage of the shows reputation by showing a Chinese-built electrically powered airplane. Aptly pronounced unique, the firms composite-construction two-place motorglider is on a fast track to development and production, according to company representatives.

When plans were finalized earlier in 2009 to have the plane at Oshkosh, only the wing and tail had been completed. Reportedly, 20 engineers worked around the clock to make the commitment a reality. The aircraft was test flown for 30 minutes in China, then crated for shipment to California, where test pilot Dave Morss logged 22 hours of additional time.The prototype, built in three months, is a 45-foot wingspan, high-wing trigear design, borrowing heavily from the electrically powered radio-control market, once dominated by glow-ignition engines running on alcohol-based fuel but now 80% powered by electric motors, largely from China. Yuneec began with a 450-pound unmanned vehicle, then committed to a two-seat motorglider in late 2008.

The powerplant is a 40 Kw (54 hp) motor weighing 37.5 pounds, driven by three or five lithium polymer batteries weighing 57 pounds each. Flight duration is around 1.5 to 2 hours with three batteries; recharge time is about 3 hours. All-up empty weight of the prototype is 550 pounds, and takeoff weight is about 1050 pounds.

The target price of the E430 Yuneec electric aircraft is $89,000 in standard configuration. Cost of operation should be about $2.50 per hour; battery replacement life is quoted as 1500 hours. First deliveries are projected to take place in late 2010 or early 2011.In addition to offering fully-built aircraft, Yuneec also expects to sell its powerplant technology to other manufacturers. A test installation is in a Flightstar Spyder ultralight, as well as a Flight Design LSA, where it is being investigated as a hybrid power source to be used in conjunction with a Rotax 914 piston engine. Flight Designs test bed will use a 40-hp motor with a belt drive to boost takeoff and climb, and to stretch a glide in the event of the piston engines failure.