The line features seven new second-generation G3X hardware products with more capabilities, including a built-in autopilot, that should be appearing in aircraft later this year. Garmin’s commitment to meeting the market’s needs extends beyond hardware and software. The company has formed a new division named Team X, that is staffed with experienced builders and pilots of homebuilt aircraft. The team members understand the needs of the average builder because that is what they are.

The original G3X system provided a robust ADAHRS and engine monitoring package, displays and sensors that gave builders a complete electronic flight instrumentation system (EFIS) in several different configurations. Single-, dual- and even triple-screen configurations have been installed, with one unit normally including XMWX weather and audio. The G3X was designed to interface with IFR navigators such as the GNS 430W or the newer GTN 650/750. The integrated GPS within the G3X display provides excellent backup capability—or primary GPS navigation for VFR-only ships. The G3X was designed to interface well with autopilots from TruTrak Flight Systems and Trio Avionics, providing coupled instrument approach capability. The system has proven popular and has competed favorably in both price and capabilities with the other high-end experimental EFIS systems on the market. 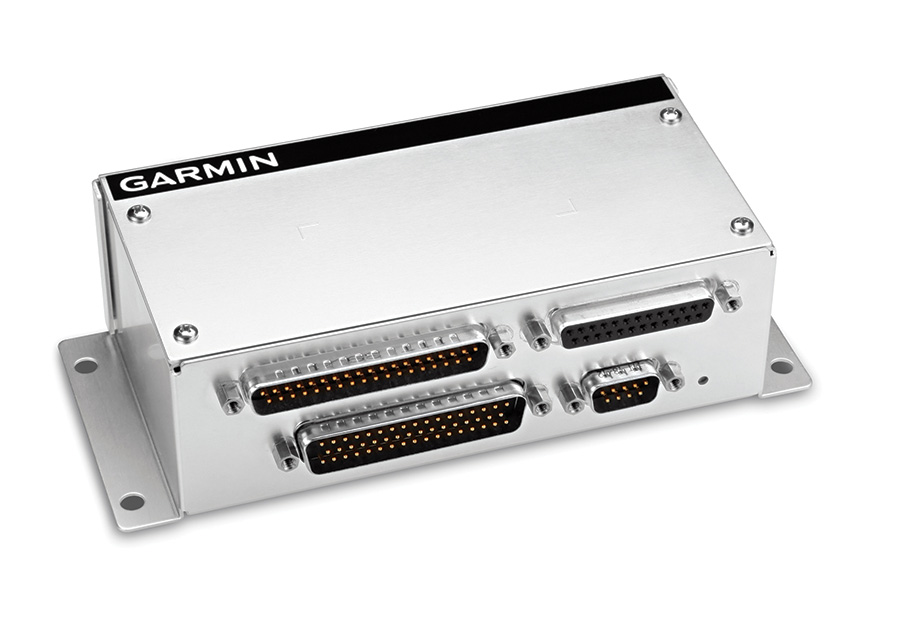 The new GEA 24 is a lightweight engine monitoring system that can be mounted near the engine and provides data to the G3X via the CAN buss.

Not one to leave good enough alone, Garmin listened to its customers and small group of dedicated in-house aircraft builders and has improved the system. That meant doing more than writing new software. The latest generation of hardware is more flexible and designed to install more easily than the earlier G3X. They have repackaged the ADAHRS and EIS into separate units, shrinking both in the process. Gone are the high-density pins that made wiring the EIS harness a challenging proposition. The new connectors are standard D-sub pins and sockets that builders are much more familiar with. For those concerned with redundancy, the new ADAHRS architecture allows dual or even triple ADAHRS to be used in the system—something other manufacturers had previously incorporated and builders of IFR systems were asking for.

Probably the biggest advance for the new G3X hardware is the introduction of Garmin’s own line of autopilot servos, a panel controller, and internal autopilot software. For the first time in the experimental market, Garmin is now offering an integrated EFIS/autopilot package all their own—a step taken by several other experimental EFIS companies in the last few years.

With primary control through the EFIS displays, the new Garmin system incorporates a dedicated autopilot control panel that will continue to function with the servos and ADAHRS, even if the pilot’s EFIS displays are unavailable. Because the autopilot still relies on the ADAHRS, Garmin recommends a separate attitude indicator be installed for redundancy in IFR conditions. Autopilot functionality, however, is greatly enhanced when integrated into the EFIS software and the G3X now gives pilots that capability. 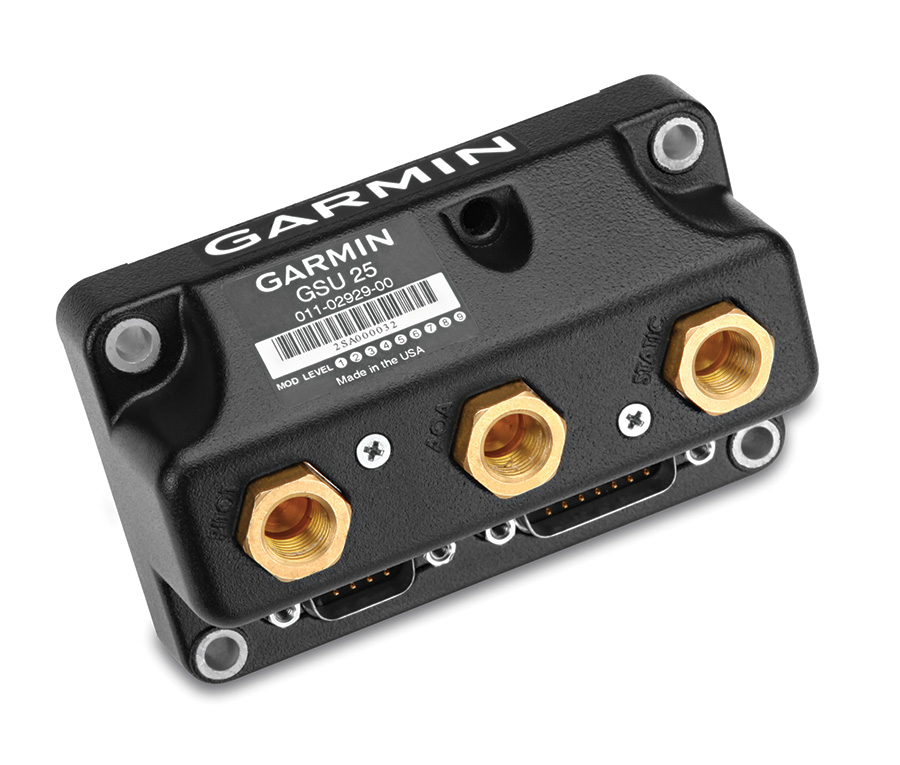 The GSU 25 is Garmin’s latest ADAHRS. Barely larger than the connectors needed to interface it with the rest of the EFIS, a builder can choose to have multiple units for redundancy.

The list of new G3X hardware begins with the GSU 25 ADAHRS. Those familiar with the original G3X ADAHRS, the GSU 73, may be shocked at the tiny size of the GSU 25, the case of which seems sized primarily to hold the three pitot/static/AoA taps and the necessary D-sub connectors. Multiple GSU 25s can be connected to provide up to triple redundancy, and the 25 can also be used with the older 73, allowing an existing installation to add one or more levels of ADAHRS redundancy without major rewiring. The GSU 25 communicates with the rest of the system components on a CAN buss that is common to all of the displays and servos. The units can share magnetometers and temperature probes, or have independent sensors of each type for added redundancy.

Since the older GSU 73 provided engine monitoring as well as the ADAHRS, the new GSU 25s need to be paired with a separate EIS. This function is provided by the new GEA 24, a compact box that incorporates standard-density D-sub pins and sockets for ease of harness building. The lightweight EIS box can be mounted near the engine and communicates with the rest of the system via the CAN backbone of the G3X. Designed to interface with the standard probes used on many Lycoming and Continental engine installations, the new box also includes a CAN FADEC interface for those using the new Rotax 912 iS engine. 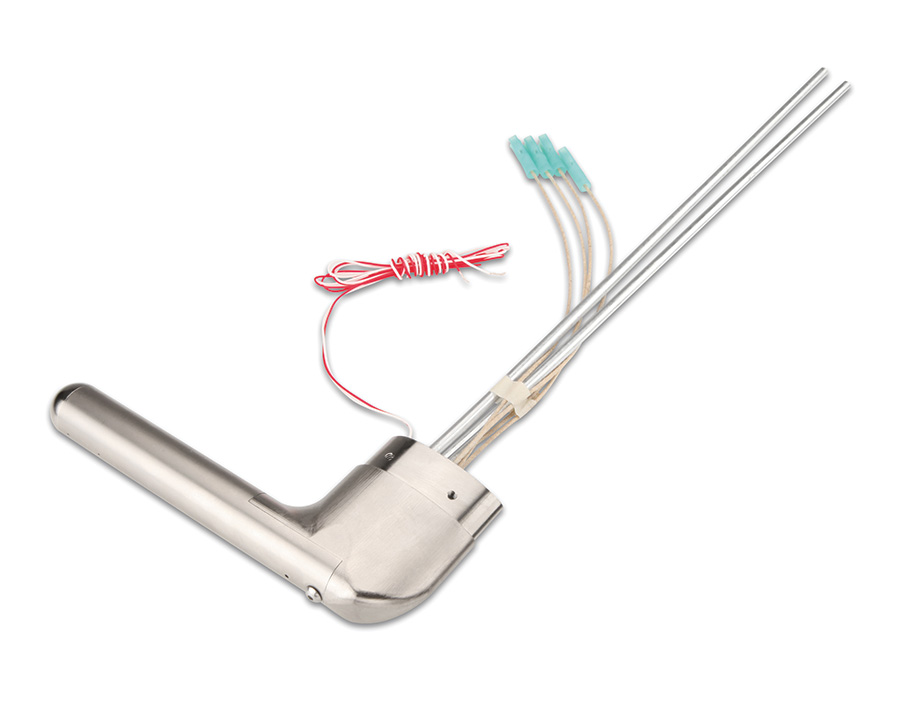 The GAP 26 is a pitot tube that includes a tap for angle-of-attack information. It is available in unheated and heated configurations.

Recognizing that angle-of-attack monitoring is an important cue for stall prevention, Garmin is now providing their own two-port pitot tube to allow the G3X to compute and display AoA to the pilot. The GAP 26 pitot probe will be available in unheated, heated, or heated/regulated configurations and uses a mounting template common to many probes in use today.

For many builders, the most exciting aspect of the new offerings will be the integrated autopilot components, including the all-new GSA 28 servo and the GMC 305 control panel. The new servo features a brushless DC motor and a clutch so that there is no significant drag on the controls when the autopilot is disengaged. The onboard electronics communicate with the rest of the G3X via the CAN buss architecture, and for those considering retrofitting from an existing autopilot, they use the same footprint and mounting pattern as other popular experimental servos, despite weighing considerably less. 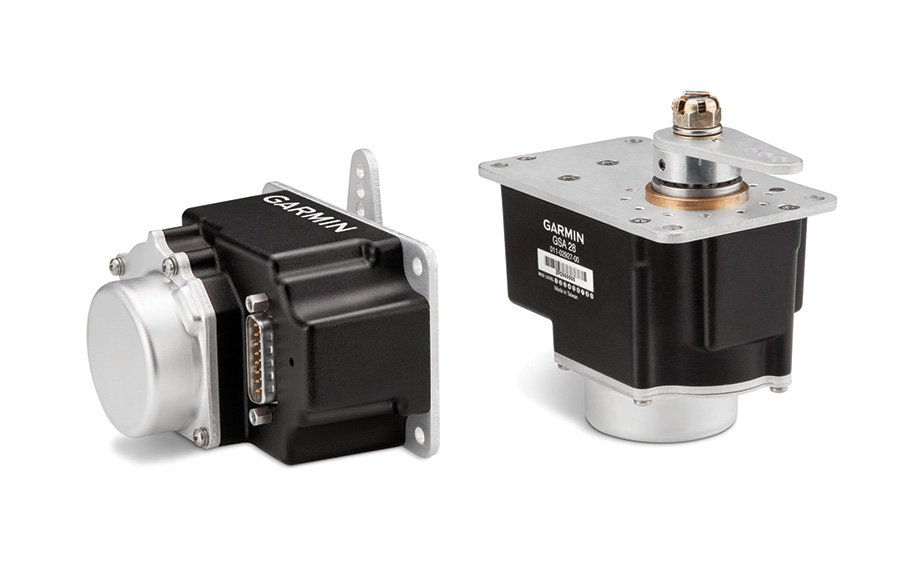 Garmin’s new lightweight brushless DC motor servos have a clutch, so when the autopilot is disengaged, they add no drag to the control system.

The GMC 305 autopilot control panel provides standalone control capability (independent from the G3X displays) for leveling the aircraft, holding altitude, or control-wheel steering. It also adds the capability for the G3X to display command bars, hold a climb based on airspeed, and can even provide a yaw damper (with the addition of a rudder servo) for airplanes with a tendency to wag their tails.

Garmin isn’t stopping with new hardware and software; they have also listened to those in the community who might have chosen Garmin, but were held back by cost. Lower prices are an important part of the new architecture, with a single display system now selling for $4,375, a savings of $1,620 from the previous architecture. Adding a dual-axis autopilot raises the total by only $1,500 to $5,875. The dual-display system will now run $6,495 for a savings of slightly more than $2,000 over the original design, and a three-display package will retail for $8,495 (plus the same $1,500 for autopilot capability with both multi-screen systems). Adding the separate GMC 305 autopilot control to the panel adds $750 for any system, but the autopilot will function using EFIS display control alone, without the GMC 305.

Rounding out the architecture changes, Garmin will also provide a new ARINC interface box to allow full connectivity with their GTN 650/750 line of IFR navigators. ARINC was built in to the older GSU 73 ADAHRS/EIS box, and many customers building VFR-only machines didn’t need it, so packaging it as a separate unit gives customers more options to save money. There will also be a remote-mount version of the popular GDL 39 ADS-B unit that Garmin introduced last year, the GDL 39R, for those wanting to build an ADS-B-compliant package from the very start.

With these changes and additions to their lineup and organization, Garmin is clearly going after the Experimental market in a big way. With lower prices, more flexibility, and additional capability, the G3X will be a tempting choice for Experimental builders looking for a new EFIS for their project aircraft.

One of the things we often hear from homebuilders who are discussing avionics is that Garmin is simply too big to understand the needs of people building airplanes in their garage or small workshop. It shouldn’t surprise folks with suspicions about the “Big G” that Garmin heard those comments and has responded with Team X—a new Garmin engineering team that’s exclusively dedicated to designing products for experimental and Light Sport Aircraft. Long-time design and support engineers at Garmin, they’re also pilots and homebuilders (or soon to become one). That means they’re all about creating the kind of smart, cost-friendly avionics they’d want for their own aircraft. They know what homebuilders need and want—because they know what it’s like to scrimp and save for the right radio or display.

The members of Team X all have one thing in common: a passion for creating solutions that are both capable and affordable. After all, they’re not just Garmin employees—they’re customers as well. Here are a few of the guys on the team:

John X – started out as a line boy and moved up to pilot corporate jets, then became a software engineer. His first ride in an RV got him hooked, and he is now building an RV-9A.

Steve X – started with radio control, moved to ultralights, and the next logical step was a full-size airplane. He now flies his G3X equipped Long-EZ when he isn’t developing new software for Garmin.

Lee X – began reading Kitplanes® Magazine when he was 15 years old and was immediately captivated by the idea of building and owning his own aircraft. A technical writer for the Garmin team, he is now building an RV-7.

Matt X – is a staff engineer for Team X and was impressed early in life by the performance of kit airplanes. He sold his factory airplane for a flying RV-9A, and then sold that to finance the building of his current project, an RV-7, so that he can have a custom airplane finished exactly the way he wants it.

Tim X – enjoys the interaction with Garmin’s experimental customers in his role as a Field Service Engineer for the team and dreams of building his own airplane someday.

Joe X – is in the planning process for an RV-8 and is, in the meantime, flying a rented Skycatcher. He looks forward to building and flying an airplane equipped with avionics that he helped to build.