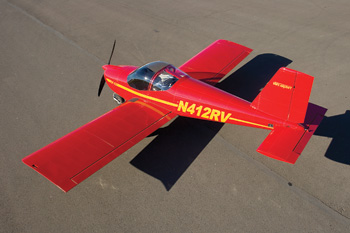 The horizontal tail has several functions, all of which are vital to providing acceptable flying qualities. The tail must stabilize the airplane in pitch. It must also trim out pitching moments caused by the wing, body and c.g. changes. Finally, the tail must provide control power so the pilot can maneuver the airplane. The designer must take all of these requirements into account when defining the size and configuration of the tail.

The pitch stability of an airplane determines how it responds to an angle-of-attack disturbance. The disturbance can come from a variety of sources including turbulence, control movements or power changes. A stable airplane is self-correcting. It will resist any perturbation that tries to deflect its flight path. If the nose of the airplane is raised, a nose-down pitching moment will be created, which will push the nose back down. If the nose is lowered, a nose-up pitching moment will be created, which will tend to raise the nose.

Control surface characteristics also play a major role in determining the stabilizing effect of a tail. With the stick free, the elevators will tend to float with the wind. This means that they do not provide as much stability as they would have if they were held fixed. The floating tendency of the elevators is very dependent on details of the elevator geometry. Aerodynamic balance tends to reduce elevator float. Elevator chord and the details of the trailing-edge shape can also have a large effect.

Float can be a major issue with an all-moving tail. If the tail is hinged too far forward, the whole tail will float with the wind if the stick is free. From a stability viewpoint, this is aerodynamically equivalent to removing the tail. Designers counter this by hinging the all-moving tail at or near the 25% chord point, which eliminates both float and, unfortunately, any tendency for the tail to resist being deflected by the pilot. This will cause the airplane to be oversensitive in pitch, so an anti-servo tab is added to provide artificial pitch feel. A properly done all-moving tail can actually have some advantage over a fixed tail plus elevator setup because it does not have elevator float. This means that the stick-free and stick-fixed stability will be the same for the properly balanced all-moving system. The same effect can be achieved with an elevator by proper use of aerodynamic balance and either an anti-servo tab or centering springs. The Questair Venture used such a system.

The second function of the horizontal tail is to trim the airplane. When the airplane is in steady flight, all of the moments acting on it must be balanced so that there is no net moment about the center of gravity. An airplane that is in this state of moment equilibrium is trimmed. If the airplane is not trimmed, it will pitch either up or down.

The tail load required to trim will change with angle of attack of the airplane and the position of the c.g.  To trim the airplane at differing flight conditions, the pilot must be able to control the lift (or down force) of the tail. There are two ways of doing this. The first is to hinge the trailing edge of the tail to form an elevator surface attached to the back of a fixed tailplane. The pilot can change the camber of the tail by deflecting the elevator and hence change the lift of the tail.

The second approach is to pivot the whole tailplane so that the pilot can control the angle of attack of the tail directly. Combinations of these two approaches are not uncommon. Some airplanes have an elevator as the primary pitch control but also have variable-incidence tails. The pilot can adjust the incidence of the fixed portion of the horizontal tail to trim the airplane. Conversely, most airplanes with all-moving tailplanes have large, elevator-like tabs hinged to the trailing edge of the tail to control hinge moments and increase control power.

The third function of the horizontal tail is pitch control or maneuvering. It is similar to trim in that the tail is used to generate pitching moments. When the pilot wishes to change the attitude or flight path, he must generate a moment that will pitch the airplane. This moment is different from the moment required to trim the airplane, as the pilot is deliberately putting the airplane out of trim to generate a pitch rate.

The horizontal tail of an airplane must be able to generate enough pitching moment so that the pilot can control the attitude and flight path at any point in the flight envelope. There are some flight conditions that require special attention when considering the control power required from the horizontal tail.

One of these critical conditions is nosewheel liftoff during takeoff. If the airplane has tricycle landing gear, the pilot must be able to rotate the airplane to a positive angle of attack for liftoff. It must be possible to lift the nose wheel at an airspeed below the stall speed with the airplane loaded to its most forward c.g. position. FAR part 23 requires that an airplane be able to lift its nosewheel when rolling at 85% of stall speed.

Another critical flight condition for tail sizing is the landing flare. With an airplane at its most forward c.g. and the flaps and landing gear down, the pilot must have enough pitch control available to trim the airplane and to bring the nose up in the final flare maneuver. To satisfy this last requirement, the airplane must have somewhat more control power available at normal landing speed than is necessary to simply trim the airplane. The pilot must be able to produce a nose-up pitch rate from the trim condition to flare the airplane and arrest its sink rate before ground contact.

The need for trim, stability and pitch control power place requirements on the design of the horizontal tail.

Stalling of the horizontal tail will usually result in loss of control, and it is of particular concern for airplanes that use all-moving tails because the pilot can change the tail angle of attack over a large range.

There are several situations in which tail stall can be encountered, and some can be extremely dangerous. One condition that has proven troublesome is the full-flap, forward c.g. configuration. In this situation, the tail must produce a large download to trim the airplane. If the tail is too small or stalls at too small a negative angle of attack, a small change in tail incidence such as the deflection required to trim the airplane in a turn can cause the lower surface of the tail to stall. If this happens, the airplane will pitch down, and the pilot will not be able to prevent it from doing so.

On early versions of one production light airplane, the pilot could not regain control until the airplane had pitched over to an inverted attitude. This caused accidents before the condition was diagnosed and could be fixed. The remedy was to put fixed slots in the leading edge of the tailplane to increase its stall angle of attack. Increasing tail size, changing tail airfoil or restriction of tail travel and c.g. can also solve this problem. Tail stalling can also be a problem when trying to recover the airplane from high angle of attack flight. This problem is more typical of modern fighters that fly at very high angles of attack.

Front Seat in a Pietenpol