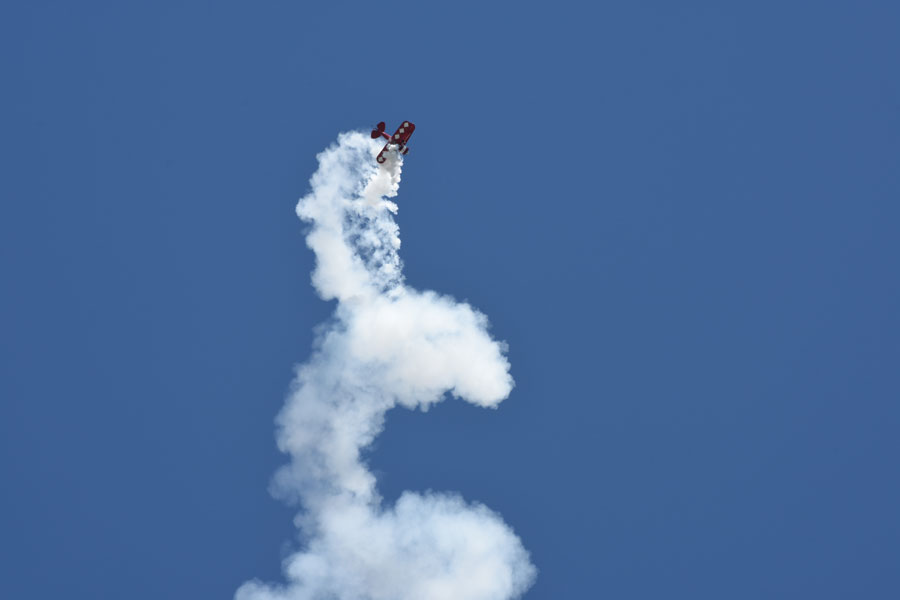 Propeller gyroscopic moments can drive an airplane into tumbling maneuvers the aerodynamic controls alone could not produce.

For the past few months, we have been looking at the aerodynamics and propulsive efficiency of propellers.

There is another set of propeller effects that are sometimes important and often ignored. The blades of the propeller have significant mass, and the rotating propeller has a considerable angular momentum. The inertial characteristics of this rotating mass can affect the stability and control of the airplane.

A rotating propeller acts as a gyroscope. In certain situations, the gyroscopic effects produced by the propeller can produce unexpected behavior of the airplane.

Before discussing how the propeller-gyroscope affects the airplane, we must first look at gyroscopes in general. This could get a little more technical than is usual in “Wind Tunnel,” but bear with me and I will try not to make your head spin like our example propeller.

The phenomenon which causes the effects we normally call “gyroscopic” is called precession. Precession arises from the law of conservation of momentum, which says that the total momentum of a mass remains unchanged unless an outside force acts on the mass. In the case of a rotating mass, we are concerned with conservation of angular momentum. Angular momentum is proportional to the moment of inertia of the object and the rate of rotation.

One common example of the conservation of angular momentum is the way figure skaters use the position of their arms to control the rotation rate of a spin. The spin is started with the arms extended. Pulling the arms into the chest or placing them overhead causes the spin to accelerate dramatically. The reason for this is conservation of angular momentum, combined with the effect of arm position on the skater’s moment of inertia. By pulling in their arms, skaters reduce their moment of inertia by decreasing the length of the “rod.” In order to conserve angular momentum, the spin rate increases to compensate.

This gyroscopically-induced cross-coupling is not usually apparent to the pilot of a normal, tricycle-gear light airplane because the pitch and yaw rates used in normal flight are relatively small and the mass of the propeller is small compared to the mass of the airplane. There are some situations in which these effects can become significant. These usually involve a combination of high pitch and/or yaw rates, low airspeed, and high power setting. The high angular rates give rise to larger gyroscopic moments, and the low airspeed means that the aerodynamic forces available to oppose the gyroscopic effects are smaller.

During takeoff in a taildragger, gyroscopic moments can surprise a pilot when he lifts the tail. The nose-down pitch rate used to raise the tail can be large, particularly if the pilot is abrupt on the stick. The engine is at full power, so the rpm of the propeller is high. When the tail is raised, the gyroscopic effect of the prop will cause a left yaw, which can be exacerbated by the inherent directional instability of taildragging landing gear. The airplane will tend to dart toward the left side of the runway unless a right rudder input accompanies the forward stick applied to bring the tail up. This condition is particularly familiar to the pilots of airplanes like the Pitts Special, which combine large propellers, high power, and relatively small, short airframes.

In normal flight, most airplanes do not experience significant propeller gyroscopic effects. This was not true in the days of rotary engines, which were common on WW-I fighters such as the Sopwith Camel. In a rotary, the whole engine spins with the propeller. The mass of the engine/propeller gyroscope is much more than if the propeller alone was spinning, and the gyroscopic effects are correspondingly large. In some situations, the gyroscopic moments produced by rotary engines were so large that they could overpower the aerodynamic controls of the airplane.

It was considered extremely dangerous to make a right turn in a Camel, or other high-powered rotary-engine fighter right after takeoff. If we refer to the table in the left column, we can see why. In a steady banked right turn, the airplane is yawing to the right and pitching up relative to its flight path at any given time. The nose-up pitch produced by the elevator back pressure required in the turn causes a gyroscopic right yawing moment, which tends to tighten the turn. The right yaw of the turn causes a nose-down gyroscopic moment.

You can see how this would get a pilot in trouble. The airplane would respond to a right turn entry by nosing down and tightening up its turn. At low airspeed, the pilot might not be able to recover before arriving at the ground. The bright side of this rather bizarre characteristic of rotary engines is that the good fighter pilots (the ones who survived learning to fly the airplane) learned how to use the gyroscopic moments to drive the airplane through very abrupt turns which proved useful in combat to evade an enemy, or to rapidly point the nose for a snap shot at an opponent.

In the more modern world, there are two classes of airplanes that experience significant propeller gyroscopic effects in flight. The first of these are ultralights and other very light airplanes. These airplanes are typically powered by fast-turning engines, which drive relatively large propellers through gearboxes or other prop-speed reduction units. Because of their low wing loadings and slow flying speeds, this class of airplane has a very small radius of turn. The small turning radius causes these machines to have a relatively high pitch and yaw rate during the turn. The combination of a relatively large (high inertia) propeller and a large pitch and/or yaw rate makes the gyroscopic moment from the propeller large enough, relative to the aerodynamic moments the controls can generate at such low airspeeds, that they become noticeable to the pilot. While the effect is nowhere nearly as pronounced as that experienced on rotary-engine airplanes, it is noticeable. In a turn in the direction of the propeller rotation, the nose will tend to drop, and the turn will tighten, particularly if it is a steep turn to begin with. When turning opposite to the propeller rotation, the pilot will have to hold extra rudder to coordinate the turn.

The other place where propeller gyroscopic effects are significant is in aerobatics. Aerobatic maneuvers involve much higher pitch and yaw rates than normal flying, so pilots must compensate for gyroscopic effects in order to perform clean maneuvers. For example in a loop, particularly near the top where the airspeed is low, rudder is required to keep the airplane straight. This situation is amplified by the fact that aerobatic airplanes typically have a lot of power for their size, and correspondingly large propellers to efficiently convert that power into thrust. The combination of a large prop (high inertia) and a lot of power (high rpm) leads to large gyroscopic moments.

To an aerobatic pilot, propeller gyroscopic effects are not all bad. In fact, they are used deliberately to make some of the more dramatic-looking maneuvers possible. The simplest of these is a flat spin. In a spin, the yaw rate is very high. When the airplane is spun power-on, it will tend to nose up due to propeller precession when the spin is opposite to the direction of rotation of the propeller. By deliberately keeping the propeller rpm up and spinning in the proper direction, an aerobatic pilot can force the airplane to spin flat.

Other, more spectacular maneuvers are performed by inducing large pitch and yaw rates with the elevators and rudder, causing the propeller gyroscopic moments to drive the airplane into maneuvers the aerodynamic controls alone could not produce. The most famous of these gyroscopically induced tumbling maneuvers is the Lomcovk. More recently, as aerobatic airplanes’ power-to-weight ratio has increased, maneuvers with more than one tumbling rotation, including the knife-edge spin and the shoulder roll have appeared.

All of these maneuvers work in essentially the same way. The pilot places the airplane in a zero-G trajectory to unload the wings so that the airplane can develop high rates without excessive G-load onset. A combination of control inputs is then made to produce a large pitch and yaw rate, which in turn gives rise to the propeller precession that drives the airplane through the maneuver. The various flavors of the maneuver are produced by subtle (which means I don’t know how to do it) differences in the amount and timing of the control inputs.

Gyroscopic moments from the propeller have one other effect that can be significant to the airplane designer. Propeller precession causes bending moments on the propeller shaft. If these loads are repeated often enough, they wear bearings and can lead to fatigue failures of the propeller-mounting flange and crankshaft. Some aerobatic airplanes have experienced prop-mount flange failures or cracking as a result of this.