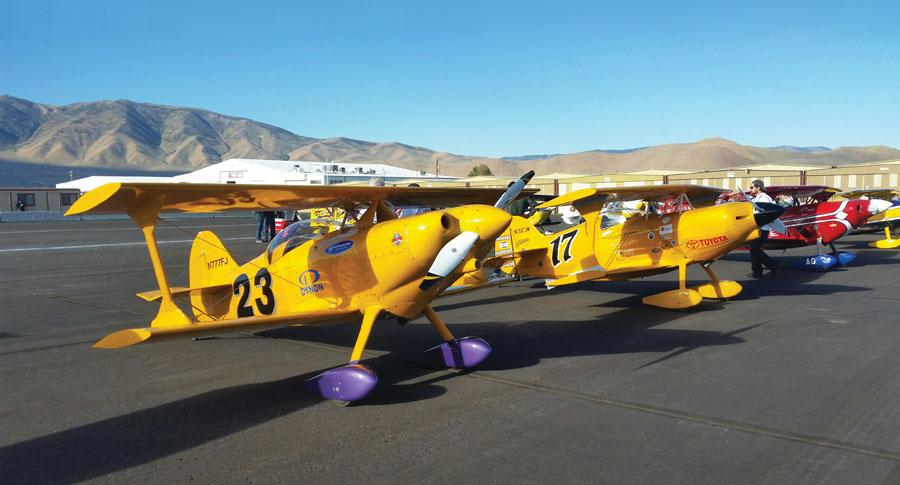 Number 23, Reno Rabbit, looked pert and ready to scoot on the Reno ramp. But under the smooth finish lay potentially deadly corrosion. With a lost, untraceable history, this plane was a perfect candidate for a deep-dive inspection, but who could have guessed?

It’s rare when crashing an airplane is a good thing, but for Jeff Rose it may very well have saved his life.

A dentist from Carmichael, California, with a chronic case of pylon racing fever, Jeff’s story began when he purchased Reno Rabbit, a Mong Sport biplane racer in 2012. Jeff was hoping the diminutive Mong would prove a more competitive platform compared to the larger Pitts Specials normally found in the Biplane Hangar at Reno. In fact, Jeff got started at Reno in a Pitts as well, attending Pylon Racing School (PRS) in 2012 and racing for the first time in 2013.

The little Mong certainly looked the part. Last raced in 2007 by Frank Jerant, it had been sold by Jerant to a prospective racer in Denver, Colorado, but that owner never did take it around the pylons. The plane was kept in a hangar and presented itself well with glossy yellow paint, good fabric, and nice workmanship. When Jeff bought it, Reno Rabbit was apart with the wings in cradles and the fuselage sitting on its gear. There was an engine mount but no engine. Partial disassembly is normal for race planes during the off-season and allowed Jeff a better than average look into the Mong’s construction.

However, other than what he could see and what Jerant could tell him during the time he had run the plane, Jeff really didn’t know much about his new racer. He still can’t say when it was built—Mong Sports have been around since 1953—and the ownership trail was not clear. People prior to Jerant’s tenure were not available to interview. 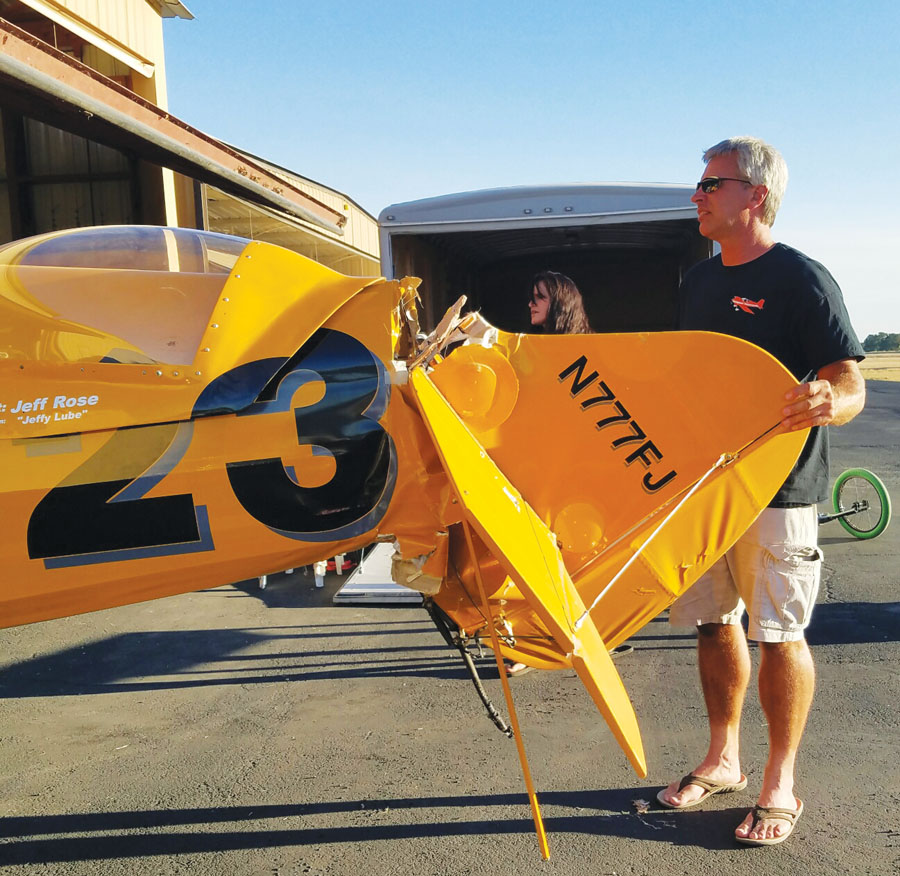 With all four longerons separated, only the Dacron fabric holds the tail group on Jeff Rose’s Mong Sport. The nice rag work and pretty paint had been hiding a completely corroded aft fuselage.

By 2014 Jeff had bought two O-360 Lycomings out of a crashed Beechcraft Dutchess and put the right-hand turning engine on the Mong. He also built a new, streamlined nose bowl; performed a few other, more minor aerodynamic clean ups; and took it to Reno. His qualifying speed of 205 mph equaled the speed of comparable biplanes with hot Ly-Con built engines, so he was pleased with his aero package as his stock Dutchess engine certainly wasn’t outpowering the Ly-Con mills. Jeff put that speed to good use, finishing third in the Biplane Gold.

With the airframe performing well, Jeff turned his attention to the engine for 2015. A set of 10:1 pistons was installed, and Jeff was again pleased as the new combination proved a couple seconds faster than the year before. With the race organizers fiddling with the computations used to calculate lap speeds, Jeff’s 2-second faster laps computed to 218 mph, and he again finished third in the Biplane Gold.

For 2016 Red Hamilton stepped in to help. The Dutchess’ other engine—the left turning unit—was massaged for race duty and bolted onto Reno Rabbit. Obviously, it was reconfigured for right-hand rotation via a new oil pump, appropriate accessory case, and right-turning camshaft. Jeff notes many people claim a left-turning engine won’t successfully convert to right-hand rotation because oil passage angles and such are different, but he disagrees as his converted engine ran well. 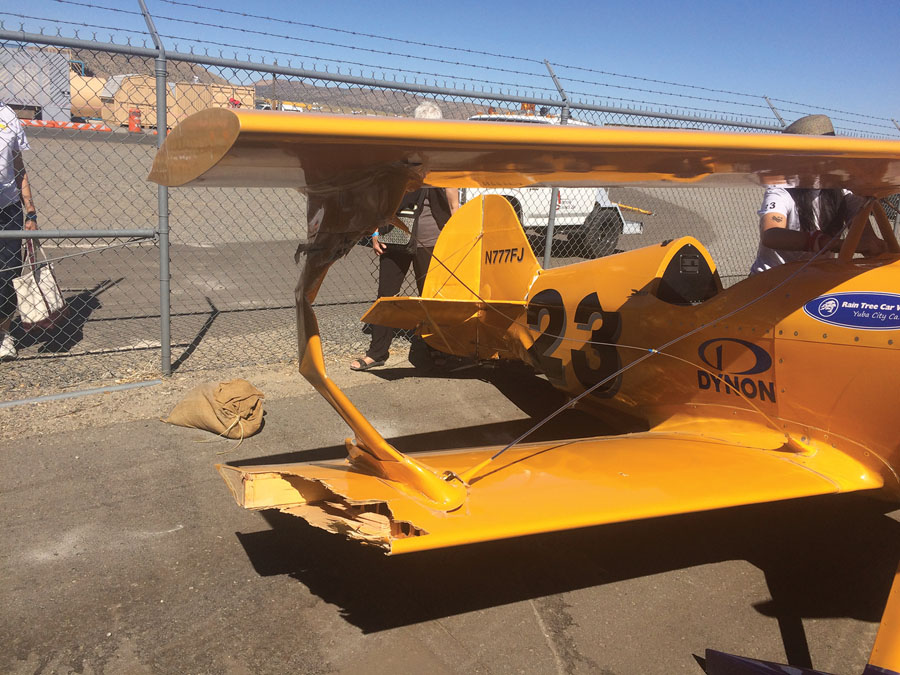 This was the only visible post-crash damage to the wings, but after the stress they had been under, “no one was going to race on those wings,” said Jeff Rose. As Jeff pointed out, at least the wood wings were fairly easy to modestly evaluate pre-purchase simply by “sounding” them with a few raps and from what could be seen via inspection panels; but not so the fuselage structure.

At the races the Mong flew faster than ever at 221 mph, and Jeff was understandably pleased. Curiously, and what in retrospect seems eerily prescient, Jeff’s crew began to get bad vibes about how fast Reno Rabbit was flying. “It was a weird feeling that it’s going fast enough,” is how Jeff explained his crew’s misgivings. The sensation even extended to Reno Rabbit’s previous owner. “Three times Frank came to me, but was interrupted…he was very nervous about how fast we were going. Everyone was worried except me.”

Some of this may have been triggered by a technical malfeasance in qualifying when Reno Rabbit started trailing smoke. An Allen-head threaded plug had come loose on the cold air intake, allowing oil into the cylinders and causing a smoke cloud of such proportions the fire trucks were summoned upon Jeff’s landing. Replacing the Allen plug with a square-headed version stopped the leak and allowed safety wiring the plug, so it couldn’t happen again. 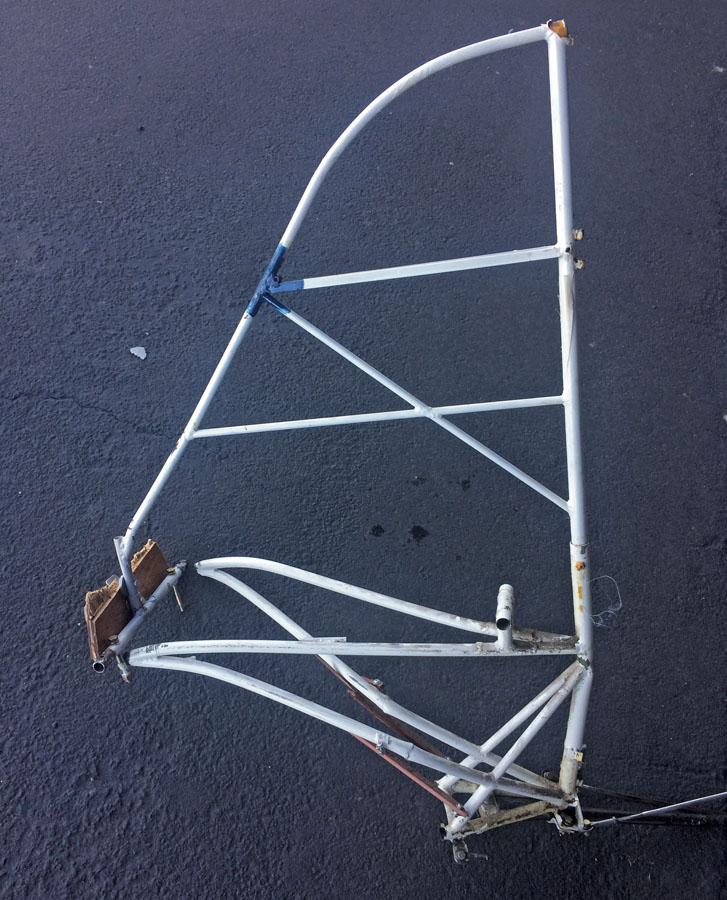 Stripped of fabric, Reno Rabbit’s vertical stabilizer and what’s left of the fuselage show the longeron’s failure points. The rudder post also snapped under hand pressure; this was one wasted weldment.

Misgivings or not, Reno Rabbit ran grandly, winning all three of its heat races and ultimately the Biplane Gold. It’s tough to do better than that! But the glory was fleeting, as on the landing rollout from the Gold race, Jeff slammed into Eric Zine’s Pitts.

The accident is on YouTube if you want to chase it down, but as Jeff explains, like most landing stories, it began well out in the pattern. “Someone got in front of me on the cooldown. I went high, my friend Eric pulled tight and turned base before me. He called his left base, and I was, ‘What? How did he end up in front of me?'” With an emphasis on recovering races as quickly as possible to keep the schedule moving, Jeff continued his landing, albeit feeling the proximity of his fellow racers. 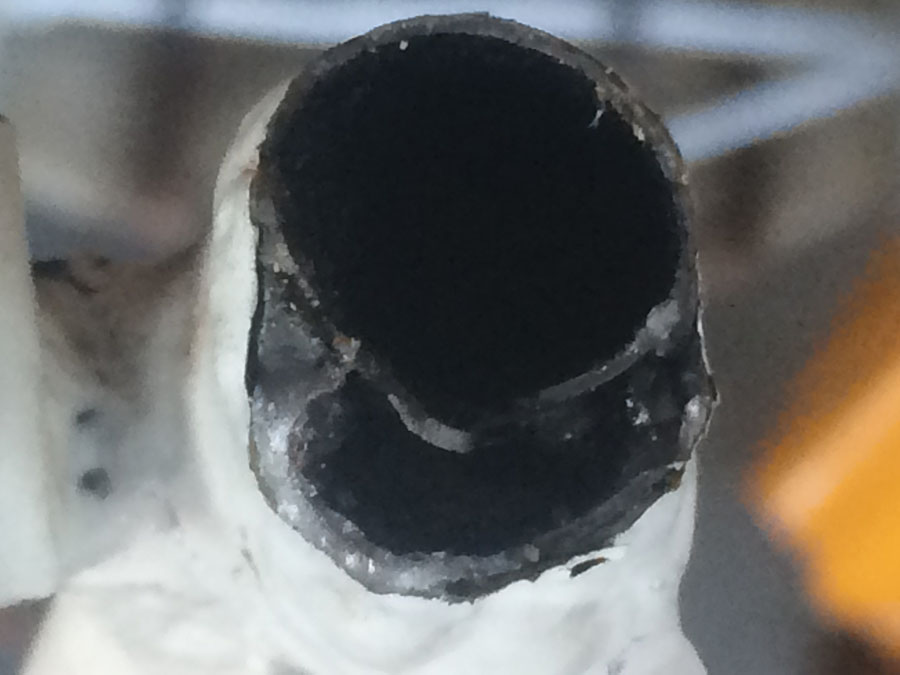 A bit fuzzy for sure, but this photo of a failed corroded section shows a near total lack of bright metal at the failure point. All four longerons had the same look.

Compounding the situation, Jeff says there’s “no way” to wheel land the Mong and is thus blind down the runway from the moment he rounds out until he turns onto the taxiway. Jeff had touched down and was long into his rollout when he overran Eric. Reno Rabbit was on the runway centerline and Eric to the right, so just Jeff’s right lower wing did the impacting. Reno Rabbit was spun aggressively to the right and began rolling backwards at about 45 degrees to the runway centerline.

Now, if you’ve ever been to Reno Stead where the races are held, you’ll agree it’s a big-airplane airport. The runways are long, runoff areas, taxiways, and ramp generously large, and in general it has the feel of the ex-military base it is. Part of this is because the expansion joints in the pavement are best suited to larger diameter tires, and when Reno Rabbit’s diminutive Sonex tailwheel found the intersection of two runway joints, it was like sticking a pole vault pole into its socket. 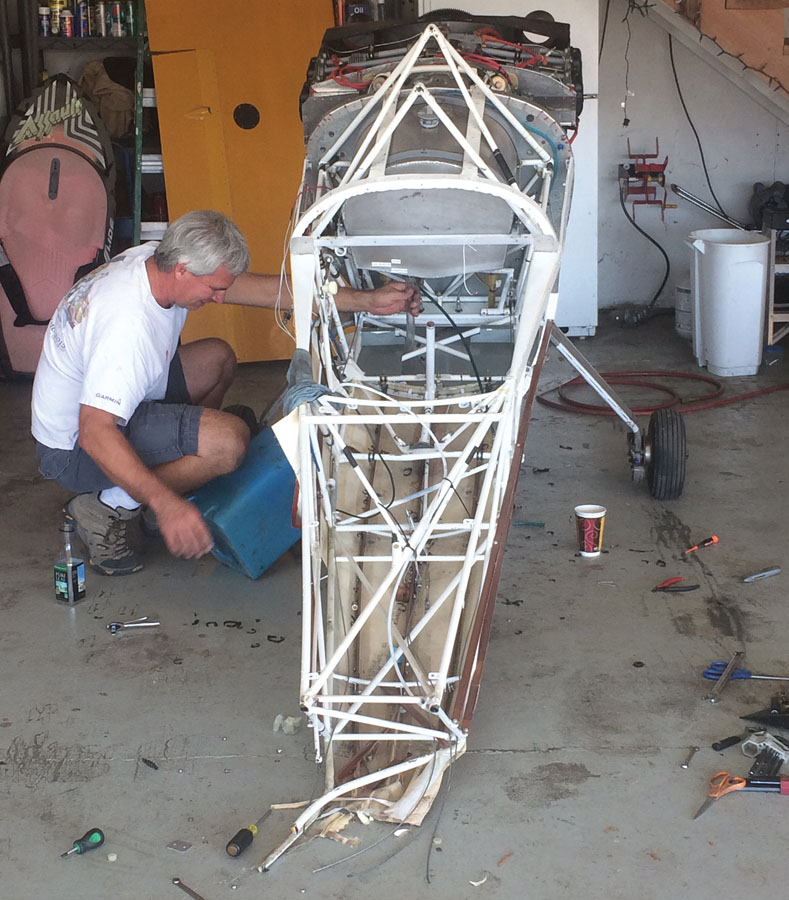 By the time the wings were rejected and the fuselage stripped for inspection, there was nothing economically repairable to Reno Rabbit. There was bent tubing all the way to the firewall, including the cabanes.

Jeff’s Dynon electronic suite recorded a 14 G deceleration as Reno Rabbit plugged itself into the pavement. Something had to give, and while you’d expect the rod-like tailwheel “spring”—it’s more like a boom—to snap, it didn’t. It was the fuselage that absorbed the load.

It was no surprise to find bent tubes in the fuselage weldment all the way up to the firewall, but when all four longerons completely failed just in front of the horizontal stabilizer, everyone was amazed. “I separated the fuselage with a pair of scissors,” is how Jeff described his post-accident teardown. Only the fabric and control linkages to the tail group were left holding the airplane together. 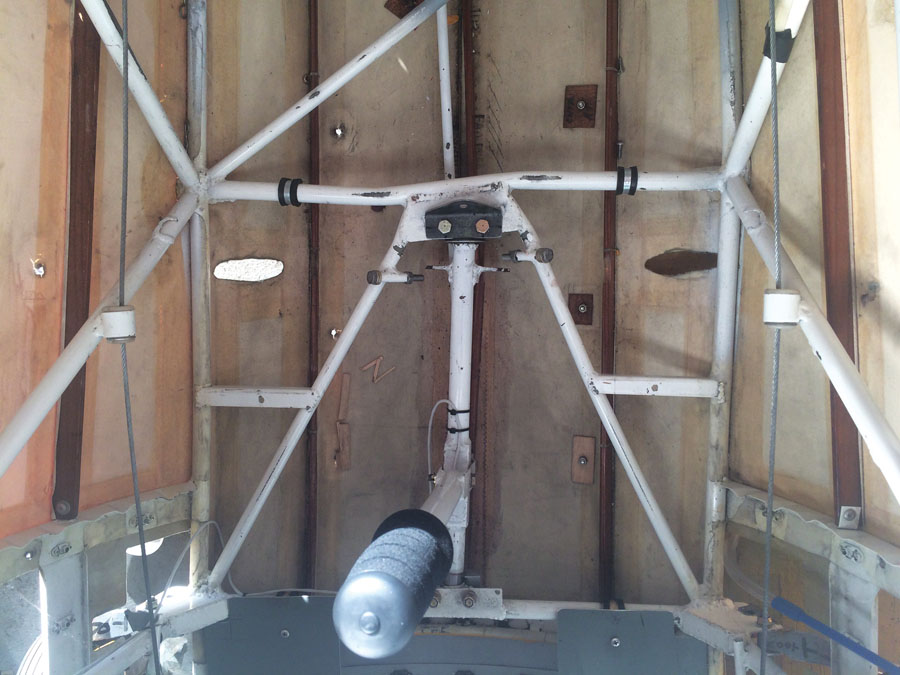 At least the rest of the fuselage forward of the tail group had enough integrity to transfer impact loads all the way to the firewall. Here the S-curve deformation under the pilot’s seat is obvious.

How did the Mong’s tail group fail so spectacularly? Corrosion. The more Jeff looked, the more rot he found in the back of the fuselage and tail group. “I also stressed the rudder post by hand. I just pulled on it for the heck of it, just before tossing the assembly in the dumpster. It snapped like kindling.”

How many more G’s could Jeff have pulled around the pylons before Reno Rabbit’s tail group would have simply fallen off? How old was the fuselage weldment? Where did it come from? Where had it been? Did it sit around in some wet barn for years? We’ll never know.

To say Jeff was dumbfounded to learn—in rather spectacular fashion—that his airplane was literally ready to crumble apart is an understatement. “It looked great. The fabric was great and the paint shiny and glossy; no one would have guessed the fuselage was so corroded.”

“The guy I bought it from only had it a couple of years, and it lived in a very nice hangar in an airport community,” said Jeff, still searching for answers.

So, what is the takeaway from all this?

“Just beware. If you’re picking up an old project, be careful. Be able to validate the project. If you can’t validate it, then what is it? Are you willing to take that risk?”

Another lesson was the importance of a headrest and back support. Jeff had no head support above his shoulder line when he took that 14 G hit going backwards. His head hit the turtle deck for sure, and he was plenty sore afterwards. This would be just as important in a frontal accident, when the upper body rebounds backwards after the initial slam forward.

As an epilogue, much good came out of Jeff’s accident besides preventing his tail from falling off in flight. For starters, no one was injured. There was no prop strike, so the noisy parts were salvageable. Plus, Jeff and friend Eric Scheppers repaired Eric Zine’s Pitts at Jeff’s expense, “and now we’re better friends than before.” With a new canopy and wing, the Pitts is 2.5 seconds faster.

“And we found some structural things on Eric’s plane, too,” said Jeff. “The landing gear tubing was not all to the cluster,” so that was fixed as well.

Finally, Jeff found the accident brought out the altruism in the pits. “Part of the reason why I’m here is because of the amazing friends who pick you back up.” Josh Phillipson, an F1 racer, called Jeff after the Mong was totaled, “and the first thing he said was, ‘What do you want to build?'” And he was ready to help buid it. “A friend from Dynon—Lawrence Doan—is an aeronautical engineer, and he was ready to help. Craig Catto is a friend, and he sat down with me and said, ‘How are your project’s molds? Bring me the files, and I’ll cut the molds for you.'”

And the project Catto was referring to? It’s Jeff’s new design, a one-off racer for the Biplane class. “It won’t catch Phantom [the all conquering super-modified Mong Sport of Tom Aberle and Andrew Buehler] due to budget, but we will definitely be much faster than we are now!”