It’s more cliché than observation to note there’s a whole lot of dreaming going on in aviation. Let’s admit it, this is how most of us weaseled our way into sitting in our first cockpit. Hopefully this was done sufficiently early that we didn’t look too silly stirring the controls while affecting Steve Canyon’s clinched jaw, although I think most of us were so thrilled our first time we only hoped no one was looking or simply didn’t care.

Of course, you guys that made buzzing sounds with your lips or went “Rat-a-tat-tat-tat-tat” were either 12, or older and beyond hope. And yeah, saying “Guns, guns, guns” when you were 43 was no better.

And just like the natural crustiness that comes with age, with some time in our logbooks our av-dreams lose their initial romantic gauziness and take on more defined form. Just as typically, we seem to dream about those things we don’t have, can’t have or, at best, think we might have someday. And because we share so many of our winged realities—pancake breakfasts, mastering the ILS, holding two throttles in our right fist or tailwheels in the grass—there lays a collection of shared, dare we say common, unfulfilled aviation fantasies. To wit:

Barnstorming: This is an ancient relic now that kids have been flying PlayStation 747s under the Golden Gate Bridge for 30 years. Airplanes are old hat no matter where you take your virtual Jenny, so you have to be beyond redemption at this point to think baling wiring a Hatz together and setting off for distant pastures is still possible without incurring a lawsuit over all the psychic damage caused the cows. They are individuals, after all.

Fly Your Own Airplane to AirVenture: Assuredly, this is a socially acceptable fantasy, sufficiently mainstream it’s been official EAA dogma for decades. And depending on one’s geography or gumption, well within the grasp of many of us, but not universally so. For one thing, the U.S. is a large country and if you’re in one of the corners with a Breezy, the Kettle Moraine might as well be the moon. Yes, people have flown powered parachutes to AirVenture while others have leapt the Caribbean from South America in homebuilts to prove the point. Heck, we’ve covered those who flew single-seat skeeters from England. But these are rare individuals, and while the accomplishments are admirable and their courage the right stuff, it’s only rational to admit time, budget, distance and building ability mean this high pleasure is not likely mine or many others in this lifetime. This is a good dream to get an early start on.

Taj Mahal Hangar: Another near-universal dream observed mainly in the obverse. These days some version of Bauhaus nirvana seems the rage: an inhumanly large, antiseptic white box with recessed lighting, epoxied floor, designer furniture in the corner and a perfect little airplane somewhat lost in the middle. In reality the entropic dysentery infesting the average hangar means most of us are lucky to guide the bird in and out without hitting its tail on a 23-year-old Exercycle with 12 miles on its odometer. You’ve been saying you were going to clean out the hangar for how many years and still haven’t done it. That’s because the second law of thermodynamics won’t allow it with enough energy conserved to fly.

Living at the Airport: Perhaps this is a variation on the Taj Mahal syndrome, but in any case who among us hasn’t thought of sleeping in the loft with the Harmon Rocket in ready view below? Or sitting on the porch while watching all that winged coming and going? You could work on airplanes at any hour and for all hours, with no commute and little need to go among the English outside the airpark gate. This is great until the reality of sticking close to the in-laws who need your help mowing their lawn pricks that balloon.

The Affordable Flyer: Now here’s a unicorn, the cheap flying machine. Sure, there are minimalist gas sippers and those less expensive to build out of two sheets of plywood and a stolen whirly gig. They also don’t go anywhere, can’t carry anything and have the crashworthiness of a Dixie cup. But as soon as you get into “real” airplanes—let’s say birds able to carry two people 100 miles distant before sunset—the prospect of an airplane so inexpensive to build and operate your budget won’t know it’s there looks more like an oddly horned horse. But that never stops us from calculating fuel burns and build hours contemplating what 100,000 pilots before us have failed to find.

Flying a Fighter: Major Walter Mitty reporting for duty! This really doesn’t matter if your vision is afterburners or something with big pistons and a 13-foot propeller. Unless Uncle Sugar paid you to drive these chariots, your realistic chance of wrapping your hands around any of these sticks is vanishingly slim. There are precious few opportunities to summon the thunder in any of the current crop of war machines; even journalist rides seem pretty much down to VIP sorties with the jet demo teams, and those go to the News-at-5 blonde. With enough cash, piloting a P-51 is easy enough thanks to businesses such as Stallion 51, but let’s get real. It would take serious sacrifice for most of us to wangle that V-12 ride, and that money competes with everything else in your life. You either need drug dealer blow cash or a serious hunger for these rides. And it’s far worse if you’ve got a round motor in mind. You could buy a Reno Unlimited for relatively cheap these days…

The Dream Shop: You didn’t think we were going to get out of this without recounting chrome plated CNC mills on shag carpet, did you? Of course we dream of tools and the shed we keep them in. If only it could be a slightly larger shed with more tools. Yes there are engineering temples, but the absolute truth is any shop that actually has work done in it has a hard-earned earthiness that is both its authenticating characteristic and impossible to expunge no matter how obsessive the owner. At the very pinnacle of motorsports—Mercedes reportedly spent $484 million on two Formula One cars last year, and the obscenity of it all has engendered a $175 million budget cap per two-car team for 2021—the shops truly outpace the imagination and bear more resemblance to art galleries than anything else. But from there they immediately descend into mere NASA clean rooms or surgical suites. Dream all you want, but unless you have one shop to show your friends and another where the work takes place (seen that done), then the dog should feel secure on its cedar bed under the bench.

She’ll Like Flying: Dream on, brother. If she doesn’t like it already, it’s not going to change. 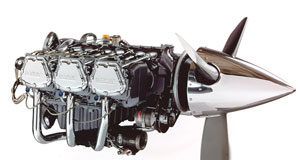 Kitplanes - June 13, 2009
0
Lycoming offers zero-time, factory-rebuilt engines to pilots and owners for the cost of a factory overhaul, in exchange for a first-run core; RPX Technologies introduces the simple and straightforward DynaVibe prop and rotor balancer. Edited by Mary Bernard.

Bob Grimstead - April 17, 2009
0
Light and slow, yet lacking control skittishness, the X-Air is a simple and fun way to go nowhere in particular. By Bob Grimstead.