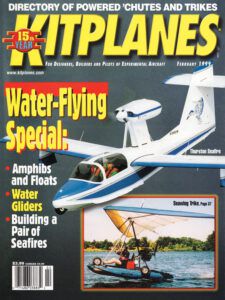 Our February 1999 issue teased a summer’s worth of aeronautical splash-n-dash with a “Water-Flying Special.” In it, we covered amphibious aircraft and floatplanes as well as “water gliders,” which look like the product of an amorous kayak and a willing hang glider. (How do you explain that to the parents?)

The Seafire amphibian on the cover was the subject of a lengthy feature by Ron Wanttaja, who described how two builders undertook their Seafire projects in parallel. The Seafire was Dave Thurston’s exploration of a hull amphibian with a tractor, pylon-mounted engine. (His other notable design evolved into the Lake amphibian, which has a pusher configuration.)

Elsewhere in the issue, we had a survey story on all the amphibious or float-equipped kits for sale at the time. Names included the Aventura, the Vollmer Sportsman, the Osprey 2, the Seawind and the Italian Sky Arrow. We also explored the Zenith CH 701 on floats and provided a listing of some 19 companies offering amphib kits or floats to be fitted to popular utility designs.

Speaking of light, we were very much involved in the superlight end of the market in 1999 and featured seven full pages of trikes and powered parachutes for sale. Many of the full kits were near or slightly less than $10,000.

In his Around the Patch column, editor Dave Martin praised the AOPA show of 1998, which was held in Palm Springs, California. Although primarily a certified-GA event, there was still interest in homebuilts among the members and showgoers, and Dave reported that his seminar was well received. (Our current editor in chief was there, working for AOPA at the time, and recalls sitting in on that seminar.)

Finally, this magazine contained one of our multipart features looking back at our earlier issues as part of our ongoing 15th anniversary celebration. (The fact that this very column does the same is not lost on us.) Contributor Don Downie looked through the 1994 and 1995 issues for gems and found our review of the BD-10 jet and Dave Martin’s flight report on the tandem-seat Omega II, which debuted to high hopes but faltered after 13 kits were sold. We reported that all got their money back for the kits.

Mary Bernard - November 16, 2012
0
The free flight of birds inspired the first forays into manned flight—a perfect example of the concept of biomimicry. Editor in Chief Mary Bernard sees a similar resourcefulness in plansbuilders who look at a set of drawings and create an airplane from scratch.

Builder Liability and You

Dave Higdon - June 24, 2007
0
There are ways to protect yourself from lawsuits when you sell a homebuilt aircraft. These include accurate and complete documentation of the building process, adherence to manufacturers instructions during the build, a good record of safe flight over a period of time, third party liability insurance protection and a signed liability waiver.

Mike Newell - March 20, 2014
0
First flight surprise! There's a reason you should follow the plans when installing a canopy latch. By Mike Newell.