Eastern Washington in February isn’t often the first place you think could spark another of my many wants. It’s not as rainy or dramatic in Yakima as it is in Seattle or Arlington, and the topography isn’t quite as compelling in a look-at-those-trees-Diane way as it is further west. Summers are hot. Oh, and haute cuisine? Mmmm, I don’t think so.

And yet, there I was, the first Friday in February, having a riotously good time. Part was the airplane, of course; you can read the report on the CubCrafters Carbon Cub EX on Page 8. Some of it was the company I kept: CC’s general manager Randy Lervold, a multiple offender in the homebuilt world, and I share the same worldview. Over a fine salmon dinner Thursday, Lervold, CubCrafter’s owner Jim Richmond and kit-overseer Mitch Travis and I fixed all the ills in general aviation. You’ll be getting the white paper soon, I’m sure. And while I realize it was Lervold’s job to present the airplane and the company in the best possible light, my BS detector never got above, say, a 1 or 2. (Yes, it goes up to 11.)

But probably the most enjoyable part of the trip were the two stops we made at the grass strip in the nearby town of Buena, Washington. Inexplicably pronounced boo-wayna by some of the locals, Buena is one of those immaculate turf strips, bounded by the Yakima Valley Highway on the northeast and an orchard on the southwest, that makes you want to chuck it all, drive an RV up to the property line, and watch. It was quiet on a Thursday afternoon and the following Friday morning, despite the sun making an appearance after a day of lowish overcast and the threat of rain. We made it less quiet, performing maximum-effort takeoffs, and even trying the Baumann-equipped amphib model for the first time on grass. 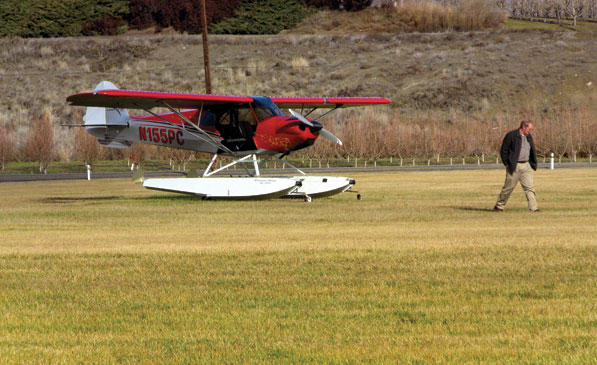 CubCrafters’ Jim Richmond steps away from the Carbon Cub SS on Baumann amphibs after a landing at Buena.

Buena is 2600 feet long and 120 feet wide, according to AirNav.com, but it feels like 10,000 feet for as little of the length is needed by the Carbon Cub. With a reasonable amount of crown, it apparently sheds rain quickly and dries firm. Trees bracket the approach to Runway 28, but the far end is clear; or it seemed to be. Every takeoff in the Carbon Cub had us at pattern altitude before reaching far beyond the end of the strip. (My BS meter blipped when Lervold said the airplane could do it, but he was proved an honest man.)

Grass is popular for demonstrating Cub-like aircraft to visiting journalists because, well, as a company pilot you never know if you’ll get a good stick or a guy with two left feet—or worse, no feet at all, figuratively speaking. A bit of sideways drift won’t jink the airplane at touchdown, and with trees and farm equipment relatively close, the visual perspective seems right.

What else seems right is the context. Tube-and-fabric taildraggers just feel at home here, playing on the grass, making tight turns off the runway so the following airplanes can get down and stopped. No control tower, no instrument approach—though Buena does have lights—and almost no pressure. Well, I do have Richmond’s comments on video I shot of Lervold landing: “A little fast,” he said about an approach that actually looked a little slow to me. Again, there’s that perspective thing.

I suppose it’s living in Southern California and being based at a busy, two-asphalt-runway, towered airport that makes me pine for a home like Buena. Back in 1998, I oversaw a restoration project for AOPA and purposely chose a shop, Clarksburg Air Repair, based on a small grass strip. I loved flying in there. My old Bonanza was perfectly at home on the turf; the SOCATA Trinidad TC that I brought in there, once, was not.

And then there was the time, circa 1994 or so, when I visited Van’s Aircraft at the old facility at North Plains. The grass strip ended at the back (front?) door to the shop, and wild berries grew along a fence line just to the north. I vividly remember standing around, waiting for the afternoon light to turn, invited by Dick VanGrunsven to grab a handful of berries for a snack as we watched a small herd of RVs coming and going.

Realism intrudes. I understand that I don’t have to get out there and mow the strip, or work the roller, or worry about the liability of newbies misjudging the approach and ending up in the orchard. Still if I ever get the chance to base at a place like Buena, I might just jump.

Our two-part Engine Buyer’s Guide got its share of comments. Among them, this letter: “Really, why bother if you’re going to render it almost unreadable by using such horrific color schemes for the charts/graph? Whose brilliant idea was that? I normally find this a useful feature as with your other comparative articles, but I won’t bother saving this one. I’ve been a subscriber since the original issue but lately have been rethinking that decision to renew automatically.”

OK, then. I agree that our first attempt with the colors and the fine type didn’t work, which is why we improved it for the second installment in the April issue. We’re looking at new ways to present data, and it was our belief that providing the information in tables would make it easier to compare engines. Perhaps we need to bind a magnifying glass into the next issue?

While still on engines… We received a note from Sonex/AeroConversions regarding the price of the AeroVee 2.1. According to Mark Schaible, the base price for the 2.1 is $6495; we had it as $6799. Also, he says, while we characterized it as being carbureted, “Carb is fine, but it would be more accurate to say throttle body injector.” Sure, TBI it is. Finally, we should point out that the AeroVee is “100% air cooled,” with a dry weight of 161 pounds. There is a Nikasil cylinder upgrade, $500, that shaves 10 pounds off the engine.

In other engine notes, we didn’t include the UL Power engines in either guide this year because we couldn’t get an answer from the company for the 2009 version. When that happens, we assume the design has gone underground or the importer has given up. Turns out neither is correct. I received a call from Gus Warren, who is handling the import of the UL Power engines to the U.S. He has one flying in a Zenith, and says that engines are readily available from the manufacturer in Belgium. Because this is such an enticing engine, perhaps a true competitor to the Rotax 912, I have dispatched our engine man, Steve Ells, to look more closely at the UL Power. Look for his report in next month’s “Engine Beat.”

Marc Cook has been in aviation journalism for 22 years and in magazine work for more than 25. He is a 4200-hour instrument-rated, multi-engine pilot with experience in nearly 150 types. He’s completed two kit aircraft, an Aero Designs Pulsar XP and a Glastar Sportsman 2+2.