Sometimes from this seat you hand out assignments that you later wish you had saved for yourself—like flying the Belite. As you’ll see from Ed Wischmeyer’s review, beginning on Page 8, the Belite is a distant cousin of the Kitfox Lite, developed by James Wiebe in Wichita, Kansas. It can be built as a true FAR Part 103 ultralight, or as a heavier Experimental/Amateur-Built model. Because of its simplicity and low kit cost, allied to relatively cheap engines, it’s an airplane you could have flying for less than the cost of a new Camry. 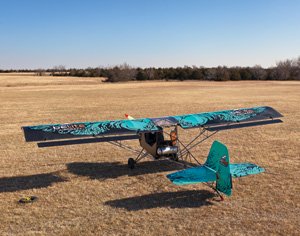 The Belite has a purpose. Two, actually. One is to advance the state of the art in ultralight handling qualities. Now, I’m no expert, but the few ultralights I’ve flown have left me with varying degrees of bewilderment—as in, I know these are airplanes, but they sure don’t handle like anything in my experience, which includes several lightweight models along with the usual suspects from the certified crowd. From what Ed says, the Belite’s handling goes a long way toward bridging the gap from ultralights to “real” airplanes. (Oh, and you’re going to continue to see us put that term in quotes, because the implication from a lot of curb sitters and hangar experts is that ultralights aren’t “real” airplanes. Lawn chairs with go-kart motors, maybe, but not real airplanes. Nonsense.) This success should not go unheralded because of the unique challenges presented by the Part 103 regulations, particularly in keeping weight down.

The Belite’s second purpose is to remind us about the pure joy of flying. I confess that paying close attention to an industry that is, in places, struggling for survival, all the while trying to reconcile my own use of an airplane for need-to-make-schedule travel, sometimes skews my perspective. Spending too much time under the hood, and not enough polishing the fenders. In that sense, it’s easy to forget the surge of excitement you felt the first time that Cub (or Cessna 150) left the Earth under your control.

In many ways, James Wiebe and his crew embody the seemingly lost spirit of the ultralight movement before the messy expos in the 1980s. Check out his blog site (http://jameswiebe.blogspot.com), and you’ll see what I mean. Where many companies keep development hidden in a dark part of the hangar, here you can see photos of the a test article to prove the strength of a carbon-fiber, cantilever wing for the Belite. Wiebe and Zenith are probably leaders in the art of social and builder networking—sometimes this is the best, most modern way to get your “fix.”

It’s my view that as our industry works to rebuild its economic base and even think about future growth, the nature of the kitbuilt market will continue to shift. When I ask kit manufacturers how they’re doing, I hear more good news from those selling low-cost, no-frills models than from those peddling high-end aircraft. Which leads to the predictable question: Who will be the first to rebound? The low-end guys or the top spenders? Personally, I’m not banking on the million-dollar turboprop segment to rebound first, but I’ve been wrong before.

At practically the last second, we learned that Superior Air Parts was actively gearing up to produce complete engines for the homebuilt market. This information arrived too late to make it into the Engine Buyer’s Guide in this issue. (In fact, that sound you hear is our production manager tapping her foot, waiting for this column to arrive.) Our most recent information had restart of production on the horizon but not exactly imminent.

According to Tim Archer, former Superior CEO and now the head of the Chinese-owned parent company of Superior, “We’re on track to have all the parts for the XP-360 series available in February, and intend to have it back in production soon after.” One can predict an announcement at Sun ‘n Fun that the XP-360 is again available. How, exactly, it’ll be sold remains to be determined. “We’re working on that,” says Archer. “And we expect the XP-320 to follow soon after the 360. Then we’ll work on reestablishing our production certificate for the Vantage. Development of the XP-400 is also planned.”

Under the Thielert banner, Superior had consolidated its suppliers until it had but one source of cylinder castings and other big items. “We have reopened the lines with the factory [formerly under Thielert] but will establish a second supply line as well.”

While prices haven’t been set, Archer says the XP engines will be competitive with similar powerplants, as they had been before. A restart of the customer build center at the firm’s Coppell, Texas, U.S. base is also in the works. Archer is quick to point out that the company’s revival will continue to be careful, gradual and sustainable.

I’d like to introduce Roy Beisswenger, who will be restarting our “Light Stuff” column as the device it was originally meant to be: a portal to the world of lightweight, comparatively low-cost flying. When the LSA movement was beginning to take shape, we decided to shift the column’s focus to factory-built LSAs, thinking that the industry would grow and flourish as promised. We hoped that our readers would gain familiarity with designs that might well be converted into ELSA kits.

The LSA movement is, at least for now, at a low idle, heat turned way down, and the likelihood of the popular SLSAs becoming super-quickbuild kits will have to wait for better economic times. This condition coincided with former KITPLANES editor Dave Martin’s desire to spend more time flying and working on his Van’s RV-12, and so we put the department on hiatus. Until now.

“Light Stuff” returns to its roots, and to the roots of this magazine. Roy’s first installment, on Page 70, provides an overview of the segment. He’s what you might call well-informed—as the technical editor of Powered Sport Flying should be. How we came together is an example of opportunities presenting themselves. I was giving a talk at the Wicks Aircraft Supply open house last fall, and Roy was also a speaker. His clear, concise and entertaining overview of the category caused the 15w compact florescent over my head to illuminate briefly. I knew we had our guy.

I look forward to Roy’s efforts in covering this important part of the market, while the rest of the magazine continues to concentrate on the issues builders find important: what to buy, how to best complete a project, and what to keep top of mind to improve safety and utility.

Marc Cook has been in aviation journalism for 22 years and in magazine work for more than 25. He is a 4400-hour instrument-rated, multi-engine pilot with experience in nearly 150 types. He’s completed two kit aircraft, an Aero Designs Pulsar XP and a Glastar Sportsman 2+2.

Tom Wilson - May 3, 2021
0
There are some things to learn in aviation that seemingly only come with experience.

Mel Asberry - September 14, 2010
0
DAR Mel Asberry clears up airspace restrictions for homebuilts during flight testing and discusses how the original builder of a homebuilt design remains the builder unless the airworthiness certificate is surrendered, which has implications for reselling an aircraft.