“With great power comes great responsibility.” I’ve heard that quote fairly often in the past few years—from a comic book hero, isn’t it? It’s hard to put a lot of stock in advice from imaginary heroes who dress up like spiders, but in this case, it isn’t that far off base. In fact, I got to thinking about the training and learning that we, as pilots, have to go through to come to terms with modern cockpits, and a slight variation on the phrase leapt to mind. How about, “With great capability comes a great responsibility—to learn.” Glass cockpits do add incredible capability to modern Experimental aircraft: They give us more information in a more usable form, with greater reliability, than anything we have seen before. But because of the presentation and amount of new material, the pilot being introduced to such a system often feels like he is drinking from the proverbial fire hose and may never really learn how to use all of the features to their best advantage. Unfortunately, as with a superhero’s powers, great evil can result if those powers are used improperly, and in the case of Experimental aircraft, that great evil can result in significant destruction—or even death. 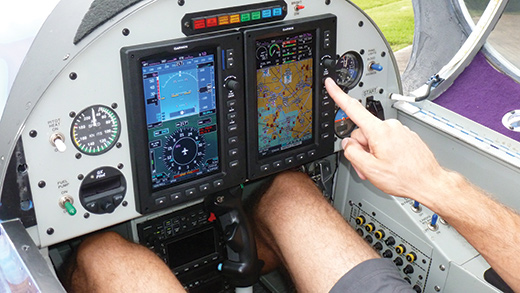 Practicing with your new EFIS on the ground is essential to flying with it safely. You can make all the mistakes you want when you aren’t moving at a rapid pace through the air.

I have been involved with the development testing of new cockpit presentation systems for close to three decades. I have flown glass cockpits ranging from developmental prototypes to fully integrated advanced systems in all sorts of simulators and aircraft, making comments on features and procedures and how they are going to be used in the real world. This development work has sometimes been in the world of pure research, while other times it has been for manufacturers polishing a product for the homebuilt market. What I have found is that the fundamentals of data display are generally pretty “standardized” by now—a primary flight display (for instance) is going to have a horizon line (blue sky above, brown ground below), airspeed tapes on the left, altitude tapes on the right, etc. Moving maps show a magenta line to define the course, with a little airplane symbol to show you where you are. These basic “standards” grew out of the mechanical instruments being replaced. The place where systems diverge is in how various modes and features are selected, how the autopilot is controlled and how the pilot has to interface with all of the whiz-bang stuff that they have paid for. When you jump from airplane to airplane, it can truly get a bit overwhelming, as some manufacturers use knobs, others use buttons and still others use joysticks. There is little standardization in this regard—yet.

And so, when I watch a new pilot sit down for the first time in front of a new EFIS, I watch to see how they react. Some have a simple philosophy—get it powered up, understand what is on the screen—and don’t touch a thing. To be honest, this approach works pretty well if you are going to fly VFR. But if you plan to get into the clouds (or even just in “the system”), you are eventually going to need to make inputs to the panel, and this is where things get a bit frustrating. I have seen a lot of different reactions to various systems by many pilots, and what I have noticed is that there is a common thread in the learning process, and you might find that it parallels a well-defined psychological sequence. So without further ado, let’s talk about the five stages of EFIS education.

“Hey, if it has wings and I can get it started, I can fly it! What’s to learn? I saw a demo at Oshkosh of an early EFIS model, so what’s the big deal? How hard is it to understand? I can see the numbers for airspeed and altitude, and boy, that looks like a great big artificial horizon there—pretty easy to read. Now, how do I make a 2-minute turn? Well, there are a couple of little triangles off to the sides of the ‘straight up’ line—maybe if I bank it that far over? Hmm…I guess that is something that has to be tried.

“Hey, any idea where I find the manifold pressure? Oh, there it is…I think. And fuel quantities, I guess I see a 20 there—doesn’t this thing have two 20-gallon tanks? Maybe that’s one of them. The rpm reading looks like it will be on that dial-thingy. OK, let’s crank it up!”

“Who was the idiot who designed this thing, and what in the heck was he drinking when he did it? How can anyone deal with all of these blinking messages and colors? I’ve got a red flashing ALT in front of me, but I can see out the window that I am not going to crash—how stupid is that? Meanwhile, there is something labeled % with a two-digit number, and it seems to be linked to the throttle, but I can’t get it to 100: Which is defective, the airplane or the stupid system?

“Geez, who the heck builds stuff like this? If I ever get my hands on them…and why would I need all of this information anyway? I’m a good enough pilot that I don’t need to be told to check my altimeter setting. Anyone who’d even think of buying this has got to be brain dead.”

“Hey, I’ve got this airplane over here that I am trying to learn. Could you maybe give me a few tips on how to press the buttons in the right order to make it fly a GPS approach? I really don’t need all of that stuff, but since it’s installed, I suppose it would be fun to be able to show off to other people. I promise to read the manual when I get a chance, but I’m sure that if you show it to me once, I’ll remember it. It’s not quite as sophisticated as the Wild Weasels I flew in ‘Nam—probably something simple that I am just not seeing because I am looking for something more complex.

“How about if you fly to lunch with me and give me the quick once-over—just the highlights to jog my memory. It can’t be too hard if those pointy-headed guys with big glasses can do it. I’m sure glad I have some real flight instruments alongside so that I don’t have to depend on this stuff.” 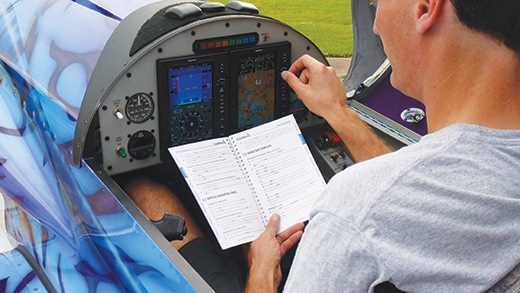 EFIS manufacturers go to great lengths to write and supply manuals for their equipment. You can learn a great deal from them if you practice while you read. Take the time you need to do this on the ground.

“Oh man, how much did I spend on this stuff? I am never going to figure it all out, and I’m not even sure it is working right. How am I going to explain this to the wife? I told her we’d be able to fly anywhere we want, anytime we want, but I can’t operate this thing in the clouds. I am just not getting it. I don’t know what the manual means by Flight Path Indicator or ARINC 429 channel. I can’t believe I took an extra year to build this thing and spent all that money.

“I just wanted something that I could go and fly, but I got so tempted by what everybody else was doing…now I am kicking myself. Maybe a hangar fire—yeah, that’s it; I’ve insured it for what I have into it. No, it’s in a T-hangar, and I couldn’t do that to all the other guys in the row. What have I gotten myself into?”

“OK, I admit it: I thought this was going to be so easy and that I knew everything there was to know in aviation. The truth is, I don’t. But I really think that if I can get some good instruction and keep my mind open, I can learn this. I accept the fact that none of this is natural. Flying well with a glass panel takes just as much learning as flying well with the old-fashioned stuff, but when I have learned it, I’ll be able to do so much more.

“You know, this could actually be fun. It’s been so long (how many years—or is it decades?) since I studied anything new in flying, I haven’t really taken the time to learn anything outside of what I already knew. How could I? First, I’d have had to admit that I didn’t know it all. Now where are those manuals? And isn’t that new fellow down the row an EAA flight advisor? Maybe he could help me learn this thing right—from the ground up.”

Electronic Flight Instrumentation Systems are far better than steam gauges for complex flight operations (especially single pilot IFR) because of the amount of preprocessing they can do for you with raw data. Instead of reading fuel remaining, groundspeed, fuel flow and distance to the destination, then computing to see if you can get there, the EFIS simply displays that you’ll have 12.5 gallons in the tanks upon arrival. That’s a lot of brainpower you can divert to looking at the big weather picture.

But this capability comes at the price of training. You can’t learn until you admit that there is something that you don’t know, and there is no shame in admitting that you simply don’t know a new system. No, it is not natural—but then neither is flying. Take the time before you fly to get some instruction if you are new to technically advanced aircraft. You’ll find that steps 1-5 will go much more quickly, and the money you invested in your new airplane’s avionics package will be well spent, instead of wasted.

Getting a Good Start