Question: Ive just finished all of the factory-recommended modifications to myZenith CH 601 XL and am ready to fly again. What is the procedure? DoI need to go back into Phase I flight testing? If so, does it have tobe the same 40 hours I did the first time? 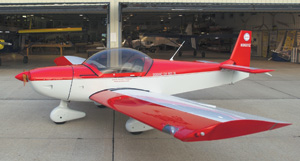 Upon completion of major modifications, any design needs to return to Phase I flight test, though the period depends on the changes and prudent flight testing.

Answer: Yes, you will need to return the aircraft to Phase I flight testing after a modification of this type. Everything is controlled by your Operating Limitations. Somewhere within your Operating Limitations should be a paragraph outlining how to do this. The paragraph will start out with After incorporating a major change as described in FAR Part 21.93…..This paragraphshould specify that you will need to contact your local FSDO for approval of your flight test area. They also should state that the minimum time for Phase I flight testing will be 5 hours, though the FSDO may require more time.

This modification will require thorough flight testing because you have modified the wing structure extensively. You should do a complete series of flight-test maneuvers including climb, glideand stall testing in all configurations with loadings up to gross weight. Id guess it would take at least 25 hours. After successfully completing this, you will use the same sign-off as after your original Phase I program.

Question: There’s some confusion about what needs to go on my data plate. Can you enlighten me? 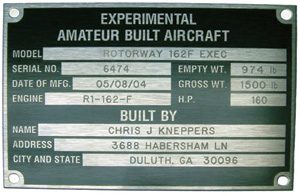 Federal Aviation Regulations Part 45.11 says that aircraft must be identified by a fireproof plate that has the information specified in paragraph 45.13 marked on it by etching, stamping, engraving or other approved method of fireproof marking. It must be secured so that it will not likely be defaced or removed during normal service, or lost or destroyed in an accident. The identification plate must be secured to the aircraft fuselage exterior so that it is legible to a person on the ground, and must be either adjacent to and aft of the rear-most entrance door or on the fuselage surface near the tail surfaces.

Note that it doesn’t say a person standing on the ground. It is OK for the plate to be installed on the bottom of the fuselage as seen on some Bonanzas.

Paragraph 45.13(a) details what information must be displayed on the data plate.

(4) Type certificate number, if any. This does not apply to us.

(5) Production certificate number, if any. This does not apply to us.

Note that every piece of information on the data plate must match the registration. If the builders name is listed as Jones John W,this is how it will appear.

Question: There are many partially built Experimental/Amateur-Built kits for sale. What is the legality of purchasing, completing and obtaining an Experimental/Amateur-Built airworthiness certificate for one of these aircraft? Lets assume that I have not done the majority of the building. If it is legal, what does one use as the builder’s record and/or accompanying photos?

Answer: The 51% rule-actually it is the "major portion" rule-refers to the major portion of the aircraft being amateur-built. Any number of persons may participate in the build process, as long as it is done for education or recreation, and not for profit. This explains why airplanes built by a group or, say, an EAA chapter are legal.

If you were to purchase a partially built aircraft project, you would need to obtain documentation showing the "amateur" status of the build from the seller. This would be in the form of a builders log that illustrates some kind of chronological order of the project. In general, what you are proposing-completing a kit aircraft that another amateur builder has already started-is perfectly legal and is not an uncommon situation.

No problem at all.

Ed Wischmeyer - July 6, 2010
0
If you’re looking for an economical way to get in the air and your stick-and-rudder skills are sharp, the Breese 2 may be the way to go. By Ed Wischmeyer.