As publishing moves ever forward and more of it becomes virtual-leveraging online resources to take on what might have been printed on paper just a few years ago-we continue to feel our way through the darkness and stumble upon unintended consequences.

Here’s an example: In the May issue we featured a reworked version of our Alternative Engine Buyer’s Guide. In years past, we have devoted several pages, myriad charts and graphs of information that can better be presented online. While fairly complete, that data represented just a black-and-white view of this part of our industry, and didn’t provide much in the way of context or commentary. For builders on the fence or for those completely unknowledgeable of engine alternatives, it just wasn’t very helpful.

So in May, I tried something different, tapping Patrick Panzera, editor of CONTACT! magazine, to provide an overview and a general lay of the land. The goal was to offer a broader approach in place of the dizzying specifics so that more readers would stop and take a look-instead of saying, "$&!#, another buyer’s guide!" and skipping ahead to Barnaby Wainfan’s column.

As part of the effort to consolidate the information, I decided to omit the specific guide pertaining to propeller speed reduction units (PSRUs); in part, this was a decision made because little of the data seemed to change from year to year. I wondered how active that part of the industry was and, as a result, how useful our reprinting of the specifications would be.

The unintended part is that we ended up leaving out successful companies with good product such as the Eric B. Robinson V-8 project, found at www.V8aircraft.com. Robinson sells a range of components for converting Chevrolet LS-series V-8 engines for aircraft use, including PSRU, firewall-forward kits, engine mounts and more. Packages are meant to be used with a range of LS engines, from the LS-1 (5.7 liters/346 cubic inches, nominally 350 horsepower) to the LS-7 (7 liters/428 cubic inches, 505 hp). While it’s tempting to call these modern-day Chevy small-block V-8s, in fact, these engines are truly advanced in materials and construction-it’s almost a coincidence that they have a single, central camshaft down in the vee and two pushrod-activated valves per cylinder, like the original Chevy V-8. The LS-7 has a forged crankshaft and main-bearing caps, titanium connecting rods and hypereutectic pistons-high-silicone-content aluminum slugs with lower coefficients of expansion than conventional-material pistons.

The Robinson V-8 conversion PSRU (left) and the LS-7 engine, a mighty beast from GM, which proves that there is amazing engineering in the automotive sector.

Robinson drives this engine "backward," with the flywheel behind the reduction drive, which itself uses a version of the Morse Hy-Vo chain drive (a multilink, plate-style chain used in automotive transmissions). Chain and belt drives have the advantage of being resistant, if not totally immune, to harmonic vibration. This appears to be a well-considered, nicely rendered conversion program. 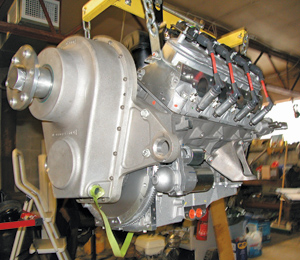 The Robinson V-8, ready for an airframe.

In any event, our decision to broaden the guide and omit a listing of PSRU manufacturers also allowed product like this to fall through the cracks, which was not the intention.

I have had some, shall we say, strenuous feedback on my counter-commentary regarding the decision to adopt alternative engines in that same Engine Buyer’s Guide article. A few readers and people in the industry took my comments as a blanket condemnation of the field, a recommendation to avoid alternative engines at all costs.

That’s not even remotely close. Very specifically, what I said was that if you believe selecting an auto-engine conversion for your homebuilt is going to result in a project as easily completed and instantly reliable as the known quantity (a Lycoming or a Continental or a Rotax or a Franklin, I don’t care), you will be disappointed. You don’t have a known quantity with only half a dozen installations.

I have heard from many, and personally know, a few builders who have gone down the alternative-engine path believing they were in for a plug-in replacement. String the wires, light the fires. One, who has suffered through PSRU problems, inconsistent support and a growing fear that his engine/prop package is simply not going to be reliable no matter how much time or money he throws at it, has decided to park his otherwise beautiful airplane and start over. He has no way to recoup his original investment without incurring significant liability.

Will this happen to you? I don’t know. Could it? Absolutely.

So here’s the bottom line, and let me see if I can say what I mean without implying that there aren’t any good FWF packages or suitable engines for conversion-because I don’t believe that flat statement to be true. Success with conversions will come down to a combination of the quality of the engineering that went into all of the pieces not made by GM or Subaru and your willingness to take the task seriously. You need to be patient, curious and up to problem solving on many levels. You will be challenged. Builders who have achieved success with this are unimaginably proud. They’ve earned it.

Marc Cook has been in aviation journalism for 23 years and in magazine work for more than 25. He is a 4400-hour instrument-rated, multi-engine pilot with experience in nearly 150 types. Hes completed two kit aircraft, an Aero Designs Pulsar XP and a Glastar Sportsman 2+2.