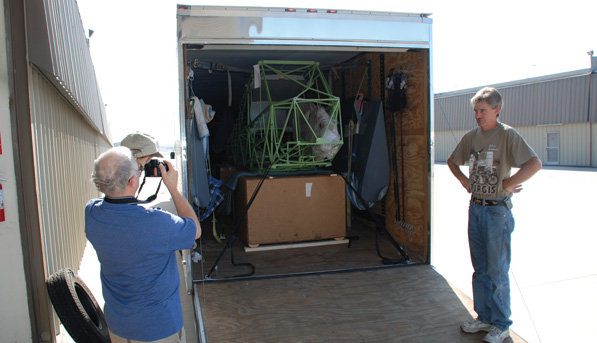 The arrival of the kit is well documented.

Is Christmas in September this year? No, but it seemed that way when the truck arrived with the kit—so many wonderful and strange new things to play with. We just kept climbing into the trailer and finding more neat stuff. But we had to hurry. The Cub kit made only half a load, so the necessities of moving full loads as often as possible, and the vagaries of weather and road conditions meant that trucks arrive when they get there, and you just need to deal with it as best you can. The day the truck arrived was a day my EAA chapter and I had set up to present Aviation Merit Badges to about 80 eager Boy Scouts. There was hardly time enough to unload the trailer let alone admire my new kit, but there would be time for that later. Today we just shoved everything in the hangar and got back to work.

The next Saturday could not get here soon enough. My building and flying buddy, Ed Zaleski, was even more excited than I was. I’ve known him since high school, and we’ve embarked on many a mechanical adventure—most of them successful and none of them boring. I am the flier who also likes to build, but he is the builder who also likes to fly. The door to the hangar slowly creaked open, but we were both inside long before it made it all the way up. The pre-welded fuselage awaited us in primer green, begging to have parts attached to it. We were more than ready, but there was work to do first. 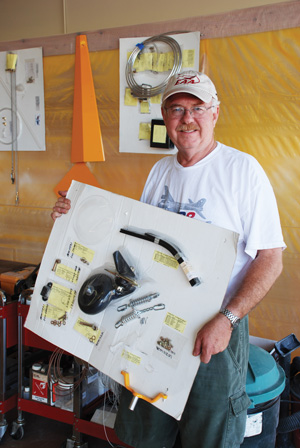 The author holds up a vacuum-packed board with tail parts.

The kit building process always starts with an inventory. That way you find out quickly what the company forgot to send you because they didn’t think you ordered it, or it was back-ordered or out of stock. If you call a year after your kit arrives and say, “Hey, you guys forgot to include the bolts for the ailerons in my kit,” the company will likely say you just lost them, which may be right. It is much better to get that sort of thing straightened out right away, because the missing part might be one that costs a lot more than a few bolts.

With the Texas Sport, most of the parts come vacuum-packed on boards, so seeing what you have is pretty easy. Inventory lists for most major subkits speed the inventory process. Unfortunately, in this case some of the subkits did not have lists, making them much harder to count. Lots of emails and phone calls later we got most of these issues resolved.

Some major parts were missing from the first shipment. I had intentionally asked for the wing parts to come later, because I wanted to take advantage of the lighter spars they were in the process of designing and testing. I expect my patience to be rewarded with a weight savings of about 15 pounds. The fabric covering and paint were also not there, because they ship directly from the manufacturer. The engine and prop are also items that take time to order and secure. But there were still lots of things to work on, or so I thought.

After counting what we could and noting what we believed was missing, we dove into the assembly manual for our initial review. What I like about the manual is the abundance of nice color pictures. My past building experiences could have benefited from a few more high-quality photos. On the other hand, the Texas Sport relies almost exclusively on pictures when sometimes a diagram or a few more words would be helpful.

A few quick points need to be made about the inventory and assembly manual review processes. The urge to plow ahead and skip these steps pulls strongly at many builders, but it should be resisted. The inventory exercise tells you important things: what exactly you received, what is missing, what the various parts look like, where they are found, and whether they need to be painted before you use them. Getting that information sooner rather than later makes the rest of the building experience better.

Similarly, reviewing the full assembly manual in the beginning tells you much about what is to come and where to find the information you need. Often I found the answer to a question from one page on some subsequent page. I saved a lot of phone calls to Texas by just looking at the entire manual first. It also makes it easier to anticipate problems and avoid mistakes. 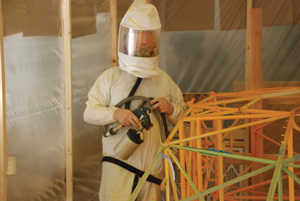 Respirator, bunny suit and more were required prior to spraying paint.

We quickly saw that we needed to paint the exposed parts of the fuselage cage before we started bolting on parts. Uh-oh. We didn’t have any paint yet. It would come with the fabric. (And by the way, the urethane color coat we were planning to use is really nasty stuff. We would need a spray booth and a fresh air respirator, and an HVLP gun and bunny suits.) It looked like we wouldn’t be bolting up any parts for a while.

Drawing sketches, making shopping lists, and calling around to find the equipment we needed consumed the following week’s spare time. Jim and Dondi Miller at Aircraft Technical Support (www.aircrafttechsupport.com) were a great help in getting the right equipment for painting, including a fresh-air system for two people. Their equipment isn’t inexpensive, but what good equipment ever is? The plastic sheeting and lumber were readily available from the local home center, but we still needed a fan to pull air through the spray booth. The Grainger catalog had just what we needed, a 12-inch explosion-proof fan, but I had to swallow hard at the $488 price. The total cost for the spray-booth material, fresh-air system and HVLP gun and the fan came to a little more than $2000. That wasn’t exactly what I had in mind when I started this project, but it was still a lot cheaper that paying someone else to paint the plane.

Before we get started spraying, let’s digress for a moment. The covering and painting materials we are using are probably not familiar to many people, and even if they are, they are not exactly harmless. If you tackle a project like this, I urge you to get material safety data sheets from your supplier and read them so that you know what you are dealing with. Then put them in a notebook marked MSDS and keep it in your work area. If something happens to you, the first thing the paramedics will want to know is what kinds of chemicals they are dealing with. They will be able to do a much better job of helping you if they can get a quick answer to that question.

The Cub fuselage comes from Texas Sport with a green epoxy primer. We chose a traditional Cub yellow for our finished color, but the yellow does not cover as well as some other colors, so we needed a white base coat first. We used the same Air-Tech Coatings epoxy primer that we planned to use throughout, which conveniently comes in a creamy white. In retrospect that probably wasn’t the best choice, because it is a filling primer that is softer than a non-filling primer and thus provides a less durable substrate for the color coat—but it worked. Prep includes a quick once-over with Scotch-Brite and acetone, masking off the areas we did not want to paint, and then into the spray booth. Painting starts with one coat of white epoxy primer followed by two coats of yellow urethane. The tough part is getting all of those tiny tubes fully covered with paint. I attached two vertical and two horizontal 2x4s to the cage with bolts through the engine-mount holes. This enabled us to rotate the cage around easily and get to all those nooks and crannies.

Setting up the work area needs to be considered early on. The spray booth is pretty big, and the new project will be sharing hangar space with my GlaStar Sportsman. Some time with the tape measure and the old drafting board resolved the major conflicts as I tried to make everything fit and still have room to move. It is apparent that once the wings go on the Cub, the spray booth will have to go or at least be greatly reduced in size. That shouldn’t be a problem, but it was good to know ahead of time what I was up against.

Zaleski and I have learned a few things about organizing a shop from our experience. One great idea we shamelessly stole from AirCrafters, Inc. of Watsonville, California, was to set up task carts with all the tools and small supplies you need to perform a certain type of work. We have three carts—one for sheet metal work and riveting, one for fiberglass work and one for electrical work. We bought the carts at Harbor Freight for a really good price. However, most of the tools came from more expensive sources. This gets specialized tools out of the main toolbox and makes it easy to move all of them right next to the work being performed. Another thing we did right away was to collect all of our paints, solvents and fabric adhesives and put them in a metal cabinet. This keeps them neatly organized in one place and contributes to shop safety.

An important part of setting up your work area is lighting. It is hard to have too much light, and it’s especially important in the spray booth. We ended up shortchanging this early on and had to go back and install more lighting later when we got to the color coats. Some 8-foot fluorescent fixtures from your favorite hardware store are just the ticket. They are easy to install and not too expensive.

At last we are able to start bolting on parts. That is what we will look at next time—everything from floorboards to rudder trim jackscrews. So far I have blown the entire tool budget and then some, and I am about a month behind where I thought I would be on my carefully planned and entirely unrealistic schedule. You would think I would know better by now with this being my third plane, but apparently not. The good news is I am learning a lot, and so are many people who come by to see the project. It seems that almost everyone has a soft spot in his heart for a Cub.

Kerry Fores - February 14, 2019
0
There are identifiable times when flying becomes more dangerous. One that plays out in...