Home Magazine Builder Spotlight Build It Better: For Want of a Nail 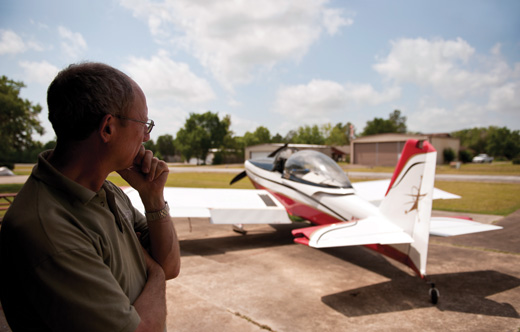 So goes the proverb, which instructs us about the importance of details. This little poem, which ends with the loss of the kingdom no less, goes back centuries in the English literary tradition and reminds us that we need to be careful of dismissing the “little things” that might seem trivial, but in the end prove to be serious. I can think of few areas of human endeavor where this is more true than aviation—a field where speeds and altitudes mean that small problems can become big ones (with fatal consequences) in the blink of an eye.

Those who have wandered the hallowed ground of Oshkosh on any given July afternoon have doubtless seen airplanes bordering on perfection. Grand Champions are remarkable to examine, because every rivet is perfect, every line exquisite. It is clear that such a craft is the product of thousands of hours of work by an individual dedicated to leaving no detail to chance. Yet even these airplanes have their flaws, little spots here and there, usually known only to the builder. Perfection is a goal, not an end, but it is a goal that we must strive for when thinking about the details—those items that can lead to failures with greater consequence than simply losing the Gold Lindy. 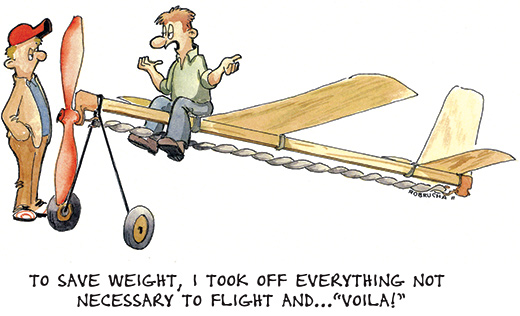 Airplanes are the sum of thousands of parts, and it is hard to pick those that are unimportant. The very nature of airplane design is such that if it is not essential, it will probably not make the final cut, because weight is performance and performance is everything. This leads us to realize that if the designer has done his or her job properly, there is little in the initial design that can be omitted, or that is not essential. Every nut, every bolt has its purpose. In today’s airplanes, where electronics have become more important, we have to extend that thought to the hardware and software that help us navigate our aircraft or might even keep the spark going to the engine’s cylinders. 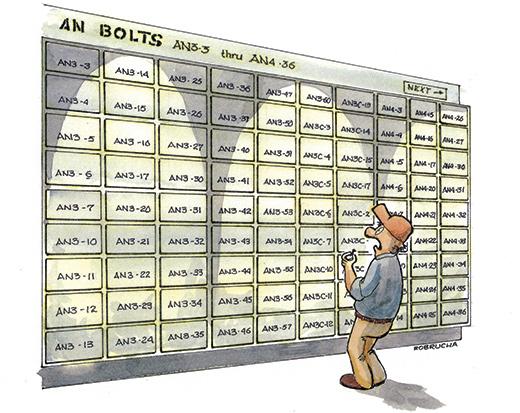 I know of no “fly-by-wire” homebuilt kits out there today, but the way we tend to embrace new technology, it is only a matter of time. Just think about this: An average small computer probably contains at least a million words of software. Each word is made up of maybe eight individual bits, which can either be a one or a zero. And at the front of each of those words is a “sign” bit, signifying whether the word (or number, more correctly) is positive or negative. If you get one sign bit backward, you go down, instead of up, left instead of right. With those millions of bits in the computer, if just one sign bit is wrong, the whole thing can fail. This is different from being slightly low or high with an analog torque value on a nut somewhere. There is no tolerance when it comes to binary software; it is either right, or it is wrong. 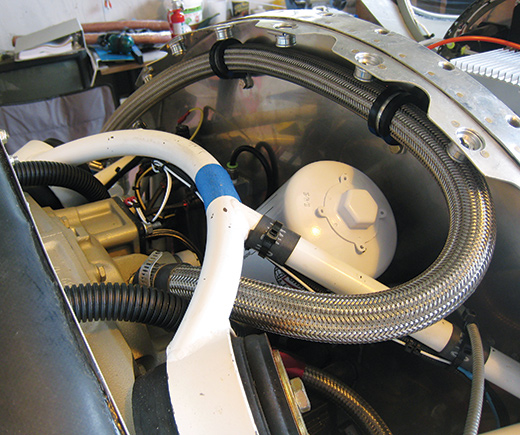 Details in the engine compartment mean padding the mount tubes with rubber or silicone tape if you need to attach a wire tie.

Whether it is in how accurately we locate fastener holes, or how we crimp wire terminations, the details make a difference. For example, the rear spar attach points on most RV aircraft are drilled to hold the angle of incidence that is carefully adjusted when installing the wings. This is a pretty important pair of bolts (one for each wing) that not only sets this critical angle, but keeps the wing from twisting off under load. Edge distance on both the spar stub and the fuselage center section is of paramount importance in order to leave enough material around both holes to avoid this bolt “pulling through” under design loads. There is not a lot of tolerance for these bolt positions because there isn’t much excess material in the components, so it pays to measure, measure, and measure again to make sure that the bolts are in the right place and all limitations are observed. These two holes are among a couple of thousand that must be drilled in the assembly of an RV, some of which matter less, but few of which matter more. The builder either needs to be very educated on the structural design of the airplane, or treat all of these holes with equal respect. The details that matter will then take care of themselves. 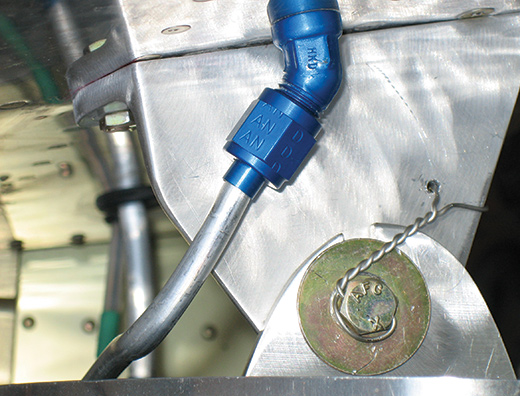 It’s a pretty fuel-line installation, but it wasn’t quite right. The tube had to be remade because it was rubbing on the large bracket. All it took was a slight kink to make it better.

Wire crimps? How could they be a problem? My simple airplane will fly just fine without any electricity at all! Well, sure, but do you have an engine with a magneto system? Does it vibrate? Remember that the P-leads that connect the magnetos to the ignition switch are used to ground the mags to keep them from firing. If one of those leads comes off, then the engine is “hot” when just sitting there—all it takes is a pull on the prop with just the right combination of fuel fumes to let it fire. Have you ever done maintenance around your prop with the cowling on when you can’t see if the P-leads are still connected? Do your friends or children visit your hangar and walk near the prop? You get the point— P-lead connections are vitally important for safety, so their crimped terminations need to be secure. 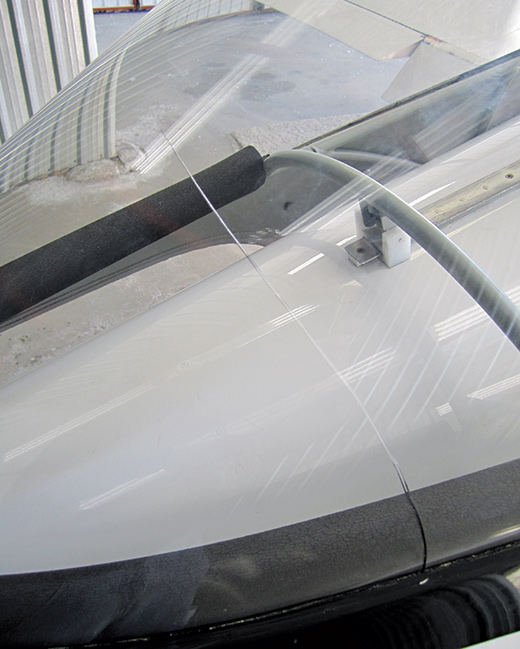 All it takes to cause a crack in acrylic is a single rivet hole with a burr or micro-crack. Take the time to polish edges and holes correctly.

I have had acrylic windows crack suddenly due to residual stress from poor fitting combined with micro-cracks at their edges. It will surprise the heck out of you when it happens next to your ear! If the window had been fitted properly, and the edge polished with care, this probably wouldn’t have happened. I have seen wire ties pulled so tight around a cable bundle that the insulation started to “flow” and squeeze out away from the conductor—it takes time, but given enough years of service, this can lead to a bundle short. I have seen the rubber tubing on a battery-case drain become brittle and crack, spilling battery acid inside the tail cone of an aluminum airplane. When neglected long enough, it renders the fuselage a piece of junk—or a candidate for expensive repair. 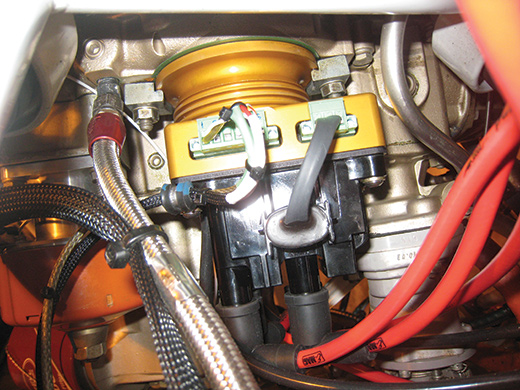 Wiring to an electronic ignition can vibrate over time, leading to failure. Adding Adel clamps will increase reliability.

Details count in so many other ways as well. When you approach an airfield and give a position report “Pearland Regional Traffic, RV 188PD 5 miles to the south,” are you really 5 miles out, or is it 4, 6 or 7? Are you truly south, or is it more like southwest? It makes a difference, because once you tell people where you are, that is where they will be looking. If you are actually somewhere else, they will miss you entirely and, worse, stop looking for other traffic where it should be.

Years ago, at the beginning of the space age, people who had made their living designing and building airplanes started to build rockets. They used the same techniques, materials and methods, but soon discovered that the new vehicles were horribly unforgiving—errors simply couldn’t be tolerated, because when something went wrong, the rocket just blew up, and there was little left to even evaluate, much less rebuild. Most of the spectacular mishaps that you see in visual retrospectives of the early days of the space program were caused by details—rags left in an engine compartment, a tiny amount of contamination in a liquid oxygen line, or a single pin in a large plug that was recessed a millimeter below the height of its neighbors. 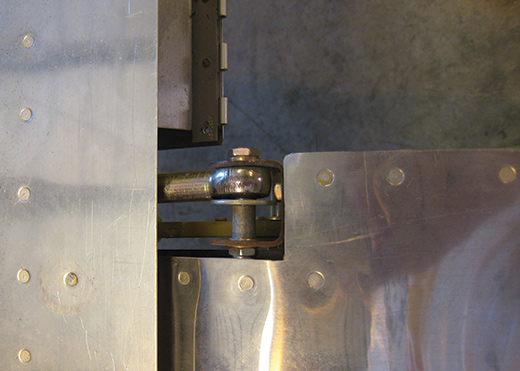 Hinge hardware frequently needs to be shimmed to fit perfectly. Don’t be in a hurry; find the combination of washers, spacers and nuts that works.

One famous aborted launch was caused by just that—a single connector that came apart a millisecond before it should have and prompted the engine to shut down. Unfortunately, the rest of the rocket thought it was still going, and went through all of its programmed events, including firing the escape rocket and deploying the parachutes. The only problem was that it was still sitting on the launch pad. It was a spooky day for the men in the nearby bunker, because the fully fueled rocket was now sitting on its tail with nothing holding it down—and a parachute at the top, wafting in the wind. All of this occurred because one small pin wasn’t fully inserted in its connector. Details.

While any reasonable person knows that perfection is unattainable, it is still important when building or flying aircraft—especially Experimental/Amateur-Built aircraft—to make sure that we think about the details and try to get them right. While we rarely worry about horseshoe nails in these modern times, we still don’t want to lose our riders—especially when we are leaving the safe, firm earth to go hurtling through the magnificent blue sky.