I first read this quote in a rock-climbing catalog when I was a young man studying aeronautical engineering. It was attached to a perfect piton—one with not an ounce of extra metal anywhere, designed so that you could carry more on the mountain, and have just exactly what you needed. While this excited me as a climber, it interested me just as much as a budding engineer, for the truth of the statement rang especially clear in the design of aircraft. Structurally, you want just enough material to meet the strength requirements, with no extra to add weight that will take away from performance.

But this idea extends beyond structure to systems design. The more complex we make something, the more difficult it is to build and understand. Additionally, the more components we have in a system, the more things there are to fail, making reliability a problem. In a world gone (sometimes) crazy with redundancy, it might seem counterintuitive that less can be more, but if good practices and sound components are used, that is most often the case. 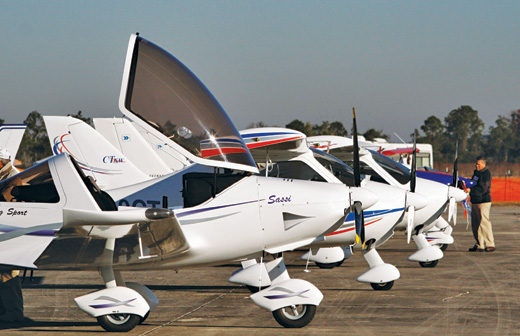 Many Light Sport Aircraft designs are models of simplicity and low horsepower.

Aircraft are different from cars, trucks or boats. Weight is important, as is size and wetted area. Smaller and lighter—these are worthy goals for any designer. Most of us in today’s homebuilding world are not doing structural design—we are building from kits or plans where that work, for the most part, has already been done. We might add a lightening hole here or there, agonizing over the effects on strength that our obsessive behavior may have caused. But generally our structure is close to what the designers intended. (The best way to save 10 pounds in a finished single-engine homebuilt? Put the pilot on a diet!)

I won’t talk much more about structure, but I will expound on simplicity when it comes to systems design. It seems that today’s homebuilding web sites, magazines and catalogs are just brimming with new high-technology electronics and mechanisms for us to incorporate into our airplanes. From EFISes to power managers, we have at our hands—limited only by the size of our checking account balance—the capability of building an airplane that rivals the space shuttle in electronic capability. This is actually not hard to do, considering that the shuttle was designed in the 1970s, and the upgrades since then have always been well behind the generally available technological standards. 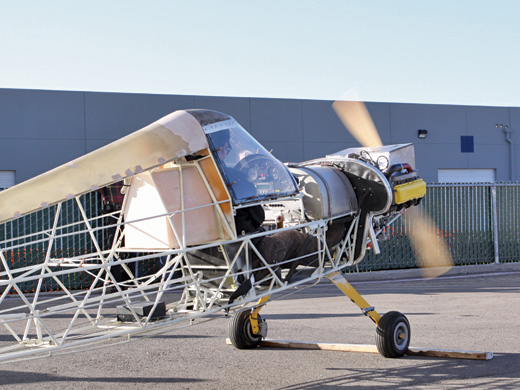 While the author is all for simplicity and lightness, this builder might have gone too far by eliminating both the covering and the wings.

My own Van’s RV-8 is no shuttle, but it has a two-screen EFIS, fully approach-coupled autopilot, four GPSes, three electrical busses, two batteries and two alternators. Yes, I like to have a very capable airplane. Yet I don’t have anything that I can’t justify as fulfilling a specific role in my primary mission requirements or backup plans. My electrical system sounds complex to some, but when it comes right down to it, I have far fewer components than many aircraft with similar redundant capabilities. I believe in old “Saint-Ex” and the more modern version of his statement: “Keep it simple, stupid” (the KISS principle). 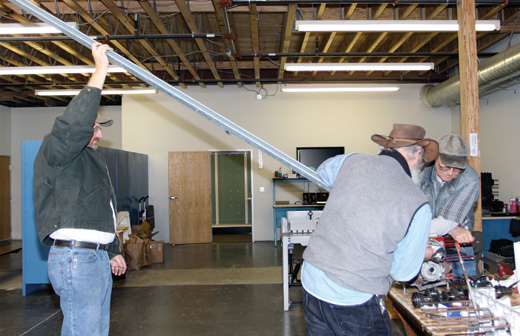 Simplicity applies to tools as well. You could buy or borrow a powerful machine for big tasks, or you could just apply a lot of leverage.

It is quite an ego stroke to fly a complex airplane, one with lots of switches and devices that only we can understand. To have a checklist a mile long makes us feel like mighty astronauts or test pilots. Mere mortals are not fit to lift our flight bags, much less understand the complex litany of procedures and processes that we must go through simply to get our airplanes to the runway for takeoff. But complication for complication’s sake is always counterproductive when it comes to completing the specific mission of an aircraft—unless the mission is to stroke the pilot’s ego, of course. 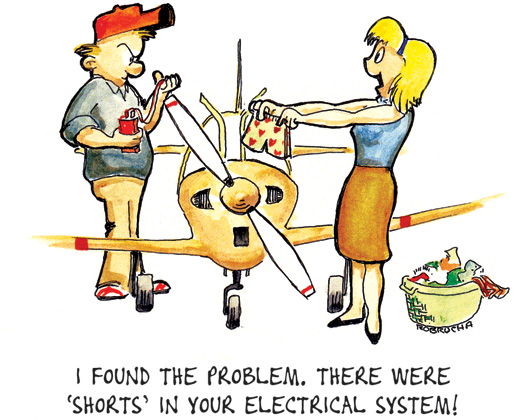 I have seen some complex redundant electrical systems in recent years whose failure procedures sound like the litany of steps called out in the movie Apollo 13 as the astronauts worked with their failing fuel cells: “I’ve got a Main B bus under volt, amps on Main A and C are low and decreasing, oxygen pressure is zero, fuel cells 2 and 3 are reading zero, the entry batteries are discharging….” Wow. That sounds both frightening and pretty cool at the same time. Everything in that spacecraft had to be managed just about manually by throwing switches. Power had to be routed from source to destination by configuring the systems one step at a time. And if you got it wrong, you might end up with a shower of sparks. As they say in the movie, that’s a bad way to fly.

Contrast that with the much simpler scheme available with today’s electronics. A single box can be fed from two different power sources through solid-state diodes so that the box will draw from whichever source has voltage. Wire it to two or three busses, each with its own supply of electrons, and if a source goes down, the pilot need take no action at all—the good source picks up the load. Best of all, no moving parts! Not only is this simpler and more reliable, it is actually more in line with the design philosophies of modern jet cockpits: In an emergency, let the system take care of itself with no human interaction. 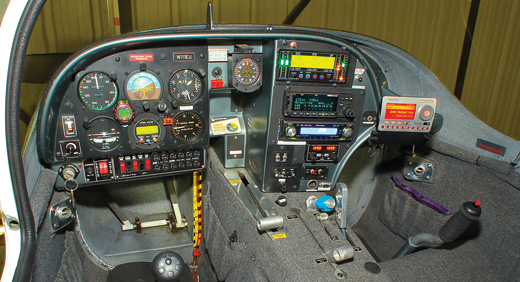 There is nothing wrong with a complex instrument panel as long as every element serves a specific purpose. Having just enough to safely do the job should be the goal.

Have you ever seen the fuel valves on the Spirit of St. Louis? I doubt there were more than two guys alive who knew how to get all of the fuel in those many tanks to the engine (Lindbergh and the plumber who built it). Fuel systems are essential to continued flight, yet I see people adding complexity that provides no additional function and lowers reliability. Extra fuel is great, but if it takes a book of procedures to get it from the auxiliary tanks to the engine, is the system really workable and reliable? I have seen auxiliary tanks added to an airplane that require pumps to move the fuel to the mains. I have also seen the same amount of fuel added to the same type of aircraft in which the main and aux tanks were plumbed together at the wingroot, increasing the fuel capacity by the identical amount, without adding operational complexity at all. The tanks on each side were simply bigger than before. (I recognize that for structural and other reasons, such an option is not always viable.) 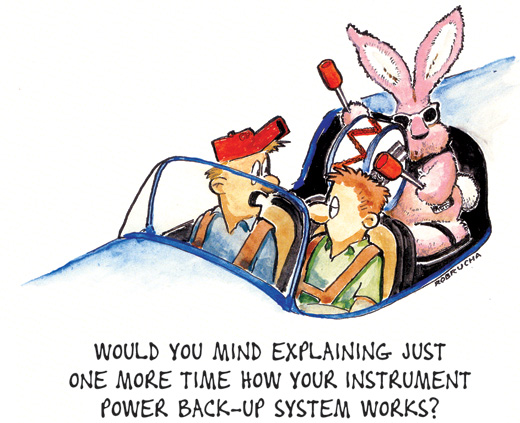 Complexity in design can have more than operational or safety affects—it can bring a project to its knees, or halt it altogether. I have seen projects abandoned in hangars and garages when a builder decided to make a gear retraction mechanism that was so complex that he simply forgot what he was building, or how it might work. In fact, the modern generation of “complex” personal aircraft, both commercial (Cirrus, Columbia) and Experimental (RV-10) are simply using superior aerodynamics to get the same speed and performance out of fixed gear as they could out of retractable gear, and avoiding the complexity altogether. That is simply thinking outside the box to get to a design goal: to make an airplane go a certain speed, not to make a retractable-gear airplane for its own sake. 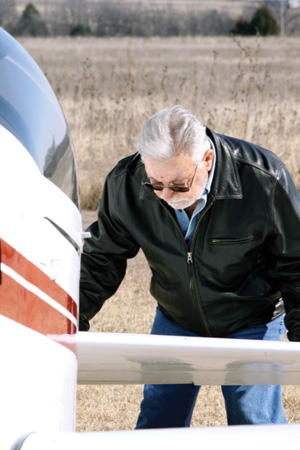 Pen Mightier Than the S-IC

To sum up the concept of simplicity, I am reminded of a story from the heady days of the Apollo moon program. Everyone involved in technology in the United States wanted to be a part of it, including the makers of writing implements. A large company spent millions of dollars (its own money, not taxpayers’) to design a ballpoint pen that would work in the absence of gravity. (We’ve all tried to write upside down with a Bic, right? Doesn’t work very well.) They perfected this marvel of technological achievement for NASA’s astronauts to use as they completed then-President Kennedy’s goal of landing a man on the moon “before this decade is out.” At the same time, the Russians were working on their own program, trying to maintain the thin lead they had built in the early 1960s, always one step ahead of the Americans during the Mercury and early Gemini missions. But they had little extra cash, and were masters of simplicity. Their solution to the zero-gravity writing problem? A pencil.

As always, we are free to choose how we equip and operate our homebuilt aircraft. We can choose to make them complex or simple—or have high performance or low performance. And those two design areas are not necessarily mutually dependent. We can chose to build a simple and elegant design with high performance that is easy to understand, or we can build a complex design that is heavy and difficult enough to operate that it is far less satisfying. Either way, it is important to know that we have a choice, and that we go into the design phase with our eyes open, guided by principles we understand. Personally, I stick with old Saint-Ex. When I have achieved my performance goals, I begin to search for ways to remove items and weight, further increasing performance and reliability. I look for that perfect design point where there is nothing left to be taken away.