Home Magazine Exploring Screws Care, So Should You

A drill bit is not an heirloom. But if you have your grandpa’s cigar box of drill bits, treat them as such and don’t use them to build your airplane. This applies to old screwdrivers, dull side-cutters, wood rulers from a Studebaker dealer, dry Sharpies, old band saw blades, and electric hand drills manufactured before the Carter administration. (You know the kind; you can feel the steel gears meshing, see the dancing blue sparks, and smell the ozone.)

When it comes to buying tools, you’d struggle to find anyone less enthusiastic than I about pouring a wallet’s entire contents into the hand of a mobile tool vendor for a screwdriver. Some of you, however, may be building an airplane as a ruse to grow your tool collection. There’s nothing like the chrome valve covers of a Lycoming engine to draw attention away from a spanking new two-tiered roll-around tool chest. I applaud your sleight of hand. Personal budgets and motivations aside, screws are what we need to please, and screws love a crisp screwdriver blade. In that regard, a new, no-name screwdriver beats a professional-grade screwdriver that has pried open paint cans. 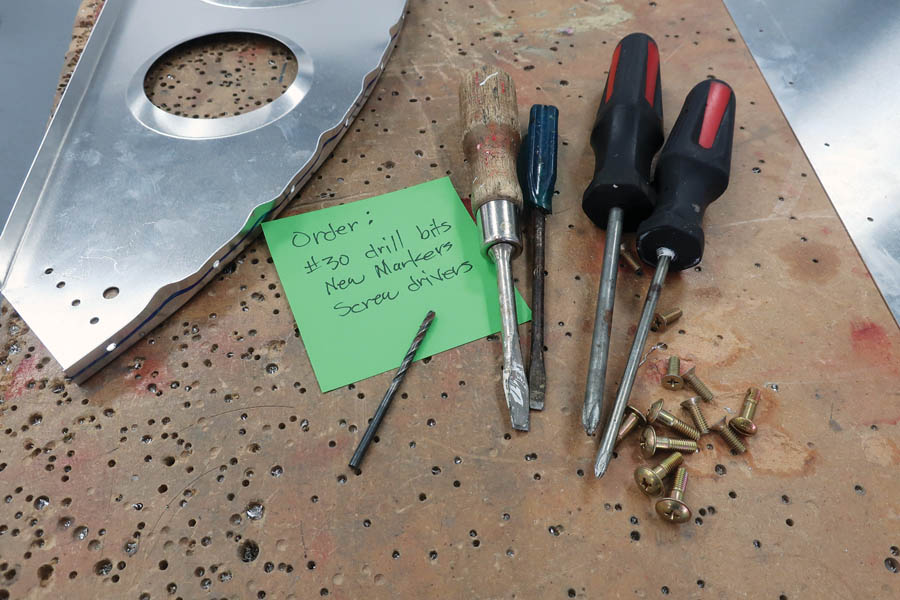 Almost every screw you install will be held in place by the unflinching grasp of a Nyloc locknut. Those little guys resist installation from the first, but once in position, they cling to the screw like peanut butter to the roof of a mouth. Fighting such forces with a rounded, bent, or chipped screwdriver blade is folly. And poor form. If you’re lucky, you’ll get away with it, but you’ll still inflict damage on the slot, making the screw harder to remove in the future and look frumpy. If you’re unlucky, the screwdriver will slip from the screw and gouge the airframe’s skin. Maybe yours, too. There goes the money you saved by using the screwdriver Grandpa Wilbur gave you when you were a youngster, after he bought a new one because he was smart that way. Unless grandpa passed the screwdriver to you with a far-off look in his eyes and a story of how he and grandma met because of that screwdriver, he figured you’d only use it to dig up worms. Buy a new set of screwdrivers and dedicate them exclusively to your airplane project.

If your project could place a personal ad for tools, it would read like this:

“Fuselage side skin (delicate 6061-T6, .025-inch thick) seeks #40 drill bit for short-term relationship. Must be sharp, clean, reliable, and have no rough edges. No dull personalities, please. I’m not looking to get walked on, so if you’ve been seeing a lot of other skins, do not reply.”

Airframe skins long for a sharp drill bit precisely positioned by a crisply marked scale (ruler, yardstick, or meter stick). A dull drill bit can walk across your expensive fuselage skin faster than a politician strides across a stage to accept an endorsement. A new bit, bursting with enthusiasm, will dig in and get the job done. Purchasing drill bits one at a time from a hardware store becomes expensive, so purchasing in bulk packs of 12 or 24 from an industrial supply house is the best option. You could buy a drill sharpening tool, but they cost $60 and up, and interrupt your work rhythm. When you’re in the zone, up-drilling 3000 holes in a wing panel, the last thing you want to do is trot off to a hardware store for a new one or stop to sharpen your only #30 drill bit. It’s much faster to swap out a dull bit for a new one, and for $60 you can buy about 34 drill bits. I apologize to tool collectors for spewing such nonsense. For the best of both worlds, buy a bulk pack of bits and a sharpening tool, and sharpen your accumulated dull bits when it’s convenient.

A side story, if I may. Early in the build of my Sonex—which has roughly 10,000 rivets, that’s 20,000 #40 pilot holes to drill—I came up needing a #40 drill bit. I scoured Oshkosh (the city, not the fly-in), but every store had only an empty hook labeled “Drill Bit, HSS, #40 Dia.” By my third stop, I was convinced I was one store behind Sonex Aircraft’s John Monnett in my search for #40 drill bits, as he had five prototypes under construction.

More to the point, there’s no point in efficiently drilling an accurate hole for a cleanly installed screw if the hole is in the wrong place. If the increment marks on your scale (ruler, yardstick, or meter stick) are worn away, or the edge is ragged because your kids (or you, I’m not judging), use it for sword fights, retire it to sundry housework like chasing cat toys out from under the refrigerator, and buy one dedicated for your project. Also, nothing goes better with a new scale (ruler, yardstick, or meter stick) than a box of extra- or ultra-fine-point Sharpies. When working in the Sonex Aircraft shop, I used to joke that the next time we ordered dull drill bits, we should also order more dry Sharpies.

You don’t need expensive tools (or tools purchased from an aircraft supply house) to build an airplane, but having tools that are in good shape will eliminate the potential trouble and accompanying frustration of using tools that are no longer up to the task. Building an airplane is more fun, more efficient, and the results are much better when the tools become invisible to the process. (But not the “Where did I set my Cleco pliers?” kind of invisible.)

More Than You Bargained For

Marc Cook - May 13, 2010
0
It doesn't take a fortune to get a homebuilt aircraft completed and flying, and we look at a few designs that prove the point. By Marc Cook and Mary Bernard.