Thirty years ago, I spotted FIFI at the Akron Fulton Airport and decided to park my RV-4 underneath the right wing for a photo op.

Thought I would take a break this month from all of the technical stuff and share a fun story with you. After all, that’s why most of us play around in aviation, right? This is one of those stories that spans almost 30 years, but I promise I won’t take that long to tell it.

Back in the early 1980s I was a district service manager for Hewlett-Packard, and my office was located between Akron and Canton, Ohio. I had recently finished my first airplane, the RV-4, and once in a while, I would fly from home in North Ridgeville, Ohio, to the Akron Fulton airport. Making the 20-minute trip in the RV was much nicer than the usual hour+ drive in the car.

Some of you may remember the history of this particular airport, as it still has one of the very large hangars that the U.S. Army used for dirigibles in a much earlier era. The hangar is very visible from long distances and makes it easy to find the airport. The hangar’s immense size can only be appreciated from within, and while I never witnessed it, I have heard that it sometimes rains inside the hangar! There is one just like it at Moffett Field near San Jose in California. It can be seen from Highway 101 when driving from San Francisco to San Jose, and it, too, was used for the same purpose of housing the large airships. 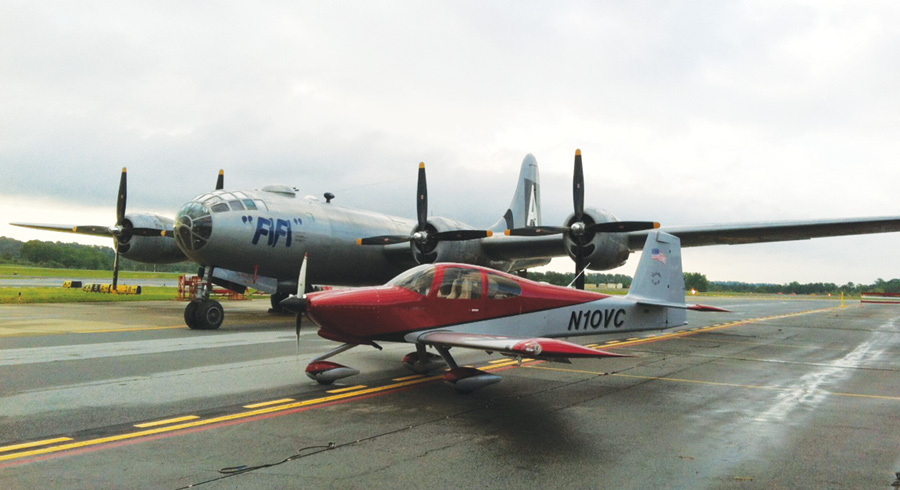 What a surprise to land my RV-10 at the PDK airport on the way to work one morning and see FIFI sitting there! It brought back memories from 30 years ago of FIFI and my RV-4.

So, guess what happened on a day that I did not fly the RV-4 to work? A co-worker informed me that FIFI, the very famous B-29 that we had seen at Oshkosh multiple times, was actually parked at the Akron Fulton airport. Wow, how did I miss that? Well, you do have to remember that it wasn’t quite the age of the internet yet, so news traveled differently and a little slower. I couldn’t wait for the day to end, as my schedule was too tight to slip out of the office any earlier. As soon as the workday ended, I did rush home to get the RV and Carol, and I flew back to Akron. I had also told my family and friends about it, so a few of them also showed up.

Then I got an idea. No one was around, so I decided to go for broke and parked my RV-4 underneath the right wing of FIFI so I could get some pictures. That was a really nice bonus. I did remember to bring along my trusty camera and hoped for the best that the pictures would turn out OK. (Back then we dropped the film off at the local drugstore and waited a couple of weeks to get them back.) As luck would have it, a couple of gentlemen showed up who were clearly part of FIFI’s crew and, as expected, I was politely asked to move my airplane. No surprise, and no problem for me as I had my pictures. But what happened next was beyond belief. One of the crew members told me they were having a problem with the number 2 engine and wondered if I would mind sitting in the cockpit to hold the brakes and run number 2 for them while they made some adjustments. Huh? I really had to pause a minute to make sure he was in fact speaking to me. I figured I had missed Paul Poberezny or some other recognizable aviator standing behind me. Sure enough, it was me he was speaking to. Can you imagine that happening today? No way! 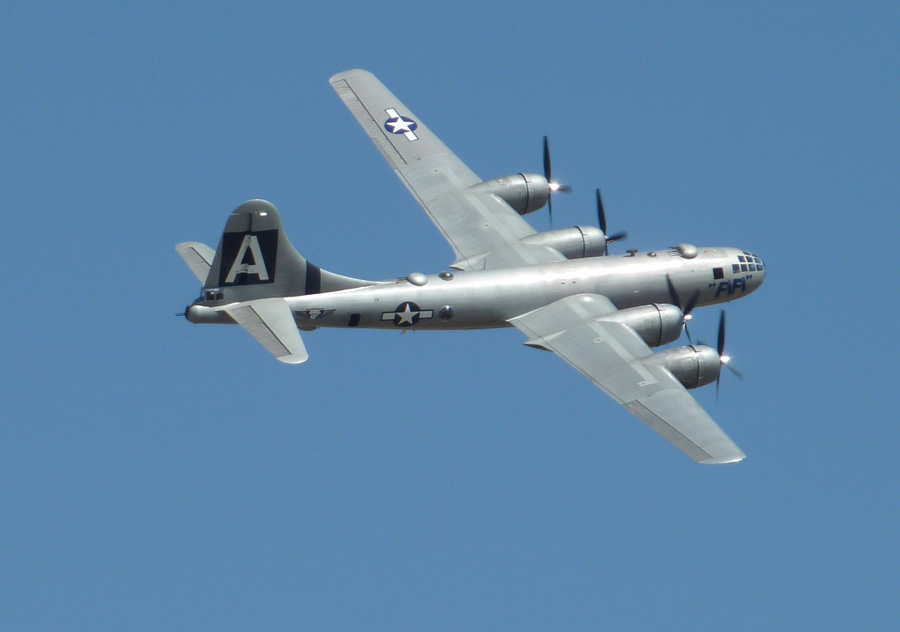 I tried to contain my excitement and probably said something like, “Sure, I can make some time for that,” and then I proceeded to sit in the cockpit and run the B-29 for them. It was way cool, and nothing like the C-130s I used to work on in the U.S. Air Force as an avionics technician, sometimes doing engine runs to troubleshoot problems. It was only one engine, but it was a radial engine, it was on FIFI, and it sounded wonderful!

Of course family and friends were watching and I tried to act like it was just a normal everyday thing helping someone run up their B-29, but the grin on my face probably reflected that I felt like the cat that just got the mouse! My RV-4 sure seemed small on the ride home, but what a memory!

Now fast-forward over 30 years. We are now living in Atlanta in a flying community called Mallards Landing. Mallards Landing is located on the south side of Atlanta, and of course my office was on the north side of Atlanta. I’ve really never been able to locate close to work, I guess. Being closer to airports was always more important. Anyway, the traffic in Atlanta is absolutely horrible, especially getting from the south side to the north side and back again during rush hour, so I tried to commute as much as possible in the RV-10. I would leave a car at DeKalb-Peachtree Airport (PDK) and drive the remaining 20 minutes to the office. That made for a nice 15-minute flight instead of a sometimes 2-hour drive. And starting the day with a sunrise over the city and ending with a moonrise on the way home really was uplifting, and seemed to make the day’s problems diminish in importance.

Obviously with my daily commutes the tower got to know me and usually granted my choice of runways to allow quicker access to my usual parking spots, sometimes even landing me in the opposite direction of traffic when weather and safety permitted. It was very much appreciated. Well, one morning as I was turning final, I couldn’t believe what I saw on the ramp. There it was—FIFI again, and looking much nicer than it did in 1985, having been through a complete restoration. I already was formulating a plan! 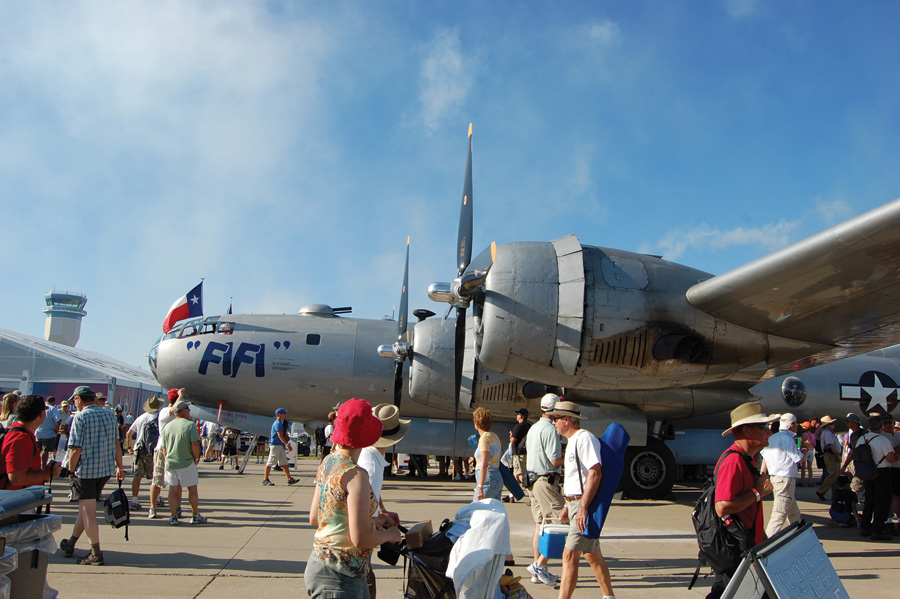 As I turned off of the active runway and was cleared to go to parking, I said I needed a detour and wanted to park by FIFI. Cleared as requested. Yes! Knowing I’m a little older than I was 30 years ago, and the -10 being quite a bit heavier than the RV-4, coupled with needing to get to the office, I didn’t quite park under the wing. I did, however, park close enough and tried to recreate the picture from so long ago. No film this time, but I had my trusty iPhone. I couldn’t wait to call Carol and tell her about it. It seemed so surreal. I wanted to wait around to see if they needed me to run an engine again, but I came back to my senses and parked the RV-10.

I probably recounted the story to too many people at work that day, but I really couldn’t believe it had happened. Lucky for me no one was around, as I’m sure the crew is very protective of what should be a national treasure.

For Christmas that year I received another surprise. Somehow my wife found the earlier picture, and my daughter-in-law Cathy merged the old picture with the new one in a frame. Now it sits on my desk in my home office. I know I have shared many of my aviation adventures with you. This particular set of events has always been special, as neither one was planned or expected. It has been a reminder of how good things can happen when you least expect them!