On one of our most recent lunch flights in the Stearman to the Peach State Aerodrome in Williamson, Georgia, a neat thing happened that really demonstrated how flying inspires people of all ages. Peach State has a very active youth program with almost 100 participants ranging from middle school to college. They enthusiastically work on all kinds of aircraft projects under the tutelage of experienced volunteers and the local EAA Chapter 468, trading work time for flight hours in the club’s aircraft. A few of the students have already soloed or earned their Private Pilot certificate. In fact, one of them flew the club’s restored Piper Cub to Oshkosh. The passion displayed by these kids is amazing, and is a reminder of the awe I, and probably most of us, had for aviation in our younger years. To be able to participate in a program such as this would have been the closest thing to heaven I could have imagined! 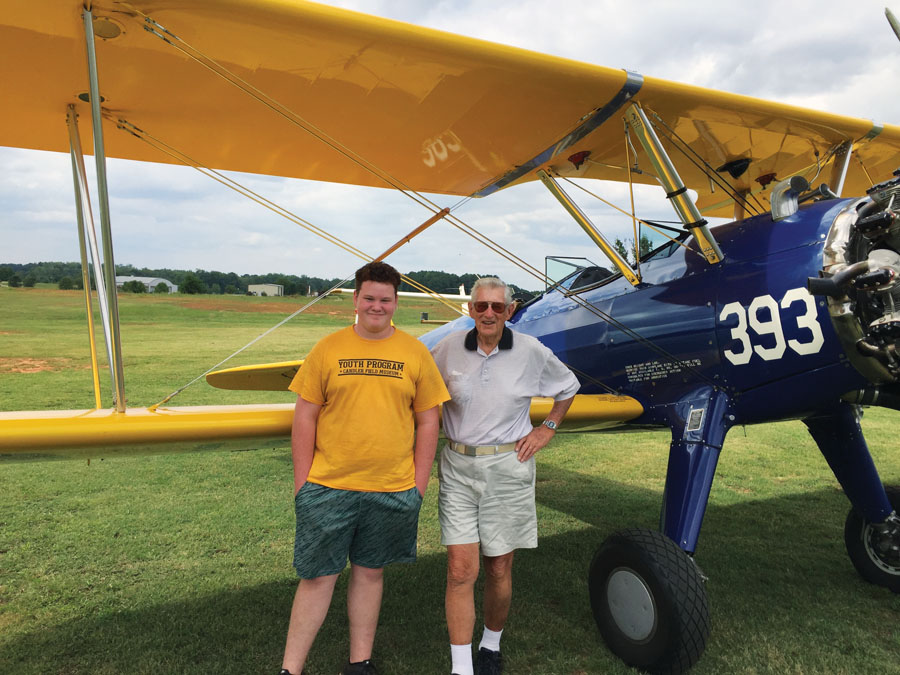 How’s this for a contrast in student pilot ages? Jack is 13 years old and has 17 hours of dual, and Ewart is 93 with 16 hours of instruction this year. It’s amazing how the flying bug can afflict people of every age.

Fun for all Ages

On this particular weekend we witnessed the same, if not greater, level of enthusiasm by an elderly gentleman who happened to be seated at the table next to ours. A friend and Peach State resident, Dr. Ira Rampil, who is an AME as well, introduced him to us. His name is Ewart Lockyer, and he is Ira’s wife’s uncle and a WW-II veteran. The shock to me is that he is 93 years old and is currently taking flying lessons! I was skeptical at first, as from his looks and demeanor I guessed his age to be around 70. So far he had accumulated 16 hours in the last few months and is absolutely focused on achieving his Private Pilot’s license. His enthusiasm and drive so impressed me that I helped him add a half hour of Stearman time to his logbook. I sure hope he is successful, and more importantly it gives me hope that I could still be flying at his age.

The contrast in ages really stood out to us, and we managed to get a picture of Jack Reynolds, a 13-year-old participant in the program, and Ewart next to our Stearman. Jack has amassed 17 hours of instruction in a Stearman, and his instructor is one of the local aviation legends, Harry Balance. Harry happens to be north of 75 years old and has been flying Stearmans for longer than I have been a pilot. We look forward to hearing that both Jack and Ewart have achieved their aviation goals.

We’ve met a number of pilots who have flown well into their 90s, and even had a Stearman pilot friend who was an original Duster pilot when Delta Air Lines was just beginning. He was also well into his 90s and still flying his Stearman until he finally succumbed to cancer. I am sure many of you are aware of very old pilots as well that are still active in aviation. This particular lunch event prompted me to start thinking about the potential challenges of aviation as we age, and I thought I would share some of my thoughts with you.

First, I will be clear that I fully intend to keep flying for as long as I can, and I hope that I will be able to achieve that well into my 90s, assuming I live that long. Yes, we are all mortals, but we really don’t like to think about it. So, it begs the question: How do we continue to fly safely as we age? Of course, I am no expert on this, but I have a few ideas, and I promise I will keep them related to aviation activities and not diet or health. 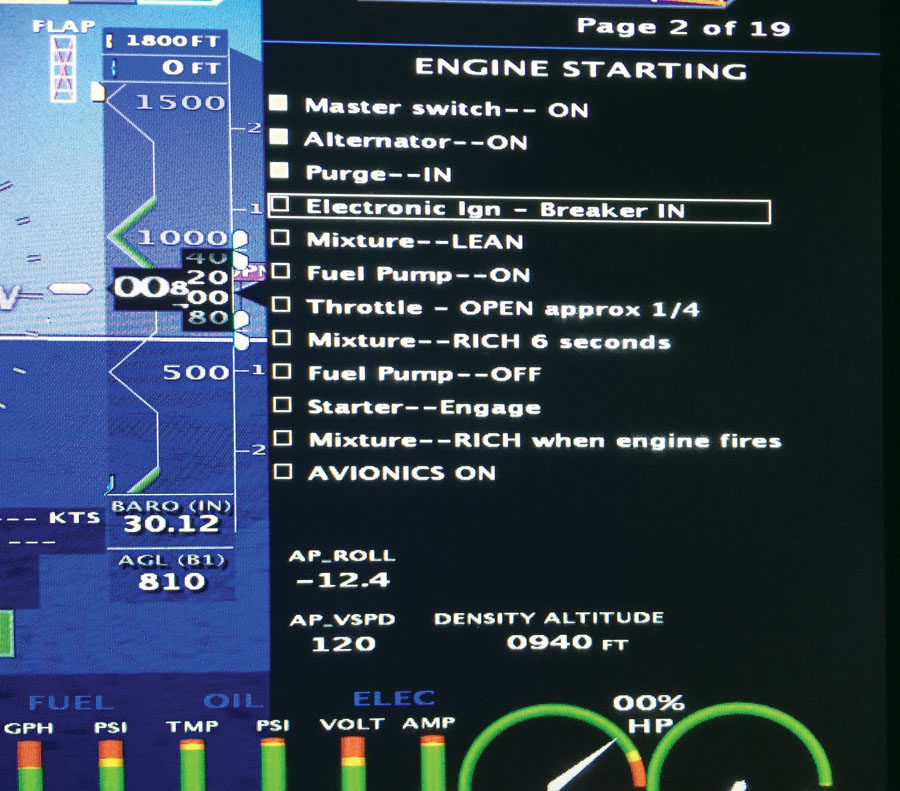 The use of checklists is certainly a best practice and should be an absolute requirement as we age. Glass cockpits certainly make it easy to create and modify a checklist directly pertinent to the aircraft, with checkmarks added as each item is completed.

Right or wrong, it has been my observation that some of the most enthusiastic elderly people I have met have been those who are involved in aviation. Perhaps it is because I hang around aviation people? Maybe, but I also see a lot of elderly people in other walks of life. There too, the most enthusiastic ones seem to be the ones who have a purpose and are driven. I think aviation does that to those of us who are really immersed in it. I think all of the required knowledge, along with the constant challenges of each flight (a good thing), help to keep our minds sharp. I think the little dose of adrenalin we get each time we push the throttle forward (for some pilots it could be the landing!) is healthy. It keeps us wanting more. It gives us something to live for.

There’s no doubt that our cognitive abilities diminish and our reflexes slow as we get older. As pilots we don’t like to admit it, but it happens. This is where I think the experience gained throughout our flying life, along with good habits, will help us continue as safe pilots as we age. Remember, one of the adages we were given as newly-minted pilots was to fill the bucket of experience before the bucket of luck ran out. Well, assuming we got here without the luck running out, we now have this bucket of experience to rely on. Even if we happened to have some bad experiences along the way, hopefully we learned something from them and became a better pilot. There’s also a high probability that best practices such as careful preflights, use of checklists, and not pushing the limits of the aircraft, weather, or pilot were included as well. So, rather than get cocky at this stage of life, I think it is important to do some self-reviews and see if there are areas for improvement, identify any strengths and weaknesses, and then figure out how to not rely on Lady Luck. 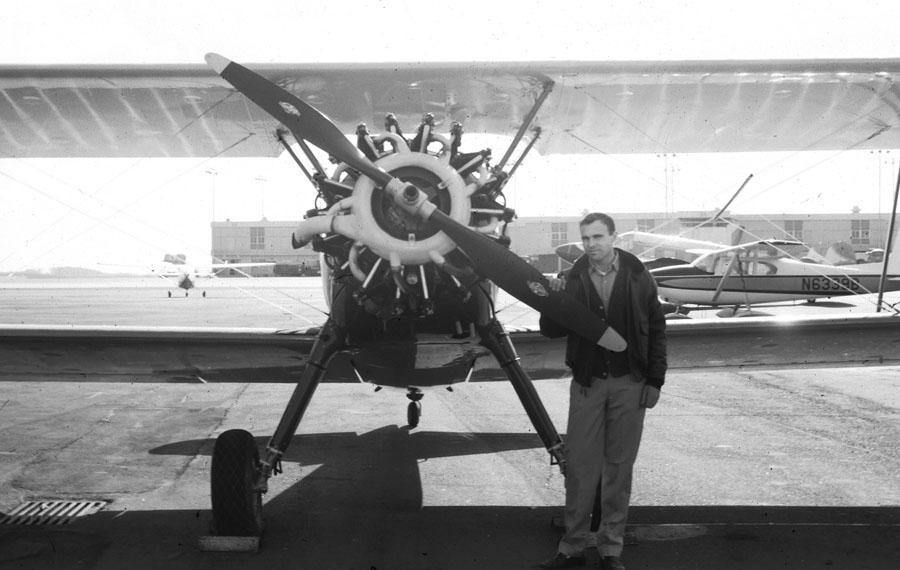 A much younger Harry Balance with his Stearman at the Atlanta Terminal in 1966. Harry is still flying the same Stearman today.

As an example, like it or not, as we get older perhaps our ability to fly long legs under instrument conditions, followed by an approach to minimums, especially single-pilot operations, isn’t quite what it used to be. Shorter legs in IMC or perhaps raising the personal minimums might be in order. I would venture that the number of missed trips may not even be impacted. I am also a fan of being thick-skinned when it comes to critiquing my own piloting actions. Every time I have another pilot in the airplane, I make it clear that they are allowed to question anything they don’t understand or to speak up if they are uncomfortable about anything, including my actions. I do make it a habit to explain what we are going to be doing ahead of time, such as descents into clouds or initiating an instrument approach. It serves several purposes for me: to make sure everyone knows what is going on and sometimes to inform them I will be busy (airline sterile cockpit rules are a best practice), as well as to review in my own mind out loud what I am going to be doing. Sometimes it is easy to catch a mistake this way before the mistake is actually made, like forgetting to put the minimums in the window prior to the final approach fix on an instrument approach. I also make it a habit to review each and every flight in my own mind after landing or later during the same day while it is still fresh in my mind. Usually it’s all good, but every once in a while I admit that I could have done something a little bit differently or better.

And while we are on the topic of self-critiques, let’s talk about the Biennial Flight Review. Personally, I think as we get older there is nothing wrong with having a review occur more often than once every two years. I am not advocating for more regulations, but I think taking advantage of the Wings program or even asking a fellow pilot to fly with you once in a while to make sure you haven’t picked up any bad habits can be a good thing. If nothing else, it is a chance to go flying, and who doesn’t want to do that?