As we have discussed in previous months, airplanes are not perfectly rigid. The loads placed on the structure when the airplane is in flight causes it to distort and change shape. This shape change can take many forms. One of the most important of these is the twisting of flying surfaces (wings and tails) caused by aerodynamic loads. Torsional (twisting) aeroelastic effects are a major player in the flutter characteristics of an airframe, but they also can have dramatic effects on the controllability and structural integrity of the airplane. 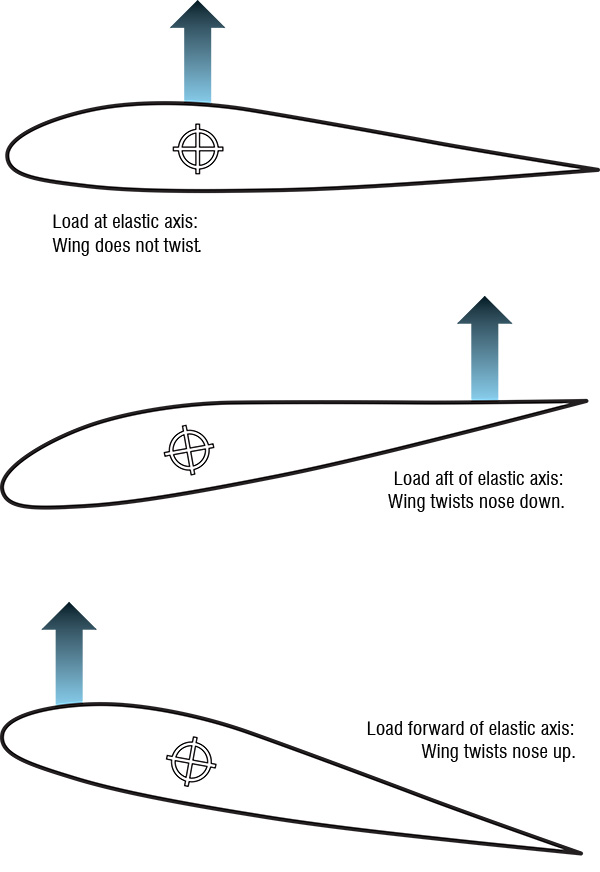 Understanding the elastic loading on a wing is easier with this diagram. If the load is applied directly at the elastic axis, no twist is induced. Forces forward or behind the axis can cause twisting, with resultant torsional loads on the structure.

The reason twist is so important is that twisting a surface changes the angle of attack of the portions that twist. The change in angle of attack changes the lift acting on the surface and also the distribution of that lift. This change in lift can, in turn, change the twist some more and this whole interaction has the potential to cause serious problems. A relatively small twist (a few degrees) can have a large effect on the aerodynamic forces acting on the flying surface, and the airplane. A designer must ensure that if the structure does twist under load, it does so in a safe manner.

The torsional stiffness of the wing is its ability to resist twisting. The stiffer a wing is in torsion, the less it will twist in response to either a lift load applied off of the elastic axis or a pitching moment caused by wing camber or deflection of flaps or ailerons.

On biplanes and early monoplanes, torsional stiffness was provided by the bracing wires. A typical fabric-covered wing structure is relatively soft torsionally, and requires additional stiffening to have acceptable characteristics. This was exacerbated by the relatively thin airfoils used on early airplanes. Some early airplanes, including the Wright Flyer actually used this torsional softness as part of the control system, and warped the wings by varying tension on the bracing wires to provide roll control. As soon as wing-mounted ailerons replaced wing warping for roll control, it became important that the wing structure resist twisting.

The need for stiffness was one of the reasons that the biplane configuration lasted as long as it did. Some early monoplanes with thin, highly-cambered wings actually suffered wing failures where the wing failed downwards in level flight. This happened when the moment caused by the highly cambered airfoil caused the wingtip to twist leading-edge-down so far it caused the front spar to fail. This could be cured with enough bracing, but doing so defeated the inherent aerodynamic advantage of monoplanes. Monoplanes with thin wings and enough external wire bracing to be stiff enough offered little advantage over the inherently stiffer box structure formed by a set of biplane wings and their bracing.

On cantilever wings, the needed torsional stiffness is provided by forming a closed box of spars and skin. For typical metal and composite wings, the skin is continuous, and the primary torsion box is the area from the front spar to the rear spar. Cantilever wings that are designed to have fabric covering use a combination of diagonal bracing between the spars, and a fully-skinned D-tube leading edge to provide the needed torsional stiffness. 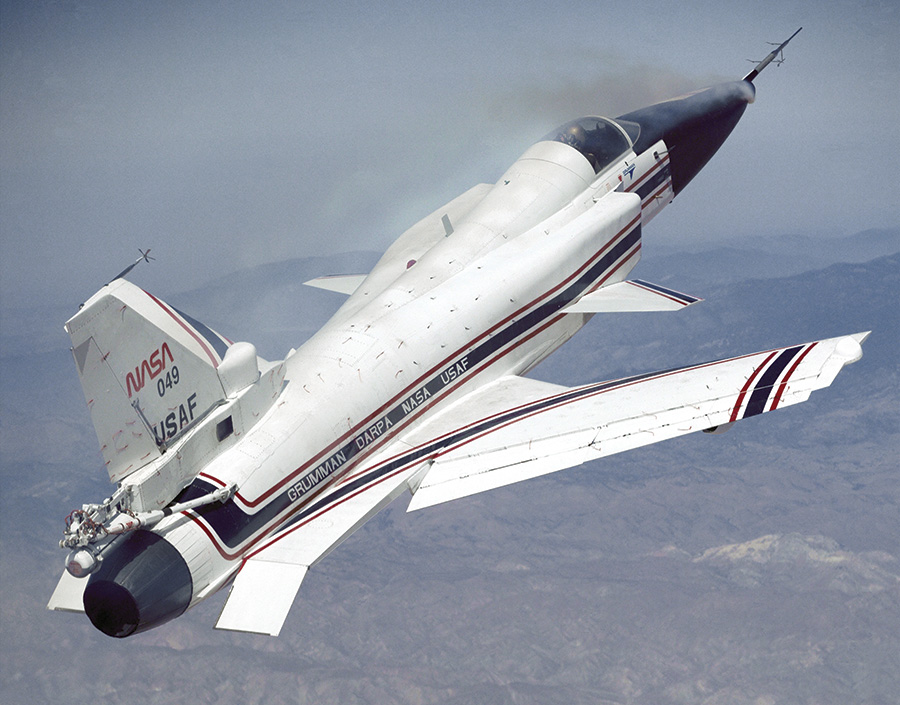 The X-29 is a classic example of a forward-swept wing that required a great deal of structural analysis to come up with a design robust enough to survive the twisting loads.

Typically, wings and tails are designed so that the aerodynamic center of the flying surface is near, or slightly aft, of its elastic axis so that changing lift does not cause the surface to twist.

Three variables control what happens in this situation: the torsional stiffness of the surface, its ultimate strength, and the product of the area of the surface and the distance between the aerodynamic center and the elastic axis.

If the structure is stiff enough and strong enough, it will be able to resist the twisting caused by the aerodynamic load without failing. Increasing angle of attack will cause the surface to twist the leading edge up some and change the lift distribution, but the surface will come to a steady-state shape without failing.

If the surface lacks sufficient torsional stiffness, it will be divergent. If a small increment of angle of attack causes the surface to twist leading-edge-up by more than the initial angle of attack increment, the twist will increase without bound until the structure fails. The possibility of this sort of structural divergence is the primary issue that prevented the widespread adoption of forward-swept wings. Although forward sweep can have significant aerodynamic advantages for airplanes flying at high subsonic Mach numbers and might be very useful for making slower airplanes balance properly, it is difficult to design a forward swept wing that is not structurally divergent at a reasonable weight. It is possible to do so using modern structural analysis techniques and composite materials, as was proven by the Grumman X-29 research airplane.

An intermediate case that has caused trouble with wings in the past is one where the aerodynamic center is forward of the elastic axis and the wing is not divergent in twist, but can twist enough to cause a significant change in the spanwise distribution of lift and increase the load near the tips.

When the pilot increases angle of attack to pull up or turn, the tips of the wing twist leading-edge-up due to the additional load caused by the initial angle of attack increase. This has two effects. First, it increases the lift by more than the original, commanded angle of attack change caused. Second, and more importantly, the majority of this additional lift is near the tips. This additional lift outboard moves the centroid of the lift outboard, and increases the bending moment on the wingspars over what it was designed for. The twist also imposes additional loads on the spars. The result of all of this is that the wing will hit its structural limits at a lower load factor than it was designed to withstand. 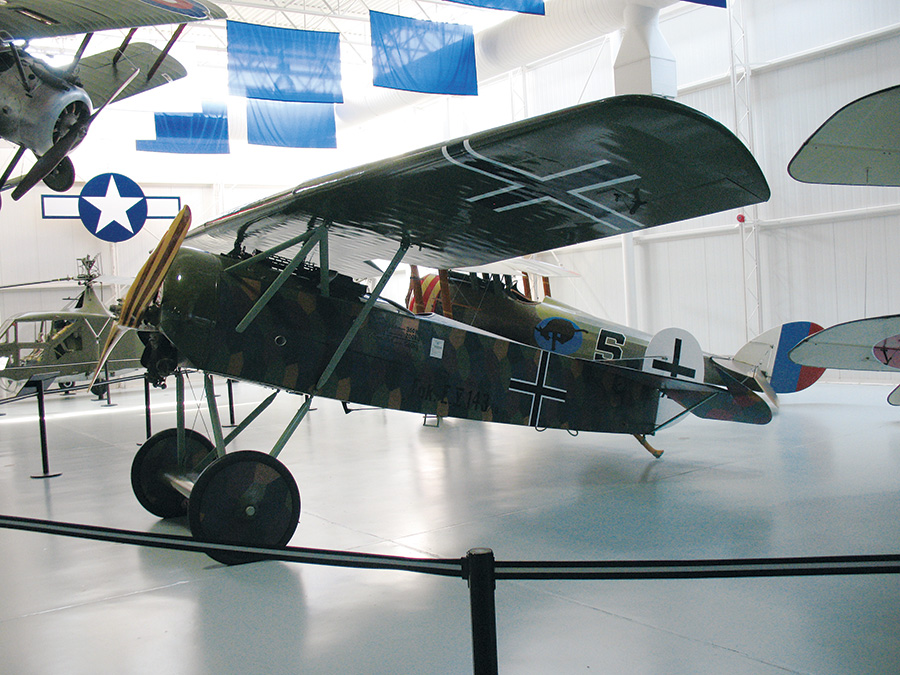 The D.VIII story is a classic in aircraft structural design—beefing up structure is not always a good thing when it comes to aeroelasticity considerations.

The Dangers of “Beefing it Up”

Ironically, this problem can be caused by a misguided attempt to make a wing stronger. An early instance of this occurred on the Fokker D.VIII fighter, introduced near the end of WW-I. The D.VIII was a monoplane with a parasol-mounted cantilever wing. The prototype D.VIII passed structural proof loading tests on the ground and exhibited no structural problems in flight test.

When the D.VIII entered service, there were a series of wing failures in pull-ups from high-speed dives. To determine what was wrong, Fokker repeated the structural proof load testing that had been done on the prototype with a production wing. The production wing successfully carried the load when loaded with sandbags the same way as the prototype wing. This loading represented the expected spanwise distribution of lift at the maximum load factor for the airplane. What Fokker noticed during the proof test was that, unlike the prototype wing, the production wing twisted leading-edge-up at the tips under load. The extra bending moment caused by the twist moving lift outboard was what was causing the wings to fail.

Clearly, there was a difference between the prototype wing and the production wing that was causing the problem. The D.VIII wing was a two-spar design. It turned out that the German military authorities had been concerned that the rear spar looked too weak relative to the front spar, and had insisted that Fokker beef up the rear spar on the production wing. Unfortunately, this stiffened the rear spar significantly, so that it wanted to bend less than the front spar under the actual air load. The front spar accordingly bent more than the rear when loaded, causing the tips to rotate leading-edge-up. Strengthening the rear spar actually made the whole wing structure weaker in flight.

The story of the D.VIII is a cautionary tale for anyone who wants to make an airplane stronger. We often read of homebuilders “beefing up” components of their airplanes during construction. They do so in the belief that they are making the airplane stronger and able to withstand higher loads in flight. Sometimes this works, but often it just adds unnecessary weight. What the Fokker D.VIII story tells us is that arbitrarily strengthening structural elements can sometimes cause aeroelastic effects that cause structural failures, rather than prevent them.

Amy Laboda - September 18, 2008
0
You like to think that once you're finished building, those deliriously long cross-country flights you've been craving are near at hand. Enter the DAR, who may or may not agree with that premise. Columnist Amy Laboda and her husband were just such eager beavers, but they soon learned (somewhat reluctantly) that there's value in listening to the voice of experience.

Marc Cook - May 31, 2021
1
Sometimes, when using shorthand in our conversations about Experimental aviation, we use the term...