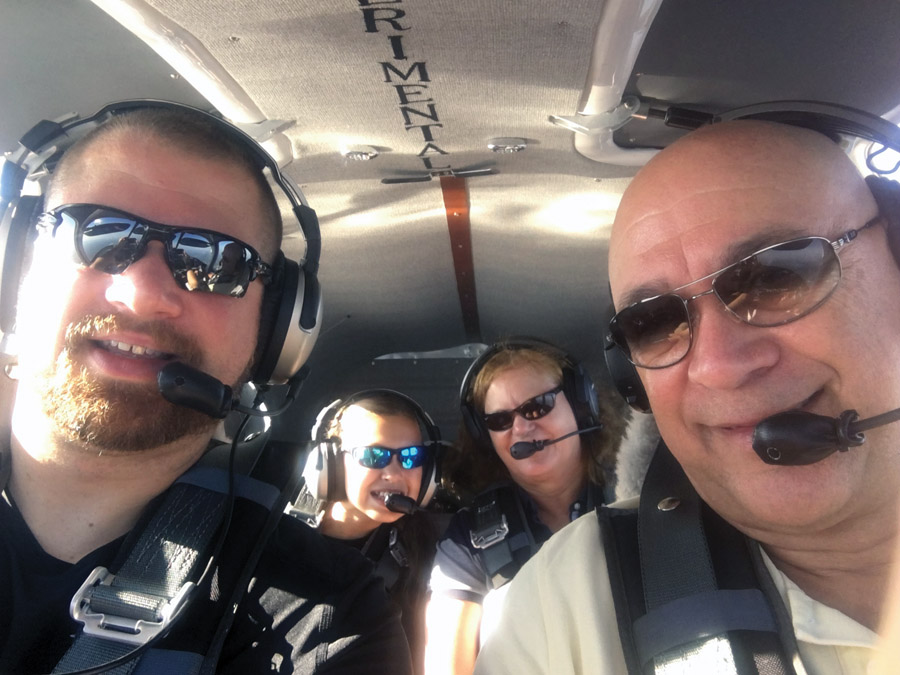 Everyone had high expectations for viewing the total eclipse. The weather was cooperating, the ride was smooth and cool, and the views were amazing.

I’m sure many of you in the U.S. were looking forward to seeing the total eclipse this past August. It had been hyped enough for the last year, and why not? It’s the first one to completely cross the United States in 100 years, and it certainly put a lot of small towns in the spotlight if they were in the path of totality. For non-aviators who were not in the path of totality, there were a lot of choices, from road trips to chartered jets. But for those of us who had access to general aviation airplanes, as I suspect many of our readers do, the choices of locations were actually thinning out as the date approached. Many airports were filled to capacity with reservations. I don’t know this for sure, but I would bet there were more general aviation movements for this event than for Oshkosh. In some locations where the cloud cover prevented a view from the ground, many pilots took to the skies, and the numbers of targets displayed on ADS-B cockpit screens were absolutely amazing.

Like many of you, we planned this trip for quite a while. We were scheduled to fly with our friends from the Falcon RV Squadron over to a really active general aviation airport east of Atlanta near Columbia, South Carolina—KCUB. The airport operators were providing lunch and eclipse glasses. Our son and 10-year-old granddaughter also wanted to go with us. What a neat field trip for a 10 year old, huh? That put a little pressure on me, of course, to make sure this all worked out OK.

So, just like every other trip, I started watching the weather forecasts during the week leading up to the trip, checking

forecasts against actual reported weather. Luckily, there were no large weather systems impacting the Southeast. It was going to be a pretty decent VFR day, and optimism was high for seeing the eclipse. However, on the day prior to the trip, some of the forecasts started showing more broken coverage than I really wanted to see. So, I started calling around for some options, trying to find airports that were located more northwest of Atlanta, as it appeared that skies were forecasted to have less cloud coverage to the north and west along the path of totality. To a T, everyone I called either knew they were going to be packed and out of ramp space, or were on a first-come, first-served basis. Crossville, Tennessee, was not taking reservations, seemed to have a lot of ramp space, and asked if I could park on the grass if needed. You bet! 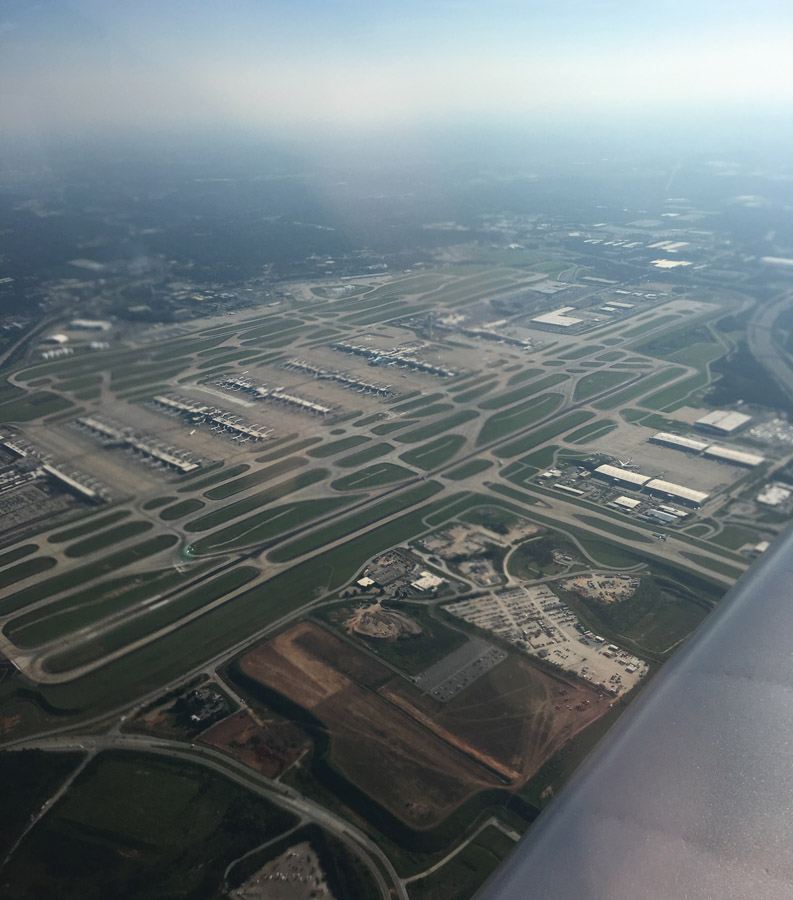 The VFR corridor over the top of Atlanta presents a wonderful view of the busiest airport in the world. It is especially exciting for a 10 year old!

On the day of departure, the forecasts for the planned destination of KCUB showed broken ceilings at 7000 and 9000 feet. To me, that did not present great odds for viewing. I made the call to fly to our alternate, Crossville, which was forecasted to be clear all day. So off we went and had a beautiful flight up to Crossville under clear, but somewhat hazy, skies. Not bad for August in the Southeast. There was a pretty good-sized crowd already there by the time we landed, which was 9 a.m. local, a full three hours before the eclipse even began. It was a lot of fun watching all of the other airplanes land, almost like a mini Oshkosh! We counted over 80 airplanes, including two G5s, so we were feeling pretty good about our choice. We met an RV-14 builder from Chicago, as well as a pilot who flew down from Canada. (As a side note, there sure must be a lot of RV-14 building going on in Chicago, as it seemed like half of the builders I met at OSH were building a 14 there!) From the looks of the ramp, it was evident that GA is alive and well, and certainly capable of mobilizing for an event. Keep in mind that this was a Monday, not a weekend fly-in. The sheer amount of cameras and telescopes mounted on tripods showed that there were some serious astronomers in the group, too.

For about two hours we were sitting under really nice clear-blue skies. Then, about the time the moon started its path across the sun, some scattered clouds started to move in, every once in a while blocking the view for a tiny bit. It was just enough to tease us and convince us that everything was going to be OK. But then it happened. About 10 minutes prior to totality, a cloud blocked the sun enough such that it was pretty clear we might miss the actual event. There wasn’t enough time to get airborne, so we stayed put on the ground. We looked to the northwest and could see the clouds darken very quickly as the shadow approached our location. It didn’t get as dark as we were lead to believe it would, but the runway lights and beacon did come on. It was neat in its own way, but still a disappointment for us. The only consolation was that at least 80 other pilots also thought it was a good spot. We managed to get airborne right after totality and, of course, quickly climbed above the scattered layer. Our granddaughter had a good seat on the right side of the airplane to continue watching the eclipse. 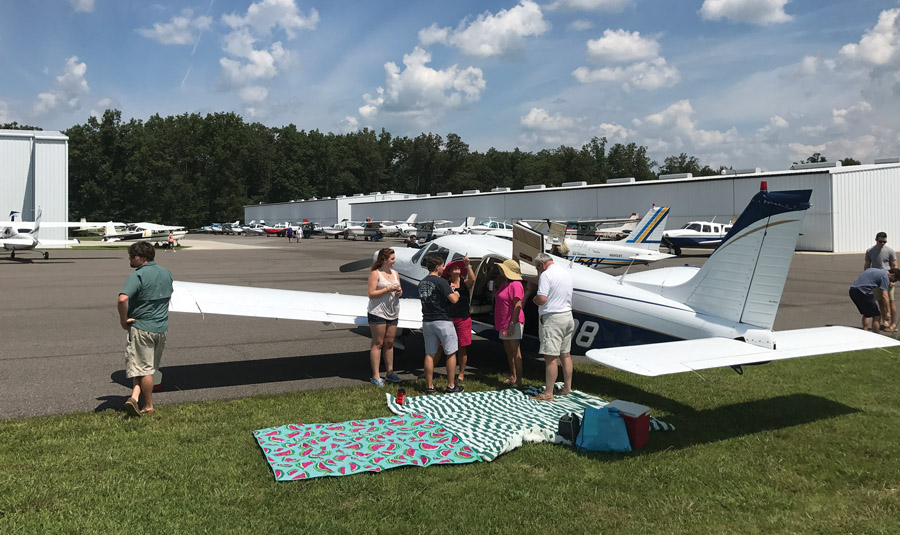 Midway through the morning, the ramp was really filling up. The ground crew did a superb job of marshaling airplanes to parking or fuel. The line for fuel was over an hour long, as they maintained their cheap fuel prices for the event.

After the eclipse while on the way home, I noticed more VFR targets than I am used to seeing on the ADS-B. We really made sure we were focused outside the cockpit to look for other airplanes. Luckily, we had departed soon after totality and were able to get into the ATC system for flight following.

Very soon thereafter it was clear ATC was getting overloaded, as we heard them refusing flight following. Even when we arrived back in Atlanta, ATC initially refused the request for over the top, a rarity. Soon after making a 90-degree turn to avoid the Class B airspace, a different controller gave us a new heading with a clearance into the Class B for over-the-top routing. Over the top is much more enjoyable in Atlanta in August, as it keeps you out of the heat and bumps down low, and provides a really nice view of downtown Atlanta and the Atlanta Hartsfield airport. It was a nice touch for my passengers, seeing as the planned highlight of the day didn’t work out as planned.

As it turned out, our friends who flew to KCUB did get to see the total eclipse in its entirety. The clouds there had a nice break in them right over the airport at the right time. Lucky for them.

It was interesting looking back on this trip. In the 40+ years I’ve been flying, I’ve tried to make the trips enjoyable for everyone. (I think it has worked because they all still fly with me!) The difference for this trip was that the usual routine is to study the forecasts for ceilings, winds aloft, and turbulence. I don’t think I’ve ever paid attention to the cloud cover forecasts for the time after we’ve landed, except when headed to the beach. Even then, it is just to make sure we aren’t going to get rained out. By past measures this trip was a success, as we had a great flight, everyone was comfortable, and we departed and arrived home on schedule. We just missed the big event.

So now what? Well, the first thing we did when we got home was to put April 8, 2024 on our calendars, as that is the next big eclipse in the U.S. We might have missed the event, but the trip was fun, and it was fun meeting other pilots and builders at Crossville.

That’s why we do this—for the fun of it! 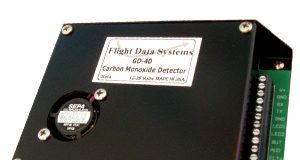