So here it is, January 1, 2018 as I write this, and by the time you read it, winter most likely will be over, and all of the revelry of bringing in another New Year will have been long forgotten. Every year I tell myself to write the New Year’s column in August so it makes the January issue, but I have yet to be successful at it. Some consolation comes from the fact that many of you in the Northern Hemisphere will still be cold and tucked away inside during April, and perhaps there is even a stray ornament from the holidays left out on a shelf to remind you of the new year.

I have never been one for New Year’s resolutions, as they just seem like a fad for a month. However, I am thinking that some resolutions as they pertain to the building of amateur-built aircraft might not be such a bad idea. By now those of you who have been reading my columns over the years know I have a few special pet peeves that I continue to find when inspecting airplanes. During the course of the 10+ years I’ve been inspecting airplanes, I’ve noticed that the same things do tend to keep cropping up. Now I have to tell you that I have had the opportunity to inspect some absolutely gorgeous specimens of aircraft that even I drooled over. Yet, on even the best ones, I still found at least one of the three most common discrepancies. 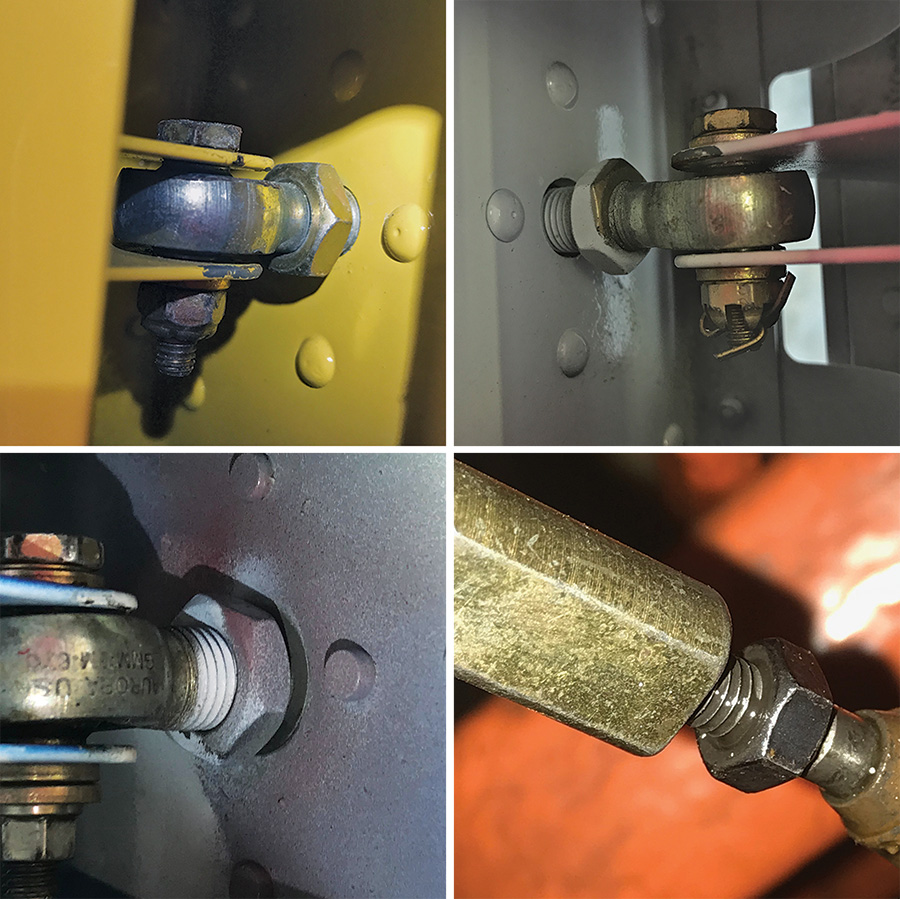 These were all discovered on different aircraft during the last three months of 2017. In some cases you can see the jam nut was never tightened, as there is no scoring of the paint. In a couple of cases the jam nut was never installed, one of which was on the throttle linkage at the carburetor. Loose or missing jam nuts on spar surfaces can cause cracking of the spar over time, as the load is not properly distributed.

The most recent one occurred while inspecting a nearly perfect RV-7A in North Carolina. I had a wonderfully smooth morning flight up to the destination airport and happened to notice that I passed directly over Clemson University and the stadium of the Tigers while en route. The builder was fairly young, perhaps mid-30s, and the airplane was beautifully painted in Clemson colors, with a tiger decal on the tail. Sure enough, he was an engineering graduate from Clemson, and his attention to detail was impeccable. The paperwork was flawless, and the engine compartment was a work of art. Even the engine was painted orange! For the first time, I really couldn’t find anything wrong anywhere firewall forward. So I kept looking. Still nothing. I finally moved on to the rest of the airplane, and as I continued around the airplane looking at the outstanding workmanship, I began thinking that perhaps I am going to see a perfect airplane today! In my own mind, I even began rooting for him.

I really like it when I see the use of torque seal on nuts, fasteners, and jam nuts, and I was seeing it everywhere on this airplane. Even the left elevator and rudder jam nuts were torque sealed. But then it happened. There on the right elevator, the right jam nut was loose! How could it be? I almost wished I had a wrench in my pocket so I could tighten it and just move on. It was clear to me that he had spent a lot of time on the details to have a perfect airplane. We both laughed, and I showed him that I didn’t have a wrench in my hand to loosen it. His reaction was not what I expected. He said it was the reason I was there to inspect his airplane and not someone else. He wanted someone who paid as much attention to detail as he did. Truth be told, I still wonder if he left that jam nut loose to see if I would find it.

The underlying question is this: What is it about jam nuts that seem to give builders so much trouble? The worst example I ever discovered was on an RV that had been flying for seven years, and every single jam nut on the elevator attach bearings was loose. In fact they had never been tightened, as there was paint underneath the nuts and no scoring of the paint. Unfortunately, I don’t think I’ve found a single airplane yet without a loose jam nut. I’m thinking we should start a movement, something along the lines of “Just say no to loose jam nuts!” Perhaps it will catch on, and we can eradicate loose jam nuts in the world of amateur built aircraft.

Whenever the bolt is subject to rotation, a castellated nut and cotter key are required. All of these are wrong, and the rudder cables (left) are a common mistake, as seen here. The rear spars of some airplanes, like the RV series (right), are subject to rotation, and the plans call for a castellated nut and cotter key. On many of the ones I see, the proper drilled bolt is installed with a fiber nut!

Discrepancy number 2 has to do with fiber nuts versus castellated nuts and where they are acceptable. The rule of thumb is that if the bolt is subject to rotation, it requires a castellated nut and cotter key. Bolts that go through rod end bearings, such as on flight controls, do not require a castellated nut, as the bolt captures the bearing and the bearing carries the rotational load. However, on things like rudder cables and some control linkages, where the bolt is capturing two or more pieces that have movement, a castellated nut and cotter key are needed. Even the rear wing spars of some airplanes have movement and require a castellated nut. The best thing to do is to refer to the plans for the correct fastener. I’ve come to the conclusion that many of the mistakes having to do with using incorrect fasteners can be attributed to the final assembly of the aircraft taking place at the airport. Usually, most of the construction has been done at home, and a lot of temporary fasteners were used during the initial construction and fitting process. By the time it’s moved to the airport, there can be a false sense of knowledge regarding the proper fastener, and many times the plans are forgotten at home during the move.

I recommend that once the airplane is moved to the hangar and final assembly of the project has begun, every step should be worked to completion with reference to the plans. It’s the only way to ensure that it is assembled properly. By the way, all the pictures of loose/missing jam nuts in this column were from inspections during the last three months of 2017.

Always refer to your operating limitations for the verbiage of the required Phase I completion logbook entry. This one is not acceptable by any means. During the period in which this entry was made, the FAA order specifically stated the required wording, some of which required specific speeds such as VX, VY, and VSO to be documented.

There is also an important statement in the operating limitations that needs to be entered into the aircraft logbook at the completion of Phase I, prior to carrying any passengers or operating outside of the Phase I test area. That statement includes an entry for certain speeds obtained during testing. Just making an entry that says “Phase I completed” is not acceptable. Yes, I have seen that more than once, and in the worst case I inspected an airplane that had been flying for seven years across three different owners with no Phase I signoff in the logbooks.

The second part of the paperwork issues that I see has to do with weight and balance. While all pilots supposedly learned to do a W&B for aircraft when they were learning to fly, it can be a little intimidating to create a W&B from scratch on a new airplane. It’s not an exercise that anyone was trained on, and it can be a little dangerous as well, seeing as the aircraft has to be jacked up and then set on scales in a level attitude. It is then that the fun begins, dropping plumb bobs and taking various measurements to determine the CG of the empty aircraft. This is where I find some builders have a problem, and in some cases have made mistakes that can adversely affect the available CG range and even the flight characteristics of the airplane. 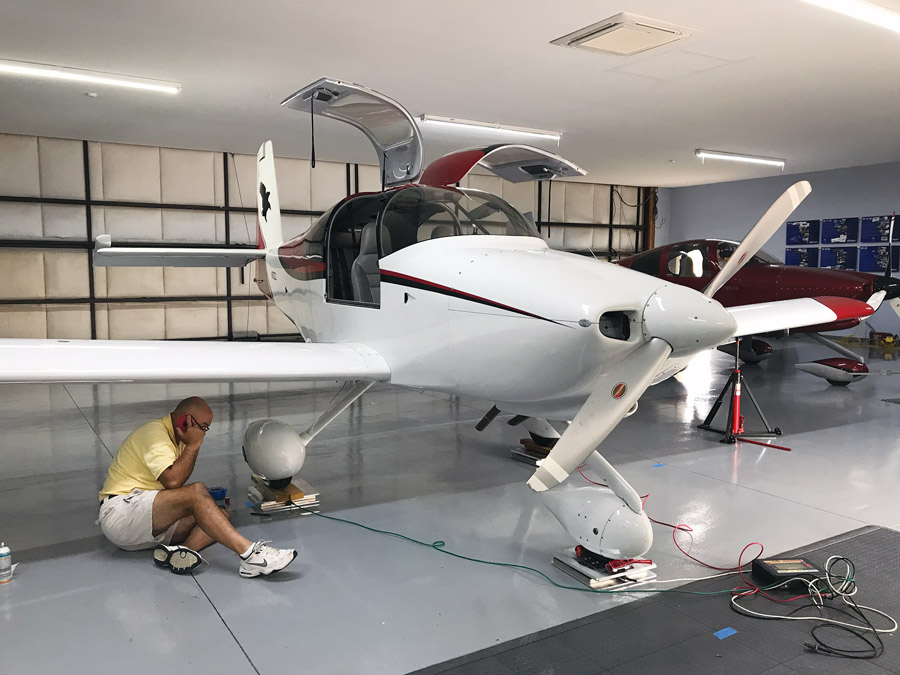 Jacking and leveling the airplane on scales can be dangerous. It should be done in a closed-door environment with some help. Ensure the wheels are chocked once it is up on the scales. 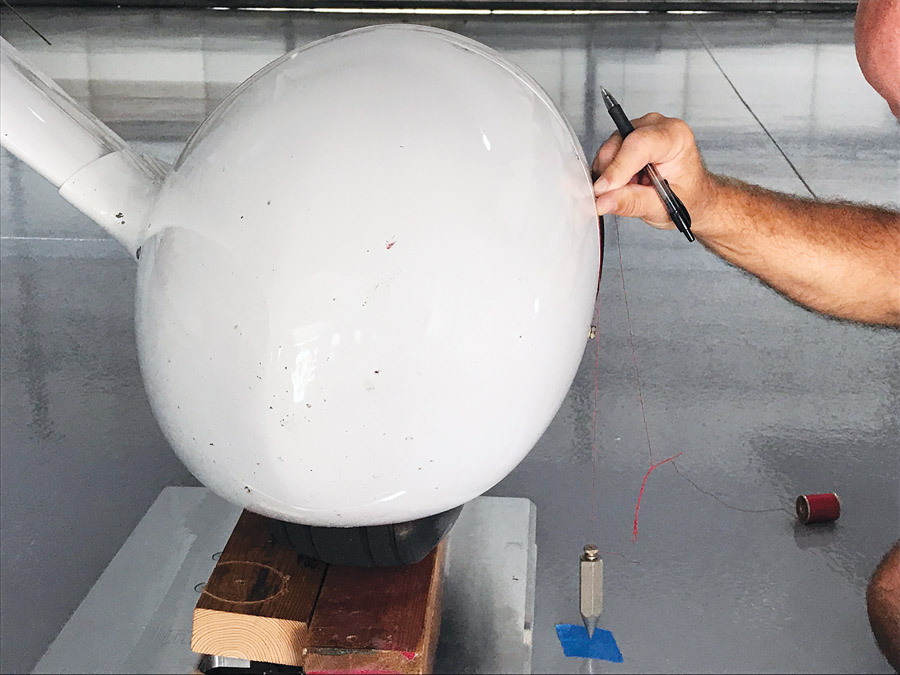 Dropping a plumb bob at various points and taking precise measurements will ensure an accurate empty W&B. The use of painter’s tape on the floor allows for marking the plumb bob drop points, then move the aircraft to take all of the measurements needed for calculation. It’s much safer than working underneath an airplane on scales.

I do enjoy sharing my discoveries with you. It’s very rewarding when I hear back from someone that they caught something on their airplane due to something I wrote about. Even this week, I traded emails with someone on a separate topic, and in passing they mentioned that they discovered something on their condition inspection as a result of one of my columns. Kinda makes it all worthwhile.

So, while I mentioned I don’t believe in New Year’s resolutions, I do strive to improve. For this year I’ve got two things I am going to work on: I am going to get my inspection authorization (IA), as I like to continue to learn. Second, the windshield on my RV-10 is severely crazing, and since we are planning to go back to Alaska this summer, I need to replace it. I am not looking forward to doing it, but I committed to Carol that I would. No sense flying in all of that beautiful scenery trying to look through a crazed windshield. It definitely would affect the fun factor.

Kate O'Connor - April 30, 2021
0
What you need to know when shopping for these Sonex Aircraft models.