There really are some excellent forums at AirVenture, such as the well-organized, humorous presentation by Steve Schultz (of Ion Aircraft) and friends. Saying he loved the excellent Rotax engine but was tired of synching the carburetors (this was before Rotax offered their EFI 912iS), Schultz embarked on replacing the carburetors with a simple fuel injection system.

Self-effacing in the extreme, claiming no training or specialized knowledge, Schultz explained he had nothing to sell and his talk was simply a lab report on how nicely his carbendectomy came out.

The stone-simple Rotec single-point mechanical fuel injection (liberally based on the Allison system) was purchased and fitted to the 912 ULS with $78 worth of custom tubing and flanges. Minor tuning took care of starting and shut downs plus the one and only vapor lock during a taxi test.

And the results? Very good for a backyard effort (supported by CAD and other modern techniques). In short, Steve says his Rotax, “runs like a different engine” and in a good way. It’s much smoother, especially at cruise and has run successfully four years now lean of peak for an overall 15 percent reduction in fuel consumption. Weight was reduced 3.25 lb, the EGT spread tightened and carb fiddling banished. Even the engine shut down is noticeably gentler (he doesn’t worry about cracking welds during shut off anymore!).

Steve was quick to admit the central fuel injection did not make any more power at full throttle (expected and perfectly normal), leaving the reduced fuel burn the practical plus. Bonuses are CHT’s cooler by about 75 F and EGT’s once 150 F apart are now separated more like 50 F.

Lessons learned are to keep the fuel regulator cool to avoid vapor lock and the stock Rotax carbs poorly serve an otherwise excellent engine. Also, the Rotax does run lean of peak, contrary to some opinions.

The conversion was done in 2011 and now has 175 hours on it. Again, Steve is offering information only and has nothing to sell other than a genuine dedication to furthering general aviation where he can. 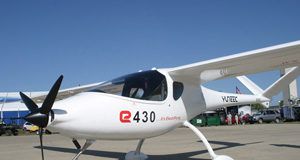 Marc Cook - October 7, 2009
0
Editor-in-Chief Marc Cook reflects on the past years celebration of KITPLANES first quarter century, and finds that predictions for the next 25 years don't come easily.