Let me say this right up front and get it over with: There are things in any kit aircraft that are worth changing out, even right out of the box before you build it. Spend a bit of time on the listservs and forums online for any kit aircraft that has been in the market for a few years—and for which at least 100 kits are out there, actively constructed or flying—and you will discover that builders have uncovered weaknesses or quality issues in the kit components and devised fixes or improvements to address these issues. That’s pretty natural.

The more detailed your builder book is, the better. Be sure to include diagrams so you can refer to how you actually wired something; don’t rely on memory to recall how you think you did it.

If you are an RV-10 builder, for instance, you’ll want to wander over to www.MyRV10.com and spend a little time studying Tim Olson’s list of the top 10 fixes he has made to his project. He’ll even tell you why he did it, and if you dig deeper on the web site, you’re liable to find a treatise on how.

We (my husband and I) have studied much of what Olson and other early builders of RV-10s did, and made many of those “corrections” in our own aircraft. Our door latches are improved, our nosewheel has been modified, as was our airbox; and our cowl, although different than Olson’s, sports the cam-lock system, versus the stock piano-hinge system for closure.

That’s just a sampling of changes builders have made to original factory equipment on this one kit. Lurk on those forums, search out builder web sites, or better yet, get to know some of the more renowned builders in any group and you’ll save yourself a little heartbreak in your own project, no questions asked.

Now that I’ve established where I stand on fixes, let’s talk about major changes that can be more problematic. I’ll localize to my own two homebuilts, a Kitfox IV and an early serial number RV-10 quickbuild. However, feel free to expand on my tangent and do your own research on just about any established kit aircraft. In fact, I encourage you to do as I did and spend some time in the NTSB’s accident files (www.ntsb.gov) for the aircraft model you’re interested in or are currently building or modifying. It’s an eye-opening educational experience. Any deviation from the kit manufacturer’s engineering specs puts you in the realm of test pilot, and one look at the NTSB annals will show you that far too many unwitting test pilots and their homebuilt machines meet with unexpected and undesirable consequences.

So, unless you’re an aircraft structural engineer, don’t make structural changes to your kit without seeing the engineering from the manufacturer of the mod. And if you do decide to go with a mod or upgrade, as we did when we changed out the original bungee-cord landing gear on our 20-year-old Kitfox IV for spring aluminum Grove landing gear, install the mod per the manufacturer’s recommendations and then put the aircraft back into test mode, as the regulations require you do for any major modifications. We did, and the results were predictable and repeatable. We like the new landing gear; it’s more rugged than the factory original gear.

You might, however, discover that some mods don’t pan out as the big improvements that you and other builders like you were hoping for. We were hoping for a speed bump when we went with a different cowl; what we got was a challenge to keep the engine cool in a manner that most RV-10 builders who adhered to stock did not. That left us working with the mod manufacturer for a couple of years. To his credit, he stuck with us and helped us with the engineering conundrum to solve the issue.

Are you considering a non-standard engine installation? We were among the first to mount a Jabiru 2200 onto a Kitfox airframe. What looked like a three-week swap-out ultimately required refabrication of the cowling, a plenum and a lot of research and experimentation to discover the best propeller for the installation. It took two years of trial and error, including two props, to get it running the way we had originally expected it to run. To our credit, we were extremely conservative, and as a reward, we never had a power failure.

Not everyone who re-engines their homebuilt is that methodical, unfortunately. Check NTSB records or pick up AOPA’s Joseph T. Nall Report and look under homebuilts. Automobile engines converted for aviation use are particularly singled out for their problems. I’m not against innovation by any means. I just want builders to fully understand what they are signing up for when they jump on the modification and improvement bandwagon.

OK, so you’ve read this and decided to stick with mostly stock on your kit, improving only that which clearly needs it, and for which there are established tried and true structural and powerplant fixes.

Excellent; don’t stop there. The internals of your airplane, and I’m talking avionics, are just as critical as the externals. You don’t want to deviate from the norm unless, again, your background is in avionics, electrical and computer engineering, and you are working closely with the equipment manufacturer as, well, an alpha-tester. (Anymore, we are all beta-testers, I think). 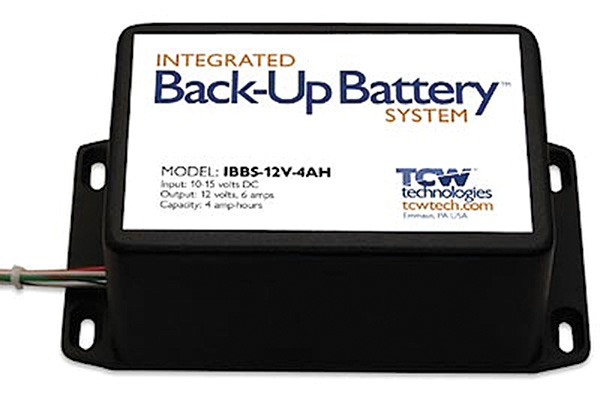 TCW’s integrated nickel-metal hydride backup is good belt-and-suspenders redundancy. But make sure you wire it right.

Case in point: we have an all-electric airplane, for all practical purposes. Yes, we do have a pitot-static system, but we do not have a vacuum system to power any backup instrumentation.

We need electricity if we are in a cloud and want to pop out the other side safely. And we do fly in clouds. So, we looked for redundancy when we were building. OK, my builder was a Boeing driver in his youth. We built in triple redundancy. Yeah, there was weight involved. We sacrificed a fancy interior and a bit of soundproofing to compensate, go figure.

Our first line of defense against electrical failure is a backup B&C alternator, and it requires just the flip of one guarded switch to kick it on. Our second line of defense for a couple of years was the aircraft battery, which was wired to an emergency or essential buss (e-buss) that contained just a few key components of the system, including EFIS 1, GPS 1, and trim.

Then TCW Technologies came out with a nickel-metal hydride backup battery for all-electric kit aircraft that was light enough and bulletproof enough to meet our specs. We added it as our third line of defense, inserting it in the system in such a way that it would automatically pick up the load of the e-buss without the pilot needing to flip a guarded switch. Of course, just in case the pilot wanted to turn off the master and push up a red guard and flip a big, knobby switch we put one in there for him. (Boeing driver, remember?) That was not, however, the way TCW’s wiring diagrams are laid out.

TCW’s wiring has you flipping its backup battery on before the master switch, and leaving it on (which is the armed position during normal flight) throughout normal or abnormal operations. The Boeing driver (otherwise known as my builder) really likes red guards over emergency operation switches, and the idea of having one up during normal flight was bothersome.

He created a different system, with what he describes as an on/on switch. Yes, he still turns the backup battery on during his preflight checklist to be sure it is functioning, but then he returns the switch to the down position, with the guard down. The way it’s wired, once the master switch comes on, the battery condition becomes armed with the switch in the down position.

If you select the up position with the master switch on, it will actually disarm the backup battery, just in case you ever felt the need to do that. For just a little extra protection, he inserted a 10-amp fuse between the battery backup, which is located in the aft section of the aircraft, and the e-buss it was attached to, located up front. Yes, the battery backup has its own fuse, but you never know, and where is the harm in just a little more redundancy, he thought?

Well, the wiring was just different enough from the way TCW suggests it be done that the builder probably should have drawn himself a detailed picture and tucked it in with the aircraft’s plans, because two years later, he went to check the backup and saw nothing—it appeared the nickel-metal hydride had taken and exhausted its last charge.

He sent it off to TCW for a bench check and was surprised when Bob Newman, president at TCW called him and told him the battery checked out fine. A little sleuthing was in order. It didn’t take long to uncover the burnt 10-amp fuse, which was the real culprit in the backup failure. Yep, sending the battery in for a check-up turned out to be a $50 solution to a 50-cent problem. (To his credit, Newman charged only for shipping, and did recondition the battery backup before sending it back.)

The moral to that little tale? Redundancy is fine, but rethinking your wiring should really only be done if you are willing to make detailed diagrams, or at least take photos of what you’ve rewired. Then tuck it into your well-organized builder book. (You do have a builder book, right?)

You’d better have a builder’s book or its digital equivalent. Even if you bought your homebuilt—demand one. That book is essentially the blueprints and only maintenance manual you’ll have. You can’t really go generic on a homebuilt because even if yours is serial number 250 out of 2000, each machine in a kit manufacturer’s line up has been hand assembled, and I can assure you, customized somehow or another.

It’s critical for you, the owner, to have access to diagrams and photos of where every wire attaches, every hose clamps on, and just as important, to have a comprehensive equipment list. That list, those diagrams, are your treasure maps, your troubleshooting guide anytime you have equipment issues, be they annoyingly intermittent or immediate reasons for grounding your bird and having it repaired.

Just remember this: Every homebuilt aircraft is unique. That’s the beauty of the category. But with great beauty comes the responsibility of documenting your baby’s every nook and cranny. Consider it a labor of love, just like every rivet you bucked and wire you crimped. Every page of that documentation will one day save you hours—and dollars. Think of it this way: Someday in the future, you’ll be looking through that documentation and thanking yourself for being thorough.