I guess I learned basic navigation back in my Boy Scout days. As a young lad, I learned to get from point A to Point B using a map and my eyes (we’d call that pilotage) as well as a compass and counted paces (the equivalent of ded reckoning). I moved on to navigating via roadmap, nautical chart, and aeronautical chart soon after that, always remembering that if you knew where you started and how you had moved, then you must know where you are.

Aeronautical navigation has progressed in much the same fashion since the days of the Wright brothers. From looking out the windshield (if there was one) to see familiar landmarks, to trusting compass-watch-airspeed, to using fancy electronic aids—aviation navigation has always trended toward more precision, quicker navigational solutions, and more reliability.

Homebuilt aircraft have the same navigation needs as their certified brethren. Depending on the mission, the needs might be more or less complex, but reliably knowing one’s position relative to a departure point or destination is always the goal. Even when we leave the atmosphere and navigate in outer space, our navigational needs boil down to that same thing—figuring out where in the world (or the universe) you really are.

We are living in a magical time. Arthur C. Clarke once said that “Any sufficiently advanced technology is indistinguishable from magic,” and relative to navigational technology, he hit the nail on the head. Today’s GPS would appear no less than magic to a navigator from the days of sailing vessels—and probably to our much-more-recent ancestors steering aircraft across the vast oceans in WW-II. To tell them as they struggled with maps, charts, circular slide rule and sextant that all you need to do is press a button and follow the magenta line—they’d consider you to be Merlin if they believed you at all. To be able to pinpoint your position anywhere on the planet with an accuracy of a few feet is, in fact, magic to anyone born much before 1950.

As we build our own airplanes, we are faced with numerous choices. If we winnow away the choice of airframe and engine, the third major expense for many is the instrument panel and avionics. When it comes to navigational information, we have numerous options ranging from that old-fashioned pilotage (looking out the window) to VORs, NDBs, and—yes—the magical box known as GPS. For a historically brief time, we could choose a LORAN receiver, but alas, that has gone the way of the low-frequency range, airway lights, and the rapidly dwindling number of non-directional beacons. But given that GPS receivers are practically being given away in cereal boxes (take a look at your cellular telephone—it probably can tell you exactly where you are right now!), we have to ask the question, “Why would you install anything else?” 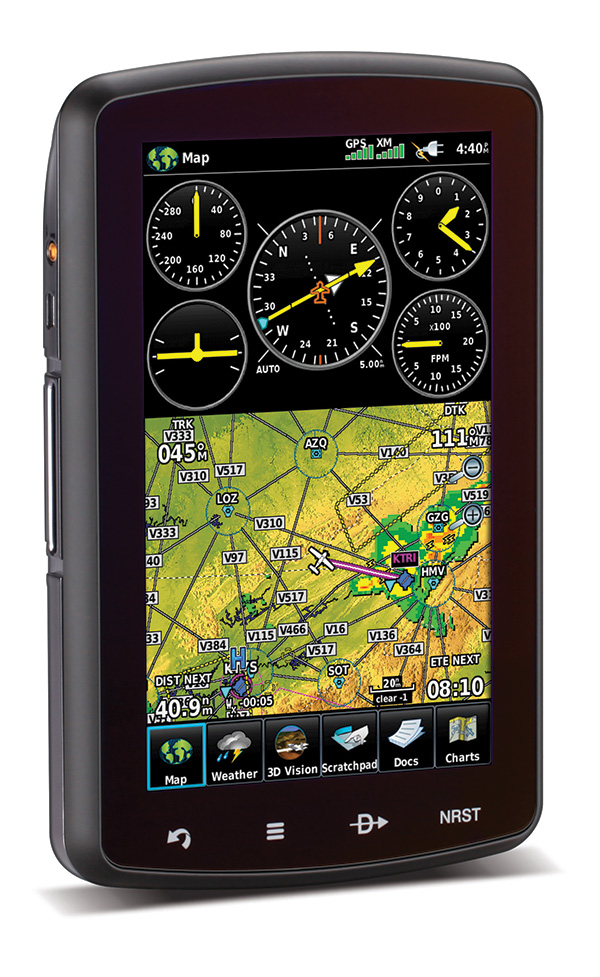 Follow the magenta line—Imagine telling pilots from long ago that instead of struggling with maps, charts, circular slide rule or sextant, navigation in the 21st century is as easy as pressing a button and following a line on a GPS display.

It’s a good question—and one being answered by many pilots today with a shrug and a hearty “I wouldn’t!” A lot depends on how you are going to use your airplane, of course. A day-VFR flight requires little more than looking out that window. But for the modest price of a handheld GPS, you can reliably tell the world that you are “7.7 miles southeast of the field” on your inbound radio call. If you are flying IFR, you will probably be looking at a certified GPS navigation box installed in your panel—at least if you want to fully utilize the system as it works today. ADF approaches are rapidly being decommissioned, as are ILS approaches at many smaller airports. GPS overlays with vertical navigation exist for most airports, and the intent of the FAA appears to be to change “most” to “all” in very short order. GPS approaches allow the government to do away with expensive and finicky ground stations and the people who build and maintain them.

Let’s not forget that GPS enables all sorts of benefits when it comes to cockpit situational awareness, such as moving maps and synthetic terrain. For those operating in the mountainous west, the advantages to modern navigation methods include marvelous safety enhancements. Knowing where you are relative to, well, anything is information that generations of older pilots would have given anything to understand. No matter how much they might argue that “you need to be able to use that VOR (or NDB, or low-frequency range!),” it is hard to beat an actual picture of your situation—and modern magic has given us that option.

ADS-B and Next Gen are totally reliant on the GPS system—and that is true whether you are flying a homebuilt or a big Boeing. We can argue about if that is reckless or not, but the truth is that GPS receivers are extremely reliable, and the constellation of GPS satellites and their associated ground stations—well, they aren’t bomb-proof, but then again, neither are VORs or ILS stations. Yes, the government likes to fiddle around with GPS spoofing in the great western expanses of the United States, but will they be allowed to do that when American, Southwest, United, and Jet Blue are forced to fully rely on the system for the safe delivery of the general public to their destinations? I think there will be some serious discussions about that when the public realizes that all of our eggs are in that (extremely reliable) basket.

So what about backup navigation? For VFR flight, there is always that wonderful window, a map in your hands (or, if you choose, on your iPad). For IFR navigation, it is probably prudent to keep a VOR receiver for at least a little while longer—although I know of pilots who state that their GPS backup under IFR conditions is radar vectors and a GCA (ground-controlled approach) at their destination—and believe it or not, an argument can be made that this is legal (imagine your com radio being a backup navigational tool!).

So, as you lay out that wonderful instrument panel, take a look at what is available today and what is coming in the near future before you make your choices. Make those choices based on your realistic needs—not on old wives’ tales or what used to be the norm. Have a reasonable backup to make sure you can get down somewhere safely, and build the panel that you need, not just what others think you should have.