This is not the editorial we expected you to see this month—and the reason is tragic. Just as we were going to press, we learned of the deaths of Jeremy Monnett, CEO of Sonex Aircraft, LLC, and Mike Clark, a Sonex assembly mechanic.

Jeremy and Mike were flying in Sonex Sport Acro N123SX, which had recently been fitted with a 100 hp AeroVee Turbo. The crash occurred on June 2 near Witt-man Regional Airport in Oshkosh, Wisconsin. We don’t know the cause of the crash, and probably won’t for some time. But the loss of two members of the kit industry saddens us all. 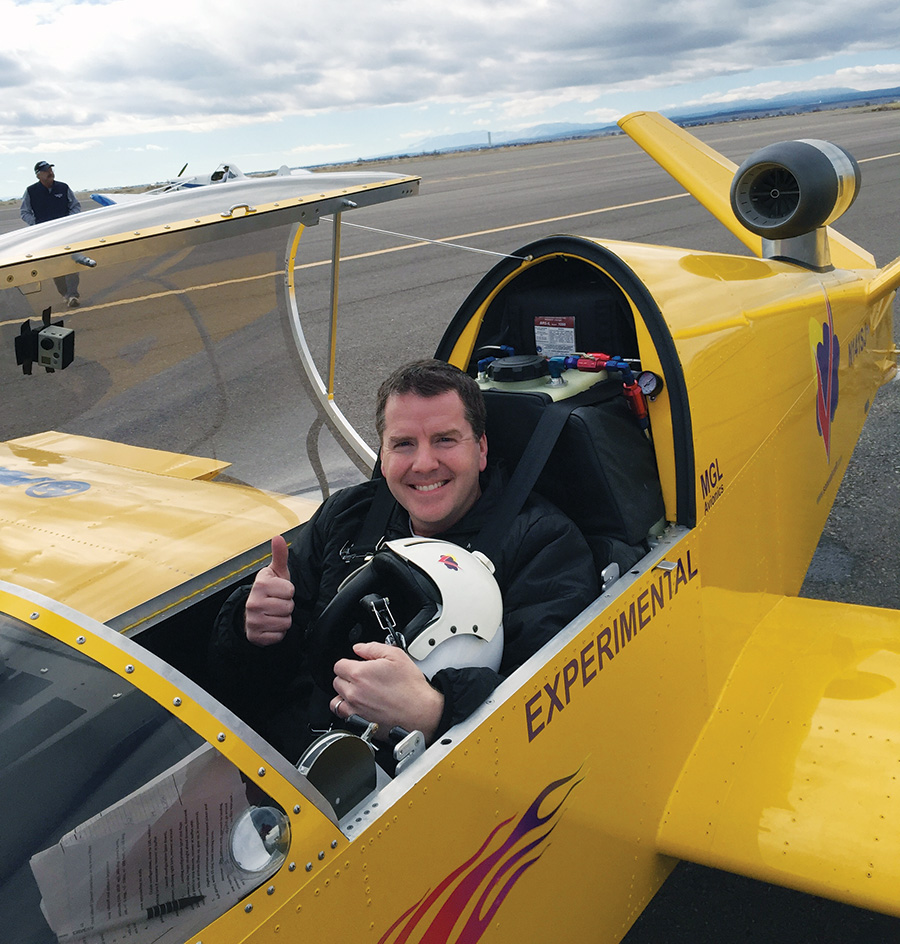 Jeremy Monnett—CEO, husband, father, and pilot—after his first flight in the SubSonex.

I first met Jeremy two years ago, the first time I went to AirVenture as editor in chief. He impressed me as an energetic and committed evangelist for affordable sport flying, just like his father, Sonex Aircraft founder John Monnett. As then-vice president of the Aircraft Kit Industry Association (AKIA), he worked tirelessly to coordinate the various leaders of our industry to bring consensus on important topics such as transition training. His work on this and other topics brought him respect within AKIA, and last year, he was elected president of the association. Running an organization made up of some of the top names in homebuilding is a bit like herding cats—but Jeremy was a good listener and had the ability to see multiple sides of any issue and work toward the best solution to problems.

Last year, I spent two days at Sonex, going through their T-Flight program and flying a number of Sonex aircraft. Jeremy was in constant motion, busy running the company and seeing that development, production, and kit orders all went smoothly—yet he took the time to check in with me several times each day to make sure that I was not just getting the material that I needed, but was having a good time as well. We talked about the various airplanes available at Sonex, about the many types of flying I enjoy (including soaring), and he encouraged me to take the Xenos motor glider for a flight—I wonder if he knew then that I would enjoy it enough to order a kit for myself and my wife a month later.

But aside from the energy he put into aviation, what really impressed me was that as busy as he was, he took time to enjoy his own wife and children when they came out to the airport in the afternoon. As Joe Norris, Sonex chief flight instructor, and I taxied back in with the Xenos, Jeremy was playing with the kids on the ramp—as excited about his role as a father as he was in his role as company executive and pilot. Sonex is clearly a family affair, and anyone on the grounds is part of the family—a family now saddened by the loss of two of its members.

Jeremy commented that although he grew up with a father devoted to homebuilding and kits, he himself came to aviation later in life. I suspect that his early exposure created a spark, a spark that took a few years to ignite. But he made up for the late start by flying a wide variety of airplanes and obtaining ratings in sail and seaplanes—and he recently added the jet SubSonex to his resume. He admitted to me that while the jet was his father’s dream, he was at first reluctant to make it part of the Sonex Aircraft product line. But once he embraced the idea—and experienced the thrill—he was committed to it without reservation. I can’t think of the SubSonex without thinking of both John and Jeremy.

Aviation can be a harsh mistress—it takes those we admire and respect unexpectedly. I have lost many friends and co-workers in my life among the clouds, and it never, ever gets any easier. I never saw Jeremy without a grin, but I was afraid that his face would rupture when I saw the video of his first personal jet flight—he was clearly a happy young man enjoying the freedom of flight that day. It is indeed tragic that his time with his family, with us, and in the air has been cut so short—but his legacy lives on in every Sonex built and flown. Jeremy has truly “slipped the surly bonds of earth, and danced the skies on laughter-silvered wings.”

This issue of KITPLANES is dedicated to the life and memory of Jeremy Monnett—husband, father, son, friend…and pilot.