In last month’s column we looked at the subject of nosewheel liftoff on takeoff. One of the topics covered was the danger of a “hop off” accident during a taxi test if the airplane took off unexpectedly at high speed. Sadly, as I write this, I have recently learned that a well-known ultralight designer/builder and friend died in just such an accident while testing his latest design. At the time of this writing it was not clear if he intended to lift off or not on his final flight, but it was known that he had been having trouble getting the nose to lift, and had made modifications to remedy the situation. He apparently was unable to lower the nose after liftoff, and stalled into the ground. 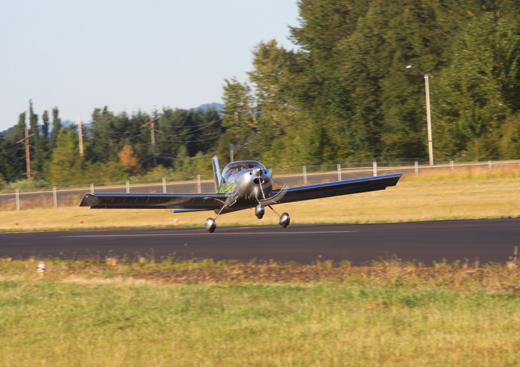 Only after slow taxi tests have been completed (preferably on a taxiway) will operations move to the runway. The pilot should know the expected stall and liftoff speeds.

Contemplating this unfortunate accident made me realize that taxi testing, which is the first testing done with any new airplane, is more important and can be more hazardous than we realize. Accordingly, here are a few thoughts on taxi testing, and taxi-test safety.

Before any new airplane flies, it is taxi tested. Taxi testing starts when an airplane first moves under its own power, and progresses to ever-faster runs down the runway. Nosewheel liftoff, and eventually short hop flights down the runway, follow. At the satisfactory conclusion of the runway hops, the airplane is ready for its first up-and-away flight.

The first slow taxi tests can occur on taxiways instead of the runway. The airplane’s speed should not exceed a fast walking pace during this phase of testing. During slow taxi runs, the pilot tests the brakes and how well the airplane steers on the ground. Slow taxi tests also help shake down the engine installation, since the slow taxi test is probably the longest continuous run of the engine up to that time. The ability of the fuel system to deliver fuel, and the fuel tank venting, is tested for the first time.

Basic engine health, such as oil pressure and the ability of the engine to cool at low speed, is evaluated.

Slow taxi tests also represent the first time the airframe is subjected to vibration induced by the engine. After a period of slow taxi testing, a thorough inspection of the airplane is performed to locate any fasteners or other items that might have been loosened by the vibration. At the same time, the fuel and hydraulic systems are checked for leaks.

Once slow taxi tests are completed, it is time to move testing operations to the runway. It is vital to remember that as soon as the airplane rolls onto the runway, the test is considered a flight test and all appropriate safety precautions must be taken. On every flight-test program I have worked on, both privately and in industry, it is an absolute rule that the airplane does not go onto the runway unless it is physically prepared to fly if necessary. This means that all flight-critical systems are complete and functional. All fasteners are permanent flight hardware (no Clecoes or temporary bolts), and properly safetied. There is sufficient fuel aboard for at least an hour of flight, and all pilot safety and emergency pilot safety gear (parachute, BRS, ejection seat) are fully functional and ready to be used if necessary.

The reason for this set of precautions is that more than one first flight inadvertently occurred during what was supposed to be a taxi test or a hop flight. One common scenario is that the pilot travels too far down the runway, going too fast, and realizes too late that the airplane can’t be stopped before reaching the end. If the airplane is ready for flight, the pilot has the option of taking off rather than damaging the airplane by overrunning the end of the runway. First flights have also occurred when a person or animal appeared on the runway ahead of a fast-taxiing airplane, or one doing a brief hop, and the pilot elected to take off rather than hit the intruder.

Perhaps the most well-known inadvertent first flight was that of the prototype YF-16. During what was intended to be a high-speed taxi test, the airplane got into a diverging lateral oscillation caused by a combination of landing gear dynamics and overly sensitive roll control. When one stabilator hit the ground, pilot Phil Oestricher made the decision to take off and fly the airplane around the pattern. The oscillation damped out as soon as the landing gear left the ground. The airplane landed safely at the end of what came to be known as “flight zero,” and performed its official first flight not too long after.

Before the runway phase of taxi testing, it is also important for the pilot to know what the expected stall and liftoff speeds are. During medium speed testing, airspeed is kept below stall speed so the airplane will not leave the ground.

In the medium speed test phase, the pilot can explore the effectiveness of the aerodynamic controls somewhat by putting pitch and roll inputs into the stick. The rudder will begin to have some effect, allowing the pilot to evaluate the ability of the rudder to control yaw and keep the airplane tracking the centerline.

During medium speed taxi testing, the engine will be run to full, or nearly full power. The pilot will get a sense of how the airplane accelerates, and both the cooling system and fuel system will be stressed a bit more. The pilot can also evaluate the effectiveness of the brakes and the ability to control the airplane directionally during roll out.

As we discussed in more detail last month, one of the most important results from the medium speed taxi series is the speed at which the nosewheel can be lifted off the runway, and the amount of elevator deflection required to rotate. Under no circumstances should the airplane be allowed to exceed its stall speed on the runway until it is established that the pilot can lift the nose at a speed well below liftoff speed. The FAA requires certificated airplanes to be able to lift the nosewheel at 85% of stall speed. While homebuilts and Experimentals are not bound by this regulation, it is a worthwhile guideline for all.

Do not be in a hurry to jump into the air or achieve high speed on the runway. Do not exceed stall speed until you are satisfied with the controllability of your airplane and the ability of the engine to cool down, keep running and deliver enough power to accelerate. A good set of medium speed taxi tests, culminating in several runs with rotation but not liftoff, will go a long way toward minimizing the risk of first flight.

Work up to this gradually; the first liftoff should be brief. As soon as the wheels leave the ground, reduce power and let the airplane settle back down while holding nearly constant attitude. After a few such hops, if all is well, gradually increase altitude and distance down the runway. Once again, resist the urge to hurry, particularly with the prototype of a new design. If the airplane exhibits any unacceptable or unusual characteristics, such as unwillingness to rotate or control difficulty, do not proceed to higher speeds or more aggressive testing until you understand the problem and can either fix it or be sure that it is not a flight safety risk.

A common sequence of events in taxi-test accidents is that the airplane is modified to fix a problem, and the pilot goes right back to high-speed taxi or attempted liftoffs. Sometimes the modification has changed things enough that the airplane does something unexpected or uncontrollable. This has been true in several fatal mishaps involving either an unexpected liftoff or difficulty controlling the airplane during rotation or immediately after liftoff.

If you make any modifications to the airplane to address issues found during taxi tests, particularly high-speed taxi, realize that the modification has changed the airplane enough that the data you have gathered in your medium and high-speed testing no longer applies. After any modification, it is critical to safety that you repeat the sequence of medium-speed taxi runs below stall speed, and then work up gradually to the expected liftoff speed. In this sequence the effect of the modification can be evaluated safely, and any problems it might have caused will be found before resulting in tragedy.

At the conclusion of these tests, you should be reasonably sure your airplane has sufficient power and acceleration to make a successful takeoff. You should also have a good idea of how long the takeoff roll will be, and what the sight picture of a takeoff and landing attitude looks like. Hop flights will confirm that your airplane is sufficiently stable and controllable to safely fly up and away.

A Bit About Blades

Barnaby Wainfan - March 17, 2016
0
Like a wing, a propeller blade is characterized by its area, planform, and airfoil cross section.