As this was being written, we had recently returned from Oshkosh, Wisconsin. What can you say about AirVenture? The book titled 1000 Places to See Before You Die counts the show among its must-see events. For aviation enthusiasts, it’s probably in the top 10. AirVenture is sensory overload in the best and worst ways. From the 100° temps to the roar of jets overhead during the afternoon airshow, to the sudden deluges that send everyone scurrying for cover and vanish as quickly as they materialized, it is a dynamic show. 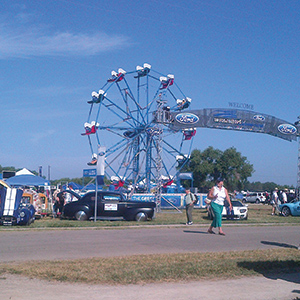 The Ferris wheel, visible from many areas on the main show grounds, was a new addition at AirVenture this year (Photo: Chuck Preston).

It is also a place to experiment and indulge your aviation-related curiosities. If you are a would-be or actual aircraft builder, you can try an airplane on for size, or see what others have done with their designs and evaluate how your own stacks up. You can test-drive the latest avionics to your heart’s content, occasionally in real time. This year I was able to “experience” a ballistic parachute landing in BRS’s simulator. Wobbly as I may have been in the simulator environment, it offered a pretty compelling demonstration of this potentially life-saving equipment. It was an odd sensation, having your forward momentum halted on short final only to find yourself and the airplane sinking, slowly, in a most non-distressing way. Luckily, I avoided a barn.

It’s always good to reconnect, if only for a few minutes, with long-time friends and to make new acquaintances. There’s never enough time to do everything you’d like to, but I guess that’s why people return year after year.

AirVenture is a great place for story-idea generation. In the coming months, we’ll feature some of what we heard about and saw there. It was a big year in avionics for leveraging ADS-B technology (see What’s New, Page 5), and we’ll look at some of these devices in more depth. It has also been a surprisingly good year for new kit aircraft, including the Van’s RV-14 and others, and we’ll feature reviews on several new designs soon.

I would like to thank everyone who extended their hospitality to us at the show, whether through a handshake, a bottle of cold water or a dinner invitation. It’s the sense of community and camaraderie that makes events such as this one special. I owe a debt of gratitude to Amy Laboda for her reporting at the show. Between now and the next one, there should be a lot to talk about in our segment of aviation.

Editor-at-Large Marc Cook has taken leave of KITPLANES®, having accepted the Editor-in-Chief position at Motorcyclist magazine. He’s been trying to make a graceful exit, but found that, as Tony Soprano’s consigliere Silvio Dante liked to say, “Just when I thought I was out, they pulled me back in!” We’ll see a bit more of his work as we publish what remains “in the pipeline.”

Marc deserves recognition for the improvements he made to this magazine during his tenure. We hope to continue in that tradition as we strive to do what we do better.

Once he gets his bearings at Motorcyclist, we hope he’ll come back for a visit or a story now and then when he tires of those infernal motorbikes (not likely). In the meantime, we wish him well.