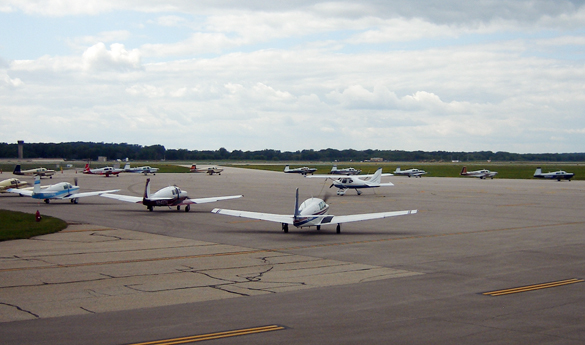 Cook’s Sportsman is ringed by a group of Mooneys, there were 35 in all, that staged their flight to OSH at the Madison, Wisconsin, airport. A group of Glastars departed the next morning. Photo: Jim Dudley 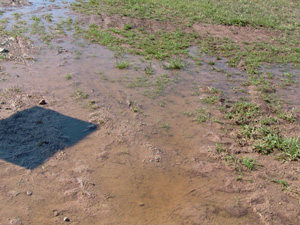 It was going to be one of those years, huh? At the pre-show press conference Sunday night at the Teledyne Continental Motors tent, the rain came down hard. Wind whipped the trees. I glanced toward homebuilt parking and wondered how good my knot-tying was. I wanted to bolt and see if my Sportsman was still upright. (Later, it looked like nothing had come through but a light summer breeze. Phew.)

Monday afternoon, as I was walking back to the Sportsman to retrieve some gear, the skies opened again. But it gave me the opportunity to speak with a gentleman from Mississippi who was actively shopping kit aircraft and had the Glastar/Sportsman on his short list. As we cowered from the rain under the wing, he asked a dozen excellent questions. Every so often, I hear from builders who regret certain decisions, and I tend for forget that most take their investment seriously, carefully researching, thinking long about the choices and, ultimately, doing the right thing.

Oshkoshs new layout helps to disguise a change in exhibitor makeup. With money-burning Eclipse consigned to history, a big chunk of the main drag has opened up, and several kit manufacturers, heretofore relegated to the north-south row of homebuilt makers, have moved into the big house. Whether this signals a change of emphasis for the show or is the result of offers that couldn’t be refused, I don’t know. But it is nice to see kit manufacturers closer to the limelight. Which cannot be said for AOPA. My alma mater (of sorts) has its exhibit space reduced in size and moved well off show center. Its a bit jarring to see the Lycoming tent(s) standing proud without the big yellow AOPA funhouse next to it. 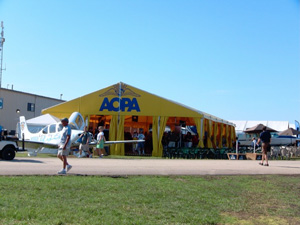 AOPA off the midway. But it’s all change at AirVenture this year, with many vendors moved from their traditional spots.

In the first full day of the show, I had the chance to talk to several vendors, who were still unsure if the turnout was good or bad. Often, it depends on whom you talk to. Lancairs Joe Bartels was found in front of the first piston Evolution to fly (with electronic controls to boot), located outside the Lycoming tent. He had the look of a man greatly relieved to have the Evo on display, beautifully painted and immaculately upholstered.

I know the feeling. In the weeks leading up to the show, in the process of installing a Grand Rapids Horizon HX and a Garmin G3X, my own airplane was utterly and completely apart from the firewall to the seats, and I wondered many times if I was going to make the big show.

But were all here. And, Im told, for the next few days, the weather will be fine.