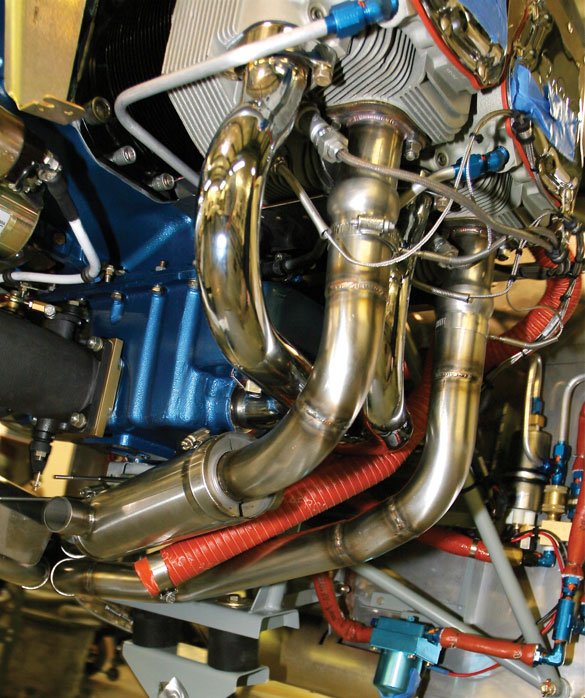 A well-designed Experimental exhaust will have high quality 321 stainless tubes, neat welds, and flex points to prevent long-term cracking. This one is from Aircraft Exhaust.

Exhaust systems arent much to look at. At their best they’re gray or black, and as the hours pile up they eventually turn a sort of muddy yellow. Its easy to ignore your engines exhaust system, yet that set of pipes is one of the most important of all firewall-forward accessories.

Aircraft exhaust systems present a challenge to airplane builders, professional and amateur alike. Designers need to create a system to collect-and control-the tremendous volume of heat energy pumped out of each cylinder and route it all overboard. Exhaust systems must fit under the cowling yet not be routed too close to other engine accessories or to the cowling itself.

Approximately 45% of the heat energy in every gallon of avgas is lost out the exhaust pipe. Some of this excess heat energy can be put to use for cabin and carburetor heat, but the rest is pumped overboard. Good aircraft-exhaust design isn’t easy, and there are sometimes competing demands: Systems must not be difficult to maintain, must not be overly restrictive to free gas flow, must be extremely durable and, as always, their weight must be kept to a minimum.

Unfortunately, expediency and the need to fit the system under a streamlined cowling often win out over efficiency, especially on certified airplanes. Tests on the dynamometer (a device that accurately measures engine power output) by Ly-Con Aircraft Engines of Visalia, California, for Power Flow Systems showed that the manufacturer-designed exhaust system for a Lycoming-powered, mid-1970s Cessna 172 reduced the power to the prop by 17%. Power Flow designed an approved system using gas flow rules that restored 97% of the lost power. The key to the effectiveness of the Power Flow system is the almost complete elimination of back pressure, which allows the engine to breathe better, thereby increasing volumetric efficiency.

The neat thing about Experimentals is that our hands aren’t tied by the FAA, so we can build systems to get horsepower," says Clinton Anderson, owner of Custom Aircraft Parts in El Cajon, California. Anderson builds and repairs exhaust systems and system components for both certified and Experimental airplanes. 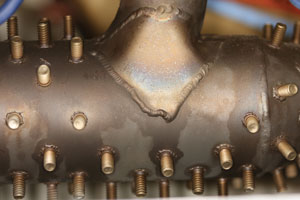 Studs welded to the pipe are designed to impart more BTUs to the carb- and cabin-heat muffs.

Manufacturers of systems for Experimentals are free to, well, experiment with tube size, routing, exit-tube size and configuration for each installation. For instance, Larry Vetterman of Hot Springs, South Dakota, has a long history of building custom exhausts for homebuilts, though he now concentrates on RV-specific systems. Vetterman has a great reputation for both the quality of his work and for his willingness to try (and thoroughly test) new configurations. One series of tests, worked in conjunction with Anderson, details the differences garnered by various system exit configurations. Another of the glories of the kitbuilt world is that talented manufacturers such as Vetterman and Anderson, along with builders, are free to test their ideas and pass on their experience to others.

For a long time, Experimental aircraft builders opted for the lightest, most powerful exhaust systems, but there has been more emphasis lately on reducing noise-both outside the aircraft and inside the cabin. (You would be amazed at how much an exhaust system can influence interior noise.) Tony Bingelis passed away a few years ago after serving as an EAA technical advisor and authoring books on building and caring for kit airplanes, but in one of his books, Firewall Forward: Engine Installation Methods, he explained exactly how to build a Swiss muffler. This device consists of a 4- to 5-foot long tube that is filled with a tight roll of stainless-steel mesh, and is slid and clamped over the exit end of an exhaust system. The long tube is suspended below the belly of the airplane. According to Bingelis, the exhaust noise disappears. All thats left is noise from the propeller and the slipstream.

Light aircraft typically use 321 stainless steel. One source says that 321 stainless will remain stable to temperatures as high as 900 C (1652 F). Another source says the top of the stability range is only 850 C, which is 1562 F. This is why one expert cites 1550 F as a realistic redline limit for turbine inlet temperatures (TIT) on turbocharger-equipped exhaust systems. These temperatures are rarely seen in normally aspirated or turbo-normalized systems, so such limits are no real concern to most builders and fliers.

When asked about system life, Anderson said, We feel that a well-maintained exhaust system should last two engine overhauls, or about 4000 hours. This estimate assumes that the system is sent to the builder for a complete inspection at the same time the engine is overhauled. When asked how to test systems for leaks, Anderson explained, We plug them, pressurize them to 10 psi and completely submerge them in water.

Exhaust leaks cause all kinds of problems. Leaks between the cylinder head exhaust port and exhaust-system flange are the most common. In addition to rapidly eroding the aluminum cylinder exhaust ports, these leaks can confuse troubleshooting when hot gases impinge on adjacent cylinder head temperature probes. The key to making a leak-free joint between the exhaust port and the system flange is to start with flat surfaces, use no-blo (also called spiral wound) exhaust gaskets, and not over torque the flange nuts. Anderson says over-torquing is the biggest cause of flange leaks, and they’re pretty easy to spot. Look for gray, tan or yellow discoloration around the port. The escaping gas deposits may appear fuzzy. Cylinder exhaust ports can be resurfaced without removing the cylinder, but special tools are required to do a good job. Lycoming service instruction 1204B says no-blo gaskets have superior sealing qualities and can be reused when the exhaust is loosened or removed. It recommends that they be replaced at engine overhaul.

Another tip for exhaust-system longevity: Never force components into position during installation. A well-built system will fit well without any forcing, hammering or gymnastics on the part of the installer. If your new or repaired system doesn’t seem to fit, contact the manufacturer for guidance. 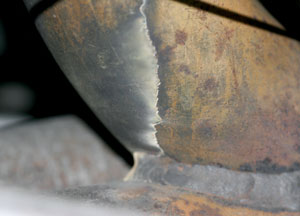 The telltale exhaust crack. Immediately inspect any you find during a preflight, oil change or annual condition inspection.

A typical cabin-heater installation with an air-cooled engine follows certified-aircraft practice, using a chamber around a portion of the exhaust system and routing ram air in one end of the chamber. As the air circulates around the pipe, it is heated before exiting to a firewall-mounted cabin heat on-off valve or a carburetor heat box. It is common for the system manufacturer to add baffles, flame cones or short steel studs to the inside of the chamber to increase the effectiveness of the heating system. Technically, the chamber is an air-to-air heat exchanger, and it often looks like a muffler.

These systems work well and don’t weigh much. The one drawback is that any exhaust leak inside the heating chamber will permit carbon monoxide from the exhaust stream to enter the cabin when the cabin heat is on. Because CO is a deadly toxic gas, even in small quantities, the components of the heating chamber must be tested for leaks at regular intervals.

Such testing is absolutely critical for flight safety. The most common method involves removing the metal shroud that forms the outer walls of the heat chamber and pressurizing the exhaust system through the system downpipe. One way to do this is to connect a shop vacuum cleaner exhaust hose to the downpipe; some shops use regulated shop air. Most shops pressurize the tubes to 5 to 10 psi. Its common to add a few drops of dishwashing liquid to a spray bottle containing water; when the diluted soapy water finds an air leak, you get bubbles.

The last gotcha is a blocked downpipe or exit pipe. This happens when the internal baffles or flame cones break down from prolonged use. Eventually these components break apart and are carried toward the exit pipe. If a big enough piece breaks off, it can partially or fully block the exit pipe, restricting gas flow. The internal baffles or flame cones in heat exchangers must be inspected for defects on a regular basis. This can be done visually by looking up through the downpipe with a mirror and strong flashlight.

That wraps up the exhaust lesson. Look for leaks at the cylinders, be extremely wary of CO leaks, and don’t let your downpipe get blocked. Happy flying.