Are you hankering to fire up your new engine? Not so fast, cowboy. This is no time to be champing at the bit. Care is called for before the starter ever turns. There are two rules to live by from the initial installation through the first hour of flight time: Cleanliness is next to airworthiness and pre-oil for success. 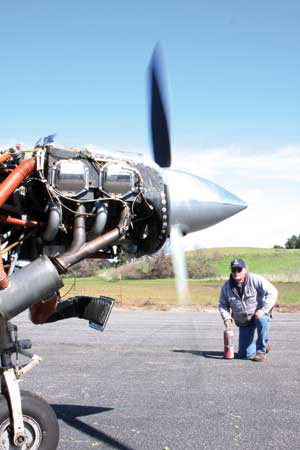 The first time you start your new or newly overhauled engine, plan for it, and be prepared for smoke and flame-just in case.

Make sure all of the inter-cylinder baffles are in good shape and are installed correctly. Inspect the baffle tie rods below the cylinders-they mustnt touch the cylinder rocker box oil return tubes. The baffle sheet metal must be distortion- and crack-free. Baffle seals must be securely fastened to the sheet metal baffles, and they should lie smoothly against the cowling. The baffles and baffle seals corral the high-pressure ram air above the engine. Even a small leak will compromise cylinder cooling.

Inspect the carburetor or fuel-injection-system air inlet for cleanliness. Check the condition of the alternate air door or carburetor-heat valve flapper, making sure they work and are in good condition. Install a new air filter.

Are the fuel and oil hoses clean or new? Don’t assume that the hoses you bought for the installation are sterile clean. Make sure by inspecting and flushing. Is the oil cooler spinster-Aunt-Betsy spotless? Grit as fine as a grain of sand can cause serious problems, so flush components until they’re sparkling. Field-flushing oil coolers isn’t as effective as sending them to an overhaul facility to be flushed.

After a short test-cell acceptance run, engines are preserved to prevent internal corrosion. These treatments aren’t designed to protect the engine forever. For instance, Lycoming Service Instruction (SI) 1481B states that treatments are for either 60 or 180 days. Engines destined for domestic buyers get the 60-day preservative treatment; however, the 180-day treatment is an option. When the engine rolls out of the test cell, we fog the cylinders, fill the sump with preservative oil and then roll the engine on its horizontal axis to coat the crankshaft, camshaft and lifters, said Mike Caldera, Lycomings manager of product support.

Move your engine to a warm environment before draining this oil, or use heat lamps to warm the cylinders and oil sump. Remove the bottom plugs before turning the engine by hand through three or four revolutions. Lycoming SI 1472 recommends tilting the engine slightly so that the bottom spark-plug hole of the draining cylinder is vertical.

Remove one of the sump plugs to drain the oil sump-this is when you figure out whether the left or right location works best for your oil quick-drain installation. Then install your quick drain and safety it. Wash all preservative oils out of the fuel system by removing the carburetor bowl plug or fuel injection servo fuel-inlet screen. Open the mixture valve and turn on the fuel boost pump if needed.

Hire a proficient third party to conduct a thorough pre-start inspection of the engine installation. Every item from the exhaust flange nut torque to the oil-hose routing to the safetying of the engine mount bolts must be inspected.

If its cold (below 40 F), either wait for a warmer day or preheat the engine and oil sump. Drain the fuel-tank sumps and the gascolator to remove water in the fuel. Pull the mixture to cutoff (full back), and turn on the fuel boost pump to pressurize the fuel lines from the firewall to the engine. Look for leaks.

Chock the wheels and tie the tail down. Have a friend with a fire extinguisher handy; hell also watch for any leaks. The first run will be for 3 minutes-keep the rpm between 1000 and 1200. Check for oil pressure as soon as the engine starts. If it doesn’t rise and stabilize within 15 seconds, give it 5 more seconds. No pressure after 20 seconds? Shut the engine down and investigate. If the oil pressure is OK, do a quick ignition system check at this rpm (the rpm drop is irrelevant) to make sure both ignition systems work.

After shutdown look for seeps, weeps and leaks, Caldera said. If the engine is clean, all temps and pressures are in the normal range, and both ignition sources work, you’re ready. Install the cowl.

The purpose of engine break-in flights is to seat the piston rings and stabilize oil consumption. The 1- or 2-hour test cell run-in at the factory or the field engine builder is just the beginning. A successful break-in starts when the airplane is taxied out for the first flight. Caldera recommends a standard engine runup, prop cycle and mag check before taxiing onto the runway. Not everyone agrees.

Two very experienced engine builders want something different. Ram Aircraft Engines of Waco, Texas, does not want any prop cycling done on the ground and none before 5 minutes of flight time has elapsed. Engine Components, Inc. (ECI) of San Antonio, Texas, recommends one very slight cycle-just enough to ensure that the prop can be cycled-during the pre-takeoff check.

Barrett says to keep taxi time and ground running to a minimum and do a normal pre-takeoff engine check. He also wants to see 300 F on the CHT and 150 F on the oil temperature before applying full power.

Never do a partial-power takeoff. Conservative engine builders want the pilot to let the airplane accelerate to 25 knots at moderate power before smoothly adding full power-this guarantees that there will be adequate cooling airflow over the cylinders. Others say this is unnecessary.

Climb out at a gradual angle. As soon as the airplane has enough altitude to safely return to the airport, reduce the power to 75% (manifold pressure reduction only for constant-speed installations) for at least 20 to 30 minutes. Then alternate in 5-minute cycles of 65% to 75% power for an additional 30 minutes before gradually reducing power and landing. 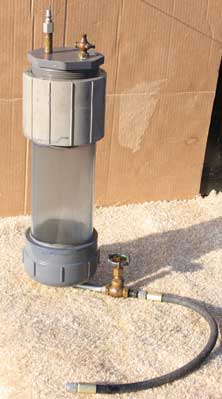 Steve Cerveny of Paso Robles, Texas, made his own pre-oiler out of 4-inch ID schedule 40 irrigation tubing, tubing adhesive and some fittings and valves he had around the shop.Glue a cap on one end and a threaded cap on the other end of an 18-inch long section of clear tubing, drill and tap holes for the oil outlet in the cap (bottom) end, and a pressure vent valve and air charge fitting in the cap (top) end. Install an on-off valve in the outlet to control the oil flow, and add a hose to match a fitting on the engine.Unscrew the cap, pour in 2 or 3 quarts of oil, tighten the cap and pressurize the tank. Cerveny uses 20 psi, but 4-inch ID schedule 40 PVC pipe is rated for pressures up to 220 psi and temperatures up to 140 F.

Pre-oiling your engine before the first start must be done, and done right. One method Lycoming approves of in SI 1241C consists of removing either the upper or lower spark plugs and using the starter to spin the engine until oil pressure shows on the cockpit oil-pressure gauge. Run the starter for no more than 30 seconds before letting it cool for 5 minutes. 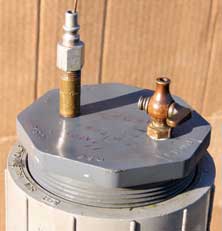 Some web sites suggest that the ultimate pre-oiling procedure uses the starter to spin the engine while pumping heated oil through the oil system using a pressure pot charged to 80 psi, but Caldera disagrees. The oil pump in Lycoming engines has a -inch impeller that pumps 7 gallons a minute, he said. When the cockpit oil pressure gauge shows 20 pounds, the engine is pre-oiled. Alan Barrett of Barrett Precision Engines in Tulsa, Oklahoma, agrees. We haven’t had anybody who pre-oils with the starter have any problems, he said.

Oil lines to turbochargers and external oil tanks must be disconnected prior to the pre-oiling procedure. Reconnect them after a steady oil flow is observed.

Tom Wilson - July 4, 2020
0
Gallons of ink have been dedicated—with only minor effect—to figuring out what it is...

Kitplanes - June 5, 2021
0
A sleek Lancair IV-P was on our October 1997 cover along with the blurb promising an over-gulf trip from Florida to Mexico.