Heres all you need to know about preheating a cold-soaked engine. If you dont, your engine wont make TBO. That is the easy part. The more difficult part is determining when to start preheating, how long to keep it on and which preheating system to use.

So, when to preheat? Lycoming recommends that preheat (and an external battery or power source) be used whenever its colder than 10 F, unless the engine is an O-320-H or an O/LO-360-E series. Start preheating those at 20 F. Fred Potts, author of F.E. Potts Guide to Bush Flying, points out that once temperatures get down to 15 F (-9 C) engines must be preheated for satisfactory fuel vaporization.

Is the engine in your airplane equipped with a turbocharger? Disregard the guidelines in the last paragraph. Even though turbocharger center bearings can handle long-term exposure to very high exhaust gas temperatures, they wont last 30 seconds without a plentiful oil flow. Preheat cold-soaked, turbocharged engines when the outside air temperature gets down to 30 F.

Potts knows something about working in difficult environments, and he pretty much ignores what the engine manufacturers say about preheat temperatures-on the conservative side-preheating all of his engines at 30 F. The reason? I like to get my full TBO, he writes.

Pilots who don’t preheat risk engine damage including spalled camshaft lobes and followers, and scuffed piston skirts. Steel cylinder barrels are not as thermally reactive as aluminum pistons, so the normal 0.002 to 0.004 inch piston-to-cylinder wall clearance lessens immediately after starting as the pistons warm and quickly start expanding.

Oil is thick and slow to circulate when cold, but multigrade oil eases starter loads, which helps engine starting. As temperatures drop, avgas doesn’t vaporize well, which can add to starting difficulties. This leads to wear on the starter and over-priming, which washes the protective oil layer off of the upper cylinder walls, resulting in accelerated wear.

Other cold weather safety practices include installing winter fronts, partially blocking off the oil cooler to keep oil temps up (180 F is optimal) and lagging (insulating) crankcase breather tubes on big-bore Continentals to prevent moisture from freezing in the tube.

So What Do You Do?

Heaters can be broken down into four categories: those requiring 110-volt power to generate heat and turn a fan to distribute the heat; 110-volt devices that are made up of a variety of resistance heaters that may include heating straps, heating pads, bolts, studs and screw-in heaters; combination units that produce heat from bottled gas (either LP gas or propane) and require electricity (110 or 220 VAC, 12 or 24 VDC) to drive a distribution fan; and fuel-burners that don’t require additional power. This last category is a favorite among Alaskan pilots.

The simplest and least expensive preheater is a trouble light and a 60- or 100-watt incandescent light bulb. Secure the trouble-light cage under the engine and under the cowling, turn on the light, cover the top of the cowling with a blanket or an old sleeping bag and go off to breakfast. If its not too cold out, the engine will be ready to start in three to four hours.

One step up from the trouble light is a small thermal pad bonded to the engine oil pan. Almost all companies sell these. E-Z Heat, a manufacturer that claims to be the originator of flexible hot pad systems, sells its thermostatically controlled 300-watt heating pad for between $170 and $200. Its available in 110- and 220-volt versions. The pad for an O-360 measures 4×5.5 inches.

Heating pads are also the heart of McFarlanes 300-watt Safe-Heet system. Discounted prices range from $186 for the heater up to $244 for the heater and thermostat. The thermostat ($72) and a ground-fault interrupter/surge protector ($30) can be purchased separately.

Reiff and Tanis systems also use heating pads in conjunction with a variety of small 110-volt-powered heating elements semipermanently mounted at critical spots around each engine.

Tanis has provided tough, dependable engine preheating systems since the 1970s and has been an acknowledged industry leader for years. Not too long ago the only solution was to call Tanis. These systems are made from heating pads bonded to the oil sump and engine case, with individual small heaters attached to or screwed into each cylinder head.

For years, Tanis cylinder-head heaters were mounted in the cylinder head temp (CHT) well of each cylinder. This worked fine prior to the widespread installation of engine monitors, when monitor CHT probes displaced the Tanis probes. Piggyback heater/CHT units were tried, and today Tanis provides a variety of head-heating solutions including heated induction tube flange bolts and other small heaters that don’t compete with monitor CHT probes for the probe well. Tanis systems for four-cylinder engines range from $420 to $560 for a standard system and $720 for a premium system. Tanis also provides preheating systems for Rotax and Jabiru engines. 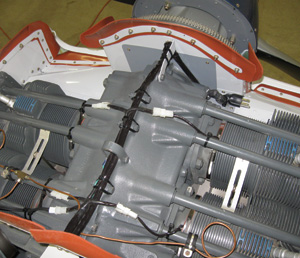 As Tanis wrestled with its probe-well dilemma, Bob Reiff of Reiff PreHeat introduced his HotBand and HotStrip components system in Standard, XP and Turbo XP versions. The core of Reiff systems are the HotBands-small heaters attached to stainless-steel bands that mount on each cylinder barrel below the cooling fins.

Instead of heating each head, Reiff decided that heat applied to the steel barrels would also heat the heads. He touts his system as non-invasive compared to the Tanis system and claims a best-in-industry, no-fault five-year warranty. Reiff systems start at $435 for a standard system-with HotBands and a pan-mounted HotPad-for a four-cylinder engine. A Turbo XP version that puts out additional heat and has a temperature-control on the pad for the same engine will run $695. Rotax engine systems range from $279 for a standard system to $479 for the super-cold temperature model. Reiff is the only company that advertises an oil cooler heater that sells for $98. 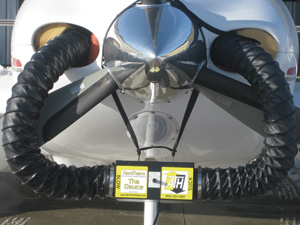 Aerotherm is a relative newcomer to engine preheating. The Aerotherm Deuce system circulates a lot of dry, hot air around the engine compartment. It consists of a small box that contains two 800-watt heating elements, a high-quality blower fan with a 40,000-hour life, a thermostat and hoses. A heat-delivery hose is attached to one side of the box along with a heat-recovery hose on the opposite side. Stick the delivery hose in one side of the cowling and the heat recovery hose in the other, and the system starts pumping 6500 BTU of

210 F heat in minutes. The thermostat control knob projects out of the front of the box. Aerotherm recommends setting the thermostat to 70 F and leaving it there. After the temperature is stabilized, power usage is quite reasonable. The Deuce, complete with accessories and a carrying bag, sells for $500. 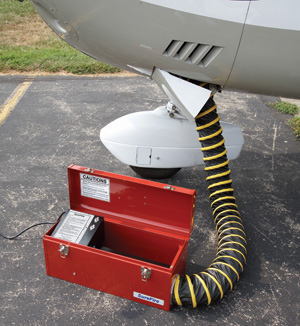 SureStarts system delivers 300 to 350 air to your engine and weighs just 17 pounds.

Crystal Airways sells the SureStart electric heater thats advertised to put out 20,000 BTU. The unit consists of an electrical resistance element and a blower fan mounted in a 16-inch metal toolbox. A 5-foot-long hose also fits in the 17-pound box. Put the hose up inside the cowling and throw the switch. This self-contained 110-volt heater sells for $499 through Sportys Pilot Shop.

Red Dragon heaters have been around for a long time. These self-contained units fit neatly into a lidded box weighing 16 to 20 pounds. An electrically powered fan-driven by either 12 volts from a car or the airplane battery or 110 volts-pushes the heat generated in a burner can through flexible tubes into the engine compartment. Operation is simple. Power the fan, connect a liquid or vaporous LP gas hose to the burner can, turn the gas valve, and push the start button. Whoosh. The gas burns, producing heat energy, and the fan pushes it along. Prices start at $500, with the high heat limit sensor model coming in at about $600.

Out and About Options

During my Alaska flying days, most of the local airplane pilots used Coleman catalytic heaters for preheating. In 1990 or thereabouts, U.S. production of these fine little heaters was banned. They continued to be built in Canada.

These were popular because they didn’t produce an open flame, burned for hours on a single filling of white gas, were compact enough to stuff inside most cowlings and, when used with an insulated engine cover, did a fine job of keeping the engine toasty and the oil warm during nights in the bush. Like many out-and-about stoves, these also performed backup duties as a survival tool if the airplane were to break on a trip. These units show up from time to time on eBay.

Laying aside the Fred Potts solution of a gas-burning blowtorch, the other option for off-the-grid fliers is the Northern Companion preheater, which consists of a small multi-fuel camping stove mounted inside a tough stainless-steel tube. Fold-out legs steady the tube. One end of a flexible hose is attached to the top of the tube, and the other is secured to the lower part of the engine or lower cowling. A big advantage is its multi-fuel capability. The stove will burn white gas, leaded or unleaded auto gas, kerosene, diesel, Jet A and avgas, and it puts out about 20,000 BTU. It can also be used for cooking or snow melting. It is light-6 to 7 pounds-has no moving parts and is utterly dependable. Convection moves the heated air, so it wont get a cold-soaked engine up to operating temperature as fast as other units, but thats offset by simplicity. The Northern Companion sells for $450 to $550.

There has been a lot of debate about the wisdom of plugging preheaters in and leaving them going. Its now thought that unless the engine is going to be flown, its best not to preheat. If not, there’s an increased likelihood of engine rust, because heaters don’t get hot enough to cook off moisture inside the engine. Flying is the only way to get oil temperatures hot enough to boil off internal moisture.

What to do? The favored preheating procedure is to start preheating three to four hours before engine start. Timers can do this easily provided the airplane is close to a power source. But if weather or circumstances result in a cancelled flight, the timer system breaks down.

Winter flying is a treat. The air is smooth, engines and wings come alive, and freshly washed air yields awe-inspiring vistas. Get out there and fly, but to be on the safe side, preheat your engine when temps approach freezing.