For most homebuilt aircraft, the choice of an engine is in the builder’s hands. Sure, you might not, realistically, be able to shoehorn that Pratt & Whitney PT6A into space normally reserved for a Continental O-200, but there are still many avenues open to builders. Even for some real "point" designs-where the weight and power of the engine factor heavily in the overall aircraft’s performance and utility-there’s usually some leeway. 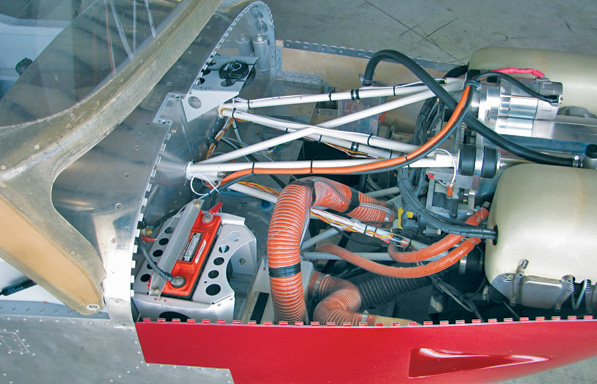 The Jabiru 2200 engine project required new engine mounts for the RV-12 as well as a new cowling. It retained as many of the standard RV-12 systems as possible.

Not so much with the Van’s RV-12. Because it was designed as an Experimental Light Sport Aircraft (ELSA) and was initially approved as such, builders were limited to the factory’s choice of engines. In this case, it’s the Rotax 912S. But more than that: If you want to build an RV-12 and license it as an ELSA, you must purchase precisely the right engine spec and install it exactly as the factory did in its conforming prototype. If you don’t, the aircraft is not compliant and should not be signed off by the FAA or a DAR. (That’s theory, of course, and reality is sometimes a different case.)

While there’s nothing wrong with the Rotax 912S-it has served in many designs with distinction, has a well-understood maintenance record and provides excellent power for the weight-there are some builders for whom experimentation is the itch that must be scratched. What’s more, now that the RV-12 has been approved as an Experimental/Amateur-Built design, more builders are creating unique ships. 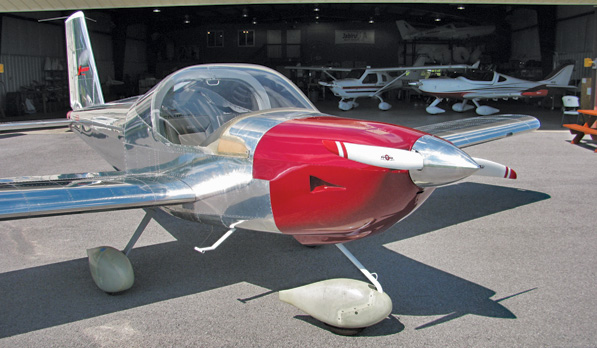 As shown at Oshkosh this year, the Jabiru 2200-powered RV-12 was unpainted except for the new fiberglass cowling. In the next iteration, the copilot-side NACA duct (feeding the oil cooler) will be replaced by an inlet under the prop spinner.

Thunder from Down Under

Assisting those builders is Jabiru USA, which has been developing and, subsequently, flying an RV-12 with the Jabiru 2200 four-cylinder, air-cooled engine. A few things to note. First, the 2200 is somewhat simpler and more compact than the 912 series. Because it’s air cooled, there is no need for coolant, a radiator and the associated plumbing. Second, it’s direct drive, so pilots who have a natural aversion to gearboxes can sleep well knowing the Sensenich ground-adjustable prop is bolted firmly to the Jabiru’s crankshaft.

On the flip side, the 2200 makes 85 horsepower against the 100 hp of the 912S. But as we’ll see in a moment, that might not be a huge detriment to performance. According to Jabiru USA’s Pete Krotje, the 2200-powered RV-12 turns in nearly identical cruise-speed figures as the Rotax version. On comparable fuel consumption, the 2200 and the 912S examples are neck and neck and both, according to Krotje, will bump up against the LSA max-speed limit of 120 knots at sea level. "The 912S does have a climb advantage," says Krotje, "of about 200 fpm." That’s based on initial testing. There may be some ground made up between the prototype and final firewall-forward package, but it’s not a lot of climb rate to give up.

As with other Jabiru-engine installations, the RV-12’s includes standard composite scoops to direct cooling air over the cylinder fins.

Especially given the price. According to Krotje, the entire firewall-forward (FWF) package undercuts Van’s offering (including the Rotax 912S) by a whopping $10,000. Jabiru will sell the FWF kit for $18,450, which is less than the bare cost of the 912S. What’s more, not all of the engine’s 20-pound weight advantage-the 2200 tips the scales at about 160 pounds ready to fly, versus 180 for the 912S-is given to the modifications. Meaning that by the time the new engine mounts are accounted for and the inevitable changes to the configuration take place, Jabiru expects the overall installation to capture most of that 20-pound swing.

Remove Tab A from Slot B

The conversion itself was fairly straightforward. "We used the same engine-mount points on the firewall as the Rotax does," says Krotje, "and worked very hard to use as many of the prefabricated Van’s parts as we could." The all-new tubular-steel engine mount picks up the same hard points on the firewall as used by the Van’s 912S installation. That long engine mount makes access to the back of the engine extremely good, and most of the rest of the pieces are left where you’d find them on an otherwise standard RV-12. The battery remains on the firewall, for example, and Jabiru started the project hoping to keep the same cabin-heat scheme using air ducted off the oil cooler.

Alas, that’s one item almost sure to change between now and the release of the firewall-forward kit at the end of the year. "We tried using a side NACA duct for the oil cooler but that’s not been effective," says Krotje. "In the next version, which we’ll be working on as soon as we get back from the fall airshows, will have a small chin inlet to feed the oil cooler directly." This move will partly reverse a design point from early in the program. "We wanted the cowling to look like a fuel-injected RV-7’s, without the bump." But the need to keep the Jabiru’s oil temperatures under control outweigh the aesthetic concerns, as they should. 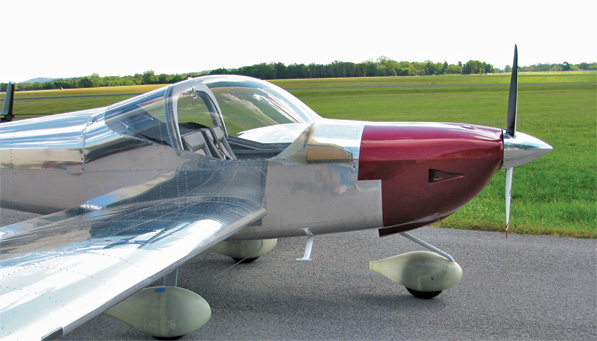 Jabiru USA’s goal for the RV-12 cowling was to offer a sleeker form than the standard part, hence the side NACA duct instead of a larger, under-propeller inlet.

How Long Is That?

Sharp readers will notice that the Jabiru installation has a much longer cowling than the stock RV-12, and that’s totally on purpose. "We knew from the questions we had that builders would eventually want to try the 3300," says Krotje, referring to the 120-hp, six-cylinder Jabiru option. "If we wanted to reuse the cowling, we’d have to move the 2200 forward. To fit the 3300, all we’d have to do is change the engine mount." Placing the lightweight 2200 so far forward-the prop arc is 8 inches ahead of the Rotax installation’s-moves the empty center of gravity forward. "Right now, we have about 160 pounds on the nosewheel," says Krotje. "But that’s without paint on the rest of the airplane. Other RV-12 builders tell us they’re running 150 to 155 pounds on the nosewheel. We think that, after paint, the 2200 will be in the ballpark." Any additional weight of the 3300 will help move the CG aft. Incidentally, if the 3300 was never considered, the installation would have the 2200 located about 4 inches forward of where the Rotax would be for an ideal weight and balance.

"If we had the 3300 installation ready at Oshkosh," says Krotje, "we could have sold a bunch of them." At this point, however, the development of the 2200 has to be completed first. "I also need to get some additional engineering done for the 3300. The 3300 weighs 20 pounds more than the 2200, and we want to be sure the rest of the RV-12 structure is up to it." It should go without saying that the RV-12 is already close to the max-speed limit, so adding the 3300’s additional 35 hp will mainly benefit climb performance. "I think the 2200 is an ideal match for the airplane," says Krotje, "but Americans like power." And choice, don’t forget that.

Larry Anglisano - May 20, 2016
1
The Experimental market gets few breaks when it comes to transponder and ADS-B requirements.