The annual AirVenture gathering in Oshkosh is both a blessing and a curse for many alternative engine vendors. On one hand, it is the place to meet up annually with everybody whos anybody in aviation, and much business is done in that short week. On the other hand, if you don’t show up for a year or two, the gossip flies from ear to ear, as theories abound as to why. Sometimes there’s even a good reason.

I got curious about some of these engine vendor voids, and looked into what was behind some of these multiple-year, serial absences. 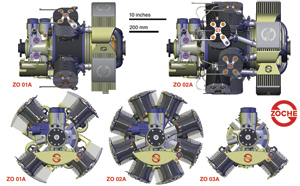 Ah, the Zoche. So much promise in the design. No production.

That shiny radial engine on display had become a fixture at AirVenture over the years, and when it wasn’t anywhere to be seen, it was even more obvious. There had been no shortage of builders at the Zoche display in previous years, all responding to the siren song of diesel efficiency, lower operating costs and fewer moving parts. Its a catchy tune indeed, and many other engine vendors such as SMA, DeltaHawk and Wilksch have joined the chorus with various levels of past and current success.

Like other diesel designs, Michael Zoches engine had many things going for it when compared to the traditional brand L or C avgas-burning engines producing similar power. The promise of lower weight, less frontal drag, cheaper fuel, fewer pollutants and a reduced sound footprint made Zoches diesel an attractive propulsion choice no matter how you looked at it.

Zoches literature profiled three different radial engine offerings, starting with a two-cylinder 70-horsepower (51 kW) model designed for the smallest of airplanes, a four-cylinder 150-hp (110 kW) model that would be ideal for most light aircraft and the eight-cylinder 300-hp (220 kW) model that was meant for heavy lifting. The three models shared much of the same engineering, with the most obvious difference between them coming down to the heft of the components and the number of cylinders.

The prototype on display was a study in fine German engineering, and a joy to inspect and marvel over. Conversations with the Zoche representatives confirmed the myriad benefits of diesel engines in aircraft, with no shortage of history confirming the long-term viability of the marriage. When the discussion came around to final cost and delivery schedules, however, things became a little less clear. The length of the certification process was usually cited for the delay in shipping engines to a receptive market, with anticipated deliveries being just a few years away.

Those few years have now stretched to well over a decade, and since 2007 the company has been reluctant to provide any further delivery updates. Email inquiries are usually met with the same boilerplate response referencing the delays in international certification. Although the company web site is still up and running, its been a good number of years since many of the pages have been updated.

In the absence of hard data, theories abound in the various aviation blogs. Some say a conspiracy exists among the more traditional engine manufacturers to keep competition away. But given the perilous stance of GA these days, I suspect the truth has more to do with the European Unions handsome stipends to new products under development. Once a product is actually in production, the funds dry up and the marketplace becomes the arbiter of continuing livelihood.

So don’t start welding up that Zoche diesel motor mount just yet. This promising powerplant is still just that for builders in the U.S.-promising. 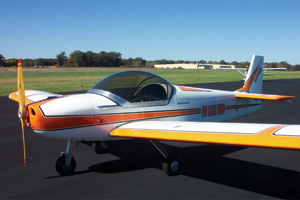 Aside from the orange trim (a signature Harley color, if you didn’t already know), you wouldn’t guess that this Zenith would make potato-potato sounds.

Harley-Davidson has been building air-cooled engines for more than 100 years, so why not stick one of its modern V-twins on the nose of an airplane? This was the thinking of Brett Ray, an experienced motorcycle racer and product innovator. And thats exactly what he did, driving a wood Sensenich prop via belt drive PSRU, and putting the combination on the nose of a Zenith Zodiac 601 XL.

He called the new venture Hog Air, and it was a crowd stopper on the AirVenture flight line for a few years. Those of us used to seeing the distinctive Harley V-twin as the centerpiece of a motorcycle had to adjust our thinking to accept the vision of it on the business end of an airplane. It took a few minutes of dedicated staring to get the brain to process the match-up.

Even better than it looked, it performed pretty well. The 95-inch, dual-cam engine was well-suited to the Zodiac test bed, and performed much like any other 100-hp engine would. With cruise speeds between 125 and 130 mph from a prop that still gave a respectable 700 fpm climb rate, it seemed like Ray was onto something.

But when the H-D guys in Milwaukee got wind of what was going with one of their engines, they were none too pleased. They demanded that Ray drop the hog moniker from his product, wanting to distance themselves from any potential liability issues. I couldn’t believe that I could buy a motor, says Ray, but still be told what I could and couldn’t do with it. 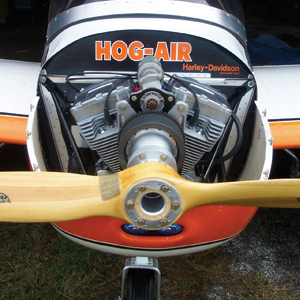 The Hog-Air started with a Harley-Davidson Big Twin and a belt reduction drive. The Milwaukee juggernaut didn’t like the idea of its engine in an aircraft.

Even after a name change to Sky Ray, it still wasn’t enough of a change for the engine manufacturer, which promised to continue the legal pressure should Ray subject the company to potential deep-pocket liability issues. It was a classic David and Goliath standoff, but in this case, David didn’t have a chance.

The somewhat incomplete and now historic Sky Ray web site is still up and running, and its a good place to see what Ray accomplished with his concept. There are several links to YouTube video clips of the engine flying in the 601 test bed, and it brings a smile to hear that distinctive Harley sound coming from an airborne vehicle.

Ray is continuing his engineering work in the motorcycle arena, and still has thoughts of bringing a new ground up opposed-twin engine solution to the Experimental market. But he admits that his time is mostly taken up these days with his motorcycle racing product development. However, hes not overly bitter about his Hog Air experience. Ray achieved considerable success with his modified V-twin aero engines, and has the video to prove it. 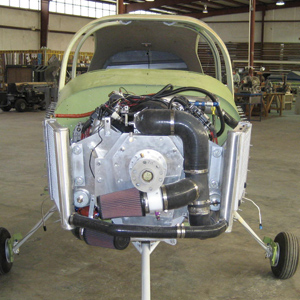 The Vesta V-8 project never gained traction. Heres a good illustration of the engines size relative to an RV-10 airframe.

The Chevy LS-2 automotive V-8 is impressive enough in its own right, but Jason Days Vesta V-8 conversion was a stunning sight. Usually displayed in the corner of one of the AirVenture new exhibit hangars, it sat on a stand with a massive PSRU and huge side-mounted radiators that demanded a closer look. There wasn’t much else in marketing materials at the Vesta display other than the engine itself, but it really wasn’t needed. Even in its static state, the conversion said volumes about raw power from beefy construction.

Today, there are only a few Vestas flying in different airframes. One is in a Murphy Moose, and another was in Todd Swezeys RV-10. Swezeys experiences with the Vesta conversion came to an abrupt end at Richmond, Virginia, in May of 2010 when a routine flight was interrupted by a small vapor explosion in the cabin. What started off as a minor conflagration turned into a total aircraft loss after the airplane landed and burned completely while waiting for the firefighting equipment to show up.

At that time, Swezey had accumulated roughly 150 flight hours on his Vesta installation, and still thinks fondly of it. Id fly a Vesta across the Atlantic before a Lycoming, he says. It was rock solid.

Where is the Vesta V-8 today? According to Swezey, Jason Day became concerned about potential liability issues with his conversions, and moved on to work in the burgeoning alternative energy field. His Vesta V-8 web domain is no longer in existence, and his contributions to the alternative engine blogs seem to have ended a few years ago. There’s precious little remaining of the Vesta project to be found on the Internet. 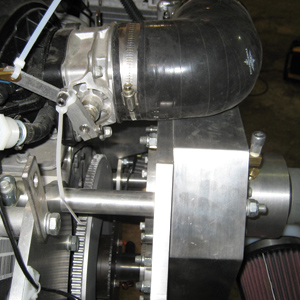 Like most auto-engine conversions, the Vesta required a reduction drive. Historically, this is where such conversions run into trouble.

However, a video clip or two of Swezeys first test runs of the Vesta installation can still be found on YouTube. Even though the conversion was significantly heavier than a traditional aircraft engine, Swezey thinks the Vesta was a marked improvement over the status quo.

Ken Scott of Vans Aircraft has a different opinion. He stresses that installing an unapproved engine type in any of Vans airframes essentially negates any future factory support, and puts the builder completely on his or her own. It ceases being an RV, he says, when you put something we haven’t tested on the airframe.

Adapting an existing auto or motorcycle engine to an aviation role isn’t an easy task. Neither is bringing a completely new design through development, prototype, test, certification and market introduction. What may appear to be simple at first can easily stretch into years, and sometimes even decades.

Considering the comparatively tiny market for aviation engines today, it has become a very tough business. And when you toss in the litigious nature of todays society, only the most motivated engine developers have the stamina to buck the odds and continue their innovations in aviation propulsion. But isn’t that exactly who you would want backing up your powerplant?