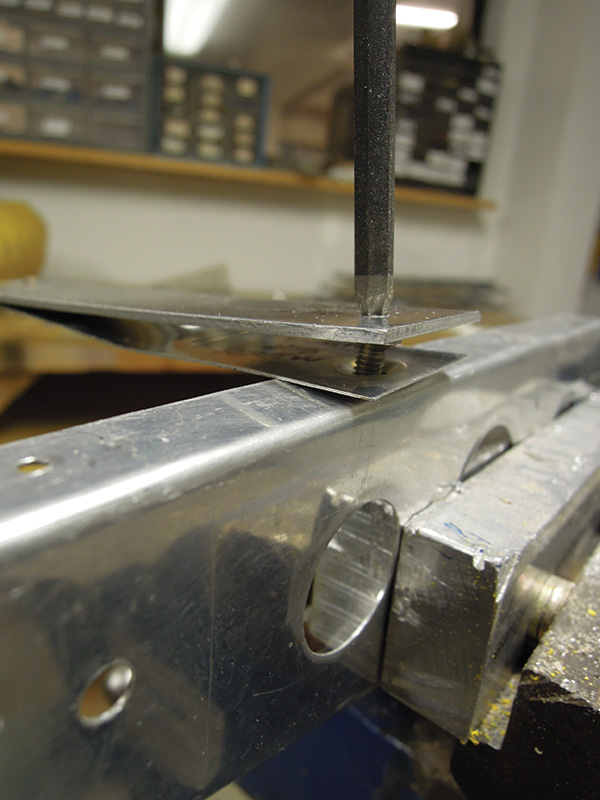 At least four times in the last few years, my RV-6 has forced me to locate a hidden hole and match-drill a new component to it. Unfortunately, none of these components was transparent. Finding the hidden hole while it’s buried under the new part calls for some strategy, or, in this case, strategies, plural, as each job required a different method.

The first task came when I found sloshing compound coming loose in my fuel tanks. It turned out to be easier to build new tanks than it was to clean out the originals, but doing so presented a new challenge. Unlike RV kits of the 21st century, the RV-6 was not built from a prepunched kit. I drilled every hole in the airplane during construction, and of course, hand-drilled hole patterns (especially mine) are, uhhh…unique. The challenge now was to drill 72 holes in each tank and match them exactly to nut plates that were already on the spar, but invisible with the tanks in place. No problem, says I. I’ll just make a template.

I bought some thin transparent Lexan strips and clamped them to the wing, covering the screw holes along the spar. I could see all the holes, and it was a simple thing to drill the plastic right where the holes were.

Now, after more airplane-building mistakes than any one person should ever make, I have gotten slightly smarter. I was not ready to use these templates on my expensive tanks without a trial run, so I used the templates to drill the hole pattern in a strip of aluminum scrap. After dimpling the scrap, I put it on the wing and screwed it down, fully expecting it to fit perfectly.

Which it did not.

Screws went into most of the holes without trouble but there were a few that didn’t fit. The distance between a few pairs of holes wasn’t exactly right and when the screws were tightened, the aluminum either stretched or buckled, depending on whether the distance was too little or too great. Evidently parallax and bifocals conspired to put a few holes in the template slightly off-center.

Finally, I twigged to the basic problem. There were 29 holes in the template. If I’ve gotten the math right (never a strong point!), that means there are 406 possible pairs of holes in each pattern—406 distances between one hole and another. Every one has to be exactly right for a one-piece template to work. Never in my life have I made 406 of anything “exactly.” 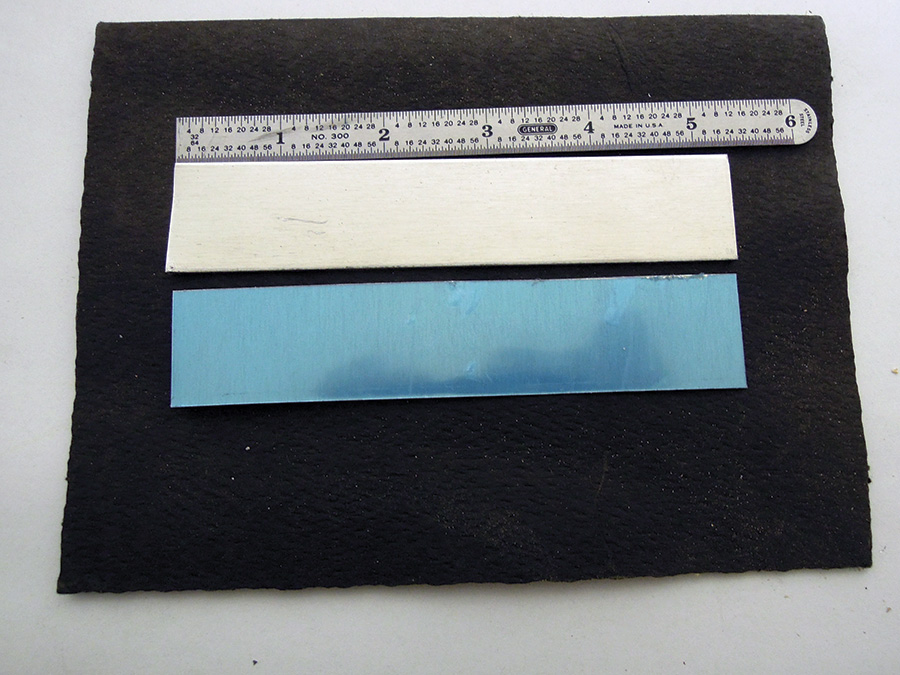 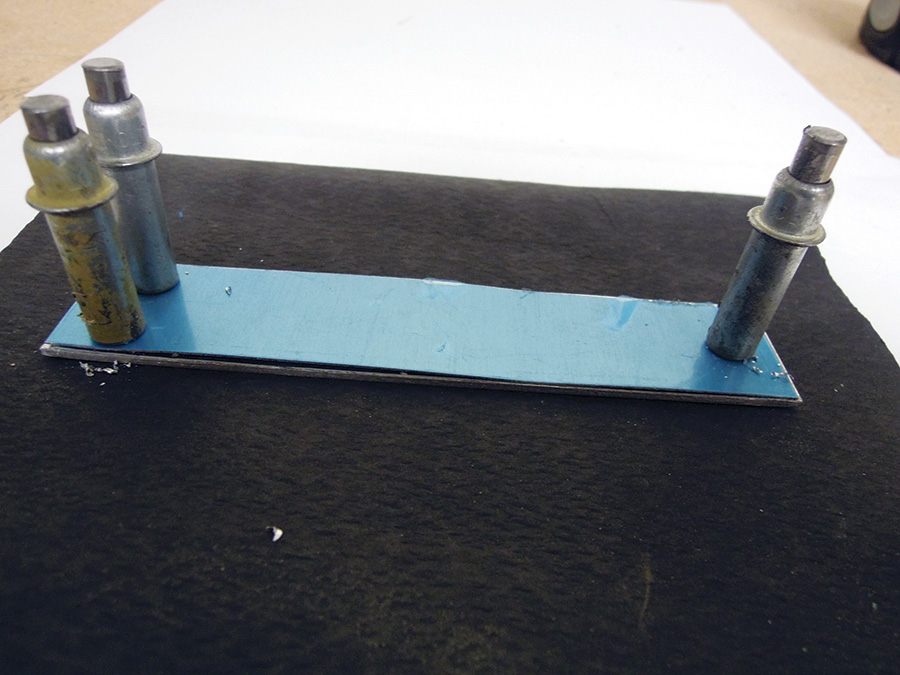 The two “leaves” of the hole-finder Clecoed together. 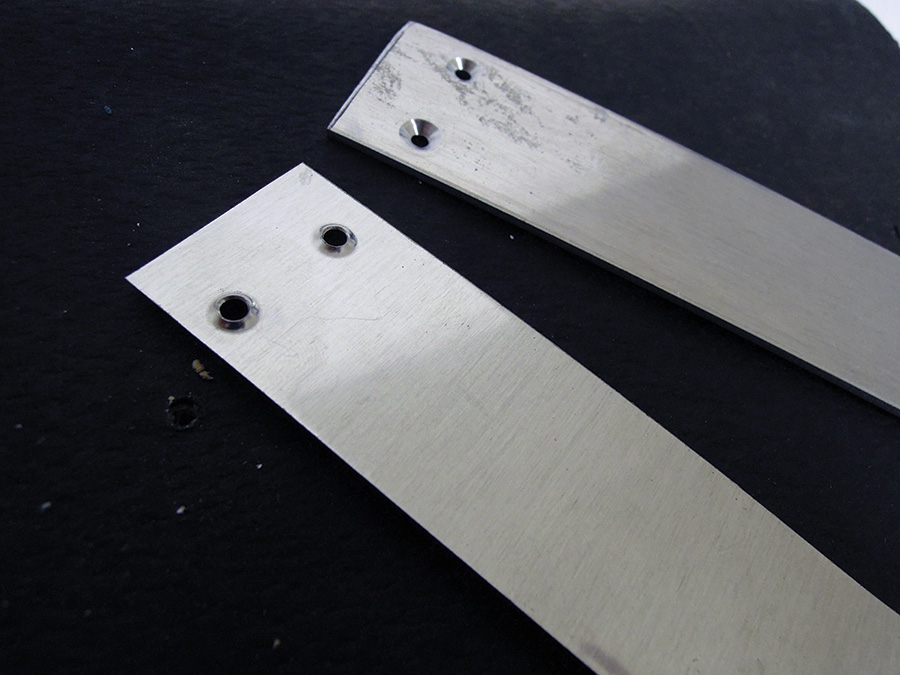 The trick is to locate each hole individually, so the distance between the holes never comes into play. Hole-finders, that’s the answer! Commercial hole-finders, sometimes called strap duplicators, are available, and I had a couple for smaller rivet sizes, but they were too thick and didn’t center well in the big holes for #8 screws. So I made my own, using strips of 0.016- and 0.063-inch thick aluminum. The two pieces were riveted together at the back and drilled for the screw hole. I used flush rivets so they could sit down against the skin. The thin piece was dimpled and screwed into the existing hole on the wing. Thirty of these only took about an hour and half to make, and they worked fine—for part of the job. 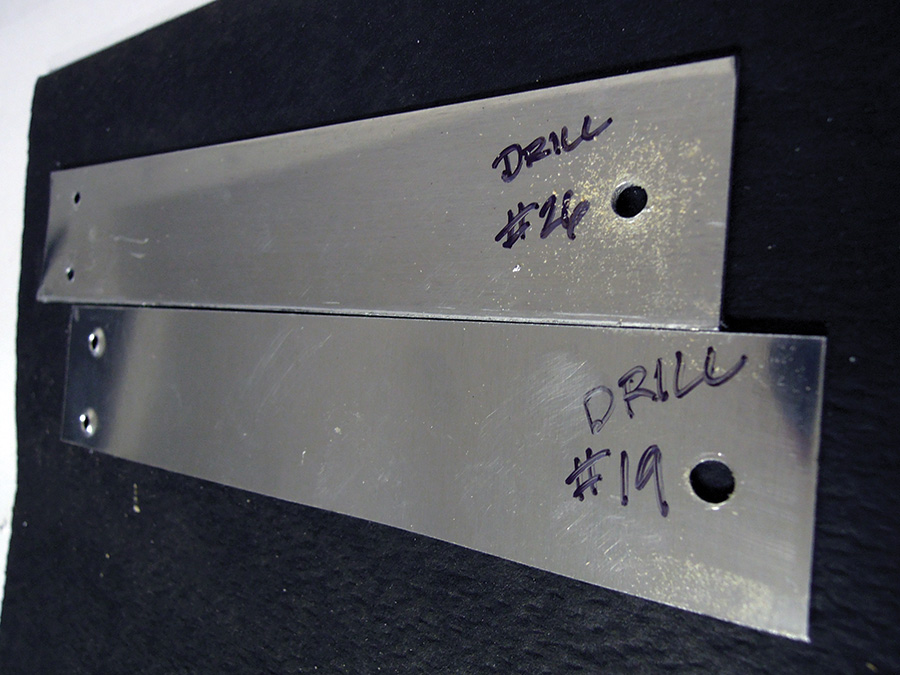 The business end is drilled to two different sizes. 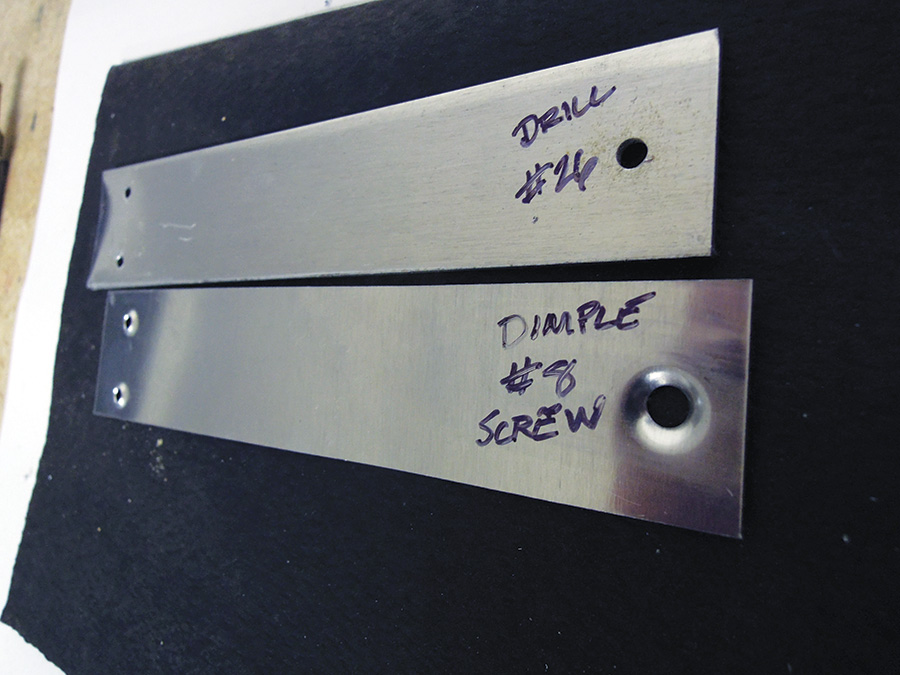 The larger hole is dimpled for a #8 screw. 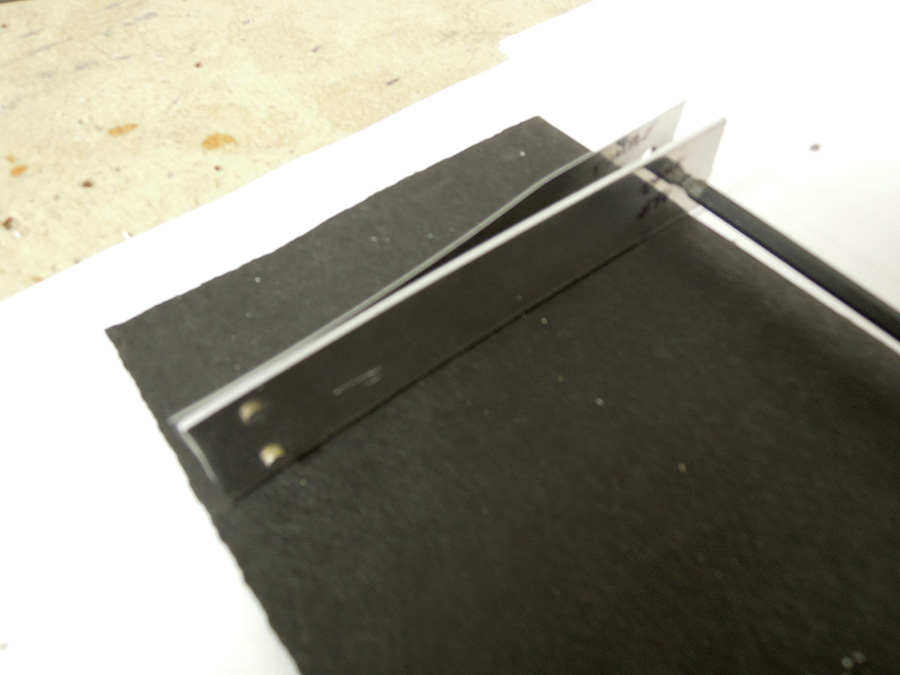 The RV-6 uses two rows of screws (top and bottom) along the rear of the tank to hold it to the wing. The aft rows are countersunk, so the hole finders could be screwed in with flush screws and allow the tank skin to sit down against the spar—or at least within 0.016 inch of it. The forward row of holes, however, is not countersunk. Attaching the hole-finders with round-head screws wouldn’t work, because the screw heads would keep the tank from fitting tightly against the wing. The result would be off-center holes.

For these holes I used a small tri-square to draw a line back from the center of the screw hole onto the wingskin. Putting a screw in the hole helped find the center accurately. Then I marked a distance. With a vector and distance you have to find the hole, right? The combination of methods worked well enough that the new tanks went on without undue drama. 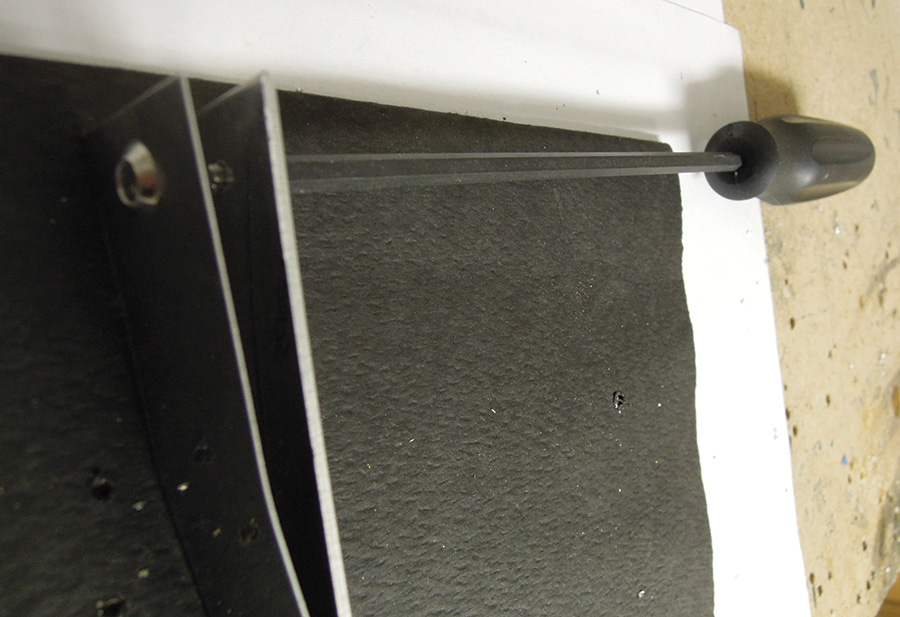 The smaller hole allows a Torx T15 screwdriver to pass through. 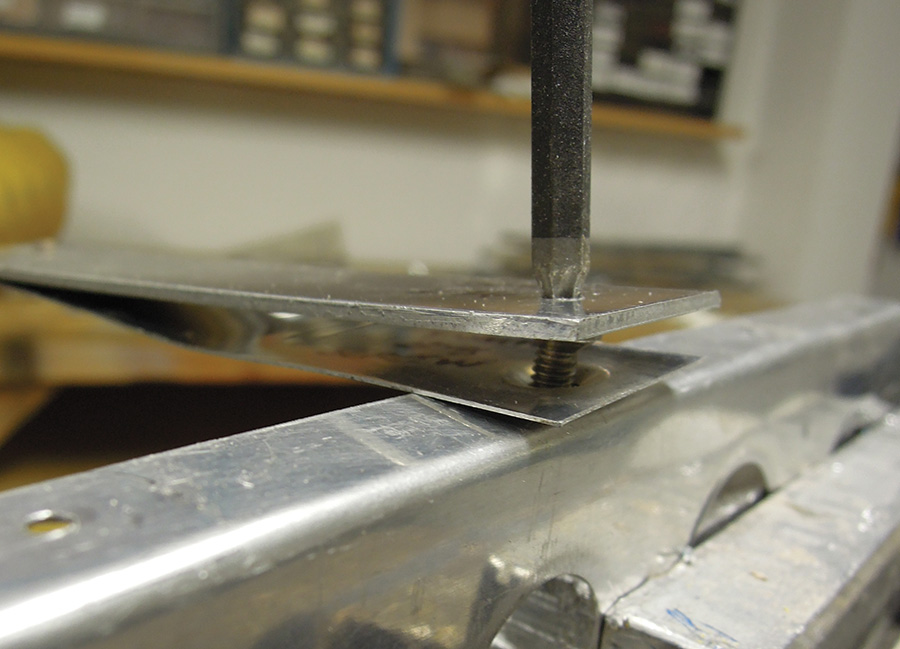 A Torx screw fastens the thin leaf of the hole-finder to the nut plate. 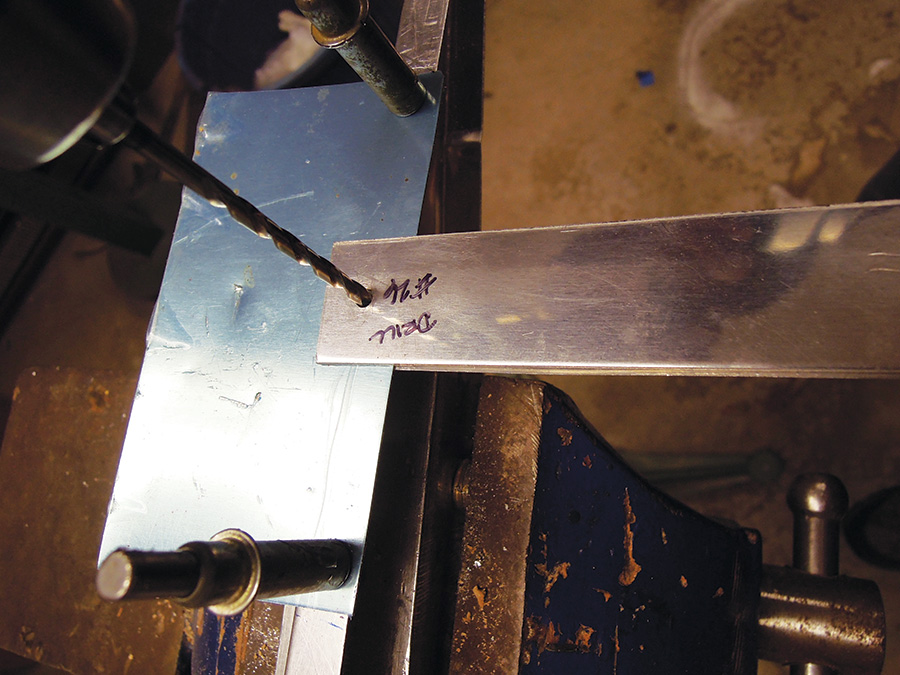 A cover plate obscures the nut plate, but the top leaf of the hole-finder shows where to drill.

Use a Laser Pointer

The next problem came underneath the airplane. The holes for the #8 screws attaching my fiberglass wheelpants were hogged out by many landings on rough strips, and the pants were flopping around. It wasn’t hard to patch the oversize holes with glass and flox, but fitting them back on the airplane and hitting the holes in the wheelpant brackets was more difficult. 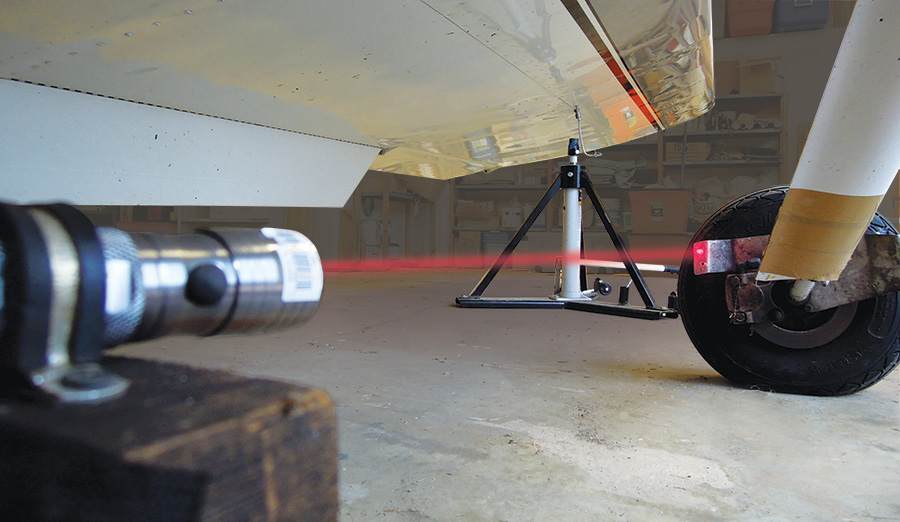 A laser flashlight mounted on a solid block is carefully aimed at the hole the screw must find.

With the wheelpant in place, the laser shows where to drill the hole.

When the airplane was first built it was simple enough to clamp the wheelpant to the bracket and drill a hole through both. The bracket had enough surface area (a 1.5×0.75-inch rectangle) that, even though it was hidden behind the fiberglass pant, you couldn’t really miss. Now, however, I had to drill a hole that would be exactly centered on an existing but invisible hole 0.166-inch in diameter. There wasn’t much wiggle room. I thought about using hole-finders again, but the problem was the same as the forward row of holes on the tank—the holes in the brackets are not countersunk, and I didn’t trust the accuracy if I used a round-head screw. The line/vector method wasn’t possible—there was nothing to draw the line on.

So I bought a small LED flashlight with a laser pointer in the center and secured it to a big, stable block of wood with an Adel clamp and a drywall screw. I set the arrangement on the floor about three feet away from the wheel, flicked on the laser, and adjusted the height with a shingle tucked under the block. I was very careful not to look directly at the laser, but it was still simple to adjust the beam until it centered directly on the nut plate. Without disturbing the laser, I fitted the wheelpant and blocked it into position. The laser drew a little red dot exactly where I wanted to drill.

With that little task complete, I looked at the aft fuselage. I’d never been completely happy with the one-piece fiberglass fairing that wraps around my vertical and horizontal stabilizers. It’s a traditional craftsmanship point on RVs and after seeing about a thousand that fit better than mine, I decided on a do-over—after all, I had the materials out for the wheelpant repair. 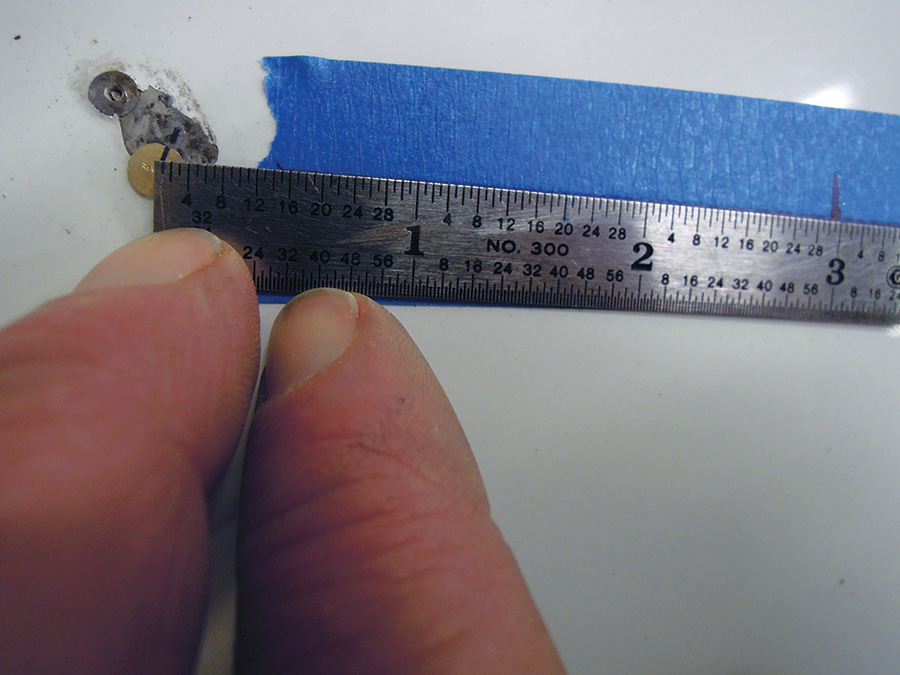 A line and distance locate the center of a hole. 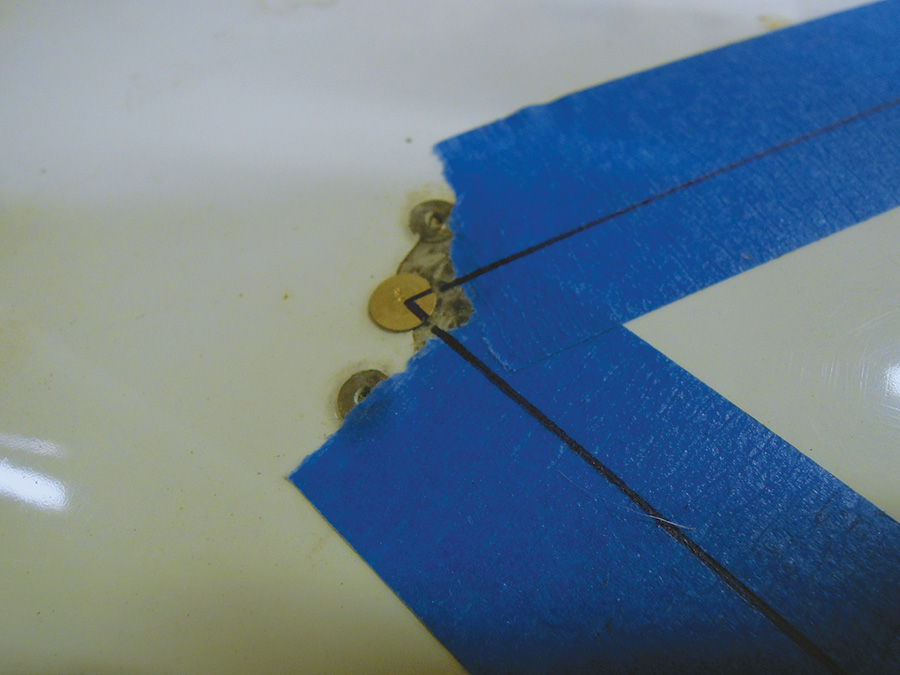 Two intersecting lines locate the center of a hole. Dropping a rivet in the hole makes finding the exact center much easier. 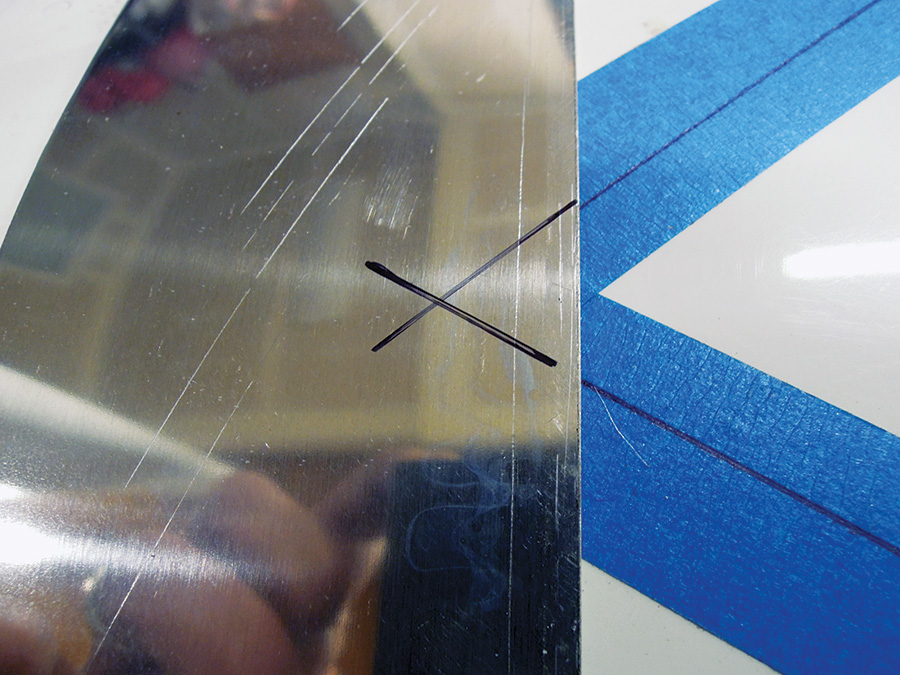 The lines are extended across the cover plate and the intersection locates the hole.

The revised version fit far better, but in the process I’d had to fill the holes for the attachment screws, leaving myself with the same problem I’d had on the wheel fairings. In this case, however, there was no good place to clamp a laser and hole-finders like those that solved the tank dilemma wouldn’t be accurate on the curving surface of the fairing. Instead, I dropped a rivet into the holes and drew a pair of lines at a 60-degree angle that intersected on the dimple in the head. Both lines were long enough to leave several inches visible when the fairing was installed. With the fairing in place, I used a flexible steel ruler aligned with the lines I’d made to draw new lines back until they met. Triangulation—so simple, so old, and so useful! Somewhere, Mrs. Pope (my junior high geometry teacher) is smiling.

Use a Drill Jig

Finally, there was the problem of fitting a new tailwheel assembly. This involves drilling two 3/16-inch holes through a steel tube (the swiveling mechanism of the tailwheel) and hitting two holes already in a steel rod (the tailspring inserted into the tube) dead center. For this job, I shamelessly stole an idea from KITPLANES contributor Dan Horton (a man who seems to have consistently good ideas) and made a drill jig. This consisted of a -inch thick aluminum block with a groove cut in one side (allowing the block to clamp tightly against the tailspring) and a notch cut in one end (allowing the tailwheel assembly to be installed on the spring while the jig was in place).

Once the jig was installed, it was simple to drill holes in it, using the holes in the spring as guides. With holes in the jig, I could install the new assembly and drill back through the jig. The only tricky bit was aligning the assembly—and that proved easy enough by leveling the airplane and using a digital level on the shaft of the tailwheel swivel to make sure it was vertical. Thank you, Mr. Horton! 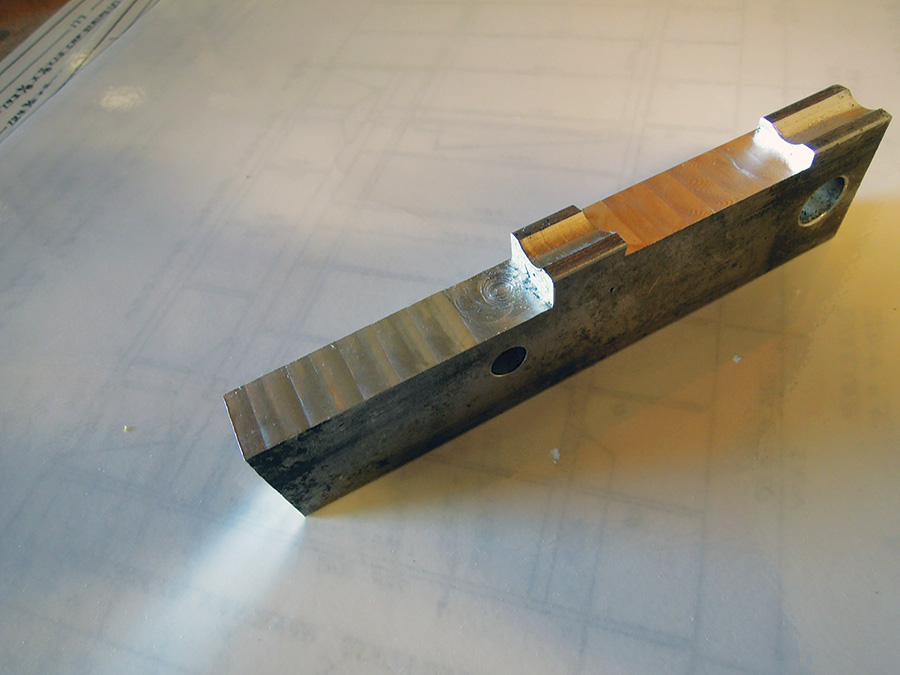 A scrap aluminum block is cut and milled for use as a drill jig. 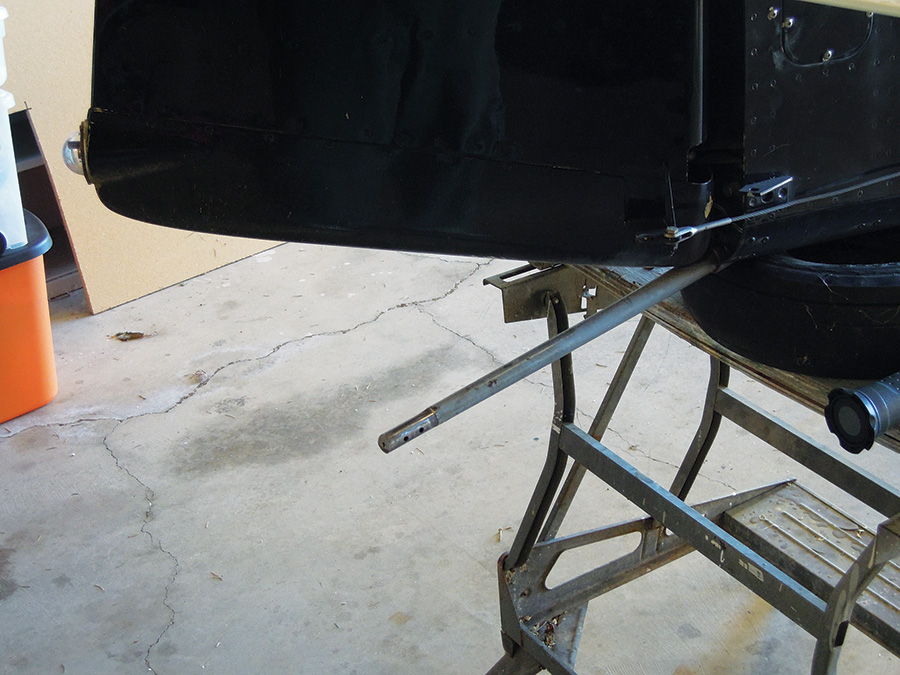 The tailspring, with the existing holes that must be matched. 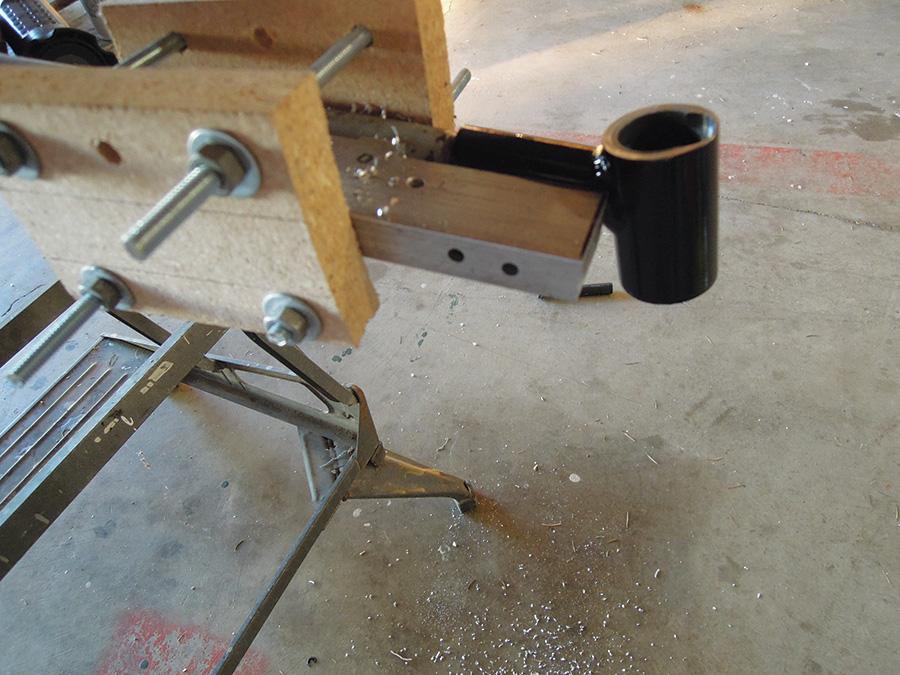 The jig is clamped to the tailspring. Holes have been drilled into the jig, using the spring as a guide. 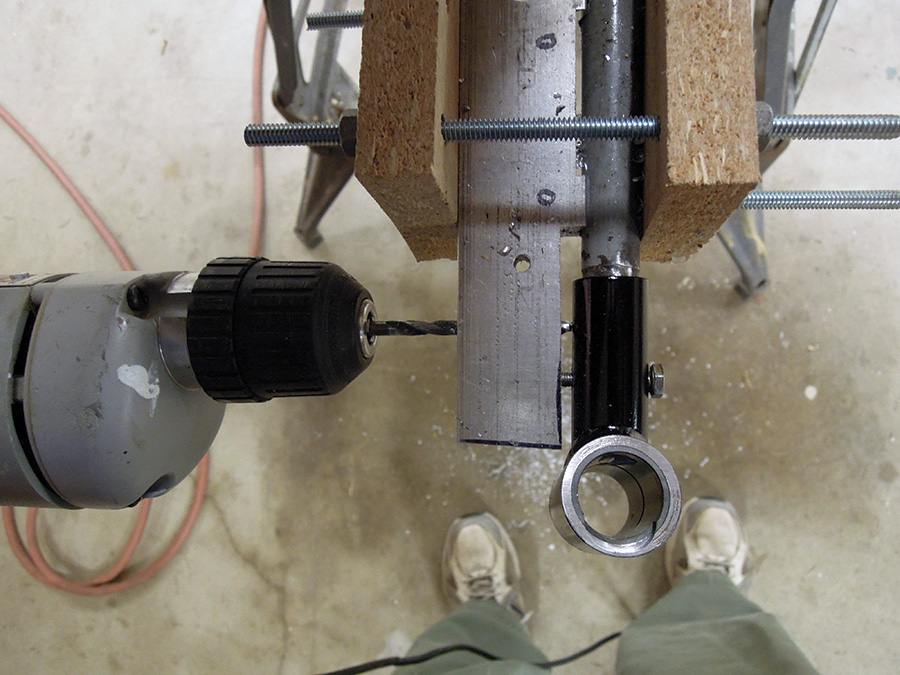 The new tailwheel fitting is drilled by going back through the jig.

Now that all the parts fit and are firmly reattached, it’s time to go flying. Just as soon as it stops raining. 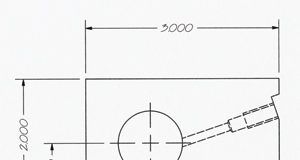 Bob Fritz - February 16, 2009
0
If you need to send a part out to be built by a professional shop, a good drawing, well identified, is essential. The KISS principle applies, and be sure you don't request closer tolerances or more exotic materials than you really need, or it will cost you.