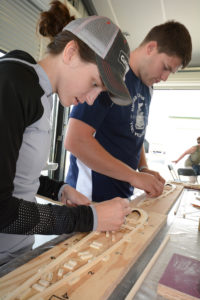 One thing separating AirVenture from most other aviation gathering is the overwhelming number of forums and workshops. For the hands-on experimenter or builder it’s a more-than-you-can-eat candy store.

Shelby Zaphe and boyfriend Kevin Weintraut jumped right in to an EAA woodshop. Both are from Westport, Indiana; 21 year old Kevin is an AirVenture veteran since he was 10 or so, this is Shelby’s first year. Both were having a blast learning to build wing ribs. We asked what the ribs were for and Kevin replied he had no idea. Neither did we, but it doesn’t matter as the expert EAA instruction and hands-on experience are what count.

Marc Cook - December 30, 2020
3
It never fails to amaze me, this choice in powerplants for our Experimental aircraft....