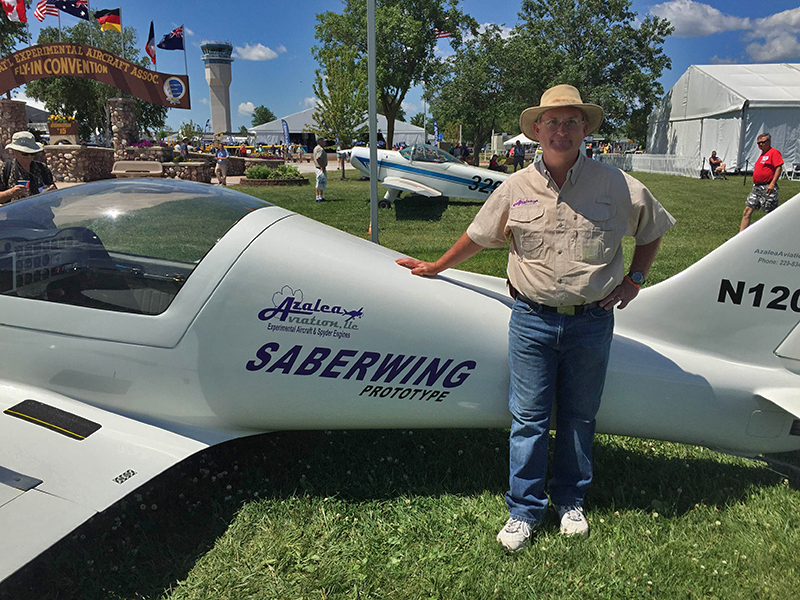 I met Bill Clapp and his wife Kyoung of Azalea Aviation today on the flightline at OSH. They were showing their newly designed kit airplane named the Saberwing. Recently Finished in the past year and now with 70 hours on the airframe, Bill and Kyoung flew it to OSH.

They currently have three customer kits under construction and are actively seeking two more dedicated homebuilders it round out their “first five”. This is Bill’s first airplane design, although he and his company are well-known in the Corvair aircraft engine rebuilder’s market.

The current Saberwing is fitted with one of Bill’s 100-hp Spyder Corvair conversions and Bill claims speeds of 150 mph and is expecting speeds well over 250 mph with the O360 planned for future models. Basically, the kit is a 2-place composite low wing cross country airplane that Bill is estimating can be completed in 500-1000 hours. There will be a taildragger version as well as tri-gear, with the gear leg lengths actually being adjustable at the time of construction in order to accommodate various propeller and engine combinations. The airplane is also quite roomy with a 43″ wide cabin and has a useful load of 700 lb, including 40 gallons of fuel.

Bill is now ramping up production and is also looking for investors. If you are at OSH, Bill and the Saberwing are right at show center on the flightline. Watch for more information in an upcoming article.