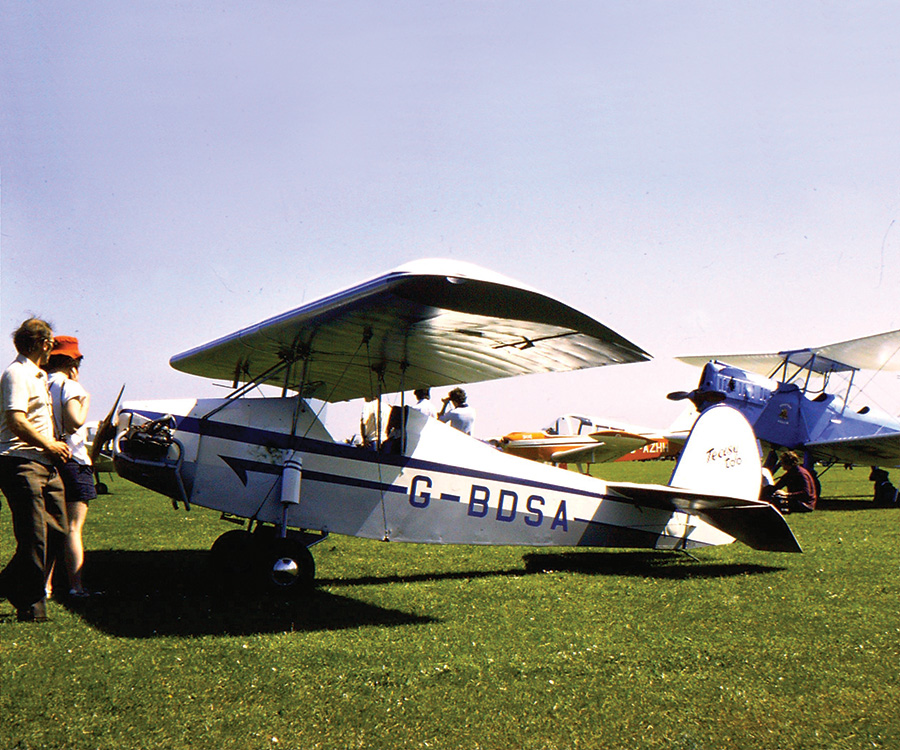 Eric Clutton is no longer a name well known in homebuilt and Experimental aircraft circles-except to a small, some would say elite, group of homebuilders. This light-aircraft designer from Stoke-on-Trent, England, is responsible for FRED (Flying Runabout Experimental Design), a plans-only design that was most popular with homebuilders in the 1970s and ’80s. Clutton recently sold FRED, his prototype aircraft, to a new owner, Mike Young, of Vero Beach, Florida. Clutton, now 86 years old and still in good health, has decided that after a lifetime of aircraft designing, building and flying, he will now retire from aviating, and FRED will go to a new home.

Clutton had been a high school teacher in the U.K. specializing in machine shop and technical subjects. The long school holidays enabled Clutton to spend most of his vacation time in the U.S., and in February 1983 Clutton bit the bullet, retired from teaching and immigrated to the USA, initially to Punta Gorda, Florida, then to Oklahoma, before he settled in Tullahoma, Tennessee. He worked for a while as a project engineer and shipped his prototype FRED, originally registered G-ASZY in the U.K., with him to the USA. It was re-registered and regularly flown as NX4499Y in Florida, Oklahoma, and then Tennessee, with regular side trips to Alabama. Clutton also bought a Continental A-65-powered Luscombe 8A while living in Tennessee, an aircraft he still flies occasionally, although he has increasing difficulty climbing aboard, so “that will have to be sold as well,” he told me. 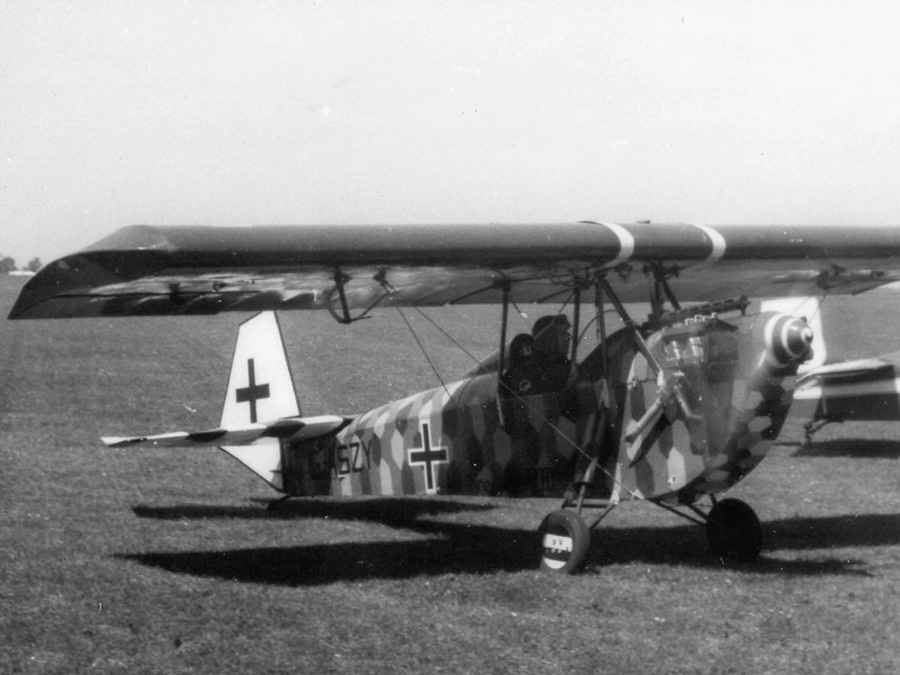 FRED with Continental A-65 engine in the U.K., spoof WW-I lozenge color scheme, and mock machine gun forward of the cockpit.

Clutton’s prototype FRED is a fairly basic single-seat design with open cockpit, parasol wing and taildragger undercarriage. For anyone who has honed their skills building traditional model airplanes, FRED is just like a giant model, and because it was designed in the U.K. in the 1950s and ’60s, all dimensions on the plans are imperial feet and inches. Construction of the wings, tail, and fuselage is mainly wood, plywood, and fabric, with the inevitable metal fittings, wing bracing wires, and metal engine bearers. It can mostly be built in a standard single garage on a couple of large, flat worktables. With its wings folded and tail removed for towing behind a vehicle, FRED is 4 feet, 3 inches wide. If it had to be compared to a better known U.S. design it would be the Pietenpol Air Camper, Pober Junior Ace, or Heath Parasol, although as FRED is a design in its own right, it’s not exactly like any of these. 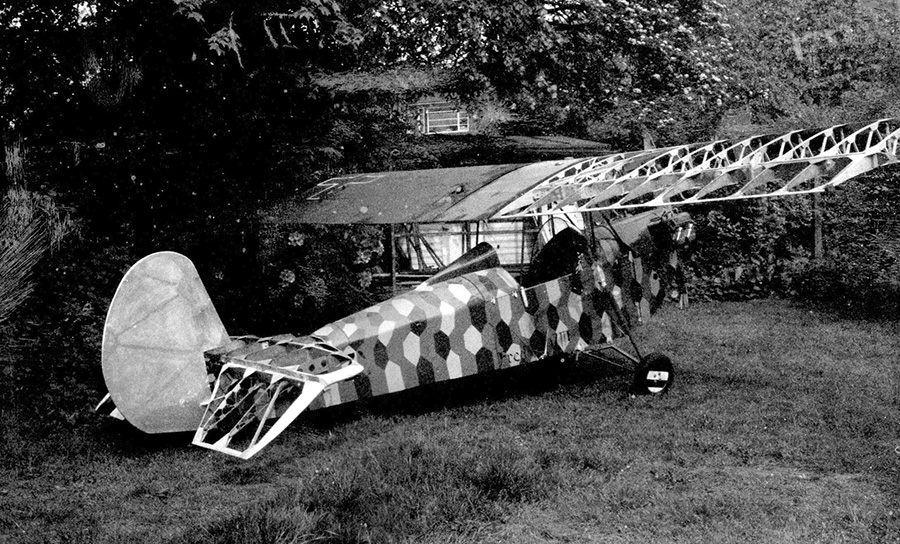 Rebuilt in 1975 in the garden of Eric’s home in Stoke, U.K.-note the simple wood wing and tail structure.

FRED has a maximum takeoff weight of 800 pounds (364 kilograms) with a 65-hp Continental A-65 engine. As with any homebuilt project, it is important to ensure that little extras don’t multiply and you find that the project’s empty weight is greater than it should be. The fuselage sides are flat, and the dimensions can be drawn out on the construction table. Jig blocks can then be screwed to the table and the spruce longerons placed, before inserting the diagonals and verticals, and then gluing the whole shebang. The drawings show a 22-inch cabin width, but most builders-being more ample-modify it with an extra couple of inches’ width. Gussets are glued at right angled joints for extra strength. Before long you have a coffin-shaped wood framework with the rear fuselage a Warren girder structure. Next on the flat table can be the tail feathers, followed by the wings, which are spruce and plywood, with a torsion-box leading edge, auxiliary rear spar and drag spar, provided you’ve already built the Gttingen 535 profile wing ribs (a lot of under-camber but lots of lift, thickness/chord ratio of 17.2%). The prototype’s wings when fitted had no dihedral and as Clutton says, “looked a bit droopy so I altered them to 2-degree dihedral under each wingtip, which visually improved FRED, but made no difference to handling.” FRED is a semi-cantilever design, which means that the apparent lift wires do not take lift loads, but are simply drag and anti-drag wires. Neither are they wires, but quarter-inch steel rods. The 9-gallon metal fuel tank is in the fixed, wing center section, and gravity feeds the engine. The cabane is fixed, but both outer panels fold flat against the fuselage sides with their leading edge downward, locked in position for road towing and able to be unfolded and prepared for flight by one person with no other aids in a matter of minutes. 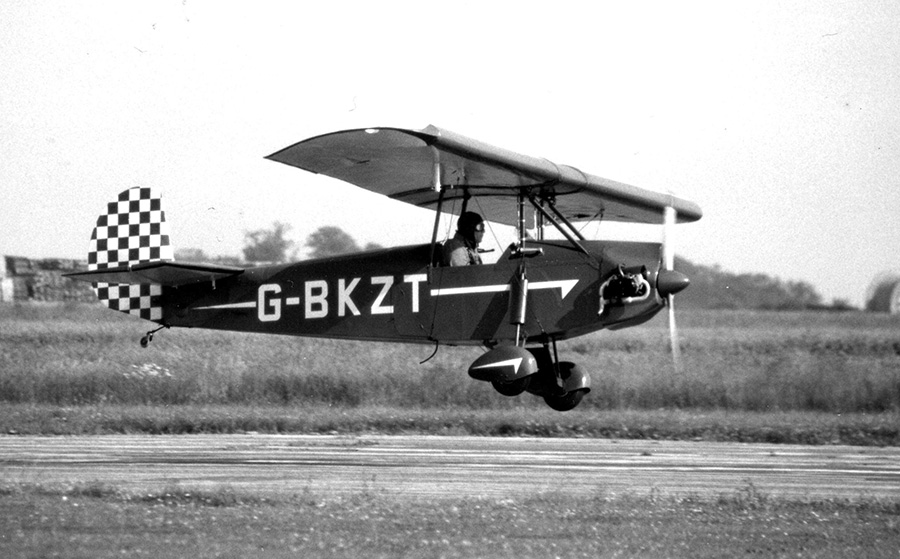 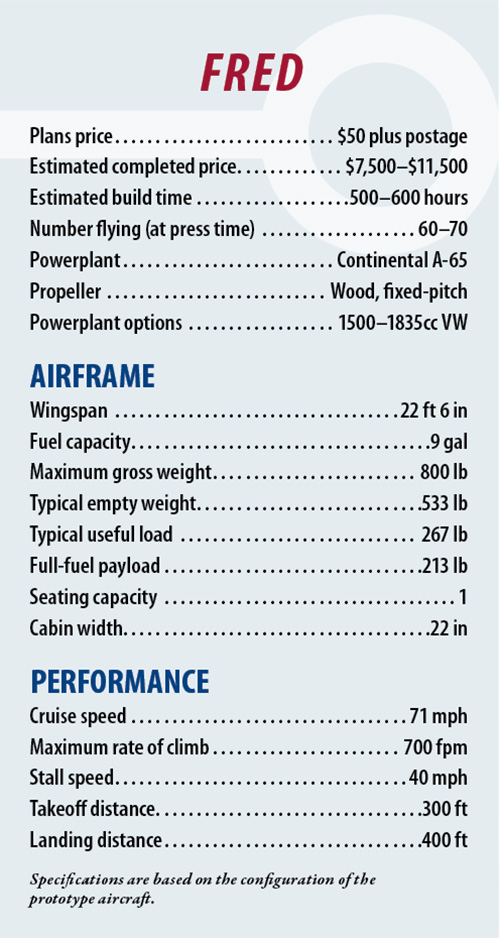 All the main airframe elements are as simple to construct as the fuselage, and just like those aero-modeling adventures of your youth. Many builders have streamlined the basic FRED design, and the addition of a curved and rounded tail and rudder does wonders to the aircraft’s visual appeal. As part of Clutton’s design evolution of FRED, he initially fitted bungees for the undercarriage, but quickly changed this to steel coil springs, which proved reliable and maintenance free. Then, when he decided to fit wheel brakes, he also moved the main undercarriage wheels forward by 2 inches. When highway towing FRED, Clutton has safely reached speeds of 70 mph, but a little slower is probably advisable.

Clutton first flew his prototype FRED at Stoke city airfield at Meir in the U.K. on November 3, 1963 with a 27-hp converted Triumph 5T motorcycle engine. “There were simply no other suitable engines available to us at this time,” he said. Several alternative engines were then tried, including a Scott A2S, a Lawrence radial, a 1500cc VW, a Franklin AC4-150, and last, a Continental A-65. Most of the FREDs now flying are fitted with an 1800cc VW or A-65. The aircraft’s designation also changed as the design was tweaked and new engines fitted, to FRED Series II in 1966, then after sustaining considerable damage in a crash in 1974 and again in 1978, to FRED Series III. The Continental was fitted to Clutton’s FRED in 1982, just in time for one quick test flight in the U.K. before the aircraft was dismantled for shipping to the USA. During FRED’s gestations other design improvements were made, including the installation of wheel brakes, a steerable tailwheel, and a spring trim (which is not shown on the plans). The undercarriage modifications were done to make it safer when taxiing FRED among a bunch of other aircraft and obstructions. Various color schemes were also adopted, initially “Red Baron Red,” then a WW-I camouflage lozenge scheme, and finally, the current scheme of the aircraft as it was sold to ex-pat Brit Mike Young , a wartime training yellow, with roundels. 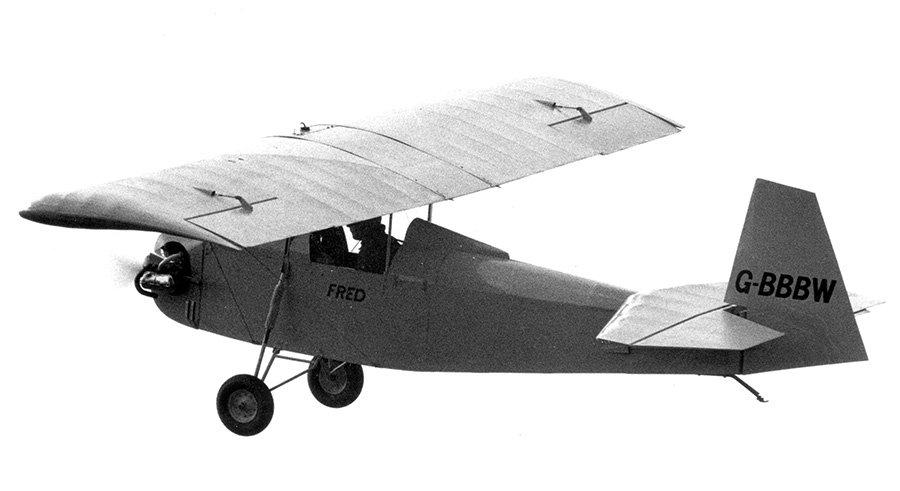 A basic example of FRED G-BBBW built by Don Webster in Yorkshire and flying in the U.K.

Even with all the changes and improvements, the design objective has remained constant: to produce a simple-to-build, wood/fabric, single-seat, sport, parasol-wing monoplane with wings that fold for towing behind a car using the aircraft’s own main undercarriage wheels, thus enabling the pilot/owner to keep the aircraft in a garage at home and avoid expensive hangar bills. The inspiration was definitely Henri Mignet and his Flying Flea, but that’s where the similarity ends. 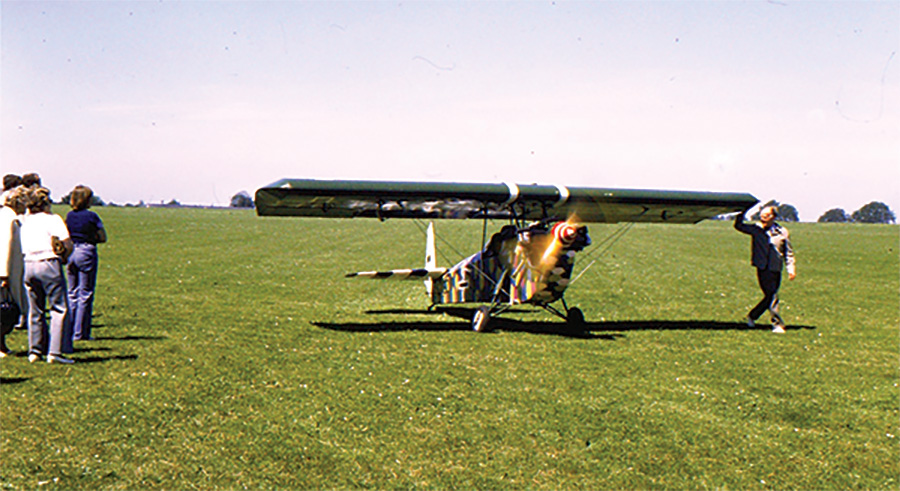 Eric Clutton taxiing FRED on the grass at Sywell airfield in the U.K. in July 1977.

In 1969 Clutton subsequently went on to design the EC.2 Easy Too, a low-wing version of the FRED with a belt-reduction-drive 1500cc VW. This was left part-finished in the U.K. when he emigrated, but was badly stored and has since deteriorated. Then in 1978 his EC.3 Special, a faster more streamlined version of the EC.2, was designed. Neither of these was completed, even though the registration G-CLUT was obtained for the prototype EC.3. 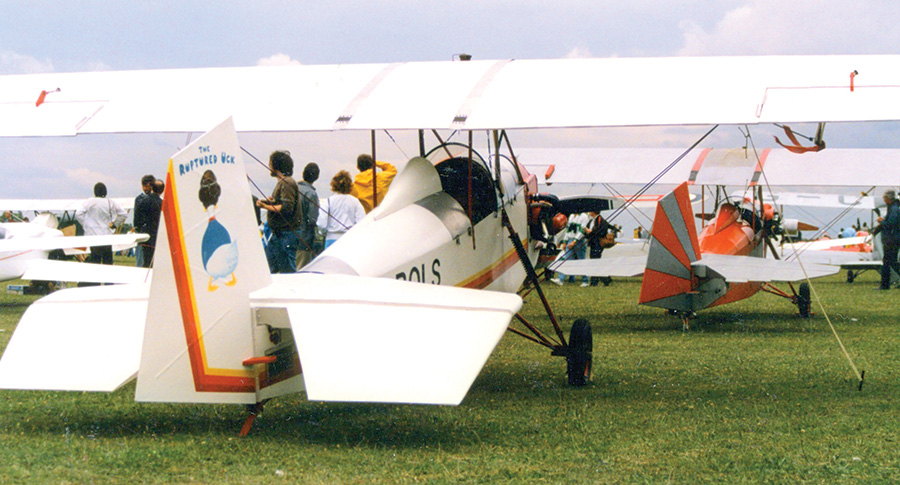 Two FREDs at the annual homebuilders rally at Cranfield, U.K. in 1989.

Billie and The Fred Baron

On his visits to the PFA (Popular Flying Association) fly-ins at Sywell, the WW-I camouflage that he applied to FRED got visitors and enthusiasts referring to Clutton as “The Fred Baron.” He certainly succeeded in bringing the fun to recreational flying at the time.

FRED has been well known since arriving in the USA, with Clutton making many dusk aerial forays around the airfield at Tullahoma in the calm evening air. Rather than folding the wings and towing, Clutton preferred to keep FRED in one of the airfield hangars. He was often seen with Billie, his pet budgie (parakeet), on his shoulder on the airfield at Tullahoma, and occasionally when Clutton was flying the Luscombe, Billie would come along in the cockpit. Even though Billie goes everywhere with Clutton, flights in FRED for the two of them were too breezy, and Billie remained grounded! 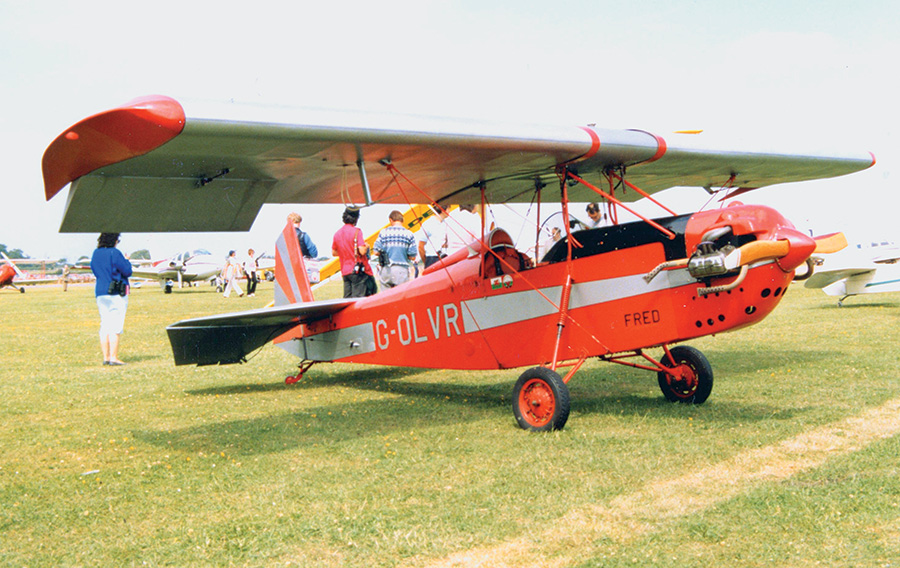 Appropriately registered by builder Tony Oliver, G-OLVR is fitted with a VW conversion plus has an elongated nose.

From the beginning, Clutton wanted FRED to be easy and economical to build, and safe and easy to fly. It’s a simple recreational aircraft that a reasonably experienced glider pilot can fly without further training. Clutton is happy he achieved his goals, and further claims that the design is almost unstallable.

The spring trim enables FRED to be flown hands off. It is a very stable aircraft and not really sensitive in pitch or yaw. Clutton recalls one 90-mile cross-country in FRED when “the ailerons were not operating, yet I was able to complete the flight safely and without incident.” He also notes that takeoff and climb performance is entirely dependent on power, but since fitting the Continental A-65, a usual climb rate of 700 fpm is to be expected. 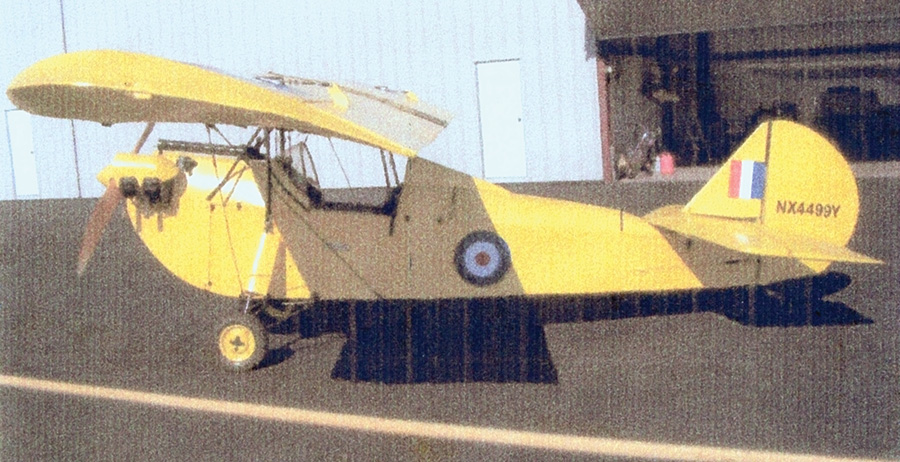 Registered in the USA now, NX4499Y at Tullahoma in its most recent guise, an RAF training yellow color scheme. 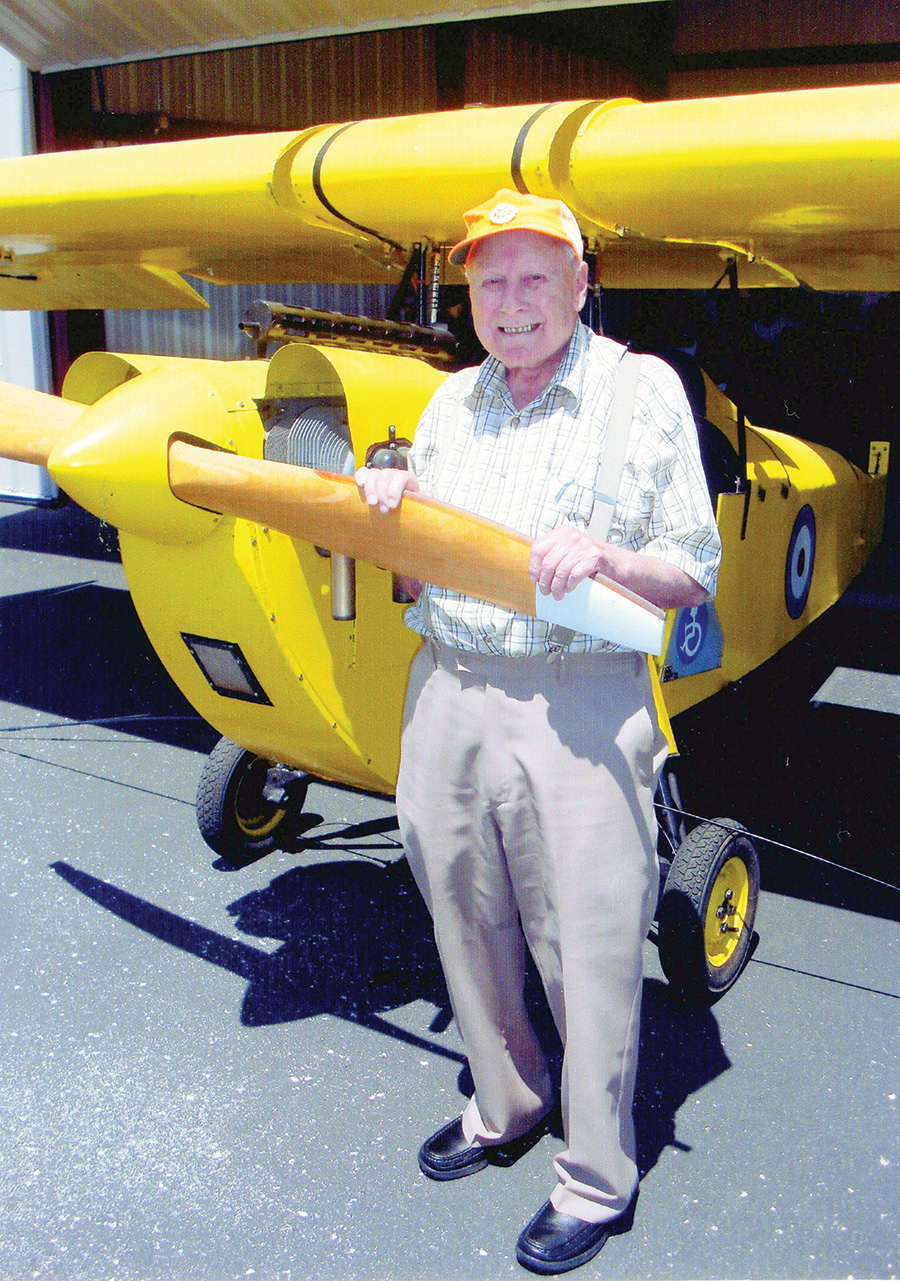 Eric Clutton with his beloved FRED just before its sale and departure to Florida.

Between the date of the prototype’s first flight and the present, Clutton has sold over 600 sets of plans. He has documentation that worldwide, at least 60 FREDs have been completed and flown in the U.K., Australia, Canada, New Zealand, and the United States, although he has no idea of how many are currently flying in the U.S.

Clutton will still sell you a set of plans and provides advice by email. He also points out that in the U.S., FRED can be flown as an LSA without a medical certificate.

Clutton is sad to have had to sell the prototype FRED, but told me, “I can no longer prop him off-no electric starter-and aeroplanes don’t like to be neglected. I’ve had FRED over fifty years and have had great enjoyment with him.” Reflecting on his time at Stoke in England, he said, “The city still hasn’t raised a statue to Reg Mitchell, the city’s other famous aircraft designer, so there’s no chance that you’ll be seeing a statue to commemorate Eric Clutton!” 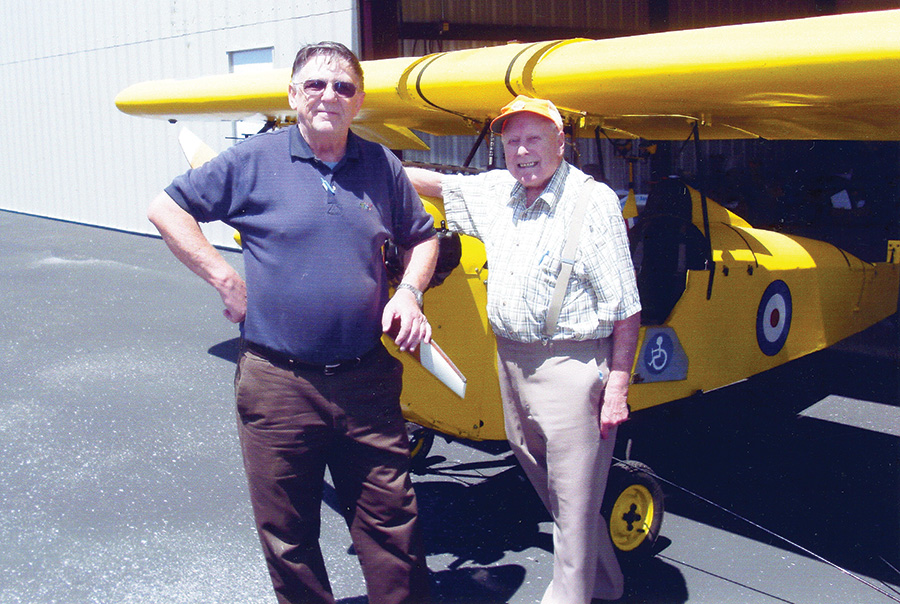 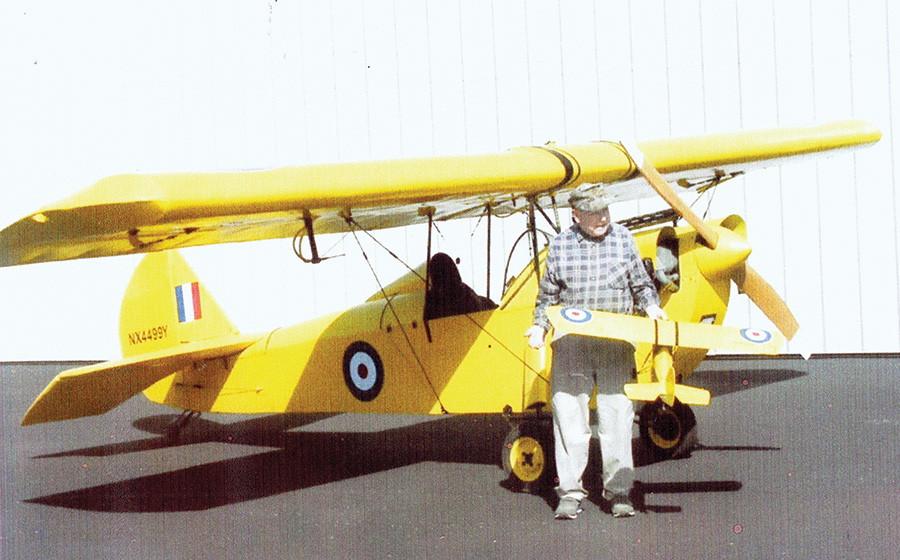 Eric Clutton with FRED and a 1/5-scale RC model he made of FRED at Tullahoma. The real FRED is sold, but Eric will keep the RC model as a momento.

With grateful thanks to Eric Clutton for his help with this article. Contact details: Eric Clutton, 913 Cedar Lane, Tullahoma, TN 37388-3167, USA. Email: doctordiesel@cafes.net. Additional information can be found at: http://cluttonfred.info.

Paul Dye - July 27, 2012
0
There are so many ways to try to keep the weight down in a homebuilt project, but some are better than others.

Kit Stuff: Genesis of a Project